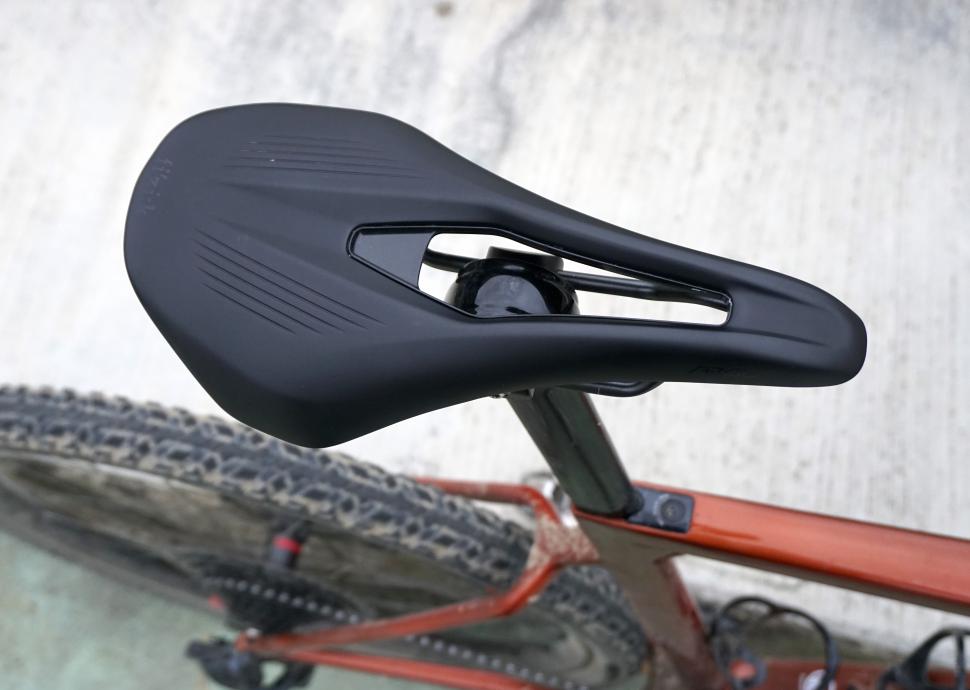 Fizik pioneered long saddles with the Arione in 2002, but now it is playing catch up with the short-nosed stubby saddle trend with the recently launched Argo. I got the chance to put the new saddle through its paces in the Jeroboam gravel race at the weekend. We’ll have a full in-depth review in due course once Mat Brett has clocked up some serious mileage on it.

Looking back through the decades of cycle racing it’s interesting to see how saddles have evolved. Part fashion, part innovation, but few people are probably riding the same saddle they did 10-20 years ago. In 2002 the Italian saddle company shocked the cycling world with its Arione saddle, which was longer than any other saddle at the time. It was designed for two-time Giro d’Italia winner Gilberto Simoni who wanted a longer saddle to provide a wider range of sitting positions for dealing with steep climbs. Suffice to say, it’s been a huge success. 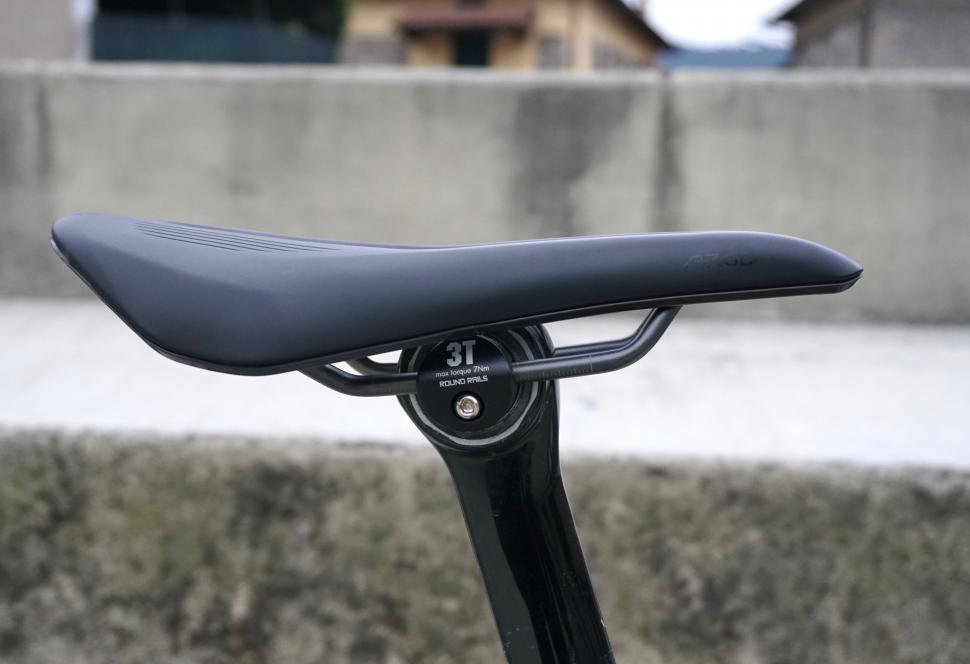 Now we’re seeing a shift towards short stubby saddles, the sort of which only used to be seen on time trial bikes. It’s fair to say Fizik has been caught out by this trend but at Eurobike recently, it launched its response with the new Argo. The idea of a short saddle is that it fixes your position, quite the opposite to the Arione, with more support and better weight distribution.

The new Argo is short, just 265mm compared to 302mm for the Arione, with a blunt nose and wide wings. But it’s not the shortest, it’s one of the longer short-nosed saddles. For comparison, a Prologo Dimension Nack is 245mm and the Specialized Power is 240mm.

There are two variants of the Argo. The most distinguishable difference is that the Tempo has a flatter nose profile, along with softer padding. It’s designed for a more upright riding position.  The Vento has a dropped nose with firmer padding and is designed for more aggressive positions with a greater degree of pelvic rotation. 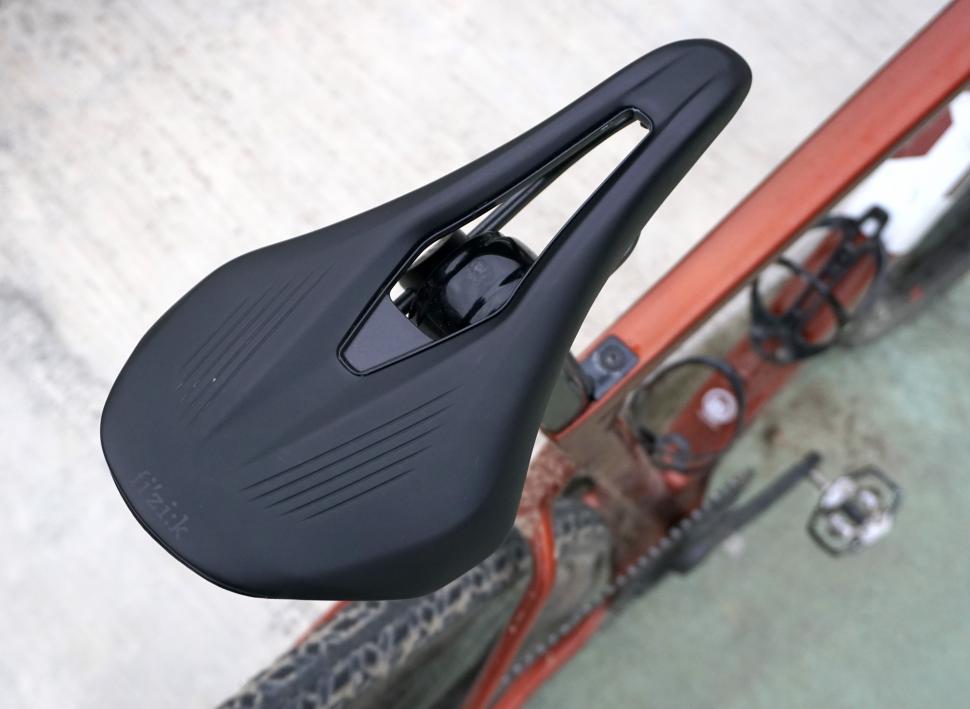 Each saddle combines a carbon-reinforced nylon shell with Fizik’s proprietary foam, tuned to the different riding styles each is designed for, with a choice of carbon or metal rails.

I was riding the Vento Argo R3. I’ve become a big fan of the Specialized Power saddle, so I was hopeful of getting on well with the Argo. Especially as my first ride was the Jeroboam, a brutally hard gravel race in northern Italy and I had no chance to ride it beforehand. It was with some trepidation that I rolled out of the event village with 150km of mountain road passes, remote forests festooned with mountain bike singletrack and vineyard gravel tracks ahead of me.

Thankfully, I instantly gelled with the saddle and it would prove to be comfortable all day. Stepping off the bike 9 hours later, the only discomfort was my lower back. I was relieved, but it shows both that I’m adaptable to different saddles, and that Fizik has got the shape and padding spot on.

The saddle shape helps lock you into a comfortable position. The kicked-up tail helps keep your sit bones in the optimum location, and you can use it to push against on very steep gradients when your pedalling cadence drops to 50rpm. The saddle is a bit longer than the Power, which I've ridden a lot, and on some very steep and loose climbs, the extra length appeared to help. I was able to pull right forward onto the nose to keep weight forward over the front wheel.

Padding is firm but adequate for providing cushioning after many hours and being pounded over rough terrain. There’s also a choice of widths, 140 or 150mm to suit preferences. All saddles have a central relief channel, just like most rival stubby saddles. 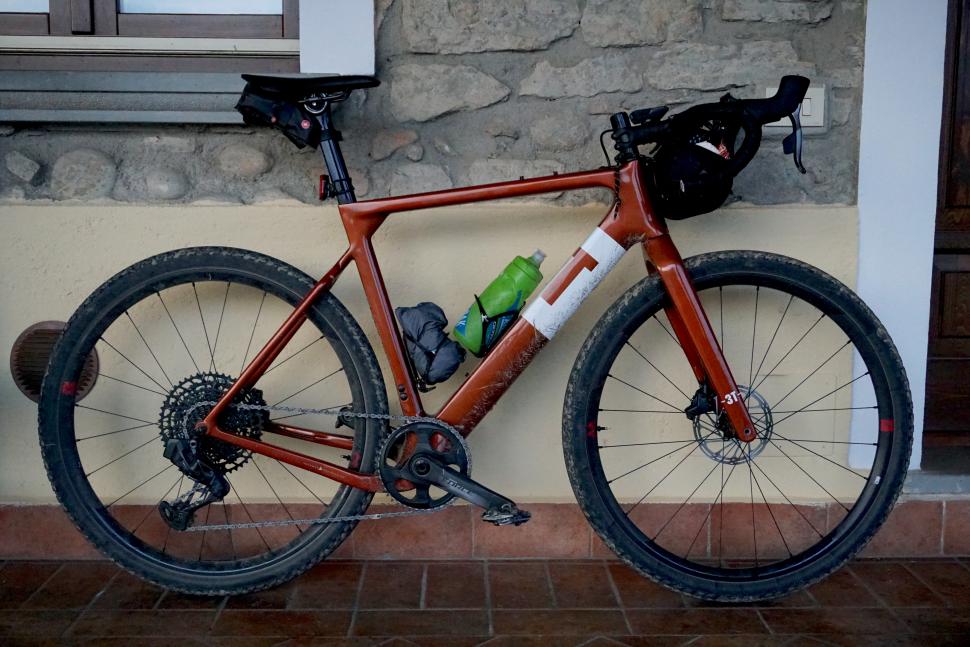 The Argo might be designed for road riding and racing, but after a day of pounding around Italy’s hardest gravel tracks, mountain bike singletrack and cobbled roads, I’d say it’s a good choice for all-road, adventure and gravel bikes too.

Prices start from £129.99 for the R3 and go up to £184.99 for the posh R1 version. The main difference is carbon rails, and hence less weight, on the R1 model. The R3 model pictured above has Kium hollow rails.

We’ve got a full review of the new Fizik saddle coming soon. More info at www.fizik.com