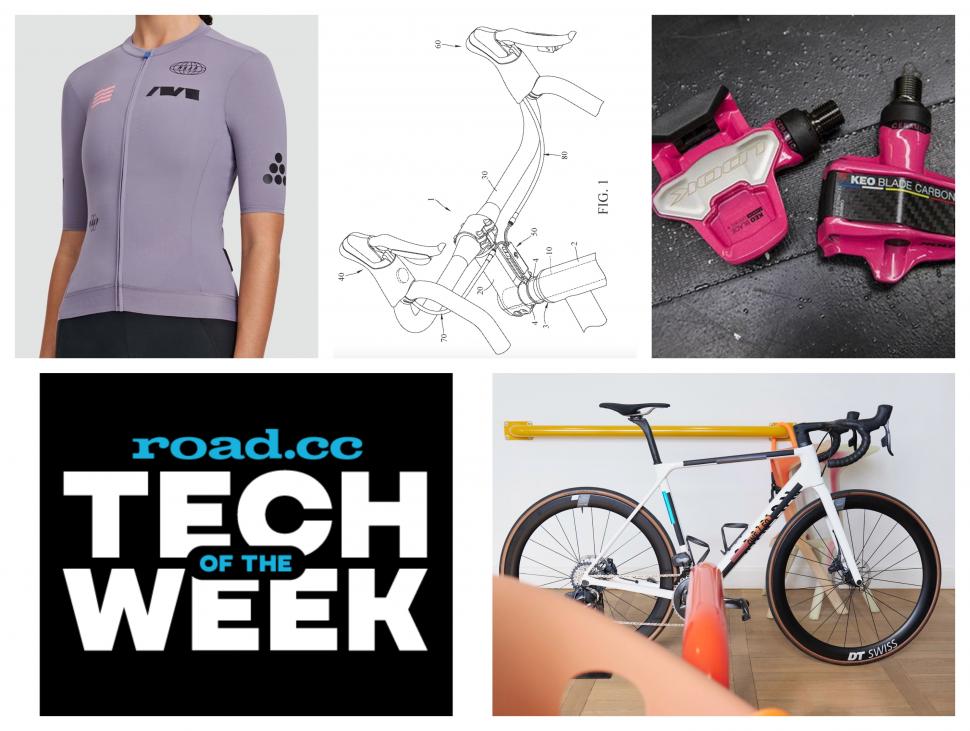 Could a new electronic groupset be coming soon? Plus new stuff from Look, Canyon, MAAP, Smith, and loads more

We have loads of cool new stuff to tell you about from brands including Look, Canyon, Gaerne, MAAP, but we're starting this week with indications that a new player is working on electronic shifting for road bikes...

Is Tektro about to disrupt the electronic groupset market?

The three major groupset brands – Shimano, SRAM and Campagnolo – already offer electronic shifting, as do a few others like FSA and Rotor, but it looks like a new system could be on the way from Tektro.

Tektro and its high-end sub-brand TRP (Tektro Racing Products) are best known in the mountain biking world, but a recently published patent application suggests that it is working on an electronic groupset for the road. 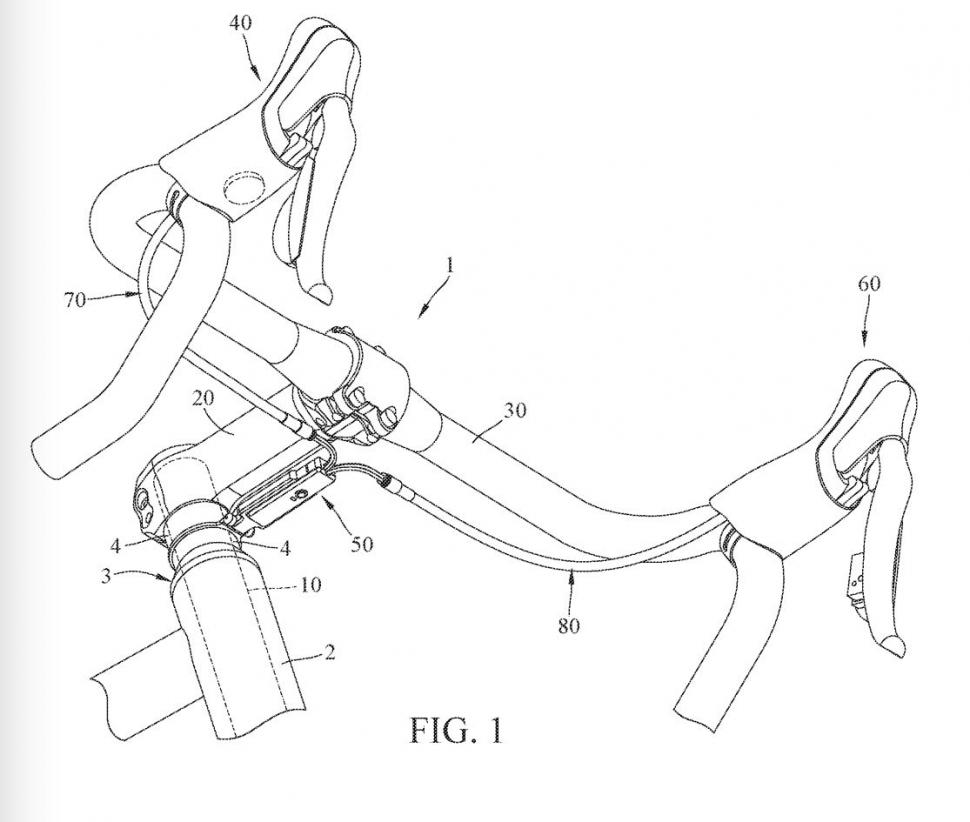 One patent application for a Bicycle Head and Bicycle Shift Control Box, for example,  mentions a ‘brake lever assembly’ for a drop-bar bike that incorporates a shift switch and a battery. These are connected to a shift control box that includes a circuit board that has a wireless transmission unit. 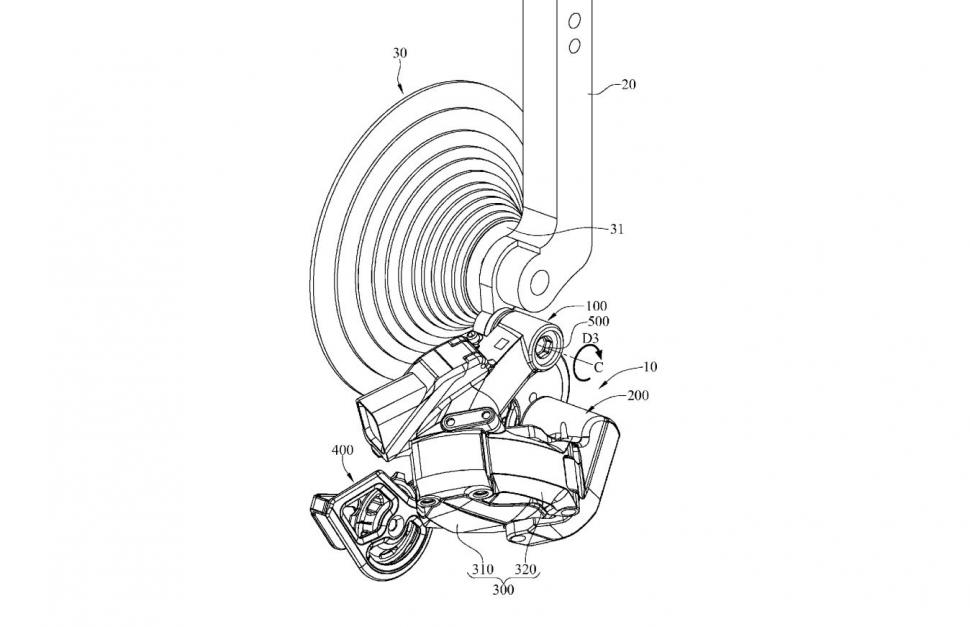 There’s also an older patent application for front and rear derailleurs, each of which is powered by a battery.

Yet another patent application, shows a combined hydraulic brake lever and electronic shift device. Signals from two shift levers are transmitted, either via wire or wirelessly, to an electronic shift control box which in turn will operate the bicycle derailleur. Again, this could be in a wired or wireless manner. 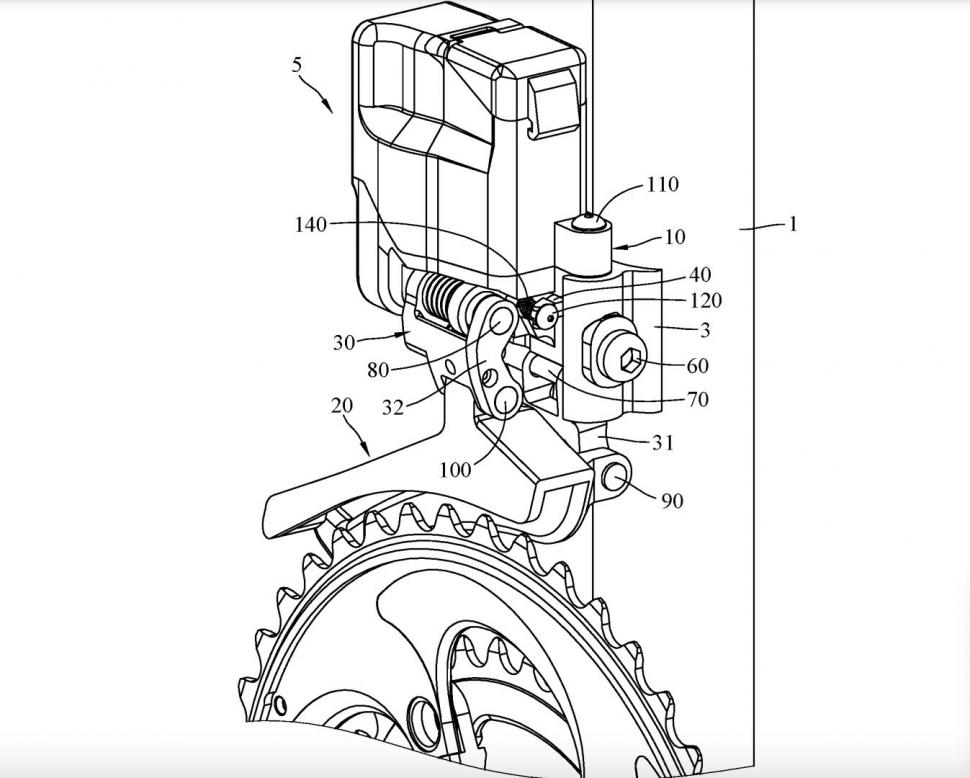 Patent applications are also published for wirelessly pairing components and a “Method of Controlling a Derailleur in Low Battery Remaining Capacity” suggesting that Tektro’s plans for an electronic shift system are at an advanced stage.

As ever with anything concerning patents, we can’t say for sure whether Tektro will bring an electronic shift system to market, but we’d say that it’s looking likely. 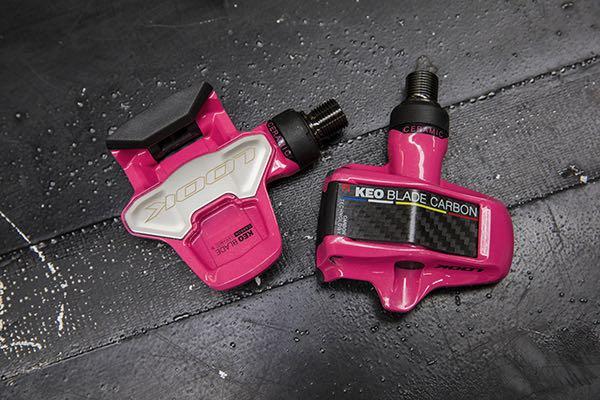 Look has produced Keo Blade Carbon Ti pedals in pink, but they’re not for the likes of us – they’re for the rider who wins the Giro d’Italia.

The pedals have a contact surface of 700mm2, ceramic bearings, and a weight of just 190g per pair.

Look says that it supports 40% of the riders taking part in this year’s Giro.

You can’t buy the pedals in this finish – they’re for the wearer of the Maglia Rosa (pink jersey) only – but a pair in black is priced at £299. 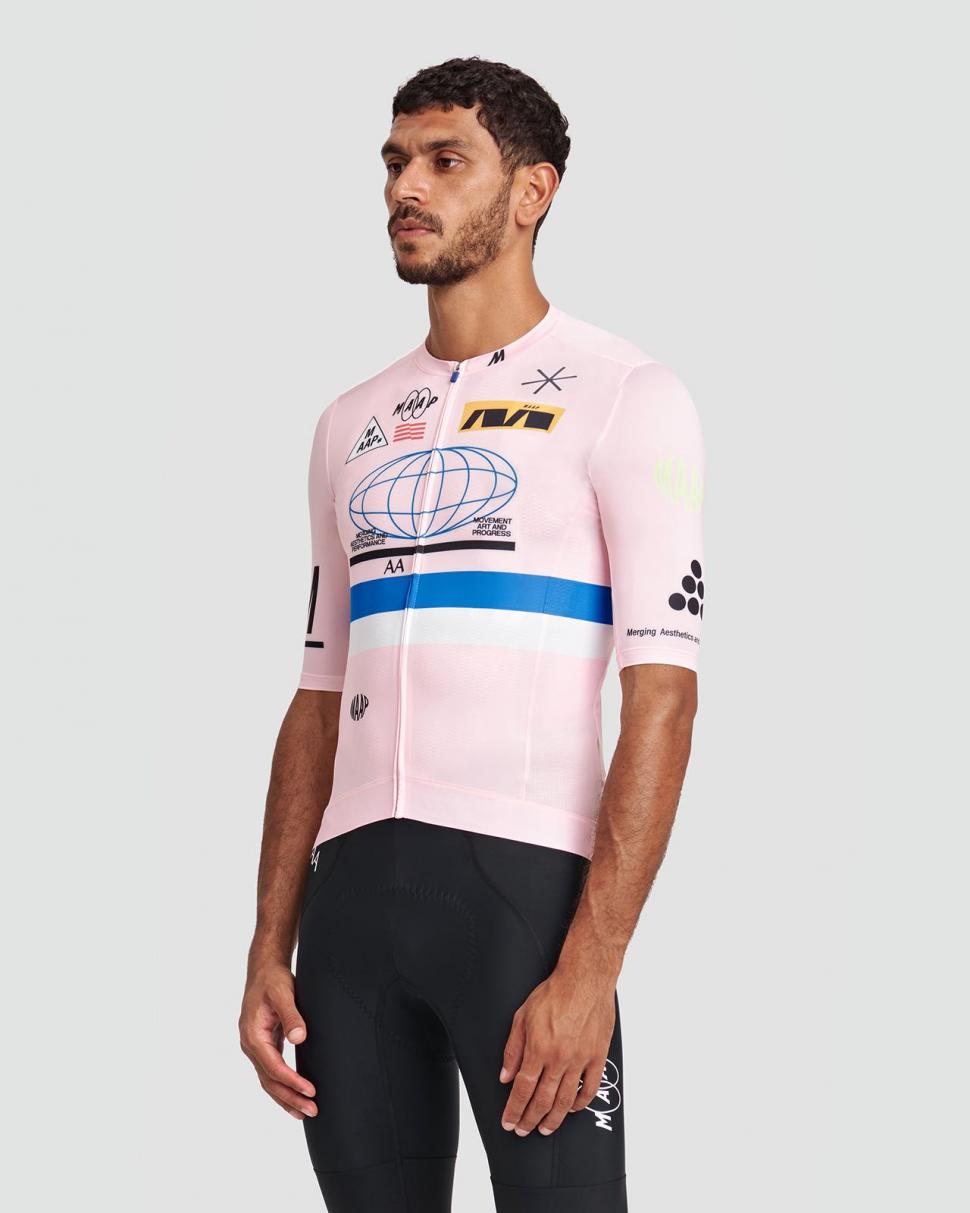 Barely a week goes by without us hearing about new designs from MAAP – those Aussies never stop – the latest being the Axis (above) and Fuse (below) collections. Both offer men’s and women’s versions of MAAP’s Pro Jersey (£140), along with various other items. Axis also comes in long-sleeve options (£150). 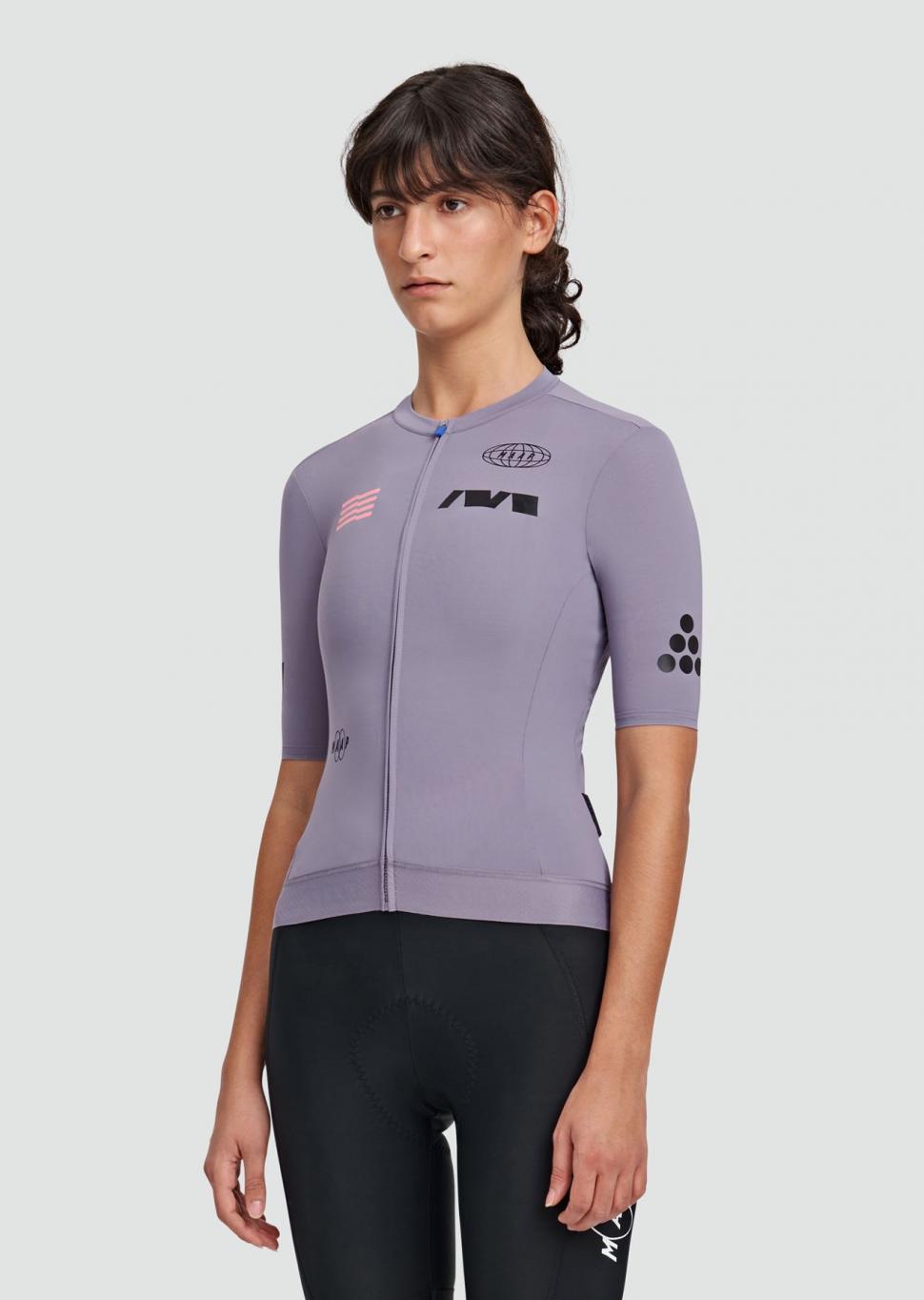 “Each jersey is made from majority recycled yarn in a combination of three materials to maximise its breathable, lightweight and moisture-wicking qualities,” says MAAP. “The three rear pockets also feature an anti-sag material to keep all your essentials locked down for the ride.” 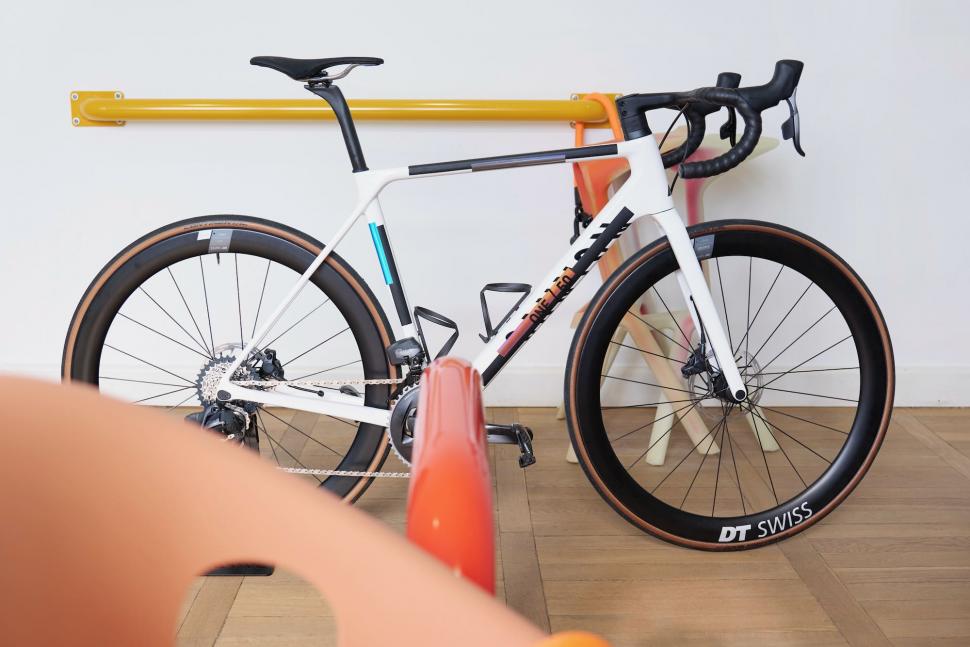 Canyon this week introduced the latest in its Ultimate Artist Edition range – which, it says, “blurs the boundaries between world-class speed and stunning style, combining the Ultimate's race-proven performance with artwork from renowned designers” – and it promptly sold out.

The new model is an Ultimate CF SLX 8 Disc LTD in a finish created by Berlin-based industrial designer Konstantin Grcic. Many of his works are part of the permanent collections of major design museums around the world, including the MoMA in New York and the Centre Georges Pompidou in Paris.

Canyon says, “The Ultimate CF SLX 8 Disc LTD looks like no other road bike out there, with iridescent elements that shimmer In the light. The highlight: each rectangular special effect decal creates constantly changing reflections – their appearance shifting depending on the viewer’s angle.”

Only 50 of these were made and they’ve all gone already. Sorry. 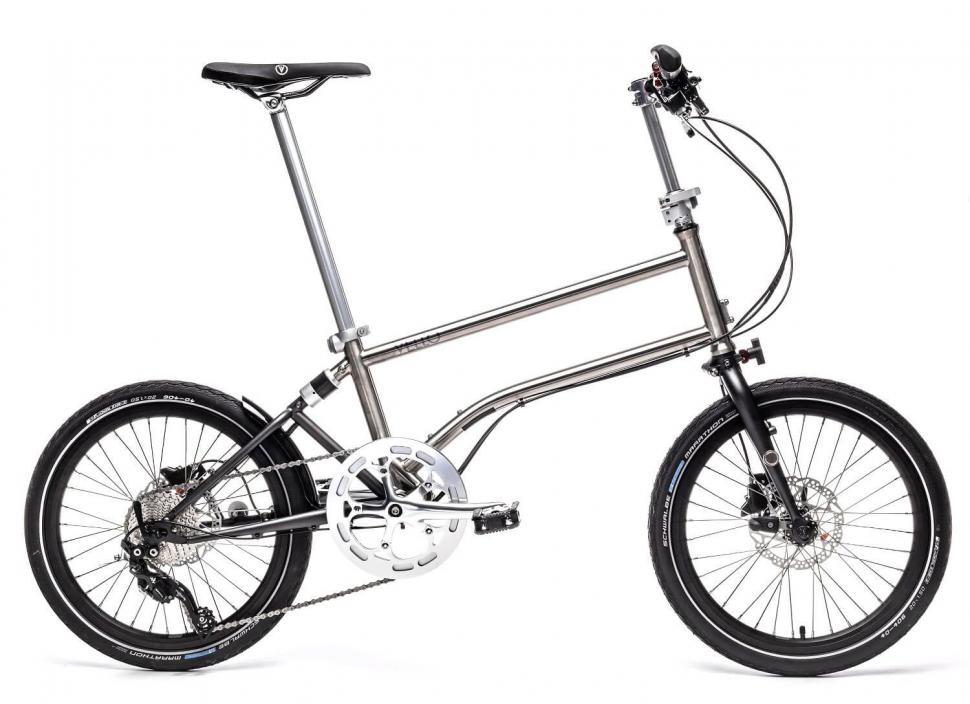 Well, this looks fun. We covered Vello a looooong time ago when its Bike+ self-charging electric folding bike hit its funding target on Kickstarter and now we’re trying to get something from the range in for review on road.cc

Don’t want to jinx it but we’re pretty confident that we’ll have a Vello with us soon. We’ll keep you posted. 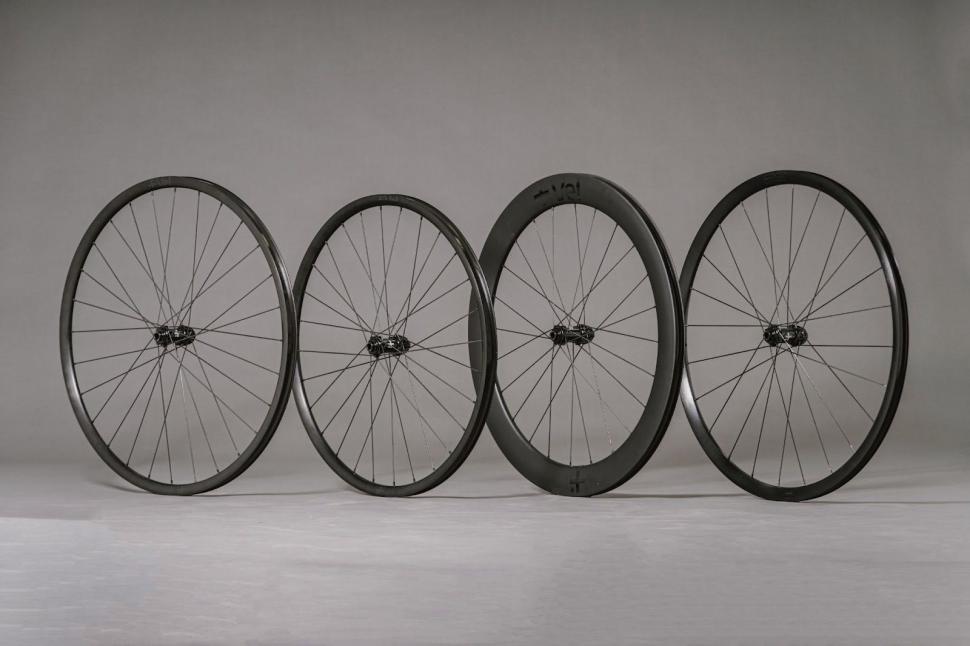 From Vello to Vel. We just need Vielo to rock up to make it even more confusing. Anyway, Vel has announced the addition of six new wheelsets to its range, including the 23 GRL gravel-specific wheelsets (£399) available in both 700c and 650b sizes.

“The wheels retain the strength required to deliver reliable performance off-road thanks to the carefully selected Pillar Wing PSR23 straight-pull spokes,” says Vel. “The 102 tooth engagement ring of the Vel Rapid Engagement hub not only offers lightning-fast pick-up, but it sounds great too.”

Vel describes the 60 RL carbon tubeless disc wheelset (£749) as “a rapid, reliable and great value choice for riders wanting to maximise their speed on flatter courses.” As with the other wheels mentioned here, the number in the name refers to the rim depth in millimetres. Vel claims a weight of 1,690g.

The RSL2 wheels have DT Swiss hubs and Sapim CX-Ray spokes whilst the RL wheels use Pillar Wing spokes with proprietary hubs and all models get brass nipples for durability and ease of maintenance.

Sweden’s Poc has a City and Commuter collection of cycle clothing that includes the Motion Rain Jacket (£220) in men’s and women’s cuts. 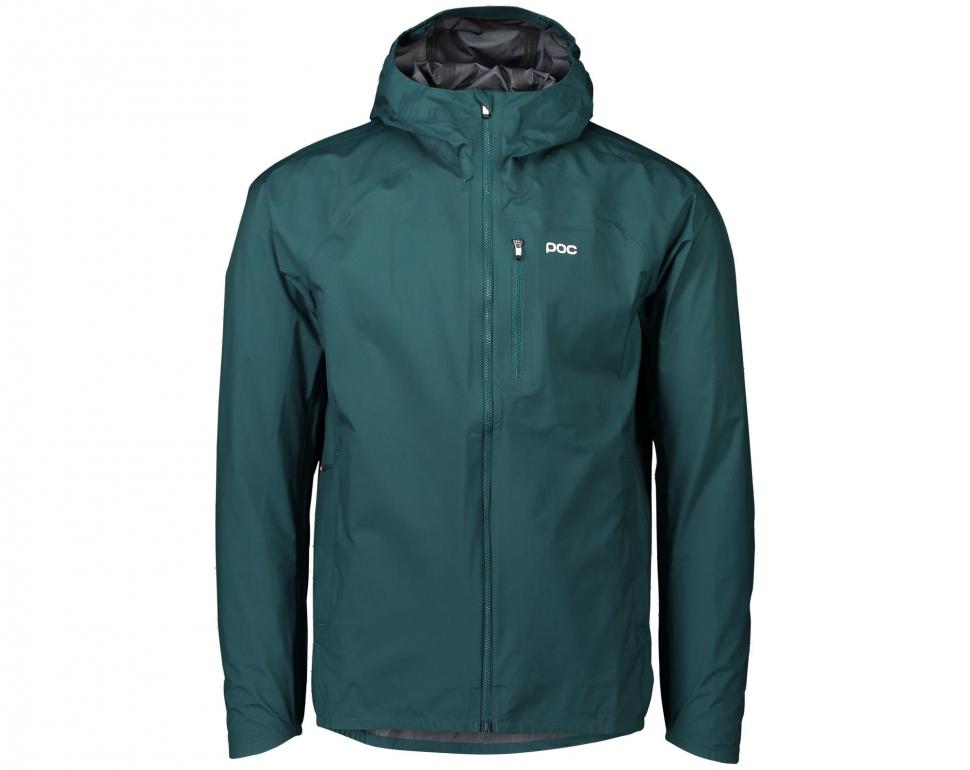 It’s a 3-layer waterproof polyester with ripstop and it has a DWR (durable water repellent) treatment. The hood is designed to be worn under a helmet. 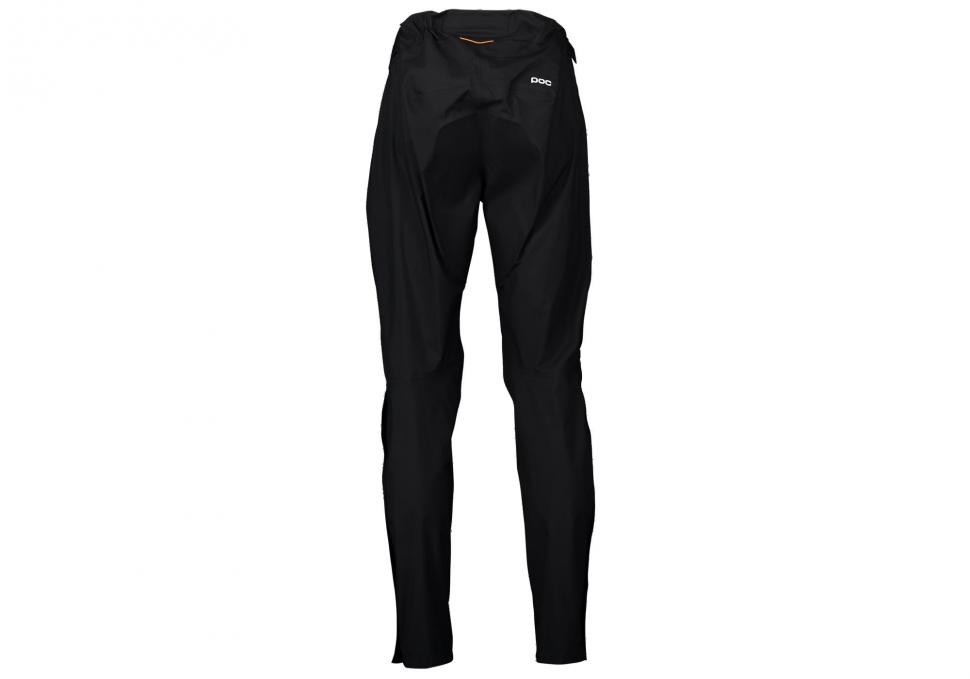 The Men's Motion Rain Pants (£160) use the same materials and feature zippers stretching to the knees to make it easy to get them on over shoes. 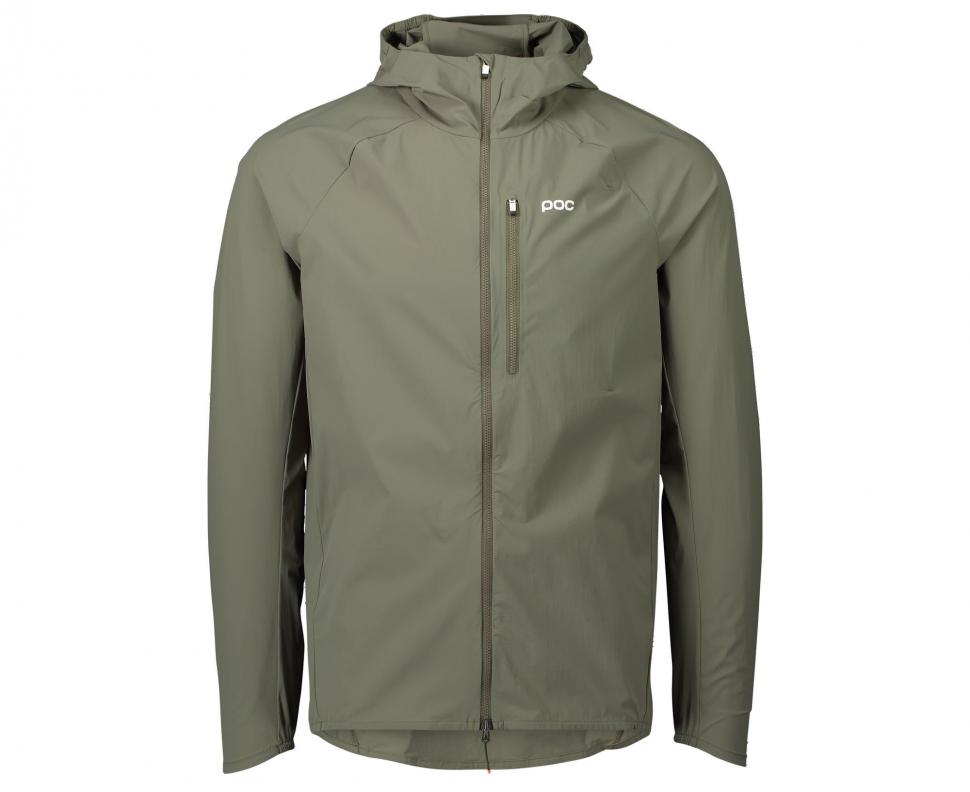 The Men's Motion Wind Jacket (£125) is designed to be lightweight, windproof, and highly breathable. It uses a four-way stretch material that’s said to be splashproof.

You can check out the complete range and buy directly from Poc’s website.

The sole is “made of nylon enriched with carbon to grant optimum rigidity”, according to Gaerne. It has five air vents and is suitable for three-bolt cleats. Cleat position options have been increased by 9mm compared to the previous sole.

Available in Matt Red, Matt Black, and Matt White, the Gaerne G.Sprint is priced at £124.99.

These are the entry-level option in Gaerne’s road range. We’ve not reviewed any of Gaerne’s more affordable shoes on road.cc recently but we were impressed by the high-end Carbon G.STLs last year. Mind you, they’re three times the price of the G.Sprints. 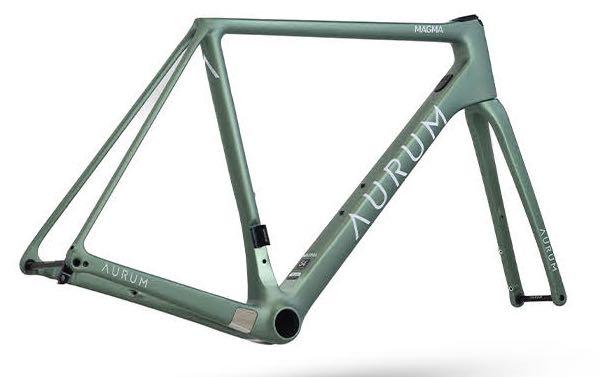 Aurum Bikes, the brand created by mega-successful pro riders Alberto Contador and Ivan Basso, is offering its Magma road racing bike in a couple of new colours: Dolomite Pink and Dolomite Green. The colours are intended to represent the Italian mountains, hence the introduction of these two finishes during the Giro d'Italia. 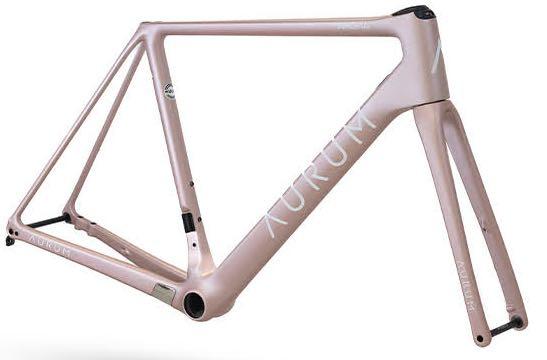 It’s not the biggest news in the world, granted, but we get to show you pictures of a pretty bike so who’s complaining? 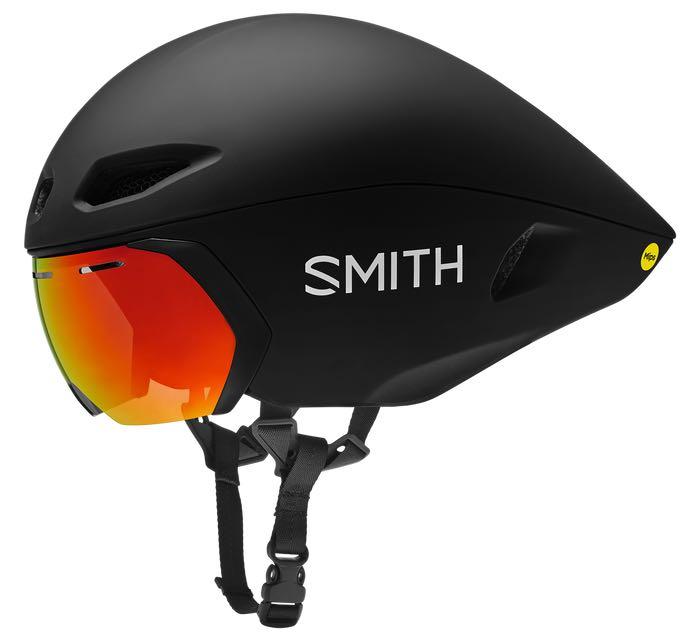 The Smith Jetstream TT helmet that we got a cheeky sneaky peek of at the Sea Otter Classic last month has now been officially launched. We're so ahead of the game, we really are.

The helmet uses EPS foam and Koroyd – a welded tube structure that Smith uses extensively in its helmet range. The Jetstream TT incorporates a MIPS Brain Protection System that’s designed to reduce the transfer of rotational forces caused by angled impacts to the head during a crash.

Find out everything you need to know about MIPS

Smith claims a weight of 410g for a size medium.

We don’t have an official UK price for the Jetstream TT helmet but, as a rough guide, it’s $375 which converts to £300.