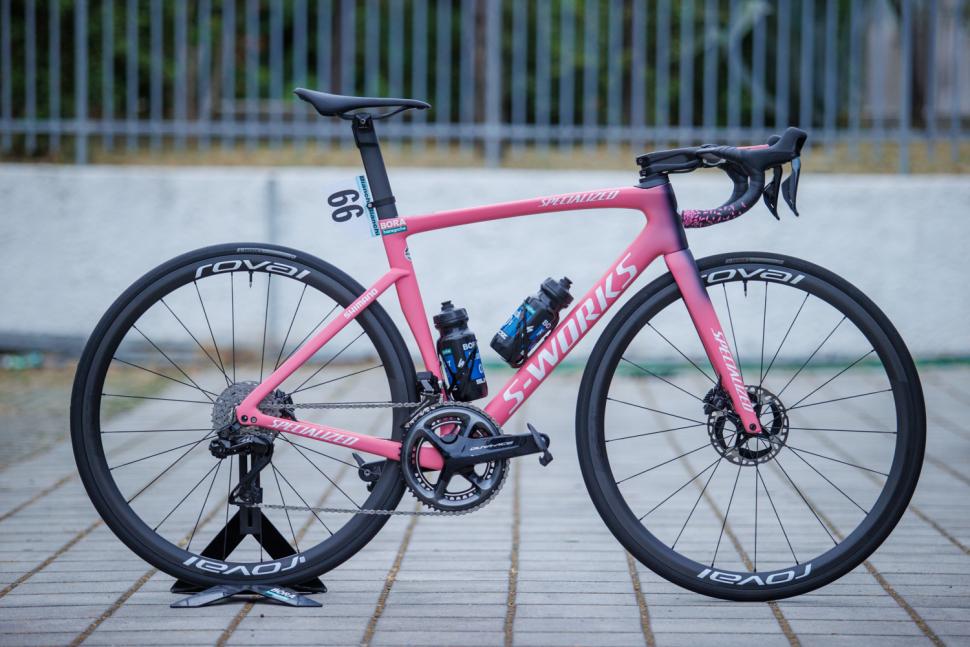 Jai Hindley’s 2022 Giro d’Italia winning bikes: a closer look at the Specialized Tarmac SL7 and Shiv that he propelled to victory

It takes more than a nice bike to win the Giro, but it certainly helps. We take an in-depth look at Jai Hindley’s rather special Specialized rides
by Jamie Williams

Despite the Specialized Tarmac SL7 being a prolific stage winner in recent years, this is somewhat surprisingly its first Grand Tour victory. Like his Bora-hansgrohe teammates, Jai rode the Tarmac for both flat and hilly stages, including on his mighty ride into pink on the penultimate day, and his stage win atop Blockhaus. A Specialized Shiv was the weapon of choice for the two TT stages, with Hindley’s now featuring a rather special paint scheme to celebrate the pink jersey.

> Celebrate the Maglia Rosa with these great Giro-related films

After coming so close in 2020, the 2022 Giro d’Italia was a ride of redemption for Jai Hindley and along the way, he broke a substantial number of records. The first Australian to win the Giro, the first Bora-hansgrohe rider to win a Grand Tour, and the first Grand Tour victory for the Specialized Tarmac SL7. The latter is arguably the most surprising stat, seeing as the bike is no stranger to being on the top step of a podium and is one of the most successful bikes in the pro peloton. 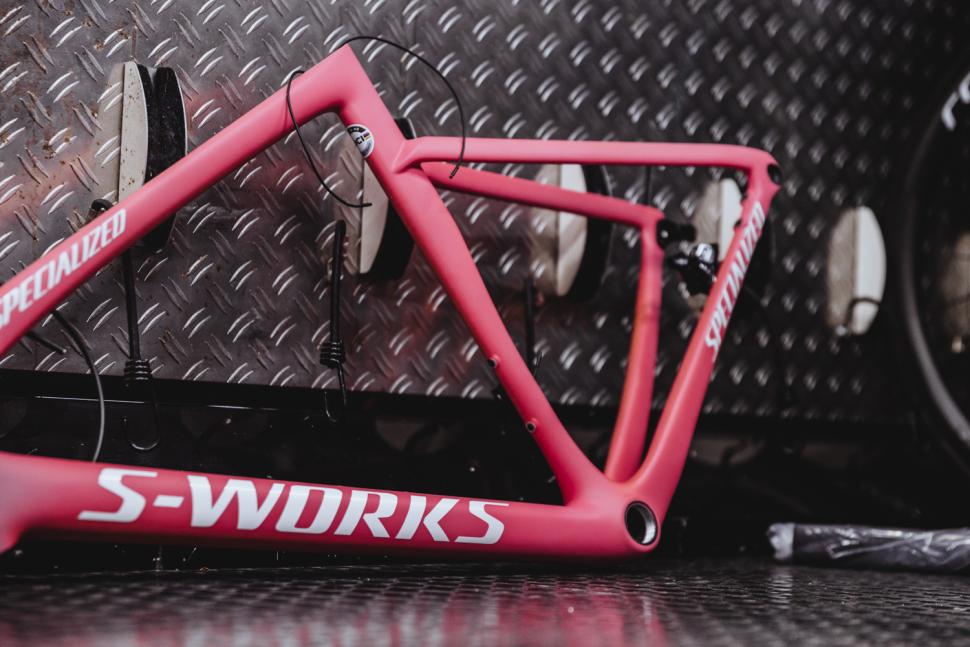 Hindley only pulled on the pink jersey at the end of the penultimate day, and with the last stage being a time trial he didn’t actually get to ride his custom painted pink frame for a full stage. He did get to ride it into the prize ceremony, so we doubt he minded too much...

The Giro is responsible for some stunning bikes, including the Pope’s Pinarello Dogma F12 (yep, you read that right) so we thought we’d take a closer look at the latest Giro special. 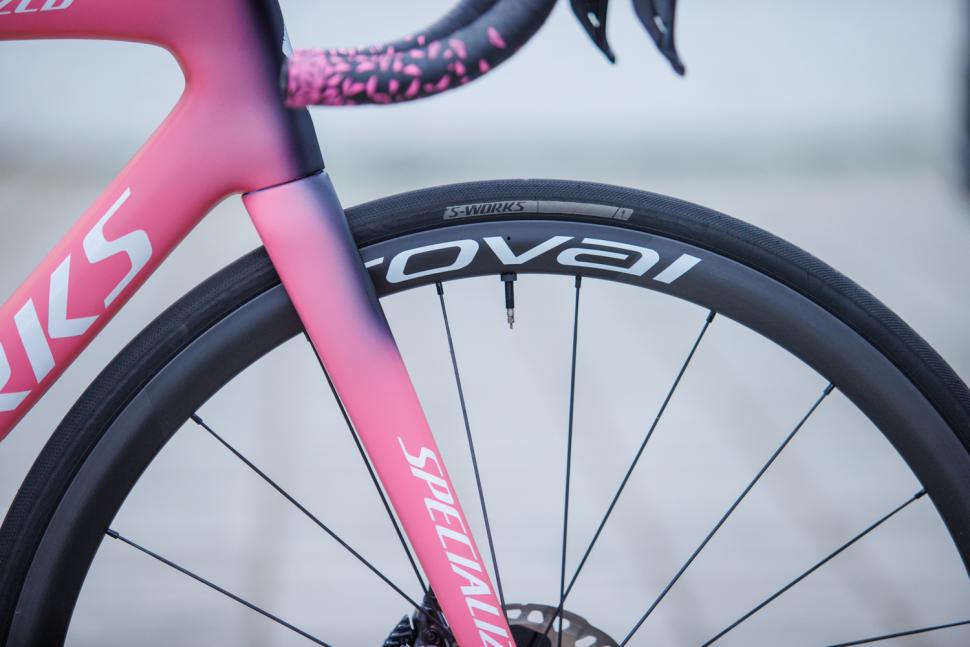 The FACT 12 R carbon S-Works frame features a paint job inspired by the Maglia Rosa, the jersey that has been worn by the leader of the Giro since 1931. It’s kitted out with the recently released Roval Alpinist CLX II wheels, which are set up tubeless with Specialized 'Project Black' tyres. You can’t buy those yet, but we expect them to be released very soon.

Like 13 out of the 18 World Tour teams, Bora-hansgrohe relies on Shimano components for its groupsets, and Hindley’s features a mix of Dura-Ace 9100 and 9200 components.

The majority of the groupset is 12-speed Shimano Dura-Ace 9200 with hydraulic disc brakes being used by Hindley on every stage. The rear derailleur now houses the 'brains' of the system which allows the shifters to communicate wirelessly. You can read our full review of the groupset here: 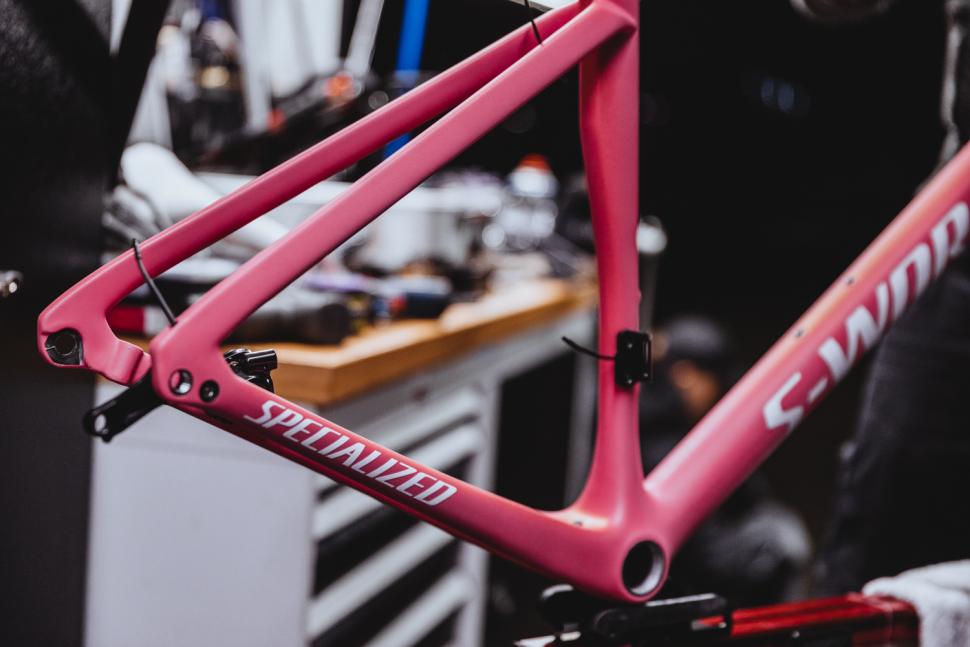 We can see that the Bora-hansgrohe mechanics have fitted the bike with a direct mount derailleur hanger. These can improve the accuracy of shifting by removing the b-link of the rear mech, making the system stiffer.

Interestingly it’s a Dura-Ace R9100P double-sided power meter crankset that’s fitted to the bike. This is an older generation 11-speed crankset, which we think is there either there due to supply issues or the fact it’s a few grams lighter than the new 12-speed one. Here it’s fitted with 53/39 chainrings, and does look more worn than the rest of the components on the bike. 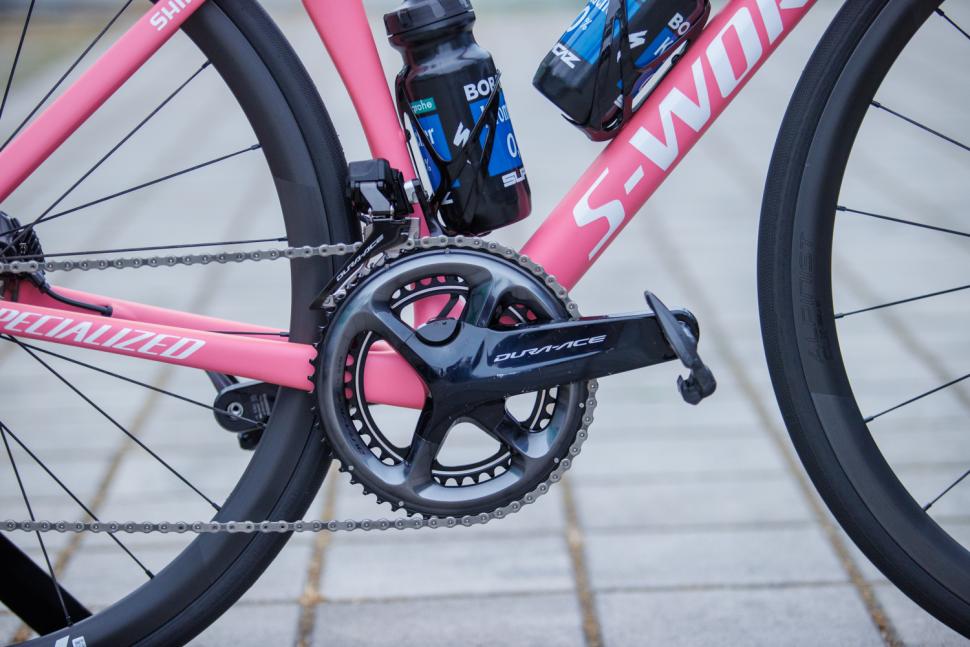 The new Dura-Ace groupsets now come supplied with Shimano MT900 XTR rotors which Hindley uses in a 160mm size at the front and 140mm at the rear. 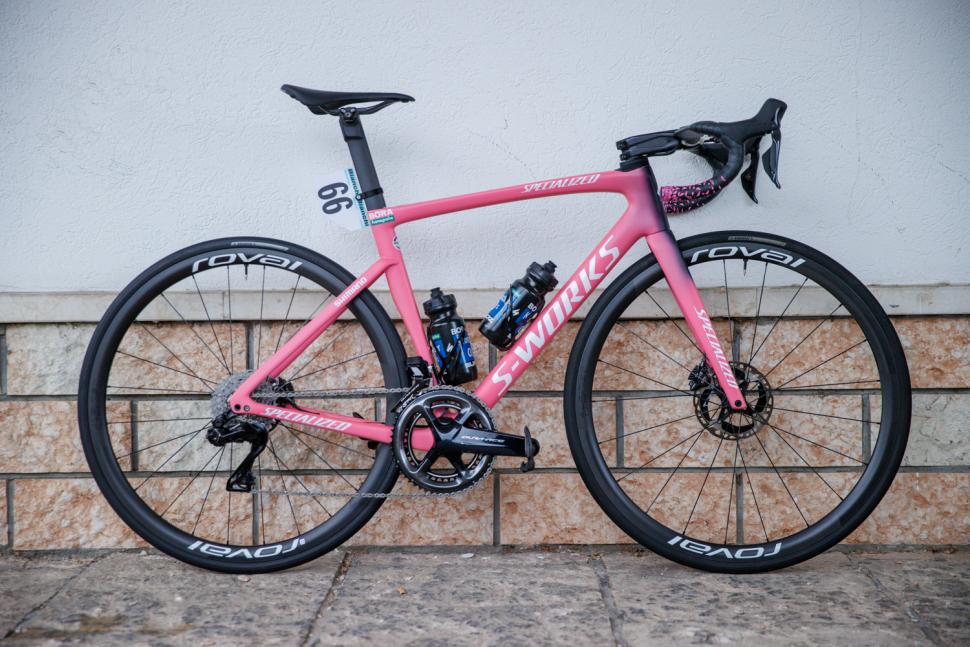 Keeping the team issue bottles in check is a pair of S-Works carbon rib cages, and it looks as though Hindley has gone for the glossy option rather than a matt finish. If you want to match, then they’re a rather eye-watering £70 apiece. Having Supacaz as a team sponsor is rather handy when it comes to getting your hands on some fancy-looking bar tape. Super Sticky Kush Star Fade tape has been used here, a tape also popular with Peter Sagan.

The tape is wrapped around a Specialized Roval Rapide handlebar, but Hindley has opted for a stem by PRO, Shimano’s in-house component brand. It appears to be a PRO Vibe carbon stem which has a similar weight to the SL7 stem, so it’s most likely that fit has swayed this decision rather than performance. The look isn’t as quite as clean as if an SL7 stem had been used; there’s no under stem retention clip for the hydraulic hoses and the spacers don’t transition as smoothly. If anyone has a spare 3D printer, I hear Bora-hansgrohe are in the market for one... 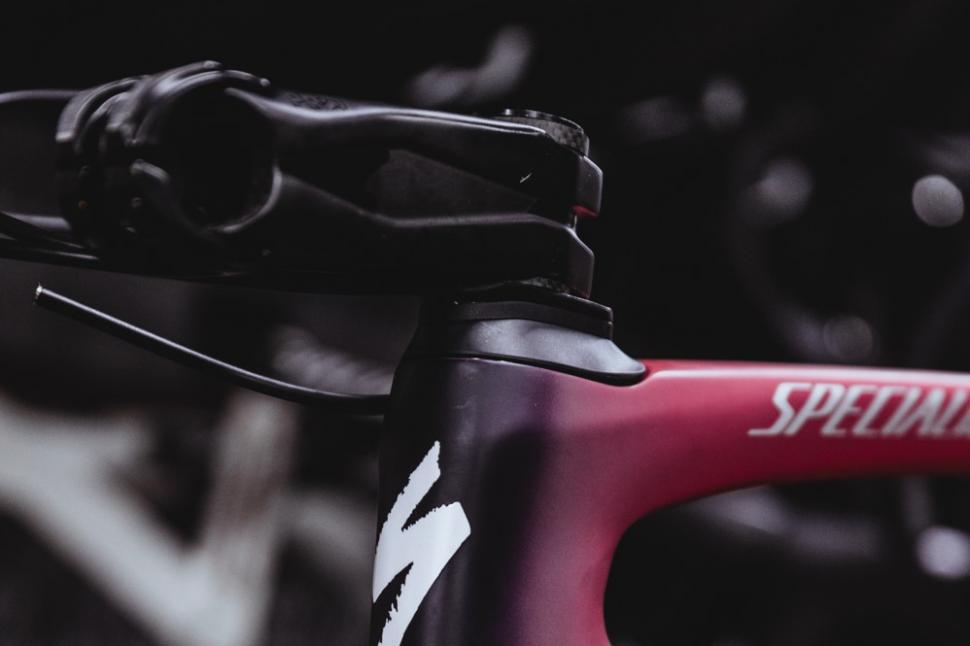 The lack of an SL7 stem means that the integrated out-front computer mount can’t be used, so instead a K-Edge Aero race mount secures the Wahoo Elemnt Bolt II. This features a pink skin, and having tried to install my own (not a pink one unfortunately) I do sympathise with whoever had to fit it. Being a bar with an aerodynamic profile, the out-front mount appears to only just fit next to the stem, with a chunk taken out of the bar/stem transition plugs to accommodate it. 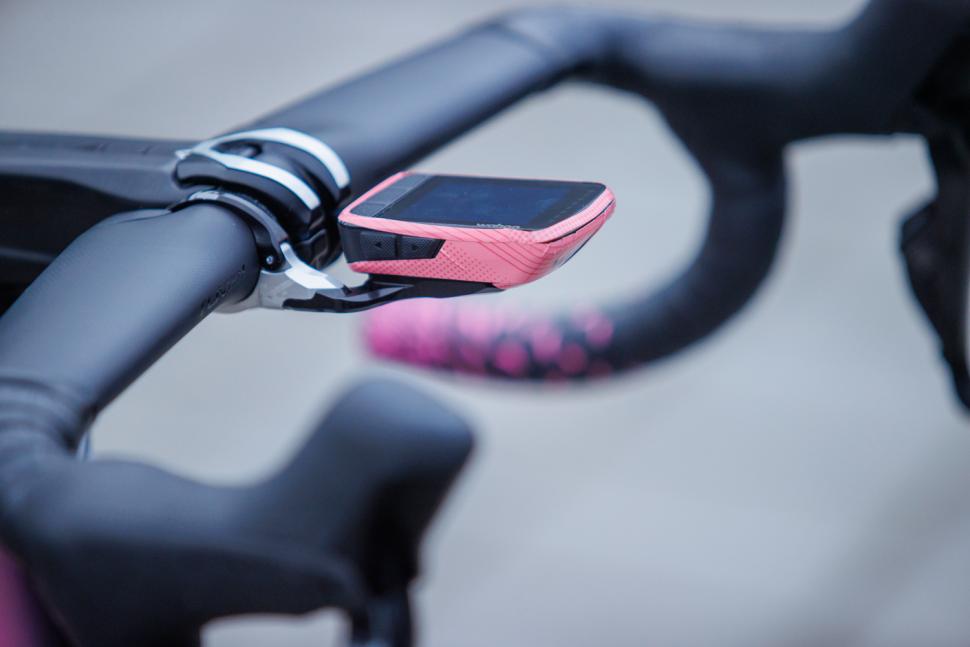 The SL7 has a proprietary seatpost so there are not many options there, but we can see that Hindley has used a 0mm offset rather than the 20mm setback option that most Tarmacs come with. Eagle-eyed readers will also notice that the little rubber sleeve that covers the seatpost bolt is missing. We’re currently debating whether that’s a deliberate act to save approximately 1g, or whether it’s simply just been forgotten. 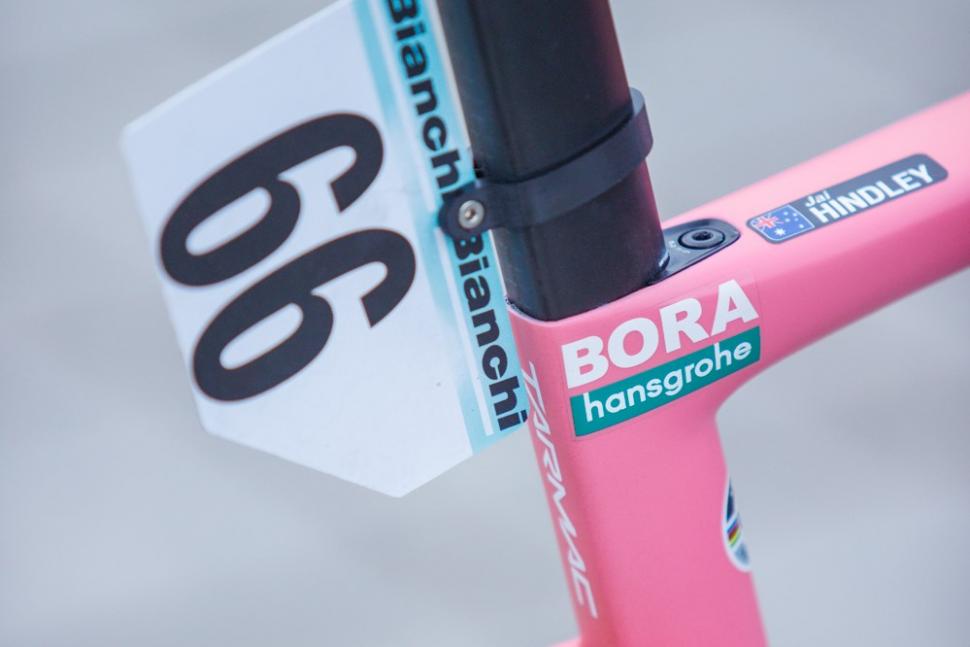 If you’re riding a three-week Grand Tour then the last thing you want is an uncomfortable saddle. Hindley has opted for a Specialized S-Works Romin Evo, which seems to have kept both his bum and his sponsors happy with no need to reach for the black insulation tape or a Sharpie. 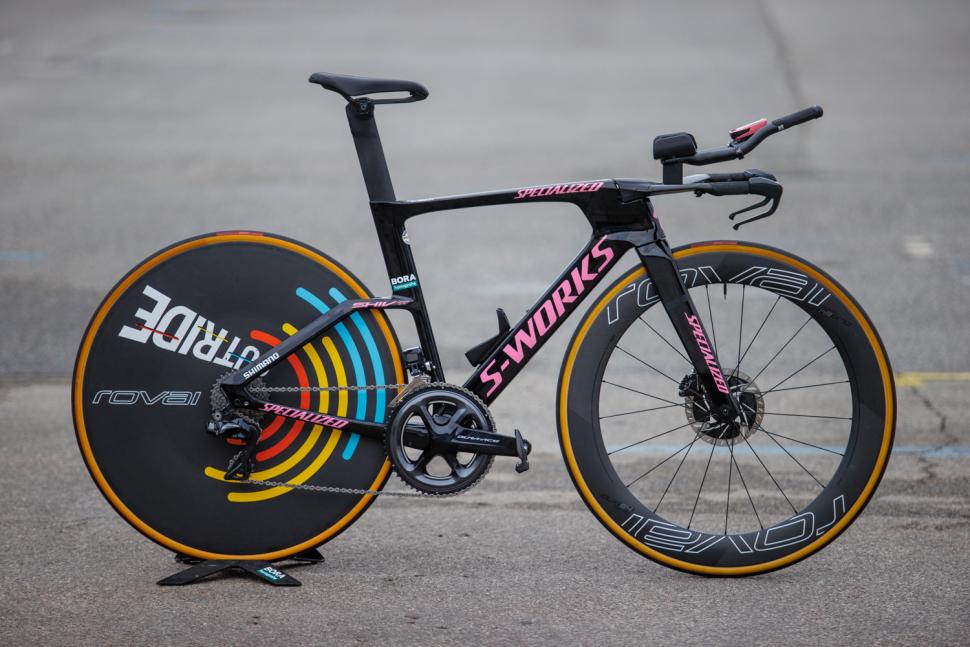 Of course, the Tarmac wasn’t Hindley’s only bike to receive the pink treatment, with his S-Works Shiv TT bike also rolling out of the team bus in Verona starring some additional colour. It would be this bike that carried the smiley Australian to his overall victory, with just about every logo replaced with pink. 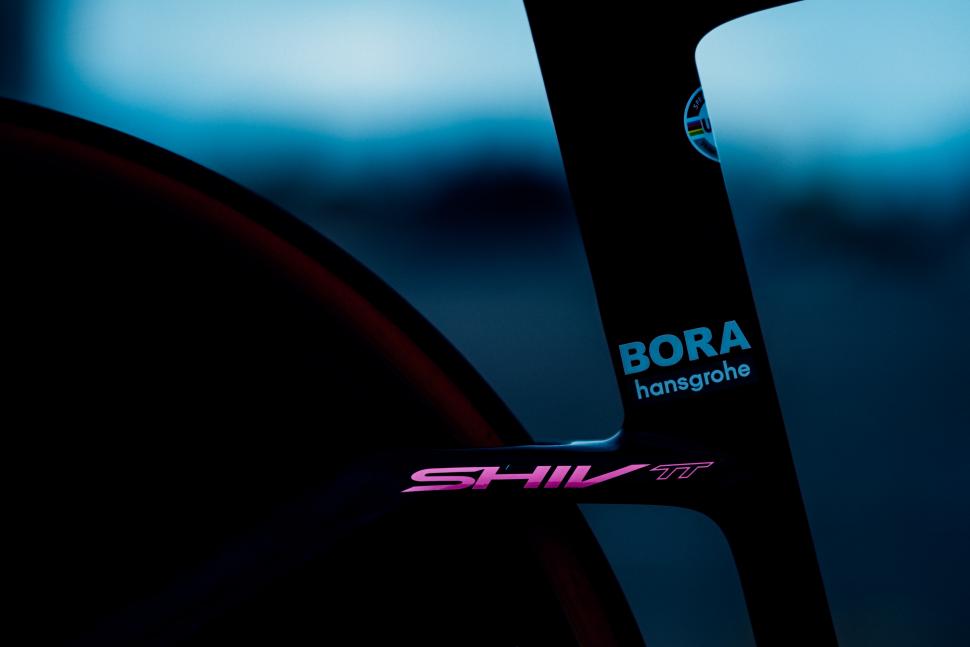 The wheels were once again supplied by Roval with the deepest in the range, the CLX 64, being used at the front and a full disc Roval 321 at the rear. Tubeless valves and 'Project Black' tyres were notable in their absence, with S-Works Turbo cotton tyres being used instead. TT bikes often don’t get the same investment from teams as road bikes, because they simply don’t get ridden as much and weight is less of a penalty. Even for a Giro D’Italia winner this rings true here, with many of the components being the previous generation. The groupset is Dura-Ace R9100 as opposed to the new 12-speed offering, to give one example. 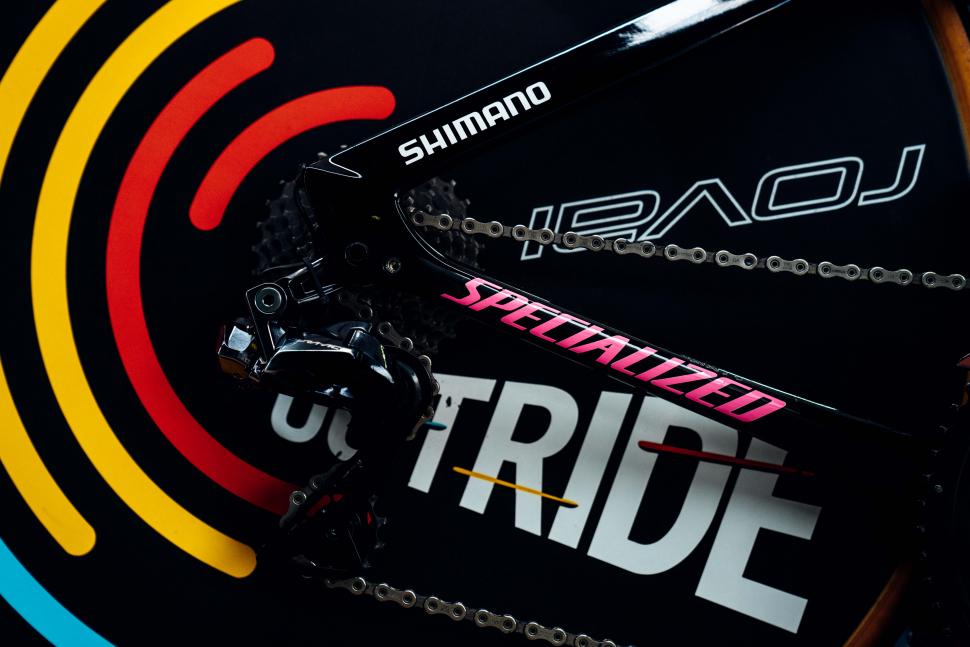 Just like on his road bike, Hindley uses Shimano Dura-Ace R9100 pedals and rides in S-Works Ares shoes, but unlike some other riders there's no sign of any oversized pulley wheel system. Once again, there’s a K-Edge computer mount holding the Wahoo computer and Hindley has forgone the comfort of bar tape opting to simply use grip tape in some key areas to prevent any slipping. K-Edge also supplies the chain catcher; the last thing he wanted was to lose his Maglia Rosa on the final day just like he did in 2020 to Tao Geoghegan Hart. The number one on the back of the seat tube is also a very nice touch.

Judging by Jai’s face as he rolled in Arena Di Verona, these bikes are going to hold a very special place in his heart. Are you a fan of the custom paint job, or would you rather come second and have a golden Pinarello? Let us know in the comments below as always...