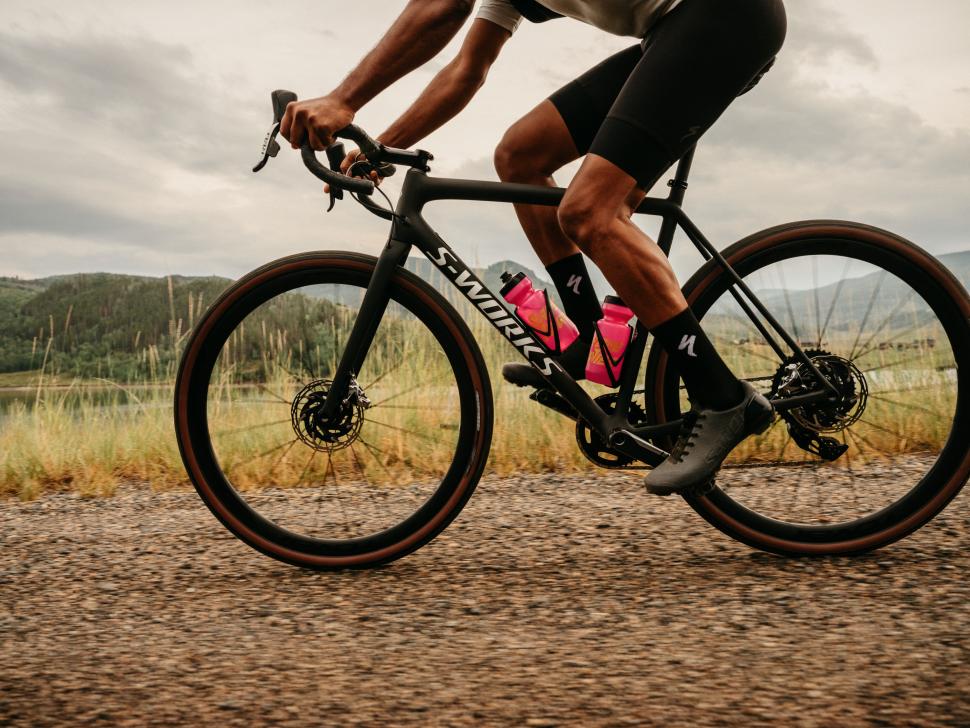 Specialized redesigns the Crux as the “world’s lightest gravel bike”

The frame design borrows heavily from the Aethos road bike, giving a claimed frame weight of 725g. There is space for 47mm tyres too
by Liam Cahill

Specialized is claiming that the redesigned Crux cyclocross bike is now the world’s lightest gravel bike with the S-Works Red eTap AXS build coming in at 7.25kg with 38mm Pathfinder tyres. There’s clearance for 47mm rubber and that, combined with a geometry that isn’t too dissimilar to the old Crux, also makes this ideal for cyclocross racing, says Specialized.

Specialized points out that it has “focused on the gravel experience” with the updated Crux.

“The bike’s incredible light weight, massive tyre clearance, and responsive feel are a package that many gravel riders have been asking and waiting for,” says Specialized. “At the same time, the Crux retains the performance fit and feeling that cyclocross racers appreciate.” 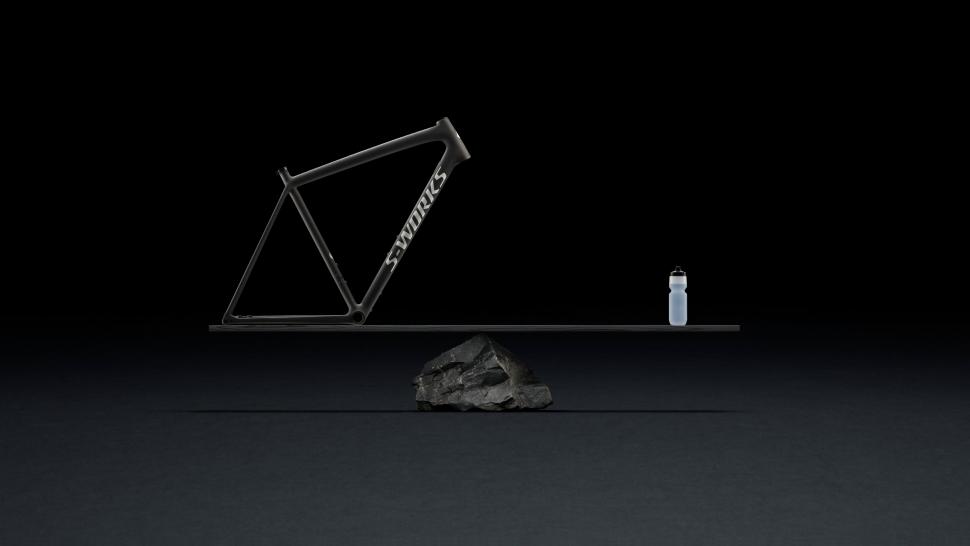 The headline claim is that the S-Works Crux is the world’s lightest gravel bike. While we’re sure that there are a few custom weight-weenie builds that go below the 7.25kg claimed here, we’ve not seen a stock build down this low, with most lightweight gravel bikes hovering around the 8kg mark.

The low weight, Specialized says, is primarily there to make the Crux responsive and the result, it claims, is “a gravel bike that climbs like a dream and floats over nightmarish terrain.”

To build a lightweight bike, you first need to start with a lightweight frame and if you think that the Crux now looks a lot like the Aethos that Specialized launched last year, you’re not going mad. Specialized used the same supercomputer tech to determine the initial tube shapes and proportions and then using “longer, unbroken plies in more consistent positioning, require fewer stiffness layers, and ensure every fibre is working to carry load.”

The result is a claimed frame weight on the Fact 12r S-Works model of 725g, or 825g for the Fact 10r frame which is used on the Pro, Expert and Comp bikes.

Like many of Specialized’s carbon models, the S-Works level gets you Specialized’s premium Fact 12r carbon. That makes it the lightest frameset in the range, but also the most expensive. For the Pro, Expert and Comp models, you step down to a Fact 10r frame, but the tube shapes and the geometry stay the same.

Apparently, the gravel department at Specialized wanted to play with the supercomputer too and with no focus on aero here either, it isn’t surprising that we see a lot of the same tube shapes used on the Crux.

As with the Aethos, the frame features a few sensible choices. A 27.2mm seat post means that there are plenty of upgrade options available if you want to go with a different brand's post. Securing it in place is an external band clamp and you can also run a dropper post. 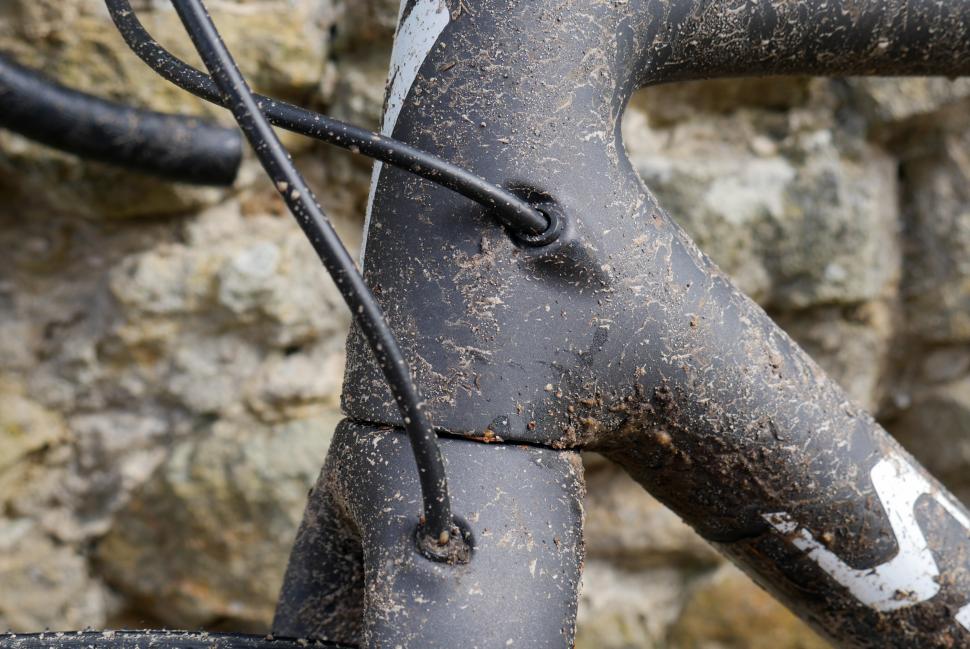 At the front end, hydraulic brake hoses travel externally from the handlebar until they enter the frame and fork for easier position adjustments and component swapping. 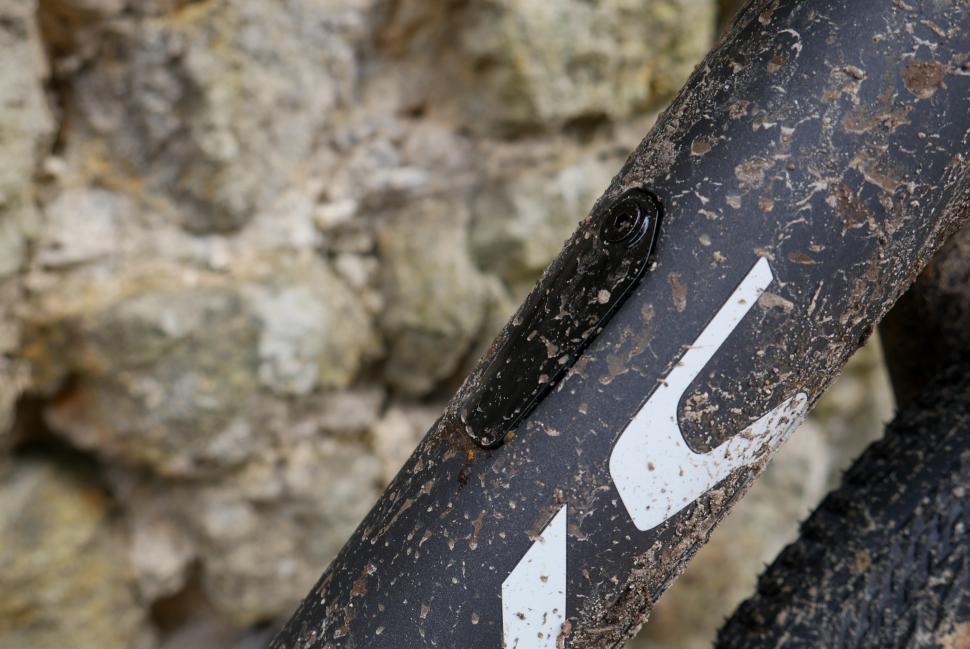 Any wiring for a dropper post or Shimano Di2 system will enter the frame via this port in the down tube. 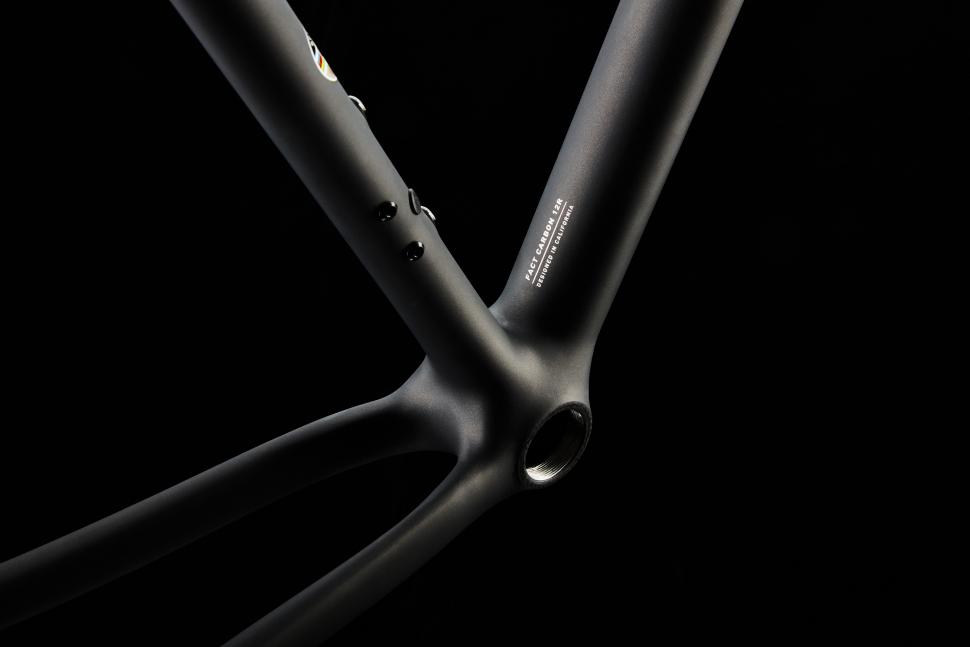 As with the Tarmac SL7 and the Aethos, the bottom bracket is a threaded sleeve that is designed to take external bearings. Generally, this is seen as a much more user-friendly option as the replacement bearing units are inexpensive and easy to install with affordable tools.

While we're down at the bottom bracket, it should be noted that Specialized isn't doing anything funny with the drive-side chainstay as it leaves the bottom bracket area. Where the Diverge gravel bike uses a solid beam to make space for the chainring, the Crux does not. Nor does it use a dropped stay as we see on a number of gravel bikes. 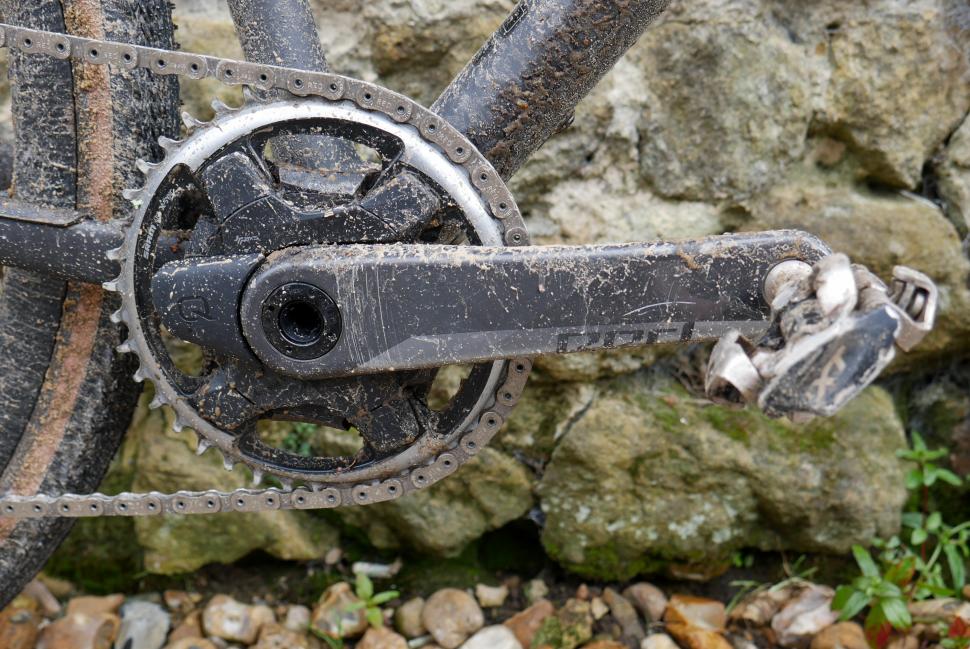 You will be marginally limited in your choice of groupsets, but both 1x and 2x builds are possible with the latter simply needing to be either SRAM Wide or Shimano GRX. The largest 1x chainring size which you can use is a 46T.

If you ask us in December what we’d love Santa to bring this year, it would be for the bike industry to introduce yet another standard with which to compare bikes against each other. Oh, golly! Specialized has done just that, inventing ‘CTW’, or clearance to weight. Their reasoning is that “nothing unlocks a gravel bike’s full potential like the combination of an ultra-lightweight frame with massive tyre clearance.” 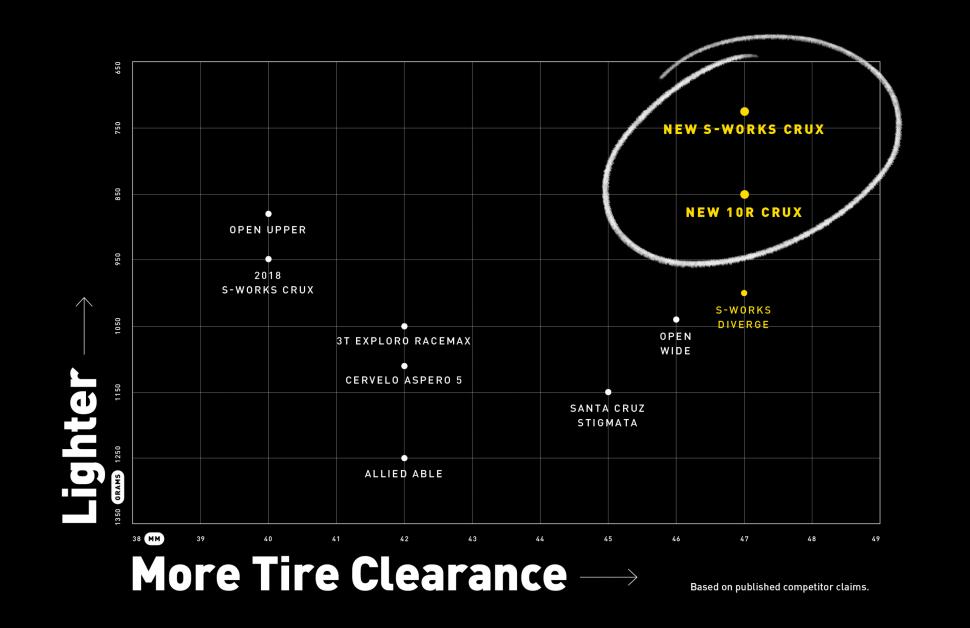 Based on published competitor claims, they’ve produced this graph which plots a range of bikes based on their claimed frame weight and tyre clearance. Against the rivals that Specialized has chosen to put on this graph, the Crux is both the lightest and the roomiest.

You could argue that Specialized has only decided to come up with CTW because it's winning a race that nobody else knew they'd entered, but that would be a very cynical assessment of the situation. Whatever the truth, the fact is that the new Crux is both brilliantly light and allows you to fit some very big tyres to your bike. 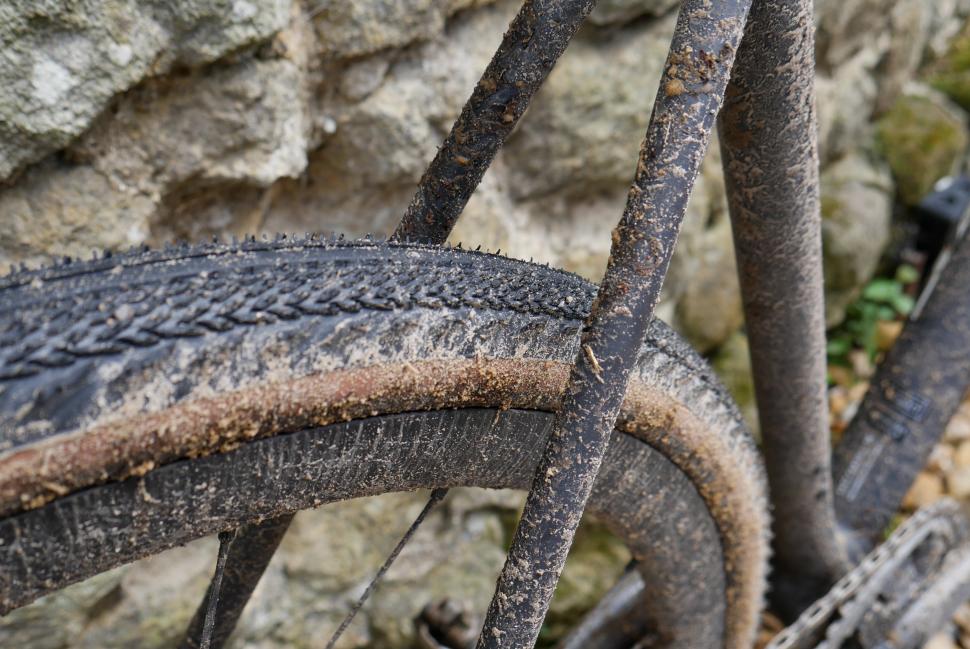 Beyond the clearance for 47mm tyres on 700c wheels, there is also the space for 650b x 2.1in rubber should you feel that your riding requires it. That means that the Crux now matches the Diverge for clearance.

Away from CTW, Specialized also makes the point that added tyre clearance is good for the cyclocross racer and that is especially true for the privateer racer that is rolling on just one bike. 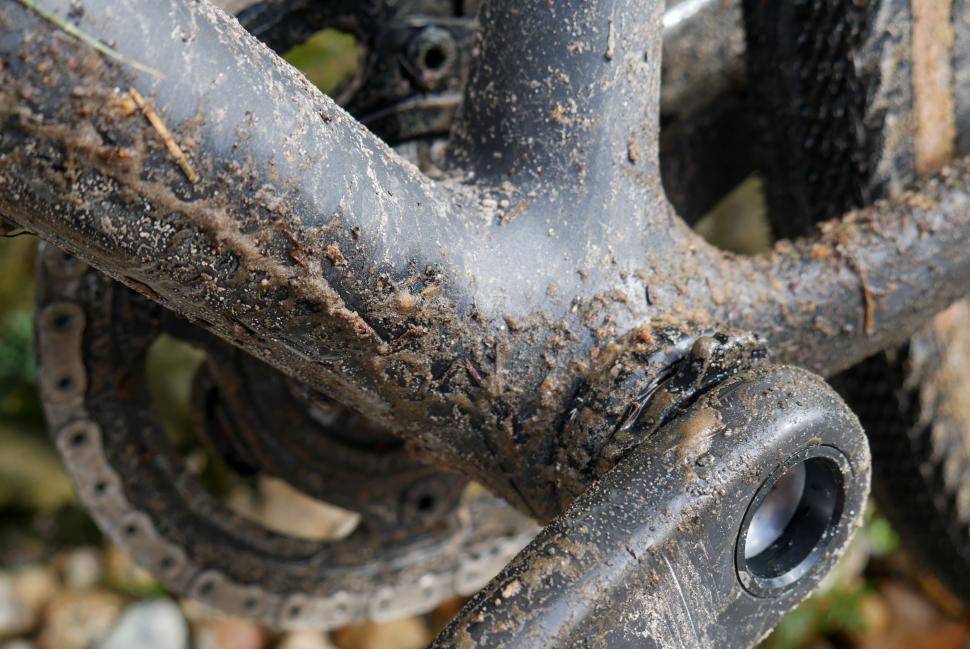 If you’ve done a muddy local CX race, you will probably have got yourself to the final 10 minutes of the lung-burning effort only to find that quite a bit of mud has collected around the tyres. This generally happens most at the bottom bracket/chainstay junction and it can stop the wheel from turning. Rather obviously, that isn’t ideal for your performance, so if extra tyre clearance prevents this, the logical conclusion is that you should do better in races instantly. 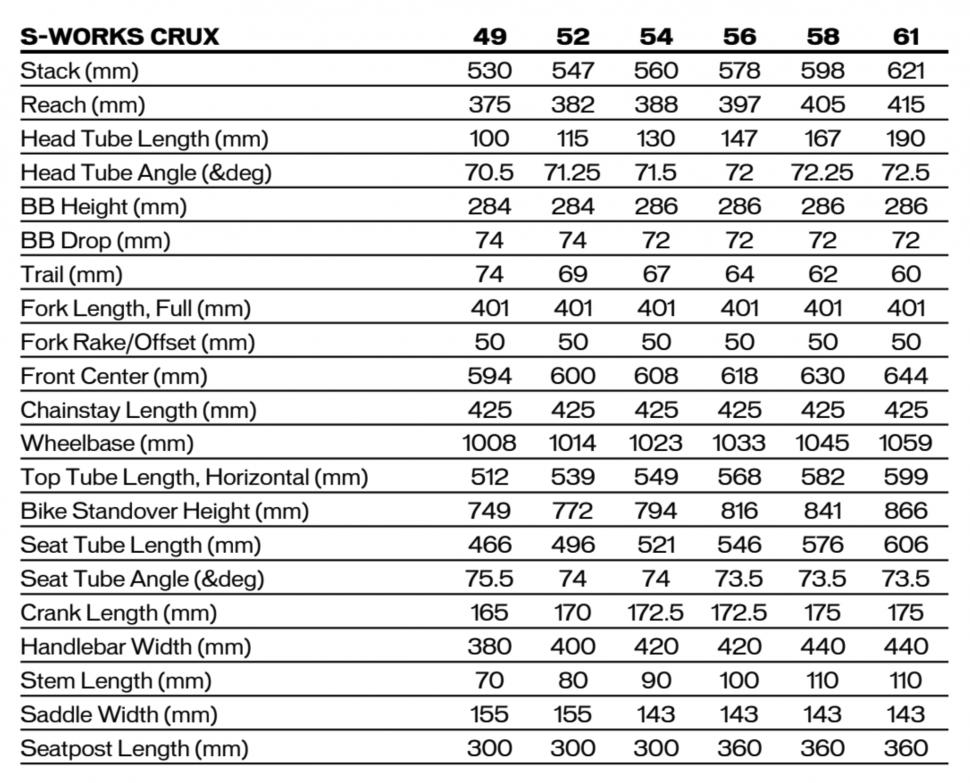 Usually, if you make room for great big tyres, you have to alter the frame’s geometry too.

Big tyres have an annoying habit of causing more toe overlap. All other things being equal, if you stick a bigger tyre on a bike you’re more likely to hit the tyre with your toes.

Specialized has increased the reach (the horizontal distance from the centre of the BB to the top of the head tube). This reduces the possibility of whacking your toes on a larger tyre but also affects the ride, performance, and fit.

Specialized has gone down the same route as many other brands, including Trek with its Checkpoint, increasing the reach but then shortening the length of the stem to counteract what would otherwise be a more stretched out riding position.

This approach comes from the world of mountain biking. Shortening the stem also has the effect of speeding up the steering, which Specialized describes it as ‘more responsive’.

Specialized has lowered the stack (the vertical distance from the centre of the BB to the top of the head tube) and we’ve now got a stack/reach that is down from 1.50 to 1.46. This usually implies a more race-focused position, but only if the stem remains unchanged. As mentioned above, Specialized has shortened the stem to drag the handlebar position back a little. It says that “the low stack reinforces optimal weight distribution and is ideal for an aggressive fit.”

A 72mm bottom bracket drop is, Specialized claims, “the sweet spot to create a low and confident feel while ensuring the bike remains nimble for quick line adjustments and tight, fast tracks.”

BB drop is the distance the centre of the BB sits below a line between the hub axles. If you fit bigger tyres you’ll obviously lift the frame higher. Increasing the BB drop from 69mm to 72mm brings your weight slightly back down again, which is good for stability – hence Specialized calling it ‘low and confident’.

Added to this, the wheelbase on the 56cm size has increased from 1026mm to 1033mm which should result in a more stable ride feel.

Just as we saw with the Aethos, the new Crux uses a Fact 10r carbon frame for the Pro, Expert and Comp models. You add 100g to the frame weight, lose a little bit of ride quality and save a whole chunk of money.

The spec level also changes between models so here’s a brief run through the prices, claimed weights and specs. 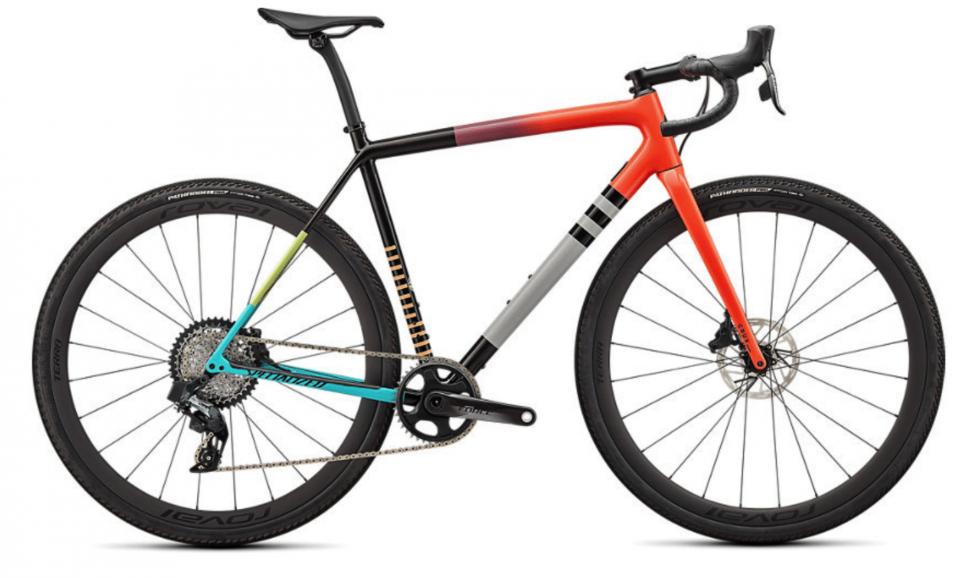 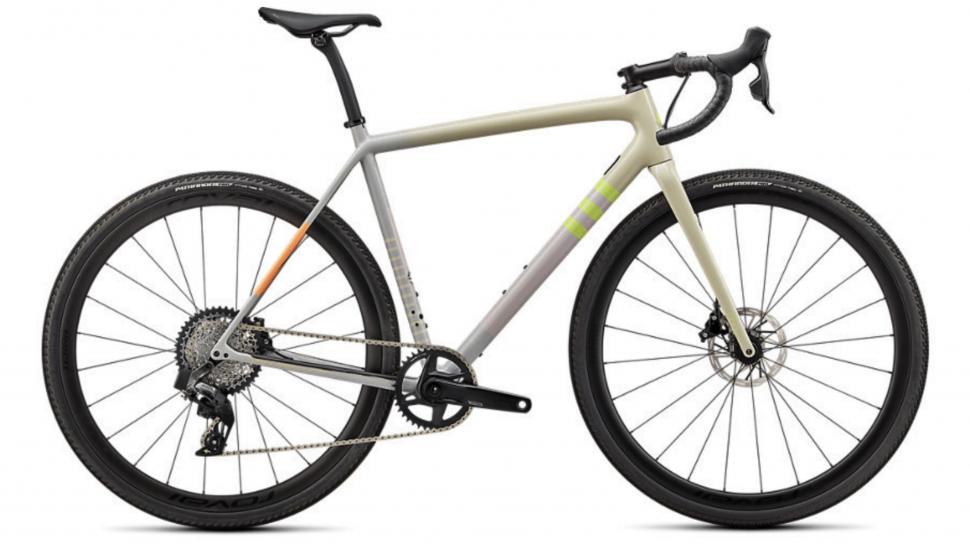 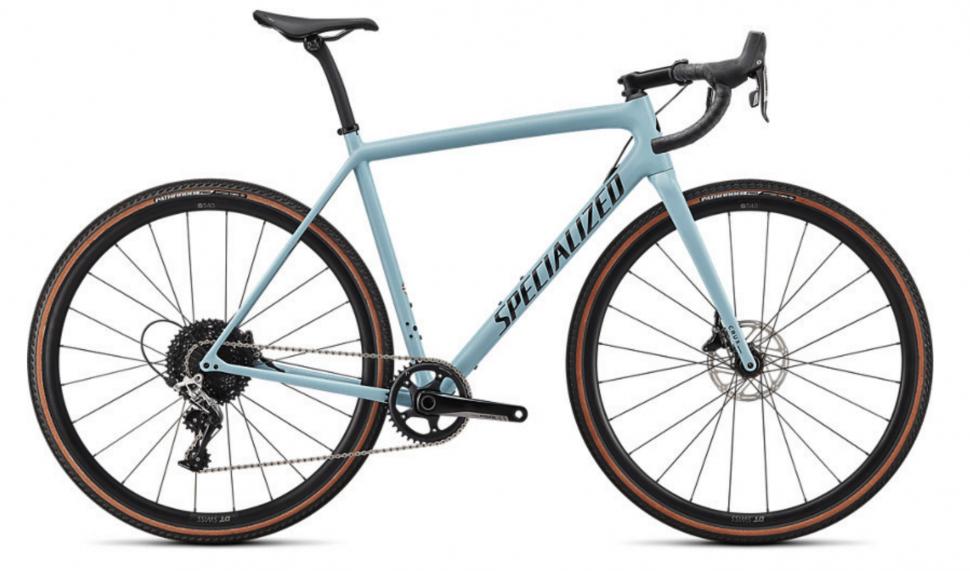 All models, from the S-Works down to the Comp, share the same Fact 12r carbon fork that weighs a claimed 400g with the steerer cut for a size 56cm frame. While Specialized is only selling 1X SRAM builds, the frame can take most 2X gearing setups, though you can’t run 2X mechanical groupsets. All frames can also take a 27.2 dropper post should you wish to add one.

1
Cyclist shot by hunter who says he mistook him for a rabbit
2
Car wing mirrors studded with spikes reported to Greater Manchester Police
3
Road rage driver who rammed and killed cyclist and then boasted about it jailed for 10 years
4
Mark Cavendish reveals ‘hole behind heart’ after serious crash in Belgium
5
Near Miss of the Day 669: Cyclist confronts driver after 'worst overtake I've ever seen'
6
New Zealand MP goes into labour, cycles to hospital to give birth
7
Cyclist sprints away from knife-wielding mugger – and warns others to be vigilant
8
Government clamps down on handheld mobile phone use while driving