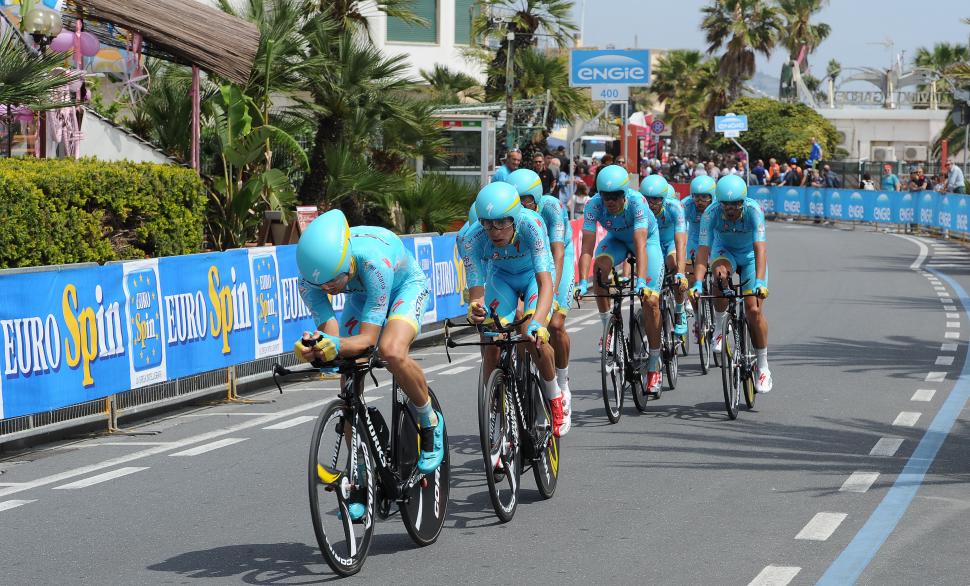 The Tour de France has been rolling for more than a week now and has finally made it to France in a brutal few days that has seen 220km stages, major crashes, cobbles, steep ramps and broken bones for two race leaders. But perhaps the biggest challenge lies just around the corner in an intriguing Stage 9, where the riders have to cover what looks like a trifling 28km, writes Florentina Hettinga.

The problem is that those 28km come in a lumpy team time trial from Vannes to Plumelec, and include a 2km finish at a 6.2% incline. Normally, that wouldn’t set the heart racing for the main contenders, but this will be an exciting test. Each team must bring five riders to the line together before the clock stops; with Tours sometimes decided by seconds, co-operation is now required for the riders to win.

That teamwork is essential in a team time trial was made painfully clear in the recent team time trial at the Dauphiné Liberé, a week-long stage race that is a traditional warm-up event for the three-week romp around France. In a stage comparable to the Stage 9 Tour route, several teams lost one or two riders early in the time trial as the road rose and fell. This is a huge risk, or a huge error, depending on whether it was planned or not.

Simply put, the more riders you have, the less time each of them needs to cycle in the front position, the position where aerodynamic drag is experienced most and most power must be expended to maintain a competitive speed. In a previous article for The Conversation, I have outlined the benefits of drafting – but these benefits are amplified in the team time trial.

Drafting behind your fellow team member can lead to at least a 15% reduction in required power output compared to the front rider while cycling at the same velocity. Having a rider behind you is of benefit too as it removes the void which acts as a drag to the rear. All this means that drafting is crucial for the team time trial – and riders need to optimise their aerodynamics by riding closely together. At the same time, they will need to share the load of riding in the front position and distribute the team’s energy optimally over the race. That is a tough call to make. Each bump in the road will suit different riders best.

So, let’s put you in the skinsuit and aero helmet for a moment. When you are cycling in front position, you can imagine yourself cycling through a big bowl of table-tennis balls: the air molecules. Now imagine that you would like to accelerate and cycle twice as fast through this big bowl of balls: you will hit twice as many balls per second, but also, you will hit them with twice the impact force per ball. This means that the air frictional resistance is four times as large (twice as many balls x hitting them twice as hard).

In fact, it means that it requires relatively more power to accelerate above average velocity than it would save to decelerate below average velocity. The below image helps to understand why riding to beat cycling’s world hour record, for example, calls for an evenly paced race rather than variable pace.

Individual time trials have been seen in the Tour de France since 1934 and are a fairly straightforward test of one rider’s ability against another (assuming the weather doesn’t sharply change during the stage).

Team time trials, however, demand more debate because the format can clearly favour the strong team, while handicapping strong individual riders who are supported by relatively weaker team mates. We have seen that drafting is crucial, and we have seen that were it possible, an even-paced strategy with each rider taking equal shifts in front would be optimal. As we have hinted at above though, not all riders are equal.

And lastly, remember that the time of the fifth rider over line is the time that counts for the win. That offers the possibility of sacrificing riders. They might burn off the weakest riders in the early stages, or keep the weaker climbers as fresh as possible for the final ramp. It can be a huge risk. The Dauphiné Liberé team time trial saw most, if not all, teams arrive at the finish with the bare minimum – and all it takes is a late puncture to bring that strategy crashing down.

The complexity of pacing, strategy, aerodynamics, power and gradient may seem hidden at first glance as the teams glide past in sleek formation, but with so many factors at play, there are so many aspects that can go wrong. It’s unlikely anyone will win have won the Tour once Sunday’s team time trial is over, but don’t be surprised if a couple of contenders have seen their chances slip away.

Florentina Hettinga is Lecturer in Sport Science at the University of Essex's School of Biological Science. This article originally appeared on theconversation.com and is republished with kind permission under a Creative Commons licence.

1
"That's why it's so shocking": Colin Strickland says on-the-run murder suspect Kaitlin Armstrong "one of the least volatile people I have ever met"
2
Cyclist "luckiest man alive" after tumbling down "crazy" brick staircase on cycle route's steep hill
3
Near Miss of the Day 789: Sensible discussion and apology follows learner close passing cyclist during driving lesson
4
Cyclist punched repeatedly by motorist in road rage incident
5
How many miles do you get from your tyres? Plus new stuff from Hutchinson, Santini, Le Col, HUUB, and loads more
6
UCI downgrades RideLondon Classique due to “unacceptable lack of respect” for teams and riders
7
“This could be his GC over”: Joe Biden falls off bike after getting foot caught in toe straps
8
Near Miss of the Day 786: “They have been behind you for some time” – Police say close pass isn’t careless as cyclist didn’t change direction