Fancy riding across Europe with a 10yr old?

Christopher, the hero of this story (no.1 Son - 10yrs old), is both excited and nervous standing next to his shiny Genesis bike, packed with energy and ready to roll out. I don’t think I’ve seen him this way for some time, it’s clear that we are both really looking forward to this adventure, him for the ride itself and I’m stoked to see how it’s going to turn out! We are relying on the Wahoo Elemnt for mapping, but in honesty I haven’t actually checked the route, so for a while we are stopping and figuring out where we should be going!  Thankfully the route across Holland is exceptionally flat, with just a hundred metres of altitude in that first hundred kilometres, today is going to be an easy day, and we spent the morning leisurely crossing canals, exploring Bridges, enjoying the ride and our time together. I’d pitched the first morning to Christopher as an opportunity to indulge in hot chocolate and waffles, accordingly at the first village we stop to we got our fix (as the elite athlete that I am I wouldn’t normally have stopped, but you know, Christopher was there and I kind-of felt that I had to ;-)) 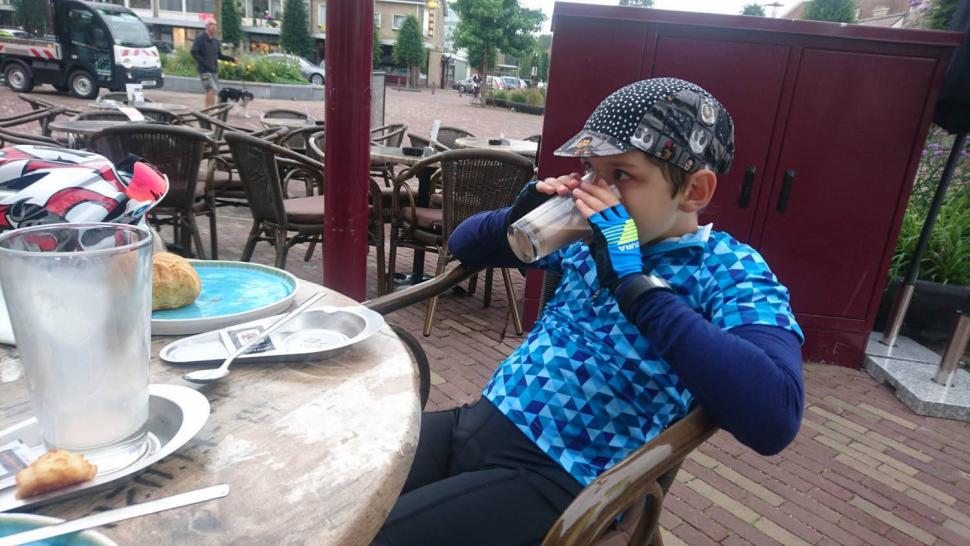 The sense of freedom of riding in Holland is liberating compared with what you encounter in England, the infrastructure is set up so that you genuinely feel welcomed on the few roads you ride on, the rest of the time you are riding on set-apart pathways, with no danger of traffic anywhere near you – absolutely perfect for a family adventure! With a pace of just 15 kilometres per hour we were happy riding and singing our heads off as we pootled through the countryside. Christopher’s mood was exemplified by something I didn’t know at the time, whenever I pointed the camera back to photograph him, he would stick his tongue out at me. In hindsight it really showed how much he was enjoying his ride, because he’s not normally a tongue sticker-outer. Now when I, post-ride, look at these pictures they bring a real smile to my face! Christopher has Asperger’s , a condition which can delay picking up fine motor skills, and this was evident during the ride as at every start the pedals had to be ‘just so’, I would help him along by shouting ahead for gear changes and braking in advance, especially if there was a corner coming up, reminding him to slow down….. (suffice to say this was a learning curve for me as well, with him riding into a bush at one point ;-)). These little lapses in concentration gave us opportunities to work together to see how it happened and put in a plan for the next time we came across the scenario. Thankfully, they weren’t too common…

One of the things I loved about this ride (and I’m almost certainly going to repeat this sentiment later) was that I go to see things in him which I’ve never seen before. His potential was really opening up during the day, and whilst he will certainly face challenges in his coming school-days, the ride, I hope, showed him that he has the ability to really complete the tricky tasks he will face. We all have our idiosyncrasies, but we are so much more than those quirks, and it was truly beautiful being able to witness this little dude riding, turning the pedals and challenging himself. Around the 60 kilometre mark I rechecked our routing, and what I thought was going to be a 100km ride was now showing that it was going to be 120 kilometres! We were looking to see how far we had remaining and Christopher was starting to ask about finishing times, I think he was looking to make sense of the day in his own mind, I didn’t have the heart to tell him at that point that there was going to be an extra 20km! When he would ask I would simply tell him we had done three quarters of the distance, just to stretch out that day a little longer without breaking the extra 20% to him (and yes, I felt rotten doing it!).

One of the things I had miscalculated, overlooked perhaps, was his need for food and drink, and in this i erred greatly! Whilst I can ride 100km without eating or drinking, Christopher was not used to this, so was on the lookout for food! His top-tube had a bento box filled with biscuits, waffles , and other local treats, and I would encourage him to eat a little bit each time we stopped. But clearly what he really needed was a proper meal and it turned out that our route that afternoon didn’t go through a town with a cafe from 10am till 3:30, by which time he was not particularly impressed with my routing skills and was more than happy to tell me what he thought of the day’s route! The first town we came across we stopped at the very first cafe that we found, indulging in frites and kebabs! Dutch kebabs are very different to the donna you might find at 2a.m. on a high street so we were greeted with meat and vegetables on sticks, and when I say meat Christopher wasn’t quite sure what was on his plate, but he set about devouring the mini burgers and meat cocktails with aplomb, no doubt assisted by a can of fizzy pop to lift his spirits! Getting closer to the city, we turned the lights on, and he donned my Rapha brevet gilet for warmth and visibility as the evening started to draw in.As we made our way into the city itself our sightseeing lasted a full 10 seconds before we decamped to the nearest pizza restaurant, then headed to the youth hostel just around the corner. Whilst I checked us in, Christopher sat in the lobby and promptly fell fast asleep on the bench  – thankfully the staff were fine having an exhausted little dude asleep in the lobby whilst I got the room ready for him. A shower, good night’s sleep, and a hearty breakfast and we were ready for next day! No matter how much I asked him, he professed to feeling no tiredness – DUDE! Most of the next day was spent riding along canal paths towards Geraardsbergen, avoiding the punchy hills Belgium is known for. Spirits were high as we road along, the noise helping to keep signs of discomfort away, and it was the most glorious afternoon riding these quiet paths singing together. Well I say together, Christopher was coaching me in the correct wording of songs from the musical Matilda, and together we ate up the distance with laughter and song! Somehow, and I’m not quite sure how it happened, our hotel and chosen town for the night, was coincidentally also the starting town for the 2016 transcontinental race! After riding up the famous Muur and getting the obligatory photo standing by the chapel, we were able to see some of the racers, and Christopher got his self esteem stoked further by riders such as Ultan Coyle, Neil Philips and Emily Chappell  before we made our way to the hotel and straight back out to the start line to watch the race.

This was my 3rd time witnessing the race start, and each time it gets bigger, bolder, and more involved, and having Christopher there with me to witness the race was brilliant, as we got to be part of the torches and the procession. Later-on as he bedded-down in the hotel he did so exhausted and happy!

The next day started with a leisurely breakfast and an early ice-cream before we headed out towards Mons and a family reunion. Again we found ourselves on canal paths for nearly the whole day, enjoying the peaceful serenity of the countryside, and whilst it was certainly clear that the distance was taking its toll on him, as you would expect after 200km, his spirits were eased by the scenery, the sunshine, and being liberally sprayed by my water bottles! 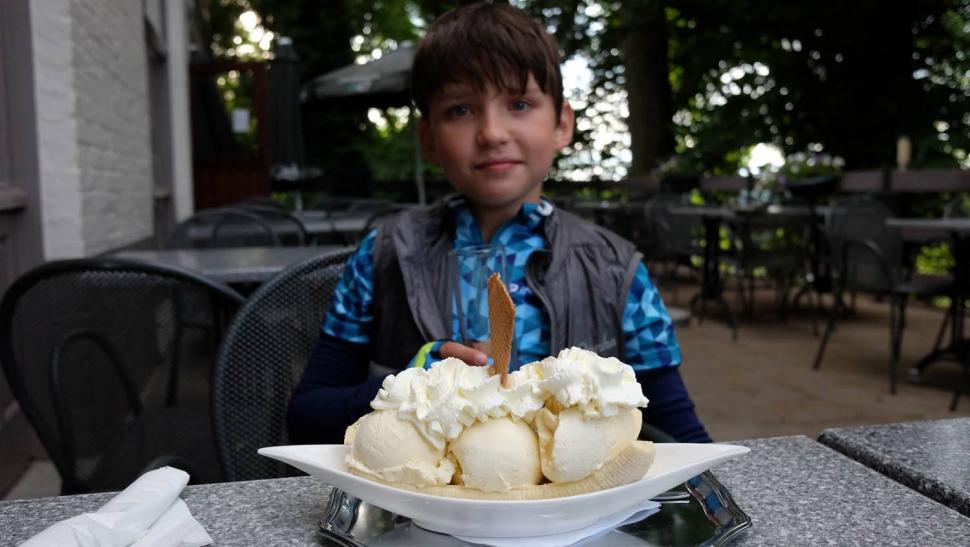 At Mons we were reunited as a family, and his little brothers Oliver and Harry came rushing to him to give him the biggest of hugs, showing just how much they had missed him, and certainly how much they admired what he had achieved! It was a lovely moment to witness, as the smiles were beaming and utterly genuine! As a cyclist what we had ridden would take me an afternoon, but as a father what I witnessed was the result of 3 years of consistent work on his side. I was, and remain, utterly delighted by his attitude and tenacity! As we started our ride together if I’m honest I wasn’t totally sure how it going to turn out, with him having never ridden this far before. His positivity of spirit and body really amazed me, as I witnessed the strength and resilience of my son, I felt almost privileged to watch him grow day by day as we rode.

Throughout the ride that resilience shone through, even as we rode up to the top of Geraardsbergen his little body was tired and battling against gravity, but kept going until the end. He was boosted along by a hand on his back to push in those last few hundred metres, much to the amusement of the pedestrians, but he kept giving his all – and letting me know quite vocally that he’d like to have dinner There’s no doubt about it, what Christopher had achieved in those two and a half days would be a good ride for most adults, let alone for a10 year old boy, again I felt humbled to help him in his journey.

And as we went through the tricky parts, the hunger pangs, tiredness, and heat, I tried to constantly reinforce in him how well he was doing, to provide anchor points for his future that he could turn to, especially as the exams come ahead of him in the year ahead, to help his self-esteem. In the quiet moments of the days after the ride, we as parents would tell him about those people on social media who wished him well and his face would light up, and we would  remind him that he can do those things that feel tough, even if it feels like they are too hard at the time.

I feel closer to Christopher having shared this experience together.  As a family unit we don’t talk about secrets we talked about surprises, we try not to whisper, preferring instead to be inclusive with each other, but these few days have helped us to get closer as father and son, as friends, bonding us together in common experience, and it feels amazing. 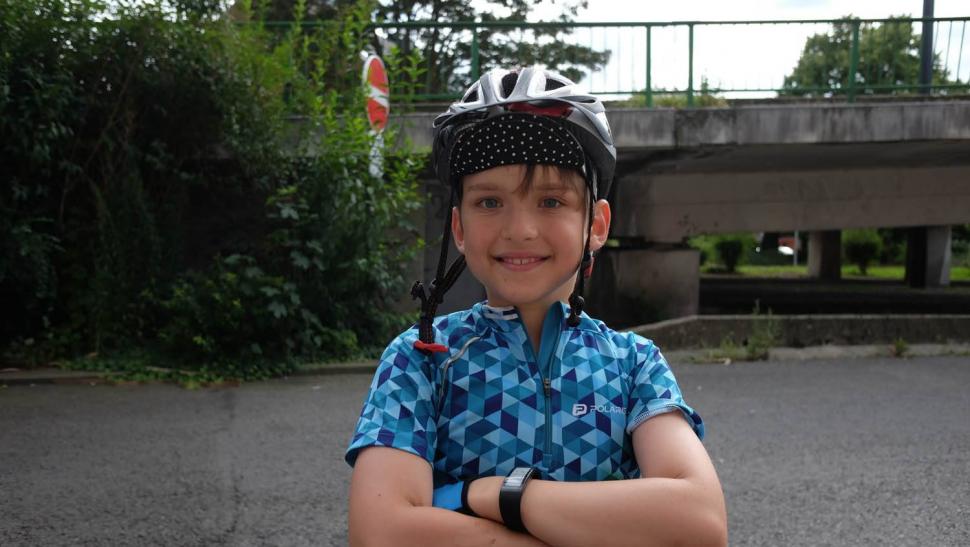 If you have kids, I would absolutely recommend such a journey together, to bring smiles not seen to their faces, and to challenge their own perceptions about their abilities and talents. Will it be repeated? Maybe. Has he asked about going riding again? Definitely