Cycling from London to Rome... with a saddle bag and a credit card 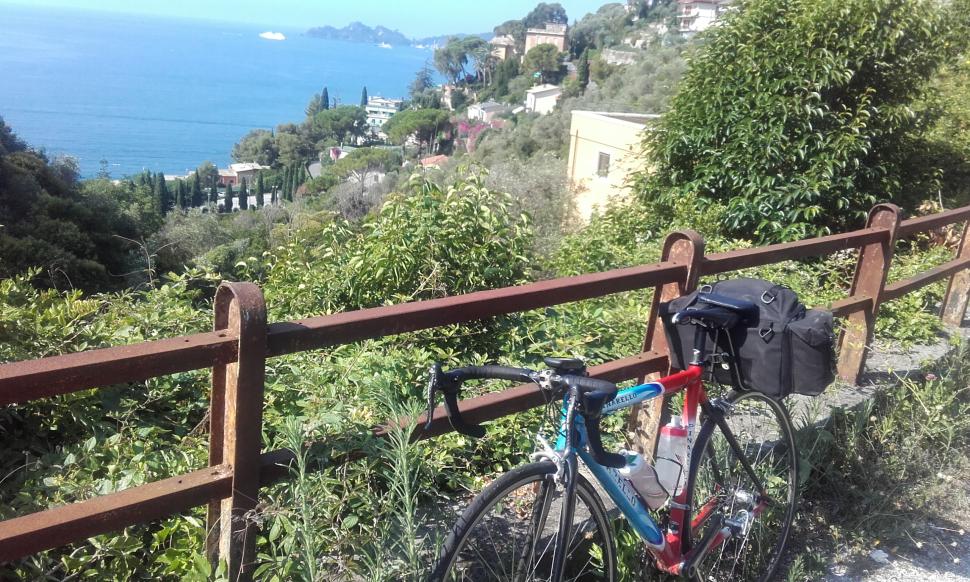 Reckon you travel light on the bike? Jonathan Donald takes us back to an epic trip he took from the UK to Italy's capital a few years ago, with just an oversized saddlepack and a credit card in his luggage...

As it now appears that there's some light at the end of the lockdown tunnel, many of us will be longing for the day we can head off to a faraway land without worry. If you're not into conventional means of travel, then perhaps you'll be inspired by Jonathan Donald's epic trip from London to Rome by bike with next to no luggage.

> Cycling from London to Barcelona: a more enjoyable LEJOG alternative?

With just an oversized saddle bag and a credit card, Jonathan's journey to Italy's capital was undertaken on a well worn bike, and there were plenty of trials and tribulations along the way. Here's his story...

"A few years ago I set out from my home in South West London and cycled to Rome. Aboard a slightly jaded Pinarello with a Carradice saddle bag, I embarked on a solo adventure guided by a hired Garmin and supported by a credit card.

The first leg of the journey took me through Surrey and Sussex, ticking off popular climbs such as Box Hill and Ditchling Beacon, and down to the port of Newhaven.  A creaky old gate opens and you board a throbbing old bruiser of a ferry for a four-hour crossing to Dieppe.

From Dieppe I headed towards Orleans on the Loire, initially following the Avenue Verte, a former railway line which has become like a leafy artery for cyclists bound to and from Paris. Traffic-free miles can be covered with only the slight inconvenience of a sporadic gate or road crossing to negotiate. 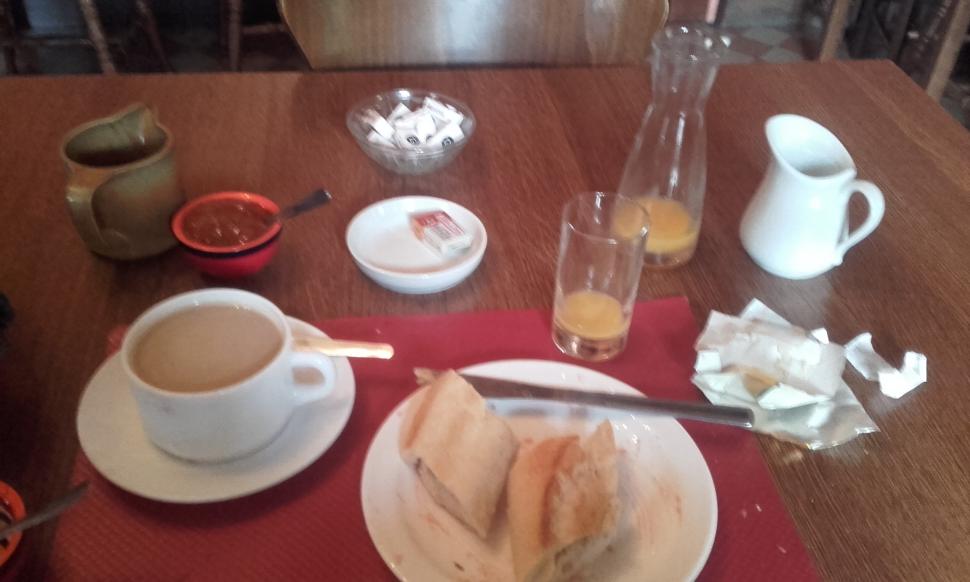 The vibrancy of French rural life has been eroded, and areas of France that I passed through were littered with phantom towns. Many cafes, restaurants and hotels were closed, and travelling in a care-free fashion proved difficult as there’s not much out there.  I had a few stressful late afternoons as I searched for accommodation.

Three days in and the physical challenge of the trip hit. I was fairly fit from riding to work and racing regularly. But riding for up to six hours a day, every day was challenging. Some evenings I was in bits. Food helped but had to be regulated. A bready breakfast, one-course lunch and two courses maximum at dinner sufficed. Booze and desserts had to be rationed to avoid nausea or difficulty sleeping.

From Orleans, I turned west with the flatlands giving way to rolling scenery. I followed the banks of the Loire. The route was mostly quiet roads and some dusty cycle paths, popular with hordes whizzing along on electric bikes. As I turned the pedals incessantly, I thought a lot about cadence. This type of cycling seemed to be all about riding within oneself. Whenever I started to push I clicked down a gear; holding back was the key to endurance. 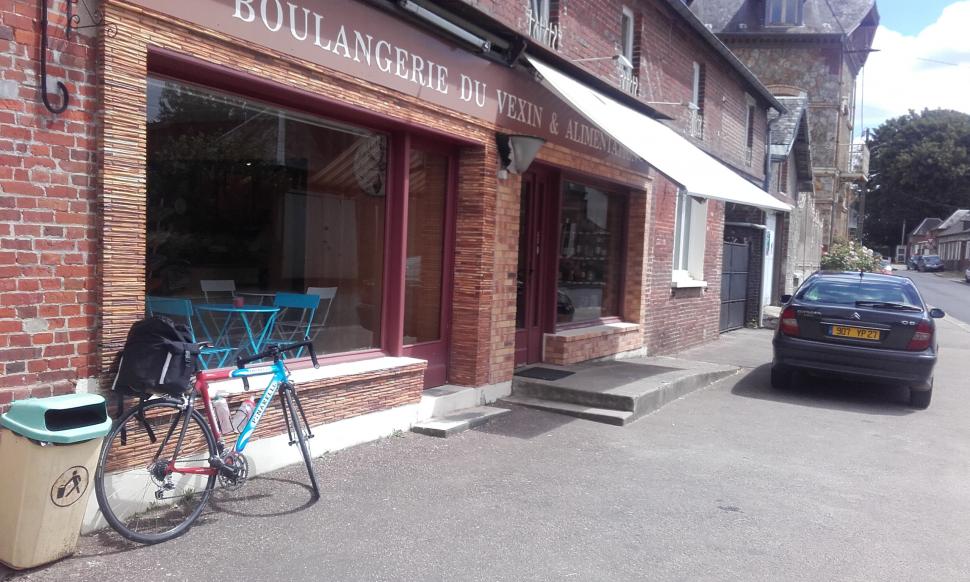 Turning south east, I headed into the beautiful but hilly Parc Morvan, including the village Mine d’Englebert (no connection to Humperdink!) and on to Luzy. The Garmin took me on some incredibly quiet roads; indeed some were barely roads, perhaps only occasionally used by loggers or hunters. I wondered if anyone would discover me if something bad were to happen.

Heading towards Lyon and on to Grenoble and the Alps, a stormy relationship began with the Garmin. Following a course that it charted wasn't always the best idea. When heading for Bourg d'Oisans I headed up a climb that it directed me to; but on consulting the map I realised that reaching Bourg could have killed me, as I would have had to ride into the night. I could have thrown the gadget into the reservoir far below me as the body and mind went into meltdown.

I headed south to Gap and then west to Barcelonette, and over the Col de Larche into Italy. Ascending the col I neared a sense of cycling bliss, even with the precipitous drops to the side of the road. I began to smell the landscape, the fir trees, the blue meadow flowers and admire the many butterflies that flitted near my spokes. All around me craggy peaks overlooked my happy toil. 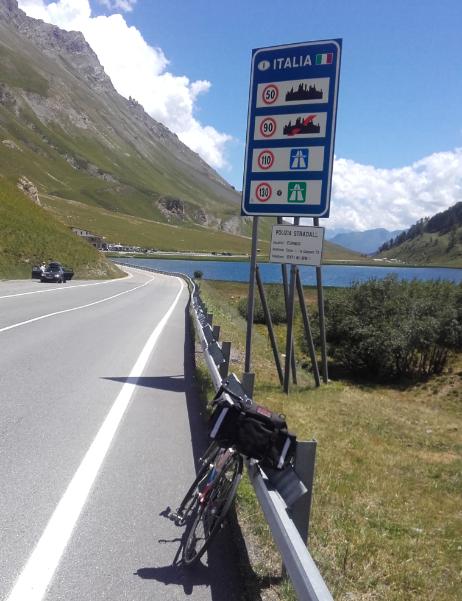 Drivers in Italy may be more hyper than in France, but generally I found this leg of the journey to be the most enjoyable. A major reason was the food, as Italian breakfasts were far better than those offered by many French hotels. Fruit, cheese, cereal and fruit tarts were among the array of items offered, and the cappuccino was a fantastic way to kick-start my morning. Then you could have pasta at lunchtime , perfect fuelling food. A gelato was the afternoon treat, as my my mind turned to looking for accommodation each evening.

From Cuneo, I headed south to the very spectacular and lumpy Ligurian Coast. In the distance traffic sped along aqueduct motorways raised high above the many valley floors. While they sped, I laboured up countless climbs and cautiously made twisting descents, and the new challenge of tunnels. For the cyclist, these were scary as you had to brave moments in pitch dark unable to see the road surface, just hoping traffic behind had seen you. 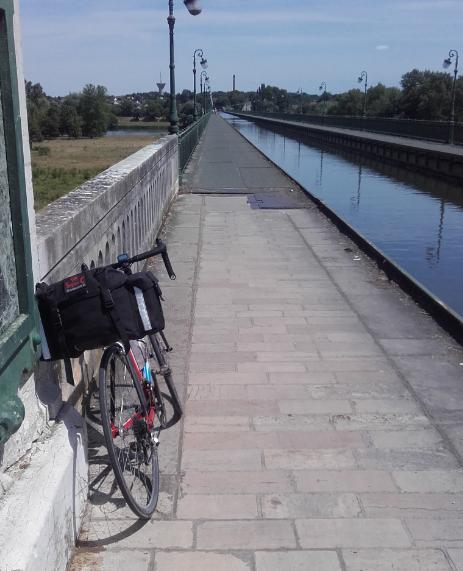 Following the coast road from Savona, I passed through the vast port of Genoa and on towards La Spezia, stopping for a night in Recco, before marvelling at the beauty of Rapallo. I almost fizzled out hauling myself over the long climb to Passo de Bracco.

At La Spezia, I turned inland towards Lucca and on to Siena. It was among the many foothills that the furnace heat of Italy finally kicked in. The Garmin registered 42C as I lugged the body and bike up endless slopes, and the heat almost burnt my throat as I gasped.

Entering the stunning medieval city of Siena, famed for the Strada Bianche finish, I felt the body made in Scotland had reached its limit. Thankfully, the sugar and cooling effect of ice cream returned me to the state of mind needed to find a place for the night. I lucked out, checking into a very stylish B&B with amazing views and a grand drawing room where I sat like a genteel zombie sipping Earl Grey.

Try komoot for planning your next long tour...

From the medieval grandeur of Siena, I made my way to Rome via Lago de Bolsena. Tuscany may be a favourite holiday destination of the wealthy bourgeoisie back home, but some of the region seemed more like Glencoe at times. The landscape was utterly desolate, the sky was grey and a relentless headwind kept my speed and cadence to an escargot’s pace. 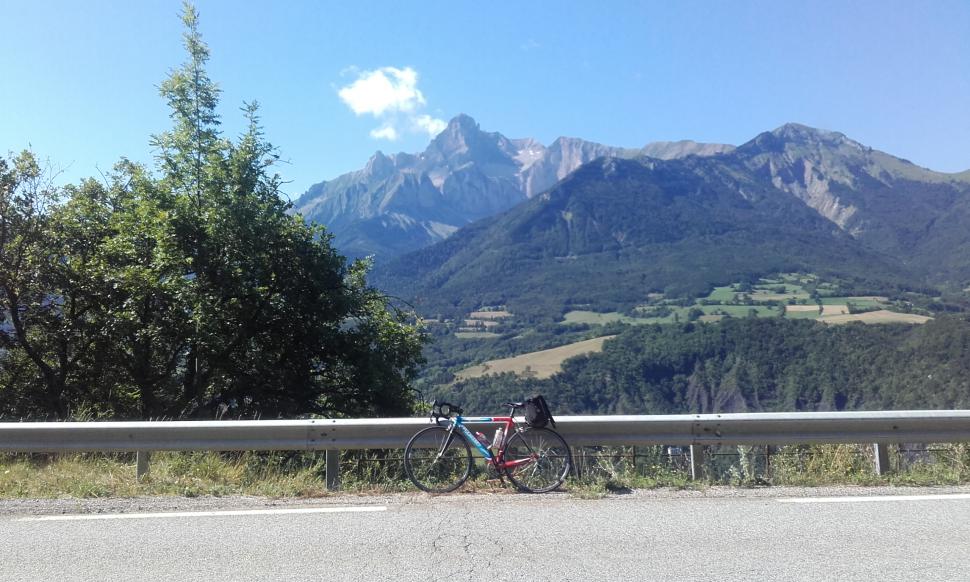 The penultimate night’s accommodation in Bolsena was interesting. The first place I found was the Pensione Italia, a bizarre gaffe run by a mother and daughter who lived in a darkened room with a fan and a TV. The whole place smelt of tuna and had a shared toilet. It seemed to be a haunt for pilgrims, making their way along the ancient Via Francigena from France to Rome. Thankfully, the night passed peacefully – not awoken by pilgrim neighbours in raptures of self-flagellation or the discovery that I had stigmata – though I did have a minor saddle sore emerging!

I rolled out for the last time, with the blood surging very pleasantly after pastries and cappuccino. It only took 4 hours to reach Rome, with the help of a short stint on a dual carriage way that wasn't much fun. As I rode through the suburbs I kept waiting for a memorable vista, and it finally came as I rounded a downhill bend. There it was, the historic centre with its tiled roofs and domes, and I was like a conquering hero rolling through its boulevards.

The bike had got me to this incredible destination without a puncture or a mechanical. Fifteen, up to eight hour-days on the bike and it was over. I could have celebrated by dropping to my knees in St Peter’s Square, but I'm a cyclist not a pilgrim. Food and drink was all I needed, and a picture of the bike in front of the Trevi fountain.

The sense of achievement was profound. I had discovered a side of cycling overlooked as I commuted, trained and raced. It offered an incredible sense of freedom, away from the stresses of the modern, hectic world. It was a lot to ask of loved ones, letting me set off into the relative unknown. What if I’d crashed on one of those Alpine or Ligurian descents? Or, if one of those numerous lorries had brushed me? But I survived, and the experience has become a glorious memory to flick through in my mind back in the world of lockdown.

A seed was sewn, and I look forward to future adventures..."