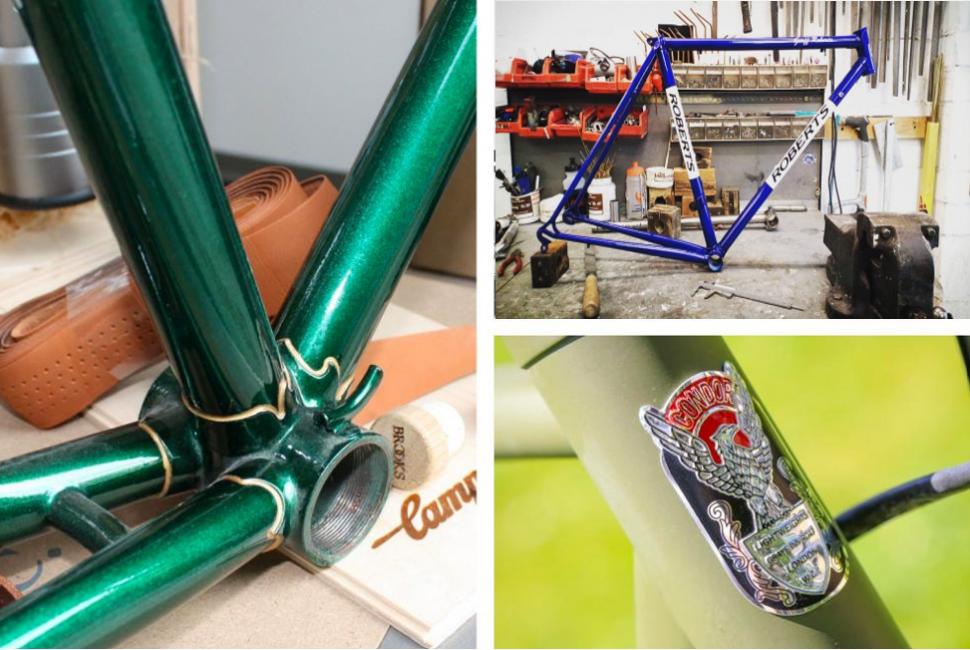 Southern Steel: take a trip down memory lane with these classic 20th century bike builders from the South of England

Until the late 1980s, if you wanted an excellent bike then only a handbuilt steel beauty would suffice. Let's reminisce about 10 of the best from Southern England (and the West Midlands!)
by Steve Thomas

Until mass-produced aluminium bikes first came around in the 1980s, steel was still real when it came to frame building. Handbuilt was very much the way we rolled.

> 11 of the best British bike brands

There were some awesome frame builders around at that time, but sadly many fell by the ‘off the peg’ financial wayside of progress. In this two-parter, we’re looking at some of the classic British builders of the 20th century. Some of them are still around, some have prospered, some are unfortunately no more.

There were too many to mention in just one article – or even two, after we were inundated with requests after publishing our round-up of our 10 favourite British bike brands of the past – so we’ve had to cut it down to 10 makers from the south and 10 from the north. As this is a two-parter we've included one West Midlands maker in our southern round-up, which won't please you all but we had to draw the geographical line somewhere!

Anyway, saddle up and enjoy the ride down memory lane. While we can still remember how to find it… 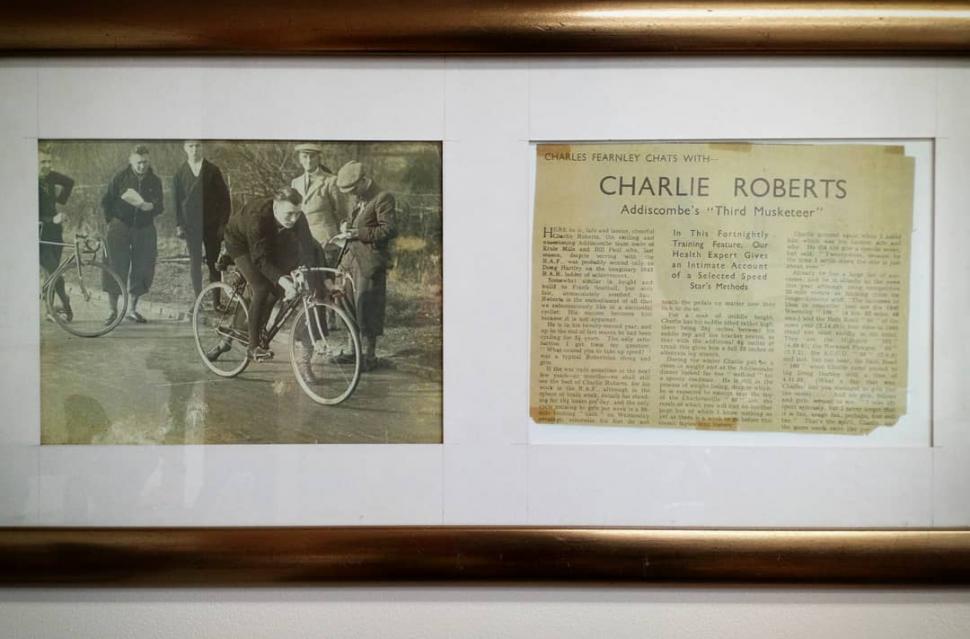 When you think of great frame builders from the south, the name Roberts stands out loud and proud.

Charlie Roberts was a London frame builder and accomplished time triallist who had been working for the likes of Holdsworth, Claude Butler and Freddie Grub up until World War 2, when he joined the Air Force.

After the war he returned to frame building with Holdsworthy, one half of the Holdsworth brand following a split in the business; and in 1964, he went into business making Roberts frames at his house in Sydenham. The rest, as they say, is history. Roberts became a family affair, and Chas (Charles junior) took over the reigns from his father, and arguably transformed Roberts into a legendary and relevant brand during the 70s and 80s. Chas retired in 2015, but his brother Geoff Roberts keeps the family faith and still builds frames under his own name. Famous for their curly rear stays and epic lugs, Hetchins frames are perhaps some of the most curious ever made. They’ve been highly collectable on both sides of the Atlantic for decades.

The company was set up in 1920s Tottenham by Russian immigrant Hyman Hetchin. In 1934 he went into partnership with a local frame builder who had come up with the idea of their trademark curly stays. 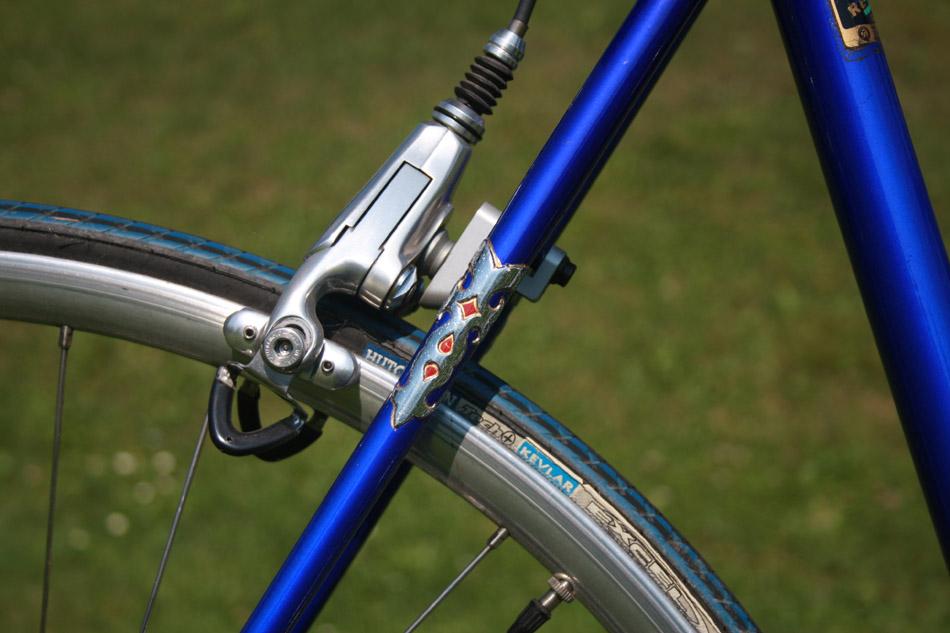 Hetchins bikes were not just pieces or art, and an Olympic track title was even one aboard one at the infamous 1936 Olympics. Hetchins have made more than 12,000 frames over the years, and although the brand has changed hands a couple of times, northern frame builder David Miller still produces ornate and curvy Hetchins-branded steelwork.

The names Bates has appeared on classic steel frames since way back in 1927. The company was founded a year earlier, and produced their first frames badged as Bates Cycles from their Swete Street (London E13) premises.

Horace, the founding Bates brother, was soon joined by his younger sibling Eddie (E.G). and they moved to a bigger site and started badging their bikes as Bates Brothers. Those frames were famous for their ‘cantiflex’ tubes, described by Martin Vincent of Classic Lightweights as "a responsive frame of unusually high rigidity while the front fork design was claimed to possess the ability to effectively absorb road shocks despite the short wheelbase and steep head angle."

Licenced under CC BY-SA 2.0 by Sludge G on Flickr

After World War 2 Eddie went it alone, and the legendary EG Bates frames with their Reynolds tubing and decorative lugs were a prized thing to behold. They were still made right up until the company stopped trading in 2002. 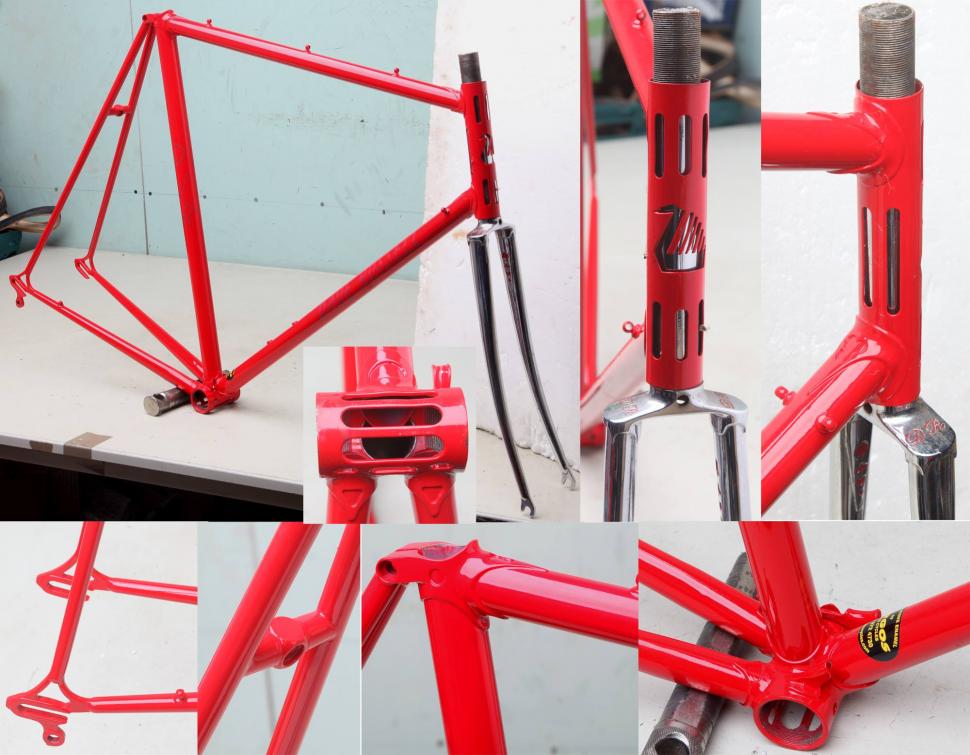 Dave Russell was a highly respected frame builder during the 70s and 80s. His frames were all crafted purely to order, and were mostly built with Reynolds tubing, especially in 753.

Numerous top riders of that era rode his frames to glory, even if they were often branded under different names. Dave started out working for Ron Kitching for many years, before opening his own bike sales and repair shop in Slough where he continued to hand build every frame himself (estimated at around 3,000 in all) before retiring.

Bristol-based Argos have been making frames since 1974, when Arthur Needham first set up his business. Argos are still at it today, making, renovating and repairing their own frames and classics from other brands.

Although Argos frames were popular regionally, and also won several national titles through Stuart Dangerfield, for many years their biggest market was in exporting frames to the USA.

Although he was a relatively small-scale builder, Roy Cottingham was a true master and artist when it came to turning steel tubes and lugs into highly ornate and practical frames.

A jazz-playing chemist by day and master craftsman by night, Roy would craft his lugs and file every single tube by hand and alone in his home workshop in Ringstead, Northants.

Roy was also an accomplished bike racer in his early days, and along with Peter Duker he also founded The League International. Sadly he passed away in his mid 50’s; a craftsman and a true gentleman was lost.

Jack Hearn was a well-known Chilterns based frame builder who started out producing frames from a small workshop in Stoke Poges (near to Slough). After World War 2 he started working at his uncle’s garage, where he drove the local taxi and also repaired bikes. This later led to him setting up his own shop and a very basic ‘jig-free’ workshop to build and repair frames.

From the 50s onwards his frames would grow in prominence, and during the 70s fellow villager Eddie Adkins would win national TT titles on Jack Hearne-built frames.

Born in 1917, Alan Shorter of Barnet was a keen and successful bike racer during the 40s & 50s, until he broke his leg and had to stop racing.

He had always been a great supporter of Barnet CC and its young and upcoming racers, and one in particular caught his attention – Alf Engers, one of the fastest short to middle distance time trial racers Britain has ever produced.

Alan was a superb frame maker, and several other builders worked with him over the years. He was synonymous with Alf’s amazing drilled and fluted flying machines.

The Shorter legacy still lives on through Shorter Rochford Cycles, who once sponsored Graeme Obree; another great rebel of cycling, much like Engers himself. West Midlands-based frame builders and bike makers Major Nichols were building and trading in lightweight bikes from 1947 right up until 2003. Their bikes were a regular fixture on club runs and at races all over the midlands during the 60s, 70s and 80s.

Major opened up his first bike shop just after World War 2, on the site of a bike business previously run by his father. After simply selling bikes to begin with, he taught himself frame building and started to make stock handmade frames.

Over the years he progressed from plain gauge Reynolds 531 tubing through to 753 building, and all were really stylish in build and finish. There are not so many Major Nichols frames still around nowadays, which is a real shame. It’s amazing when you look at what London bike shop and frame builders Condor have achieved, and how they have not only stood the test time, but also prospered.

Monty Young first started trading bikes in 1948, and the company is now under the careful eye of his son Grant – a true family run success story. Condor originally built bikes on site, but in recent years they have started to produce their own frames in Italy. Condor frames have been ridden in the Tour de France, won World Championship medals – and even Mick Jagger was a fan.

Flight of the Condor 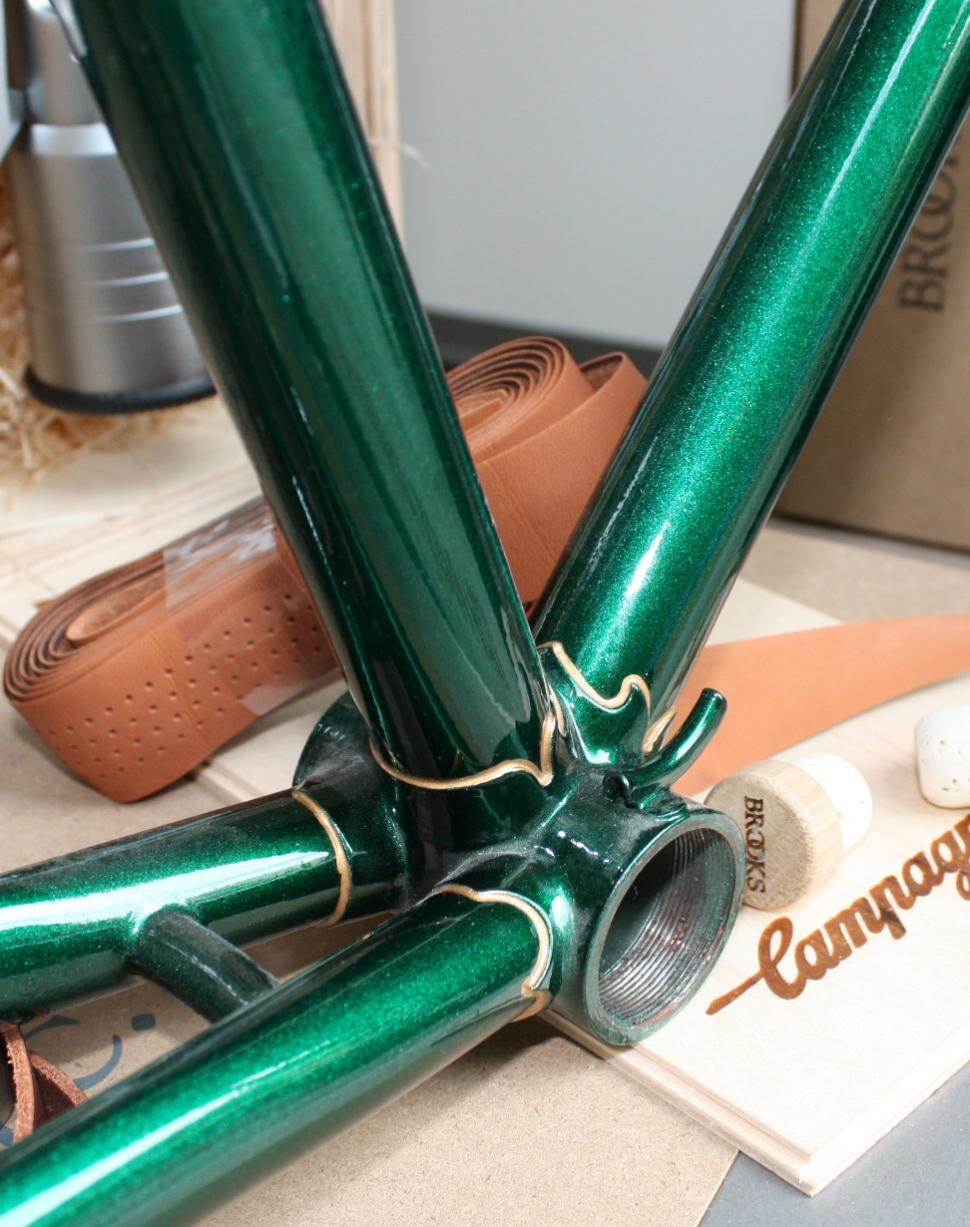 Condor still make up to 2,500 frames by hand per year. Of those a few hundred are totally custom with custom paint, custom geometry or both. 60% are built from steel (including stainless steel) and the rest are custom aluminium or carbon frames.

Condor believes their frames have only grown in popularity since the 80s, and prior to the 2008 financial crash they had some of their highest bike sales numbers ever. We asked Grant Young (now Chairman and the son of Monty Young who founded the company) for his thoughts on the 80s and 90s frame building era:

"In the nineties, we were fighting to build as many frames as we could. There were shops in America that wanted to take the whole production and we couldn't keep up.

“A decrease in UK frame building in the nineties was possibly down to the older generation of builders being unable to keep up with trends.

“It was impossible to teach older frame builders how to build in new materials and with new techniques. We tried to, we brought over carbon and bonding but it didn't really work.

“People went to China, and so we increased capacity by moving production to Italy so that we could make both in the UK and Italy and by hand; and with craftsmen, not on a production line.

“We didn't see a decrease, sales got stronger." 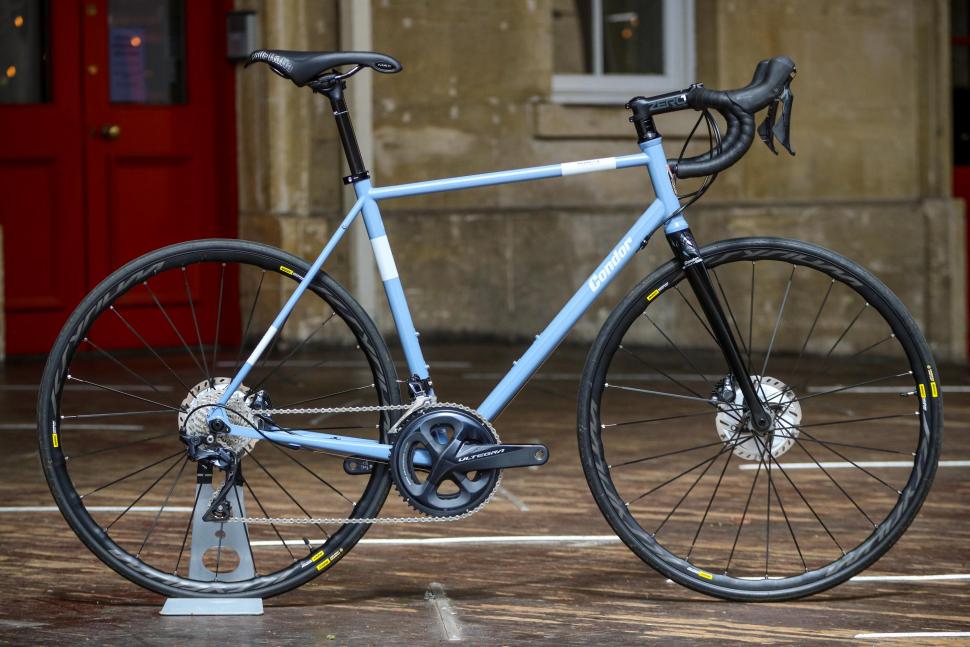 Condor also believe that cyclists have come to realise that a steel frame doesn't have to look vintage. It can look modern, and it won't ride like a frame from the 70s. It will ride better than the cheap aluminium frames of the 90s and the cheap carbon frames of the 2000s, and it will probably weigh less too.

Have we missed your favourite 20th century bike builder from the South of England? Let us know in the comments for the next update, and we'll see you in part 2 for our northern round-up.