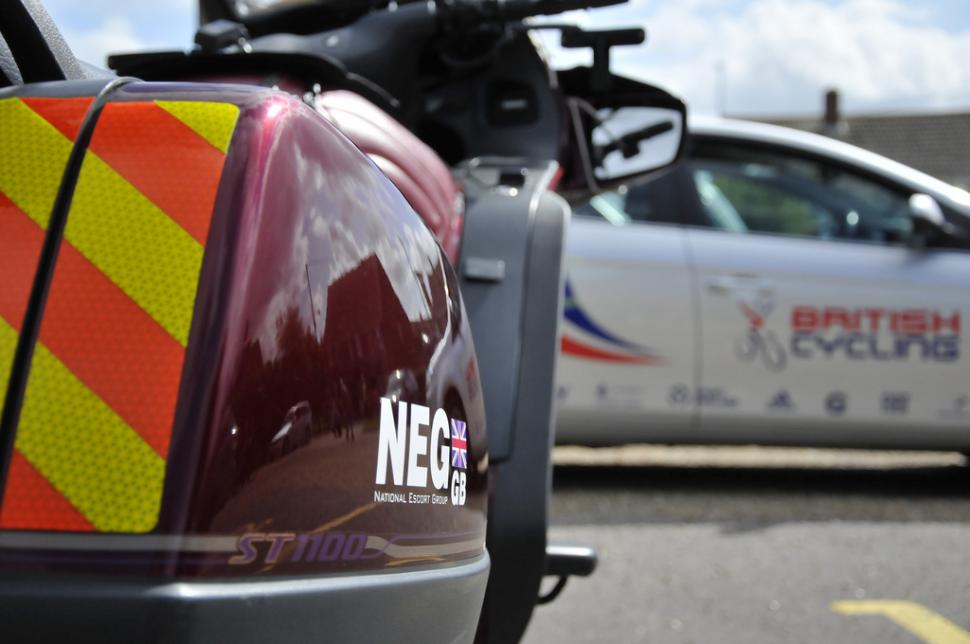 The organiser of a leading sportive has criticised what she terms a “foolish” decision by British Cycling to remove insurance cover for motorcycle riders belonging to the National Escort Group (NEG) for non-competitive events. The governing body, however, says that factors including increasingly strained resources have forced it to ensure the NEG focuses on road racing.

Emma Slevin, co-director of the Endura Lionheart, says that she discovered earlier this month through a third party that the extension of British Cycling’s insurance cover for NEG members to cover sportives had been removed with effect from 1 January.

“This is a foolish, backward step for British Cycling,” she said. “Whilst I understand the demands on such a limited supply of brilliant NEG Marshals – their primary role being to safeguard road racing in the UK – I feel that in order to support the growing demand in popularity of non-competitive events such as The Endura Lionheart, British Cycling (BC) should be encouraging more NEG marshals into the fold, not pulling the rug from under them.

“Having welcomed their presence each year, the NEG Motorcycle Marshals have become part of our event. They truly are a big warm safety blanket around our riders whilst out on course, and this year they will be sorely missed.”

She continued:  “Whilst the safety of a sportive should not be dependent on the presence of the NEG – full risk assessments, good signage, pre-event communication with the event team, riders and local constabulary all helping to ensure as safe a ride as possible – by their own admission BC write that The National Escort Group was formed to provide an accredited group of motorcyclists trained to assist with the safety of events held on the public highway.

“This decision is the wrong one and I sincerely hope that BC have a re-think,” she added.

But in an email to road.cc, British Cycling made it clear that it would not go back on its decision, saying: “A high proportion of road races at regional and national level are reliant on the NEG to provide advance warning to other road users that a road race is taking place.

“British Cycling provide training and resources to the NEG for that purpose and the training is specific to road racing.

“In addition to insurance cover for event organisers across the disciplines British Cycling also provides motor vehicle insurance cover for road race events. In the past this cover has extended beyond road races to sportives but this has recently been reviewed and we have taken the decision restrict the cover to road races only.”

The governing body also outlined the specific reasons why it had decided to restrict cover for NEG riders under its insurance policy to road races only:

The change has been driven by a number of factors including:

· the ever increasing stretch on resources – sportives and road races are growing areas, calendar clashes between the two are more common but from our perspective the priority role for the NEG is in the road race environment

· the training and development pathway is specific to road racing

· the NEG role on a sportive is very different to that on a road race, not all sportives require the support of the NEG

· the majority of sportives, in comparison to road races, are better resourced to arrange their own cover for motor vehicles on their events

· sportive organisers can continue to use the NEG as they of can of course seek their own insurance cover for motor vehicles on their events and the NEG could be included that cover.

NEG riders working on BC road race events have the opportunity for their motorcycles to be covered under the BC vehicle insurance policy.  To receive this cover, the rider must be a member of BC and be the "normal" insured driver of the vehicle. This cover is in place whilst the race is in progress. All fully qualified NEG riders will receive free BC membership at the basic (bronze) level which covers the above membership requirement. Race organisers are required to advise the BCHQ in advance of the event of the registration numbers of the machines of motorcycle marshals.

NEG GB riders operating on a NON BC event should check with the event organiser re insurance cover for the event or arrange through there [sic] own insurance company adequate insurance to cover you for events.