Core Bike 2014 road wheel round up

We've been casting our eyes over quite a few new wheels around the shows this week, so here's a round-up of some of the stuff we've seen at Core Bike. 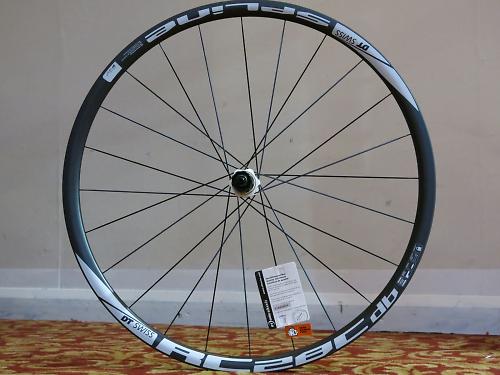 DT Swiss have a new range called Spline, which is actually SP-line, in which the SP stands for straight pull. Got that? It won't be a massive surprise to hear that the feature straight pull spokes then, in a more traditional arrangement that the Tricon wheels.

This is the Spline 28C db. So, a 28mm section carbon clincher rim with a disc brake hub. The Splines are available in 28mm, 38mm and 55mm carbon rims. A tubular rim is an option at 38mm and 55mm rim depths, and disc brake hubs (Shimano Centerlock) can be had with 28mm and 38mm rims. Plus there's 23mm and 28mm alloy rims too. confused yet? 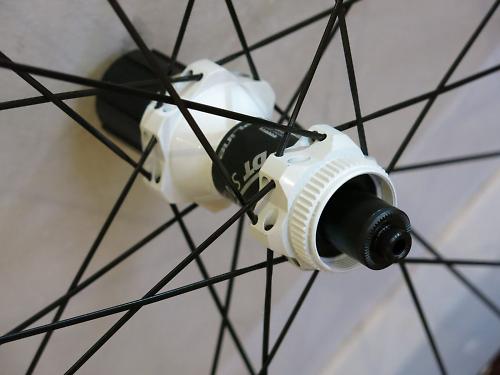 Anyway, the Spline 28C db is a continuation of a trend we've been seeing over the last year or so, which is disc wheels getting lighter, with less spokes. Whereas before now everyone's been running at least 24 spokes, this wheelset is 20 at the front and 24 at the rear. They're laced in a two cross pattern (radial in the non-disc front hub), but the spokes are at about the same angle to the hub as a standard three cross pattern; the straight pull design means they miss the first cross right by the hub. Spokes are DT Aerolite, and the disc rims are a specific design with no brake track.

DT Swiss are distributed by Hotlines. The full range isn't on their site as yet but you can expect a set of carbon Splines to set you back around £1,300. 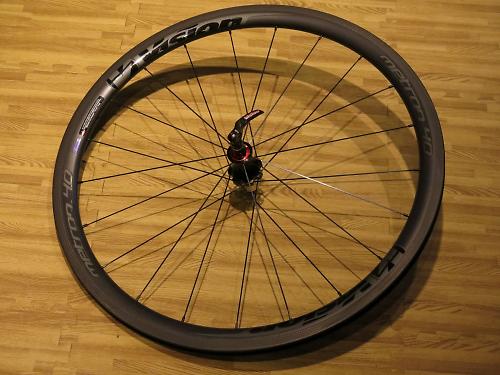 Vision have a brand new all-purpose carbon wheelset too, the Metron 40. The 40mm rim is a popular one, giving a bit of an aero nudge without kicking you into a ditch every time it gets a bit blowy. The Metron is from the rounder-is-better school of aero rim design, with a bulbous profile and a wide rim bed that should be just the ticket for a 25mm tyre like what the pros use these days. 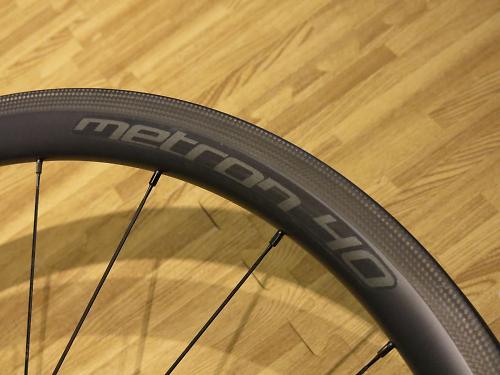 New wheels come by default in disc versions right now, and the Metron is no exception. There's tubular and clincher rims and six-bolt and standard hubs, making four variations; they're all the same price though, £1,499.95. Weight-wise the stated weight for all the wheels is 1,320g, although we're guessing.  The non-disc variants have 18 spokes up front and 21 to the rear, weighted 2:1 to the drive side. The discs are a more standard 24/28 crossed pattern, which will add weight, as will the hub. We'd expect them to weigh in at at least 100g more than the rim brake version. 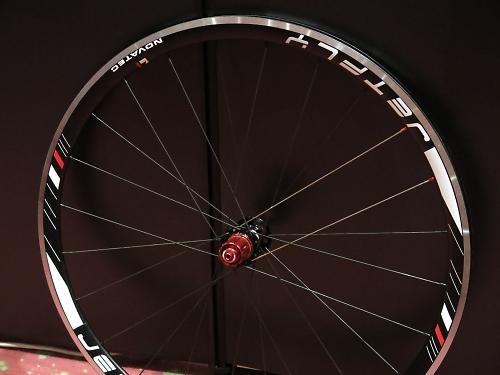 If you want something a lot less spendy but still pretty light, then Novatec might be the place to go looking. You might know the Novatec name from looking on ebay for cheap hubs (I do) but their built-up wheelsets look just the ticket for day-in-day-out performance. 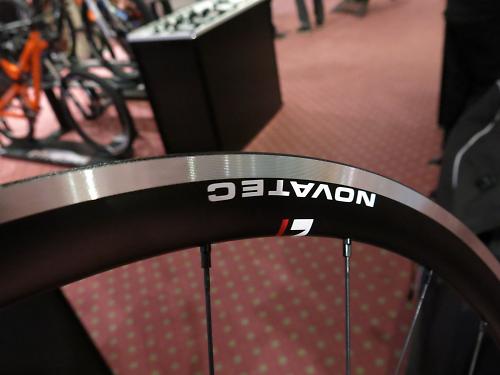 The Jetfly is the one we liked the look of most. This is a 32mm alloy-rimmed wheelset with 20 radial spokes at the front and 24 crossed to the rear. Hubs are Novatec's own design, and the alloy freehub features an inlaid steel strip to stop your cassette chewing its way through the splines. Novatec call it the Anti Bite Guard, and we're assuming they've licensed the design from American Classic who have a patent on something that looks pretty much identical. The design of the hub allows SRAM, Shimano and Campag freehub bodies to be swapped as needed. All bearings are replaceable cartridge units. 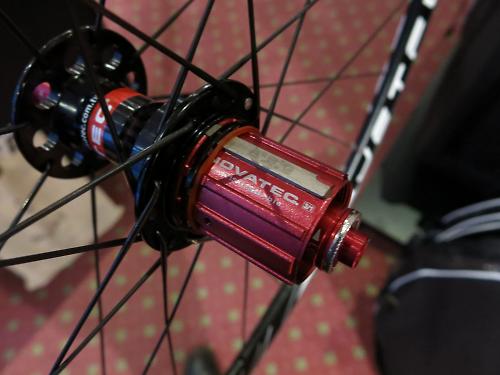 Anyway, that all adds up to a good-looking wheelset with some nice tech, and a claimed overall weight of 1,455 grams. And all for just £359. Not bad, eh? We'll certainly be getting some in for a try. 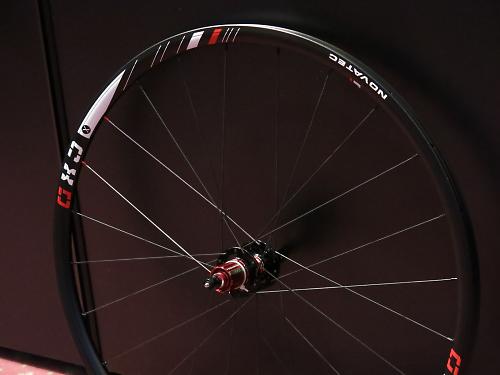 Another Novatec wheelset that looks great value is the CXD, which uses six-bolt hubs and a disc-specific 23mm alloy rim (a 24mm tubular is also available). It's obviously aimed at cyclocross bikes but the 1,445g claimed weight will have plenty of road disc riders eyeing it up too. Again, it has just 20 spokes at the front (24 rear) and again, it's great value at just £349. 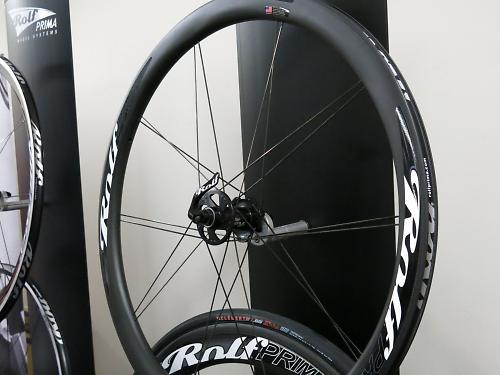 We mentioned the Rolf Prima Ares 4 briefly in the first round up but it's worth revisiting here. Rolf use a paired spoke design on their wheels which they claim neutralises the lateral pull in the rim and allows them to build with less spokes, which is lighter and more aerodynamic. Certainly they have some extraordinarily low spoke counts; the TT8 wheelset has just 10 at the front and 12 to the rear.

The Ares 4 in its non-disc incarnation weights in at a claimed 1,350g which is impressive for a 42mm carbon clincher. That's achieved with a low spoke count (14 front/16 rear) and a titanium freehub body. Rolf Prima, like many manufacturers, have a specific brake pad deign for their carbon rims. 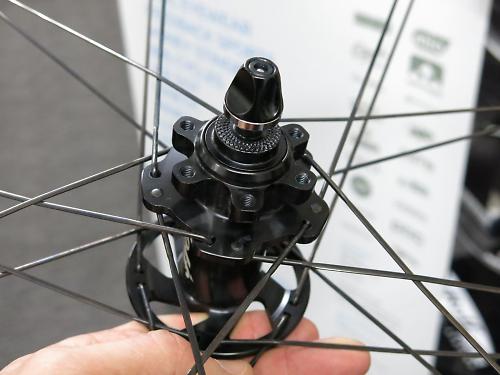 The disc version of the Ares 4 ups the spoke count, but only as far as 20, front and rear. The stated weight of the disc wheels is 1,590g although it's difficult to see where they're losing almost a quarter of a kilo to the non-disc version. They use the same rim, and are a bit more expensive, at £2,099 compared to £1,999 for the non-disc. 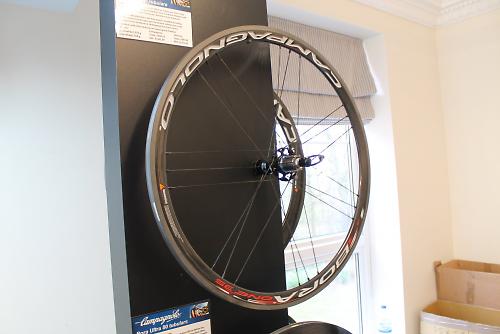 The new Bora 35 wheelset from Campagnolo was on show. This shallower depth is gradually becoming a really popular option with the pros, and also amateur riders. You get most of the benefits of a deeper 50mm section wheel, but the shallower rim isn’t so affected by blustery wind conditions, and is also a bit lighter, making it a better all-round option. The Bora Ultra 35 One wheelset here weighs a claimed 1,260g and Campagnolo reckon it’s stiffer than the Hyperon wheelset. What is really interesting about it is what they’ve done to the braking surface. As we know, braking performance is a real issue with carbon rims. Campagnolo’s approach here is what they dub the ‘Diamond Rim’ - they’ve sanded off most of the resin to get down to the raw carbon, and this is then mirror polished and this, they claim, produces a brake track composed of about 90% carbon fibre. This should provide a more consistent and controllable surface.

Unfortunately the Bora 35 is currently only available as a tubular, there seems to be no plans yet to produce a carbon clincher version. They cost £1,559 for the One version, with regular bearings, and the Ultra with Cult bearings costing £2,576. 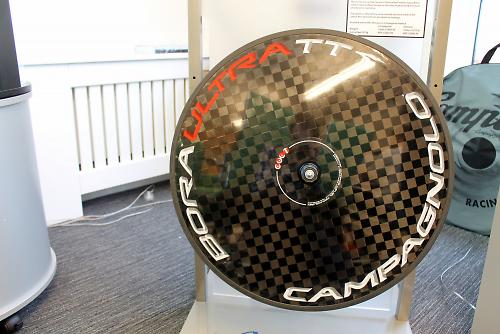 Campagnolo have been busy developing a new disc wheel, the first since the Ghibli was launched. The new Bora Ultra TT disc wheel makes use of some cutting edge carbon fibre technology, TeXtreme . It’s the same stuff Felt have been using in their new F1 road bike. 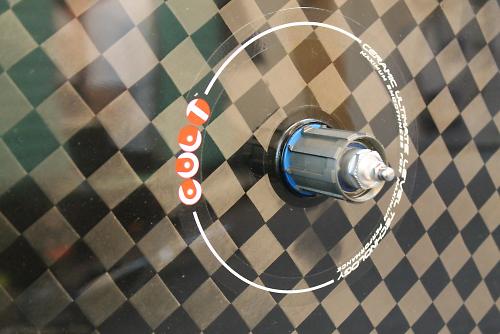 This is an interlacing carbon tape, rather than yarns, an arrangement which is said to produce a thinner construction and requires less resin, contributing to the lower weight and higher level of stiffness. The TeXtrem produces an interesting checkerboard pattern. The wheel weighs a claimed 975g and costs £2,642.99. 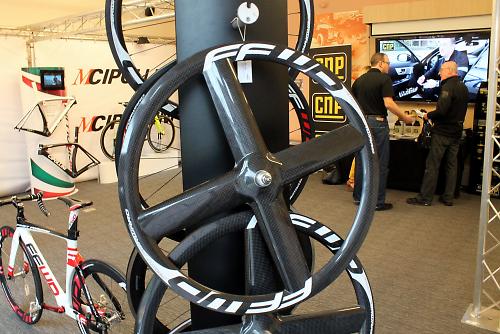 Dutch wheel company FFWD have a new track-specific four spoke wheel out. It’s been developed following feedback from their sponsored riders racing the Six Day track events like the Six Days of Rotterdam  They wanted a fast wheel like the popular Mavic iO five spoke, which is super aero but also nimble and agile enough for the fast pace and sudden changes of direction frequent in events like the madison. They previously only offered a three and five spoke wheel. 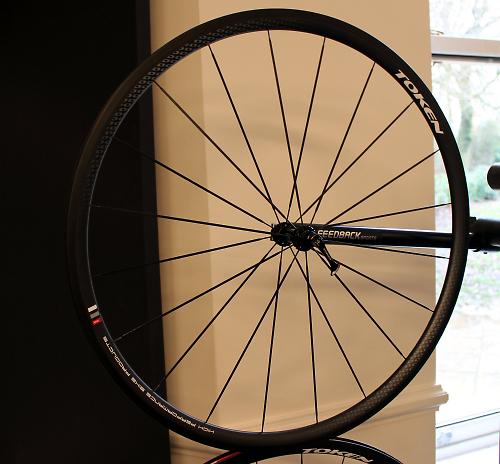 Token make a huge raft of components and accessories, and they also make wheels, for 2014 they’re really starting to expand their range of offerings. This is the Arsenal C28 carbon clincher rim with a, yes you guessed it, 28mm deep rim. They’re competitive on both weight and price fronts, 1,210g and £1,000 respectively. 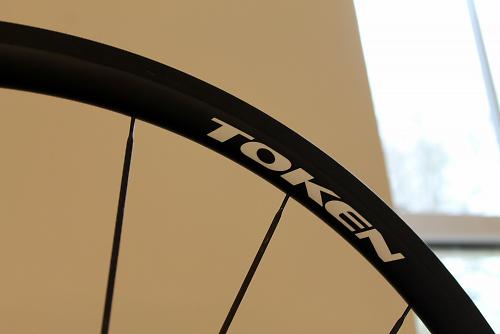 They’re constructed using an AVT (anti vibration technology) which comprises adding an aramid layer into the carbon fibre layup, which is claimed to massively increase wheel strength as well as reducing vibration. The rims are laced to Token’s own hubs, with a ceramic bearing option, using Sapim CX Ray straight pull spokes. The braking surface has been made with an epoxy that is claimed to withstand extremely high temperatures, and is best used with their specially designed carbon rim brake blocks. 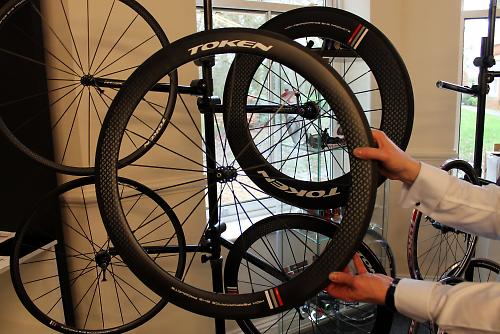 Also on display was a 55mm carbon clincher version, a pair of which weighs a claimed 1,448g. They also cost £1,000. The 55mm can be paired with a 90mm rear wheel, an appealing setup option for triathletes and time trialling, with a 1,600g combined weight. They call that wheelset the Arsenal C59. 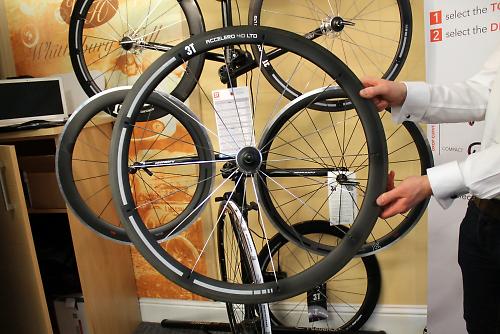 Italian company 3T have added the new Accelero 40 Ltd carbon clincher wheelset to their range for 2014. It’s essentially a carbon clincher version of the previously tubular only Mercurio. The new clincher wheel uses the same rim profile, a rounded shape and 40mm depth, along with the unique ‘spoke pocket’s moulded into the rim. They reckon their rim profile produces better aero results through a wider range of yaw angles - the angle the wind is hitting the rim. It’s actually a 43mm rim and like most of the modern crop of aero rims, it has a fatter, 23mm in this case, rim profile.

The spokes slot into little recesses, moulded spoke pockets, in the rim. This moves the weight of the nipple to the hub, which reduces the inertia making for a quicker accelerating wheel. That’s the theory, anyway. 3T are confident also that the pockets have no ill-effects on the aero performance. The spoke recesses are moulded at the layup stage, they aren’t cut out or anything crude like that. It’s a design that avoids any drilling of the rim, something 3T were keen to avoid. They cost £2,019.98 for the pair.