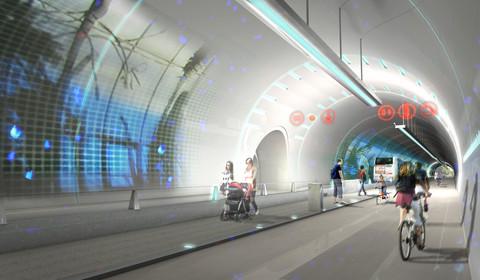 Chris Froome and other stars of sport to take on 1.8km long tunnel, built at a cost of €282m
by Simon_MacMichael

The opening stage of this year’s Critérium du Dauphiné, an individual time trial, will feature as part of its route a 1.8km long pedestrian and cycle tunnel in the city of Lyon.

Opened last December, it may be Europe’s longest such facility. The Combe Down tunnel in Bath is 1.7km in length – although while that is solely for those on foot or on a bike, the French one does accommodate a bus lane too.

Officially known as the Tunnel de la Croix-Rousse, the tunnel is located beneath the hill of the same name in the city’s 4th arrondissement, to the north of the city centre, and links the banks of the Rhône to the east with those of the Saône to the west.

Costing €282.8 million, the tunnel, which also goes by the nickname Le Tube, is 10 metres in width and accommodates a bus lane, segregated by a barrier from the adjacent pedestrian path, alongside which runs the cycle lane.

It runs parallel to an existing road tunnel, with the city exploiting works that had to be undertaken to upgrade it to conform with the latest security standards for such infrastructure to build the new route.

Interior design, which includes still images and moving graphics, was undertaken by the design agency Skertsö. You can see some pictures from the opening of the tunnel on 5 December here.

One critcism of the tunnel is that some of the buses using it still run on diesel, although the city points out that it is currently undertaking a trial of four different types of hybrid bus with a view to deciding which to choose.

The two videos below show the tunnel, respectively, from a pedestrian’s and a cyclist's perspective – both were shot in the days following the opening in early December.

The idea is that those on foot stick keep to the centre of the tunnel, while those on bikes are to one side on the two-way cycle track – that’s not quite how it works out in the second video, although perhaps that’s just down to the novelty of it having just opened?

The 2014 Critérium du Dauphiné starts in Lyon on Sunday 8 June with that 10-kilometre individual time trial that includes the tunnel, and concludes on Saturday 15 June at the Alpine resort of Courchevel.