Sand specific bike from the Netherlands that might not be just for the beach, for shore
by VecchioJo

We do like a bit of beach racing at road.cc, well, when we say like, we mean we like it when it stops. Having done a proper beach race on the shores of Holland and the inaugural UK version in Wales we can categorically say it’s some of the hardest racing we’ve ever done. Despite there being a lack of hills battling into a block headwind along kilometre after kilometre of sucky sand is tough work. 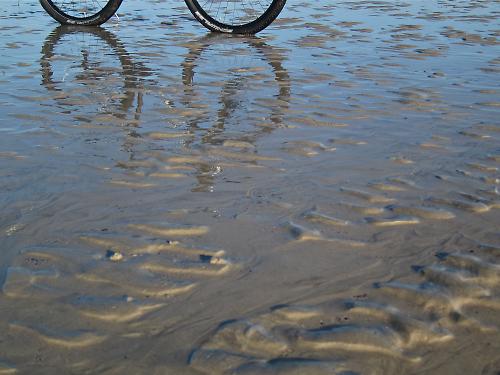 Despite being pretty much unknown about in the UK beach racing is a big thing on the northern shores of the Continent, where races attract hundreds of riders and teams have specialist riders. Like Koga, who consider the scene big enough to build a specific bike for the rather singular discipline, and have come up with something that’s akin to the bastard love-child of a road bike, a cyclo-cross bike and a 29er mountainbike. 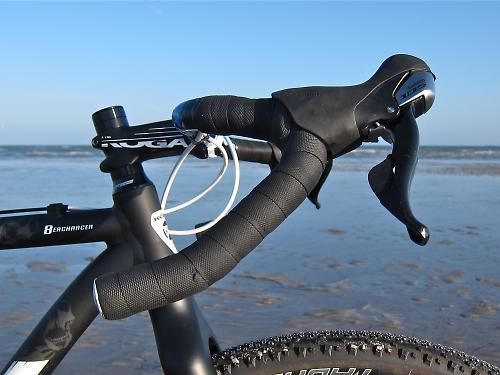 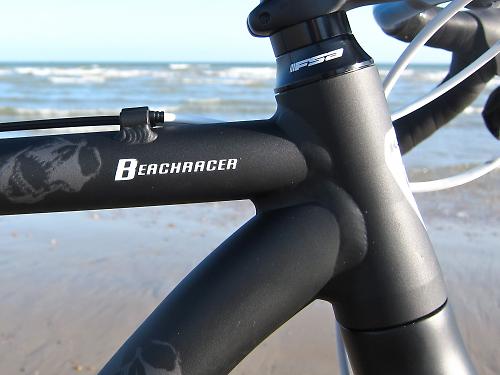 The frame is made from 7005 alloy and has a KOGA Pinza full carbon front fork slotted in the front. It’s a bike deliberately designed to be long low and racy to cheat a stiff breeze off the North Sea. The top-tube is considerably more stretched than you’d expect, this 54 bike we have in to test has a 556mm effective top-tube which is a length more commonly seen on the next size up framed road or CX bike. That head tube is also rather diminutive, it’s no sit-up-and-beg endurance head-stock that’s for sure. At only 105mm it sets the front end deliberately low to force the rider into an attacking and wind slicing position. 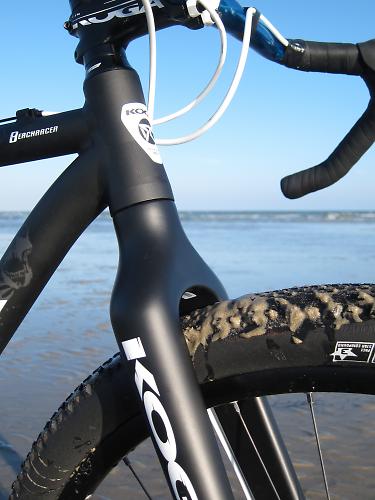 The Pinza full carbon disc fork is designed to be sleek and aerodynamic with slim legs and very little clearance between the fork crown and the 29x2.1 tyre, again to keep the bike hunkered down and headwind averse. A seat angle of 74.5 degrees makes it a little steeper than the norm on a cyclo-cross bike, forcing the body forward into an aggressive position and the head angle of 71 slows down the steering a tiny tiny bit for stability on grabby soft sand, and because there’s not many corners you need to whip round on a beach. 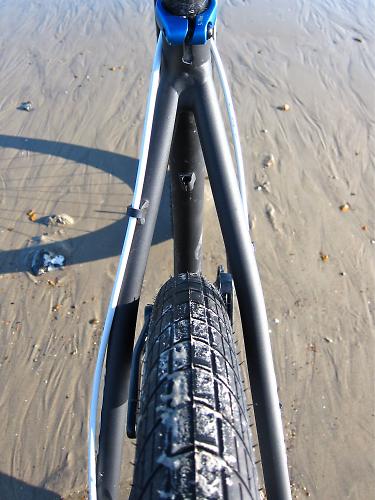 The rear end is devoid of much decoration, the seatstays have no bridge and the chainstays have a tiny little reinforcing bridge by the bottom bracket both designed to help with sand clearance and to deny it anywhere to collect and clog with Machiavellian intent. 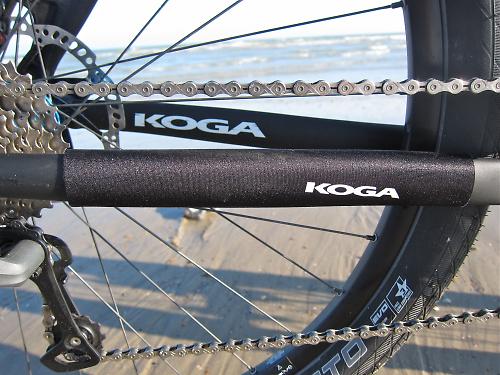 The frame comes with two sets of bottle bosses but no mudguard or rack eyelets, the clue’s in the Racer bit of the name, there’s a replaceable derailleur hanger and a KOGA neoprene chainstay protector though. 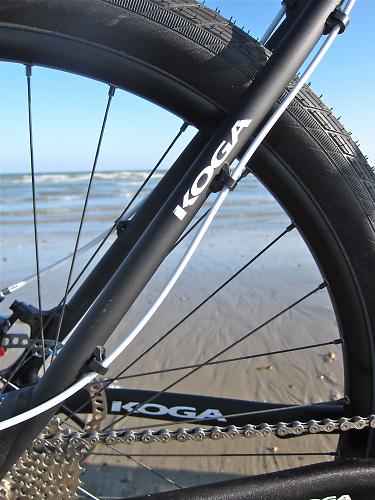 The rear brake and gear cable follow the top-tube to keep them out of any sea-spray and run a full outer down the seatstays for further protection and although the Beach Racer comes with a single ring chainset cable stops are provided for a front derailleur should you wish to fit a double chainset and extend the bike’s range further than the dunes. 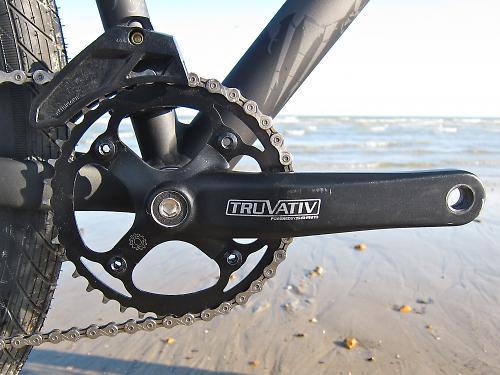 What gears there are come in the form of a Shimano 10spd build, and 10 speed is all you get, there's not much gradient on a beach that requires a massive gear spread. The right hand Shimano 105 STI moves an Ultegra rear mech across a Shimano Deore 11-32 cassette. The left hand STI only pulls the brake as the front derailleur isn’t there, instead an E-Thirteen XCX chainguide stops the chain from bouncing off the single 38 tooth chainring bolted to the srangely short-cranked 170mm Truvativ E400 chainset. 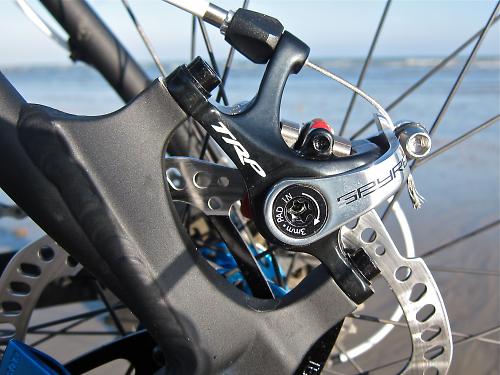 Brakes are Tektro Spyre cable discs, fresh from their recent voluntary recall, we liked them even before they discovered the safety issue that occurred if you were careless enough let the pads wear down to nothing. They’ve got that fixed now. 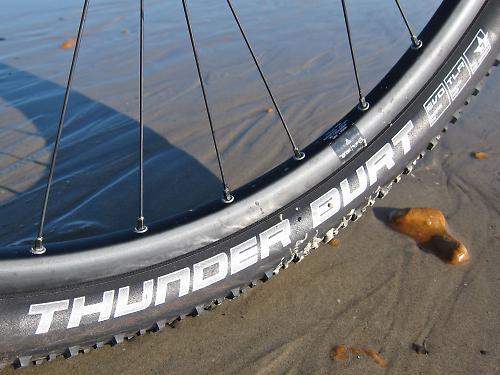 Koga’s own blue disc hubs are laced to Mach 1 Neo Disc rims, the front tyre is a tread light Schwalbe Thunder Burt 2.1 tyre whilst the rear is a grip free but wide Supermoto 2.35 Evolution tyre. That’s quite an unusual tyre combo there, it’s very sand specific, the minimal treaded front tyre giving just enough grip for steering and the wide slick rear allowing the bike to float over the sand rather than sink in. 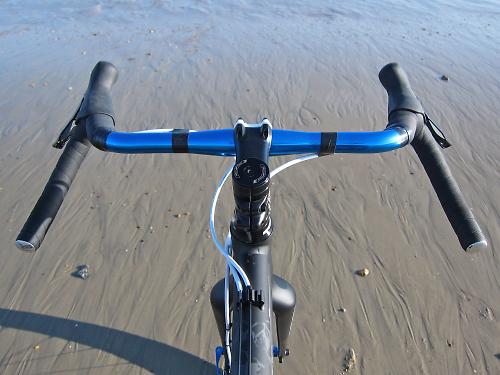 Koga’s own brand kit supplies the finishing details with a CroMo railed saddle, alloy 27.2mm seatpost and Carnero oversized stem. Those swanky looking blue alloy bars are Koga’s own too and come with a shallow drop and wide flare for control in the dunes. 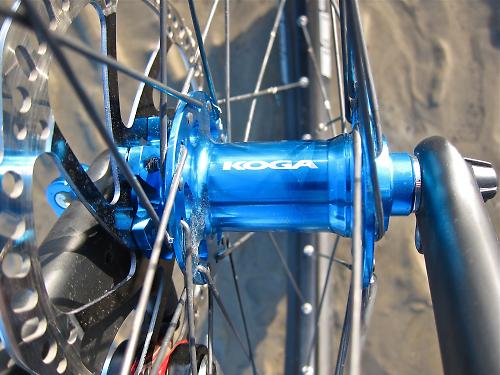 Despite the Beach Racer’s beautifully specific design brief with a bit of tinkering it could turn out to be quite a versatile machine. We’re going to play around on those tyres for a bit, probably fall off in the mud and then experiment with different tyres, swapping them for something mountainbikey to turn it into a Monster Cross thing, then try skinnier rubber to sample a more cyclo-cross flavour and maybe something slim and slick to see how it performs as a fast Pro Commuter. So for your £1299 you could get three bikes out of it, but for now, to the beach, it’s just about ice-cream weather. 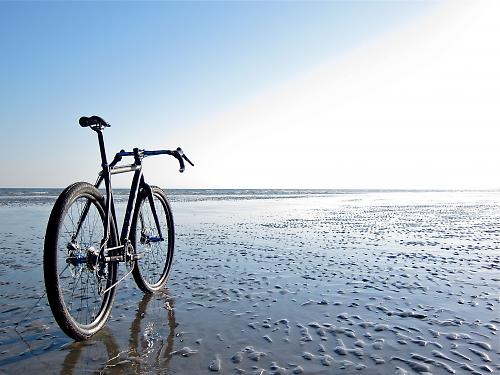