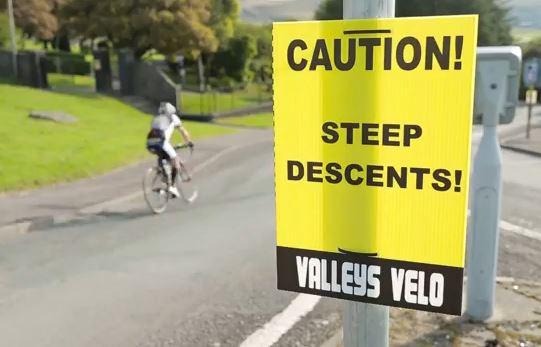 Dozens punctured on descent of Bwlch due to drawing pins - thankfully, no-one was injured
by Simon_MacMichael

The organiser of the Valleys Velo sportive in Wales, targeted last Sunday by saboteurs who spread drawing pins on the descent of the Bwlch causing dozens of cyclists to puncture, have appealed for help in tracking down the perpetrators.

On Tuesday, we reported how one rider, Richard Manning, had told us that he had punctured at 80 kilometres an hour and that he discovered that the drawing pin responsible appeared to have been painted black in an attempt to camouflage it.

Organiser Jamie Rowland of The Bike Doctor, described his reaction when he heard about the incident.

“I couldn't believe it when I first received the call to say what was happening,” he said. “My heart sunk thinking of the riders and their safety who were unfortunately caught up in the unfolding events, all their training and effort undone by some mindless idiot!

“Our first priority as always was rider safety,” he went on. “The marshal point on top of the Bwlch was contacted immediately to warn the riders of the tacks and slow them down before they tackled the descent!”

Swift action to ensure the tacks were removed thankfully meant that no-one was injured, as Rowland explained: “All available marshals and volunteers were immediately sent to the scene with brushes along with the event vehicles and course mechanics. St John [Ambulance] were already stationed at the Bwlch, thankfully their assistance wasn’t required as no accidents had occurred thankfully!

“Most riders had already fixed their punctures and were on their way, the reminder of people were given free tubes and help given to change their punctures where required. The spirit and camaraderie of all the riders involved after what had unfolded was truly remarkable!”

It is believed that whoever spread the drawing pins on the road did so while the event was in progress.

Rowland said: “Whilst the changing of inner tubes was carried out, marshals and volunteers were busy directing riders and sweeping the section of road working their way down the Bwlch.

“It soon became apparent that the first wave of riders didn't suffer any punctures, this along with the distance covered by the tacks has led us to believe they were scattered from a vehicle during the event shortly after the first wave had passed through.”

He confirmed to road.cc that police are now involved, and said: “We are appealing for anyone who has any information regardless of how little or insignificant they believe it to be to please get in touch with us,” he continued.

“Did you see any strange behaviour on that section? Please wrack your brains! We also would like to speak with the first rider to puncture, to narrow down the time of the incident, if that was you please get in touch.

“We are doing all we can to find the perpetrators, with a time scale of events and local CCTV footage of passing vehicles we will be able to identify the vehicle and find the guilty party!

“We have already discussed how we can put control measures in place and remove the chance of this being repeated again next year after learning from this incident.”

You can contact him via email if you have any information that may help track down the person or persons responsible.

He added that next year’s third edition of the event “has got a real tough act to follow, but one thing you can guarantee on is that there will always be ‘a welcome in the hillsides’!”

Entries for the 2015 Valleys Velo are due to open today, and ratings on the Cyclosport website suggest that despite Sunday’s attempt at sabotaging the event, many participants will be returning in 12 months’ time.