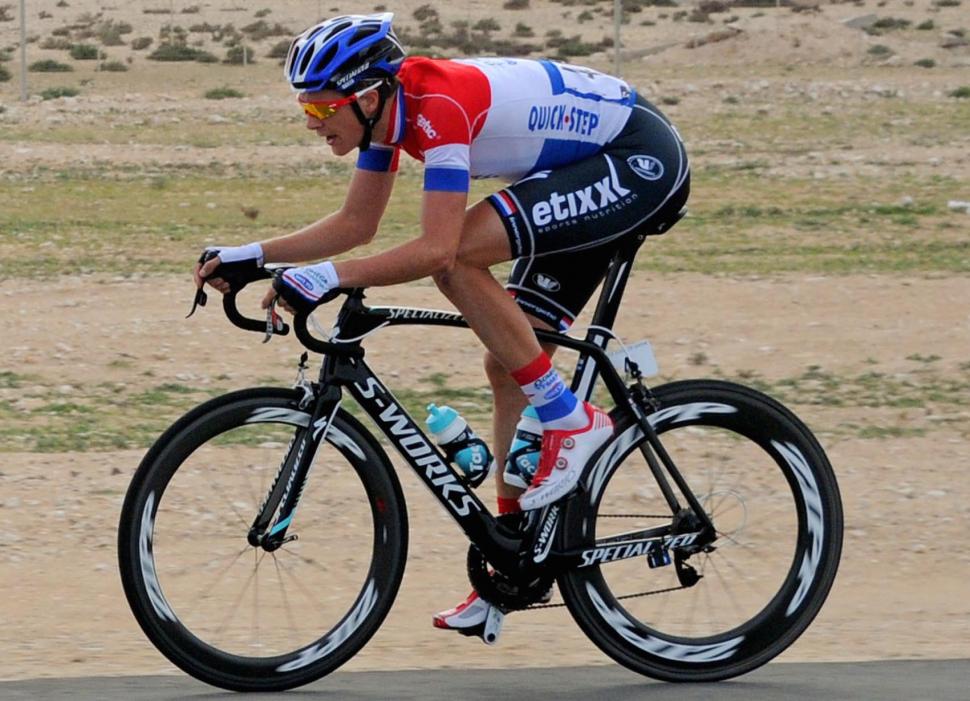 Want to ride faster? Hunker down on the hoods, say researchers

A paper published by the Institution of Mechanical Engineers says that gripping the hoods and keeping your forearms horizontal can reduce the required power while cycling by 13.4%, while lowering your eyes and head can actually increase drag when you are using the drops or short handlebar extensions.

The findings are contained in a paper titled Aerodynamic performance and riding posture in road cycling and triathlon, by Nathan Barry, David Burton, John Sheridan, Mark Thompson and Nicholas AT Brown.

The testing was done at the Monash University Wind Tunnel in Melbourne, Australia, with a constant wind speed of 12.5 metres per second (45km/h, or about 28mph) and the rider aligned with the airflow at a yaw angle of 0°. In other words, the bike and rider weren’t subjected to crosswind.

The researchers tested nine different postures: five with the rider’s hands on either the hoods or drops, and four more with the rider using short-reach aerobars. These aerobars were of a type that can be used in draft-legal triathlon, not extending beyond the brake levers, but you can’t use them for road racing.

Okay, let’s cut to the chase. The researchers used a normal hands-on-hoods ride position as their reference posture, and that was the position that created the highest drag. The power required by the bike and rider they used, based on the above conditions, was 430 W.

Moving from the hoods to a traditional drops racing posture resulted in quite a small saving, bringing the power required down to 417 W.

Moving into a posture on the drops but with a crouched torso – with arms bent to lower the torso angle – brought the power required down to 385 W.

As mentioned up top, gripping the brake hoods while keeping the forearms horizontal resulted in a 13.4% reduction in required power compared to the reference posture. In this position, the power required was 372 W, easily lower than either of the postures measured with the hands on the drops.

Our picture of Niki Terpstra doesn't quite show this position. He's gripping the hoods and his forearms are angled quite low but they're not horizontal.

The findings fit with what we were told by Jurgen Falke, Merida’s Head of Design, much earlier in the year when discussing the Merida Reacto Evo Team. He said that their testing showed that the most aerodynamically efficient position you can ride in without aerobars is with your hands on the hoods and your forearms flat. I was sure we’d included that little nugget in one of our stories, but I can’t find the reference, so maybe not.

Of course, you might have suspected this yourself from just going out there and riding, but these results confirm it.

Not surprisingly, the researchers found that the power required was lower still when using the aerobars, although that's not an option in road racing. In a typical aerobar position, as used in draft-legal triathlon, the power required dropped to 365 W, then down to 358 W with the rider’s head lowered and shoulders shrugged.

The lowest power required was 363 W – a 16.7% reduction over the reference posture – and that was while the rider was using the aerobars with his head tucked between his arms, although that might not be a realistic position for riding out on the road.

Interestingly, when the rider lowered his head while using the drops with a crouched torso, the power required rose significantly from 385 W to 403 W.

“This refutes the perceived aerodynamic advantage assumed for the common practice of athletes dropping their head in periods of high intensity,” say the researchers.

However, they acknowledge, “It is possible this effect is caused by the presentation of a more bluff head/helmet to the flow and may be associated with the geometry of the test helmet.”

If you translate all of that into time savings, the researchers say that on a flat 40km course (about 25 miles) with little wind and the cyclist riding solo at a constant power output of 300 W, he’d save about 45secs by swapping from riding upright on the hoods to riding on the hoods with horizontal forearms.

The paper was published in the Proceedings of the Institute of Mechanical Engineers, Part P: Journal of Sports, Engineering and Technology. You can read the full paper, which is much, much more detailed than this short article and includes a description of the testing methodology, here.