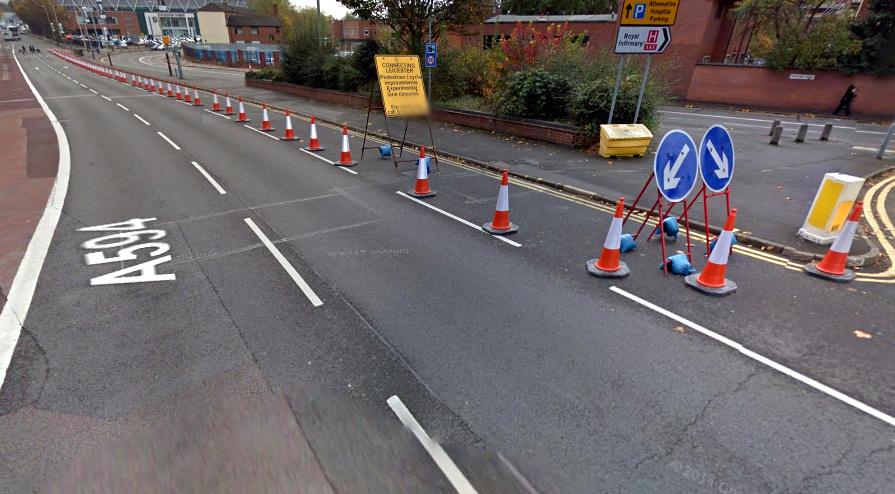 What happens to motor traffic if you close a lane of a busy city road? In Leicester, they've been finding out by allocating a lane of a major city artery to pedestrians and cyclists.

In an experiment that ends February 10, Leicester mayor Sir Peter Soulsby closed a lane of Welford Road, coning it off so it could be used by non-motorised road users.

The Leicester Mercury reports that the mayor said he wanted to see what impact it would have on traffic if the lane were to be permanently turned into an extended footpath and cycleway.

Council officers will now spend a few weeks "crunching the numbers" to decide whether the change should be permanent.

He said: “I want to closely examine the impact it has had on traffic at peak time.

“At off peak times there has been little effect at all but it is crucial that we see what happens at rush hour.

“We are very clear that giving over a lane of Newarke Street to pedestrians and cyclists has had minimal impact on traffic flow.”

If the numbers come out favourably, the council will draw up plans to widen the footpath and add a separate cycle lane in place of the current left hand lane between Newarke Street and Mandela Park.

But the idea of even experimenting with traffic flow is anathema to some. Motorist Mark Radymski created a petition against the lane closure which has garnered more than 1,500 signatures.

The city's cyclists have supported the trial. Eric Ludlow of the Leicester Cycling Campaign Group said: “The experiment in our view was working.

“We spent some time at the road expecting to be able to chat to motorists as they were stuck in the rush hour traffic.

“It didn’t happen. I hope the mayor presses ahead with it.”

Opposition Tory councillor Ross Grant said: “The experience of most motorists has caused problems especially in conjunction with some of the mayor’s other schemes.

“He tells us Newarke Street has had no impact on traffic. It has so I don’t have any faith in the way the numbers will be crunched.

“It perhaps makes sense to lift the restriction before the New Walk Centre is demolished later this month but whatever replaces that will change the whole situation anyway so the experiment’s been a bit of a waste of time.”

The possible effect on motor traffic has been the basis of some of the most vocal opposition to London's planned east-west and north-south cycle superhighways.

When the plans were announced Richard Massett of the London Taxi Drivers Association claimed they would "make driving a taxi or any other kind of vehicle a nightmare because journey times are likely to increase dramatically" by reallocating road space to cycling.

Leicester's experiment is on a smaller scale than London's plans for Victoria Embankment, but traffic experts will be watching the conclusions closely.