Peter Sagan is getting pretty used to riding custom painted race bikes, he’s had more than his fair share in the last few years. With the move to Tinkoff-Saxo, his new bike sponsor Specialized has been flexing its creative muscles, and just delivered this custom painted camouflage themed Venge.

Someone at Tinkoff-Saxo must really like camo, because the team famously sported a camo outfit at an early season training camp in Gran Canaria. There was some speculation they would also race in the kit, but that hasn’t happened, the team instead reverting to an updated version of the yellow and blue outfit it used last year. 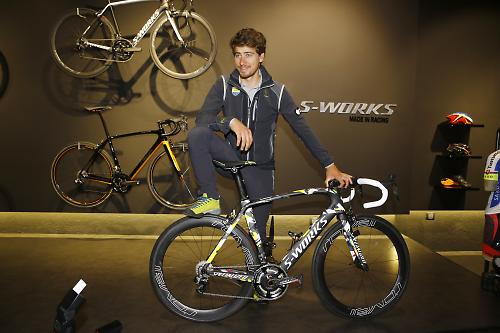 “Specialized has personalized my bike and I am proud of it. I really like the colors and the fact that my official trademark has been included. I hope that this bike will bring me luck,” said Peter Sagan on receiving the new bike.

Sagan was gifted the new bike just before Milan-San Remo at the weekend, and it had its first outing in the 298km “la Primavera.” He finished fourth. Sagan has been riding a Venge, the company’s aero bike, also favoured by Mark Cavendish, since the beginning of the season. It’s a natural choice over the lighter Tarmac as the aerodynamic gains will be appreciated in breakaways and sprints, the sort of riding that marks Sagan out as an exciting racer.

The bike is kitted out with the same components as the rest of the team, and it’s a bit of a mix because the team buys the kit it wants to use, rather than being sponsored by a component manufacturer, like many teams are. Shimano Dura-Ace Di2 shifters, mechs and brakes combine with an FSA K-Force Light crankset with an SRM Powermeter. FSA is also supplying the team with handlebars, stems and seatposts, but Sagan is opting for a Zip Sprint SL stem - the team used Zipp components last year, so they must have had a few spares knocking about. 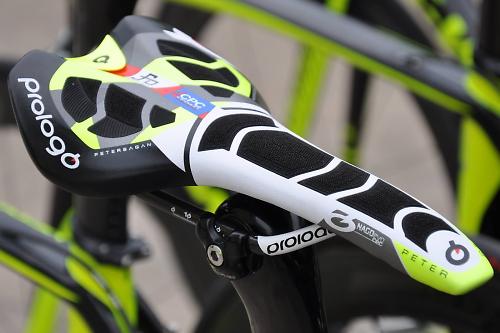 Peter Sagan’s saddle of choice is a Prologo Nago Nack, and the Italian company has produced this saddle to match the Venge’s paint job.

1
Cyclist driven into by Range Rover driver blasts "victim-blaming twaddle" from police who initially refused to take action
2
"Unacceptably gross": Peloton cyclist's complaint over relative leaving bike in a sweaty mess goes viral
3
Pro cyclist no longer rides alone after two 'bikejacking' attempts as violent incidents increase
4
road.cc Recommends gets refreshed with 14 brilliant products
5
Driver who killed two cyclists during charity ride “didn’t understand severity” of incident, says prosecutor
6
Near Miss of the Day 809: “Just doesn’t get closer than this” – Cyclist squeezed between van and kerb at bike lane pinch point
7
Dual carriageway time trials suspended after cyclist killed on A11
8
Road rage motorist assaults cyclist and steals his camera after accusing him of ‘not riding in the bike lane’