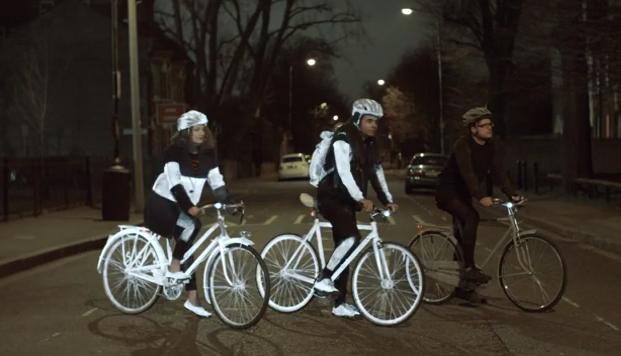 Volvo has waded in to the cycling safety debate and familiar waters with Life Paint, the latest piece of technology for cyclists to wear to help those in vehicles see them on the roads.

Earlier this week we reported on Volvo’s offer of free Life Paint for cyclists and almost inevitably Volvo’s move has drawn criticism from some cycle campaigners sparking, among other things, an online petition.

Nonetheless the freebies have flown off the shelves, with Spitalfields' bike shop Peloton & Co shifting 500 cans in two days, with hundreds more phone requests from as far away as Australia.

However, while Volvo asserts its laudable aim to reduce serious injury and deaths caused by its new cars to zero by 2020, concerns have been raised over the efficacy of the product in terms of improving safety, which appears not to be backed by any research. Meanwhile the video it produced to market Life Paint is criticised for overplaying cycling risks.

Mikael Colville-Andersen, CEO of Copenhagenize Design Co., started the petition, calling for Volvos to be sprayed with Life Paint.

He says: "Everything about the life paint campaign is classic smokescreening from the automobile industry.

"Life Paint is simply a way to shift the focus from a failed product that is under fire and place it on the vulnerable traffic users. Pure victim blaming."

He adds: "When you look at things rationally, as I tend to do, you see 35,000 people killed by/in cars in both the EU and the US each year. A 9-11 each month for at least the past 60 years. God forbid if THAT fact starting gaining purchase in society."

Studies have shown increasing visibility improves detection of cyclists - via reflectivity at night or bright colours during the day but there's little evidence of the effect this has on collisions and injuries.

Colville-Andersen, meanwhile, points out evidence from a 20-year Australian study that cars 'lower on the visibility index', like black, blue, grey, green, red and silver, are more likely to be involved in road accidents.

He added: "Where are the Volvos of the world promoting motorist helmets, reflective paint on cars, airbags on the outside of cars that the Dutch have been working on since 2007 and yes, health warnings on cars, etc?"

Jamie Osman, shop manager at Peloton & Co in Spitalfields, East London, said they received 500 samples last Friday, and on Sunday all were gone. Since then, he said, the phone has been ringing constantly with requests, around 400-500 calls at his estimate, as well as emails, Facebook enquiries and requests from Australia and the US asking them to post samples.

He said: "I don't think anyone was prepared for how big it was."

"We have had lots of people posting on our Twitter page and Facebook after they have sprayed it on their clothes and helmets, saying it is fantastic, a great thing to have as prevention. Everyone I have seen say it has been nothing but a good idea."

"There is a lot of talk on blogs about shifting blame but there's always going to be people that aren't happy."

The Volvo Life Paint marketing video says more than 19,000 cyclists are injured in the UK each year, and features cyclists citing daily brushes with calamity. One interviewee says: "Putting something on that will make you scream out to drivers like me is a fantastic thing."

However the CTC and London Cycling Campaign raise concerns over placing the onus on cyclists to make people see them, and the risk of exonerating drivers from responsibility.

Rosie Downes, Campaign Manager at the London Cycling Campaign, says: "Life Paint and its accompanying marketing campaigning is a slick idea, but will it reduce road danger? We don’t think so: collisions aren’t caused by cyclists not wearing reflective paint.

"The video tells us that cyclists need to make themselves visible, but neglects to mention that drivers who are not paying attention can and do hit anyone, whatever they are wearing. The money spent on this campaign – and on the product itself – could be much better spent on concrete measures to reduce road danger, by improving street design and tackling driver behaviour – not giving drivers a reason to take less care."

Downes referred to the Michael Mason case, the man killed while cycling on a brightly lit Regent Street by a driver who hit him from behind. The Metropolitan Police decided not to prosecute the driver, citing Mason's lack of hi-viz as a rationale.

She said: "Cyclists should not have to dress up in hi-viz clothing or paint themselves reflective to protect themselves from careless driving – or to be protected by the law."

CTC Policy Officer, Cherry Allen, said: "Have Volvo researched this product? Has it genuinely been shown to be an effective road safety measure? If any hi-viz/reflective accessory (or paint!) makes people feel safer and more likely to take up cycling, that's a good thing, even if it doesn't really make much difference to their personal safety.

"While a lot of road safety inventions for cyclists are well-meaning (and some not much more than gimmicks), they're no substitute for tackling the real threats  - e.g. speed, motor traffic volume, poor driving behaviour, bad infrastructure and lorries, etc.

Rooke said Life Paint was a pilot campaign "to help us understand the reaction towards the concept", adding greater research will be needed to understand the benefits. She said: "If Life Paint saves the life of just one cyclist it will have proved beneficial."

"We will continue to invest in developing ever more sophisticated technologies to avoid potentially dangerous situations. Our work on autonomous driving is also a step towards this goal. Driver error is a factor in the majority of road accidents so autonomous driving looks at reducing this risk."

Among Volvo's safety innovations are passenger airbags, and collision avoidance systems with automatic braking. Volvo also introduced a tag system, connecting cars with an app on a cyclist's smart phone, similar to the controversial Cycle Alert system, the downsides being a reliance on the cyclist having the app and carrying a charged, switched on smart phone, and a special helmet which produces a warning light when collision is deemed imminent.