Swiss brand BMC has unveiled its 2016 road bike range, and while there are no brand spanking new bikes, there are a host of smaller specification changes, new colours and an increase in the disc brake choice.

The big change for 2016 is that the GF01, the top level model in the GranFondo endurance/sportive range, is available only with disc brakes. We’re seeing more manufacturers modify endurance and sportive bikes with disc brakes and they seem to be proving popular with customers, judging by the good sales that some brands are reporting and the bikes we’re seeing out on the roads. There are three GF01 models in 2016, each specced with Shimano hydraulic disc brakes and a choice of 105, Ultegra or or Ultegra Di2. There are compact 50/30t chainsets across the range coupled with 11-32t cassettes, something we’re seeing a lot more on bikes like these, which are going to make it easier to tackle even the hilliest sportive you might want to enter.

GF02 in choice of disc or rim brake builds 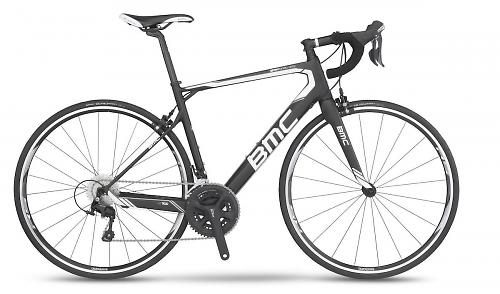 Step down to the more affordable GF02 and your choice of brakes includes widens, because as well as disc brakes it's available with caliper rim brakes. This frame shares the same tubing profiles and geometry as the more expensive GF01, but uses a less expensive carbon fibre in the layup to allow BMC to offer more attractively priced bikes. One key difference is the cable routing, the GF01 has internally routed cables, the GF02 has externally routed gear cables. Then are two disc-equipped GF01 models, which BMC describes as “bright, fresh colors, attractively priced, and highly versatile.” Both bikes have rack and mudguard mounts, making them ideal as a winter training bike or for commuting, perhaps even touring. Brakes will be mechanical Shimano discs. The GF01 will be available in six sizes.

The TeamMachine is available in three guises, SLR01 at the top, the mid-range SLR02 and the SLR03, the most affordable version of the frame. The SLR01 is available at four equipment levels for 2016, starting with Ultegra and rising to Dura-Ace Di2, and there's a new full painted version, in red. BMC has never offered a full painted frame before, it has always made the carbon weave a part of the finish.

And don’t forget this is the same frame that is raced by the BMC professional race team, with a frame weight of 790g putting it right up there with the lightest frames currently raced in the professional peloton. The mid-range SLR02 is also offered in a wider range of colours including a smart blue that we think should look really good in the flesh. The SLR02 is a bit heavier (950g) and cheaper than the SLR01, but shares a visually identical frame, including that massive down tube and dropped seatstays. BMC has obviously been looking closely at the people buying and riding this model and has tweaked the specification, adding an 11-32t cassette to the cheapest 105 model which should make even the steepest climbs rideable. There are three builds, 105 through to Ultegra Di2. road.cc tested the SLR03 recently and you can read the full review here. The SLR03 uses cheaper carbon fibre, leading to increased frame weight, but more importantly than that it means the price tag is much easier to digest. Prices start at just £899 with a Shimano Sora groupset, and there are Tiagra, 105 and Ultegra build options as well. We’ve already told you about the new TeamMachine ALR01 that the company launched some time ago. It’s the first time the Swiss company has offered a race-ready bike in aluminium, and in doing so it joins similar offerings from Cannondale, Specialized and Trek, as well as a host of smaller UK brands that already offer racy aluminium bikes like Kinesis for example. 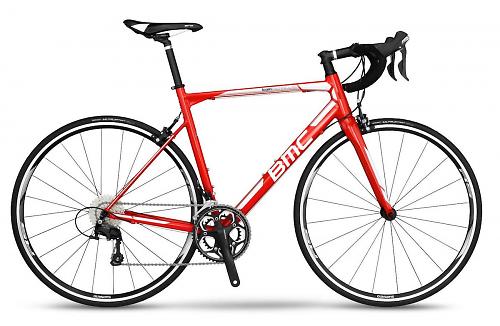 The ALR01 frame shares much of the shaping and tube profiling of the carbon models, and uses the same carbon fibre fork, and at 1,295g it’s a very competitive weight, about the same as the SLR03 in fact. The frame is available with four builds, from Sora to Ultegra.

BMC has added another new aluminium bike to its 2016 range. The new CXA01 follows in the footsteps of last year’s new carbon fibre CX01 ‘cross bike, with hydraulic disc brakes and 46-36t chainsets. BMC is keen to push the versatile of this model, on one hand being an ideal cyclo-cross race bike, but also suitable for the growing gravel and adventure trend. 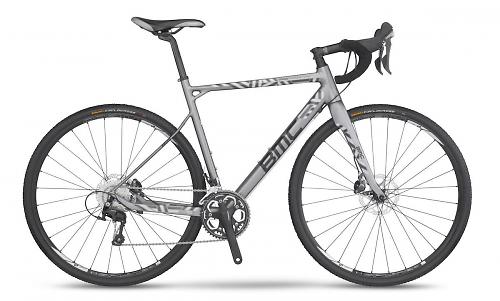 “The CXA01 targets riders who would like an all-round cross bike that can be raced (UCI-approved) but is just as comfortable masquerading as a gravel bike too,” says BMC.