Open Cycles is the bike brand started by Gerard Vroomen who has previous in launching bike brands as he also co-founded Cervélo. Previously only offering a lightweight carbon 29er mountainbike Open has just unveiled the U.P., which stands for Unbeaten Path. Open call the U.P. a ‘GravelPlus’ bike, for when your normal gravel bike just isn’t enough, it’s a performance orientated bike designed for cyclocross, gravel racing and adventure riding, thereby ticking all the current trend boxes. The carbon fibre frame features fittings for disc brakes, has thru-axles front and back, and the U.P. has clearance for tyres all the way up to a mountainbike sized 650b x 2.25. But that doesn’t mean you can’t fit a 28mm road tyre in there should you wish, or a 32mm cyclo-cross tyre. The U.P. is designed with exactly that in mind, with only 6mm difference in the outside radius between a 28mm road tyre and a 650bx2.25 tread Open say you can use either of those or any tyre in between without messing up the bike’s handling. Not many of the tubes get away without any fancy manipulation. The down-tube has flat outside faces where Open have strategically placed strips of ultra-high modulus carbon to keep things stiff, while the seat-tube is ribbed where it emerges from the 386 EVO bottom bracket. The angle of that seat-tube is designed around the use of a straight, zero-setback seatpost rather than a regular layback seatpost which is usually the norm. Open have chosen to do this because zero-setback seatposts are lighter, they’re keen on their weight saving there, and this U.P. tickled the pocket scales at 8.7kg ish, with pedals. Not so shabby for a fat-tyred bike. There’s a tiny little hole at the top of the seat-tube near to the top-tube cluster that Open call the SafePost Pilot hole which indicates the minimum insertion for the seat post. You can chop the post off below that hole to trim even more weight if you want. 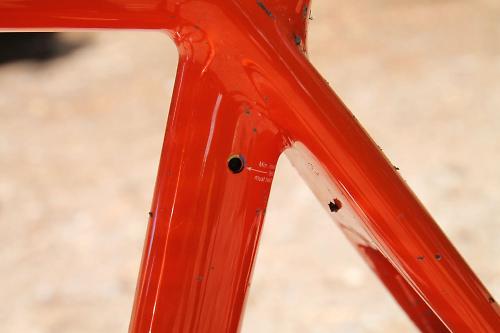 That distinctive drop to the right-hand chainstay is there for a variety of reasons; it moves it out of the crowded bottom bracket area, allowing it to be wider and stiffer, narrower Q-factor road cranks can be fitted and the chainstays can be a short 420mm long whilst still allowing room for a fat MTB tyre. The seatstays are flattened to help with that mythical vertical compliance while retaining lateral stiffness thing. 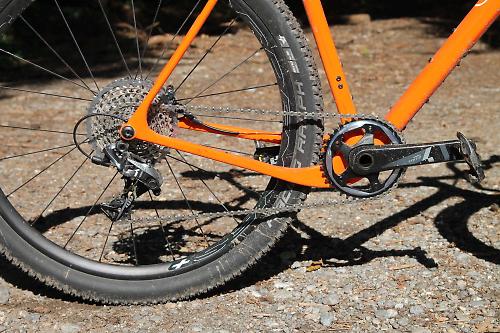 All cables on the U.P. frame run internally and benefit from Open’s MultiStop design, allowing the frame to run 2x10/11, 1x10/11 cables and Di2 wires via a selection of inserts. The front derailleur hanger can also be removed to keep the lines of the frame clean. Mounts come in the form of a pair for bottles and a set on the top-tube for a top mounted bag, essential for snacks on the go when you’re crunching the miles. Although there are no rack or mudguard mounts for that sort of thing, it’s a frame-bag sort of bike I suppose. 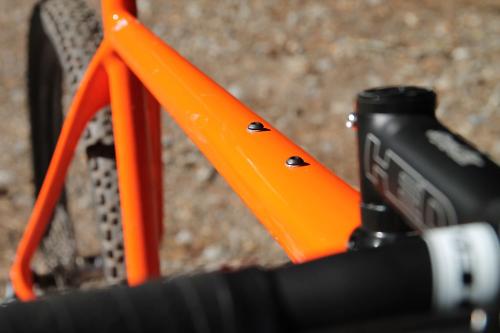 I got hold of the U.P. in its most gnar of incarnations with a pair of 650b x 2.1 Schwalbe Racing Ralph mountainbike tyres fitted to it, and while clearance up front was fine room in the back would mean this kind of set up would be good for dry and dusty days only. Anything wetter or muddier would give you a chance to try out any of the skinnier tyre and more frame clearance options available to you though. 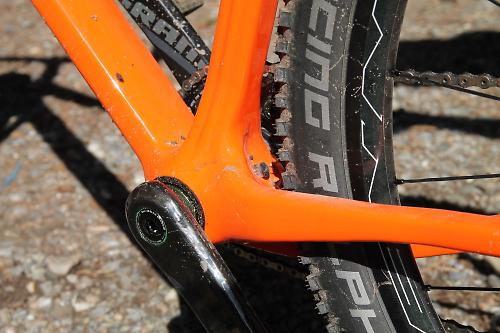 SRAM Force 1xLots provided the gears, HED the wheels with their Ardennes and an Enve and Fizik finishing kit did the rest, a posh bike deserves a posh build. In this guise it’s a proper genre fuzzying bike; is it a fat-tyred cyclo-cross bike, is it a drop-barred moutainbike, is it simply just one interpretation of the new style of adventure bikes? None of that really matters. It’s how you ride it that does.

And how that is, is fast. 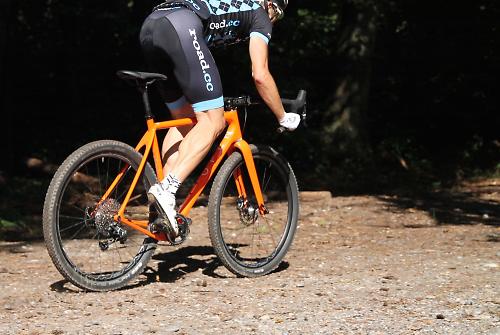 Even with 2.25 tyres on it doesn’t go slow. Whilst you could ride all day on it if you wanted it’s designed more towards the performance end of the spectrum than the steady-away manners that a lot of gravelly bikes seem to exhibit. The U.P. was happy to respond to any kind of pedaling input and didn’t ever seem to want to ease off, happily chasing down deep-section rimmed road bikes that happened to enter into its airspace on the Demo Day, I can only imagine how much nippier and more fun it would be with a 32mm CX tyre on or 28mm road rubber. If you wanted just a quick blat around the woods or a quick way to cross a continent the U.P. would be happy to oblige. 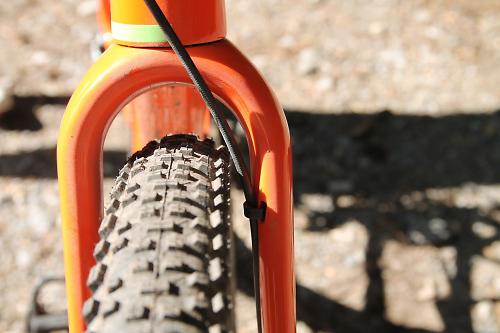 With the chunky tyres on it’s hard to say how much trail chatter the U.P. frame absorbed but it did display a pleasing amount of float over loose gravel and more rocky terrain, and on the MTB pump track of Demo Day it cheekily kept up with full-suspension bikes. 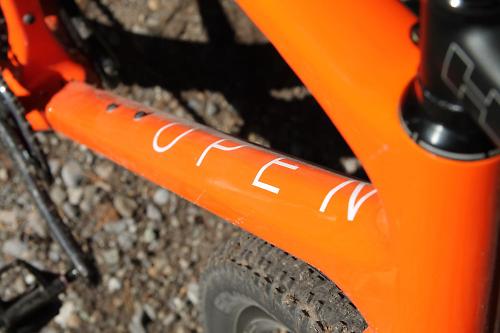 There’s something incredibly satisfying about leaning a fat-tyred drop-barred bike into a corner and knowing that it’s going to stick if you’re used to tip-toeing around the edges of grip that a normal CX tyre reluctantly offers up, and you can do just that on the U.P. In this chunky configuration it’s possible to treat the Open as badly as a mountainbike, as you might expect with those tyres, but it also gives you endless amounts of speed and incredibly nimble handling to boot, just like a CX bike. Swap to one of the newer fatter cyclo-cross tyres, gravel ones if you must, and you’ll have an incredibly capable, fast and light trail munching machine. I might be a little biased as this kind of bike is my favourite sort of machine, all the best bits of a mountainbike with all the best bits of a road or cyclo-cross bike – fast and playful yet whoomphy (yes, that’s a word). With a vast array of wheel and tyre sizes to fit the U.P. can be adapted to suit whatever your kind of tarmac/gravel/trail you might be into. 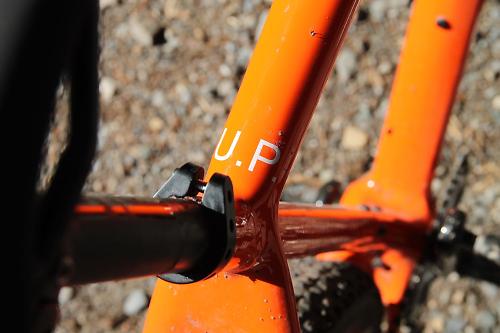 The U.P. will empty your wallet to the tune of $2900 for the frameset, and the build I rode would probably bump that up to an easy $7K. The frame will be available in either this pithy orange or what has possibly been unfairly described as Gillian McKeith brown. That price might seem a little steep for a frameset but with a swap of tyres you’ve got at least three bikes in one, so in real terms, a bargain. Is n – 2 a thing yet, because the U.P. could be it.