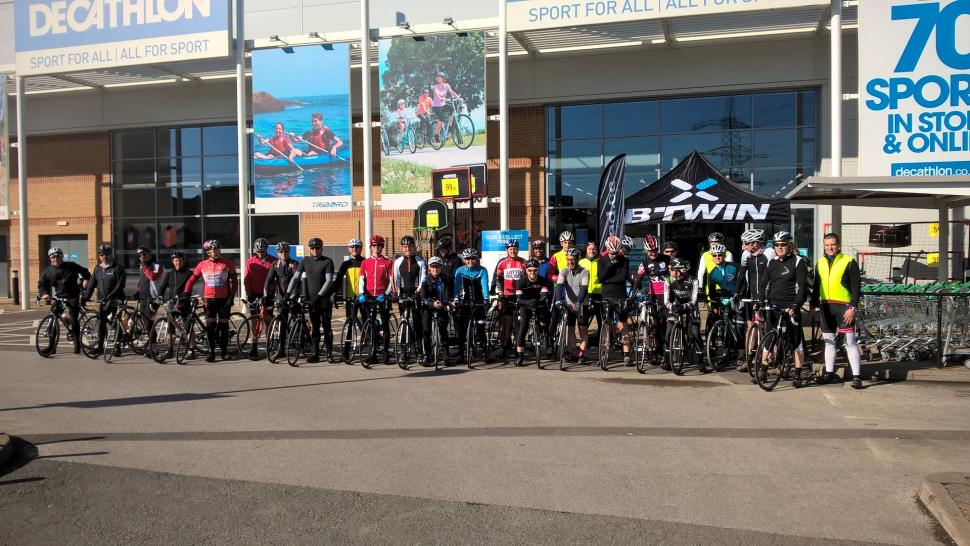 On Sunday 17th April we got up, scraped the ice from the car windscreen and headed cross country to Decathlon's Oxford superstore for the #teamroadcc rideout. Plenty of you turned up for a pootle around the sunny Oxfordshire lanes and even an anti social taxi driver couldn't spoil the mood.

Decathlon have hosted a couple of our road.cc rideouts and this was up there with the most organised and structured so far offering ride leaders and back markers for both routes highlighted by their high-viz gilets. They'd even had 'ride leader' training.

The morning kicked off with the sign on and refreshment table being set up in glorious sunshine as the early frost was soon melted away as just over thirty riders turned up and put their names down for either the shorter twenty-five mile route or the thirty-eight mile version. Everyone's name also went into the hat ready for the Schwagaway lucky dip when the riders returned.

After a quick rider briefing the longer group rolled out with the majority of the riders in tow, just over twenty compared to the single digit cluster tackling the shorter ride.

We were straight into a long steady climb to leave the outskirts of the city before turning off onto quieter roads and take in the countryside views. The group was working well together and with everyone in conversation with the rider next to them the pace was brisk hanging around the 16mph mark.

With a group this large negotiating traffic light junctions and the like became a bit of a task but the Decathlon staff had it covered organising a bit of regrouping whenever necessary.

We arrived at the coffee stop at around mile twenty-five at the Old Court Hotel in Witney where the temperature was now warm enough that we could sit outside in the beer garden to consume coffee and cakes.

With the majority of the hard work down it was a quick blast back to Oxford with the only thorn in the side being Tumbledown Hill which was reasonably steep and a testing length at the end of the ride.

With a regroup at the top we headed back into town via the first hill we'd climbed earlier that morning.

Here Stu Kerton received an impressively close punishment pass from one of the local taxi drivers which after a slight altercation in the middle of the road had seen one rider come down and puncture. We were soon on the move again though.

Rolling into the car park to find the shorter group already back could only mean one thing - Schwagaway time. With each rider called out getting to have a delve in the road.cc goodies box and take home some free kit it was the perfect end to an excellent day. 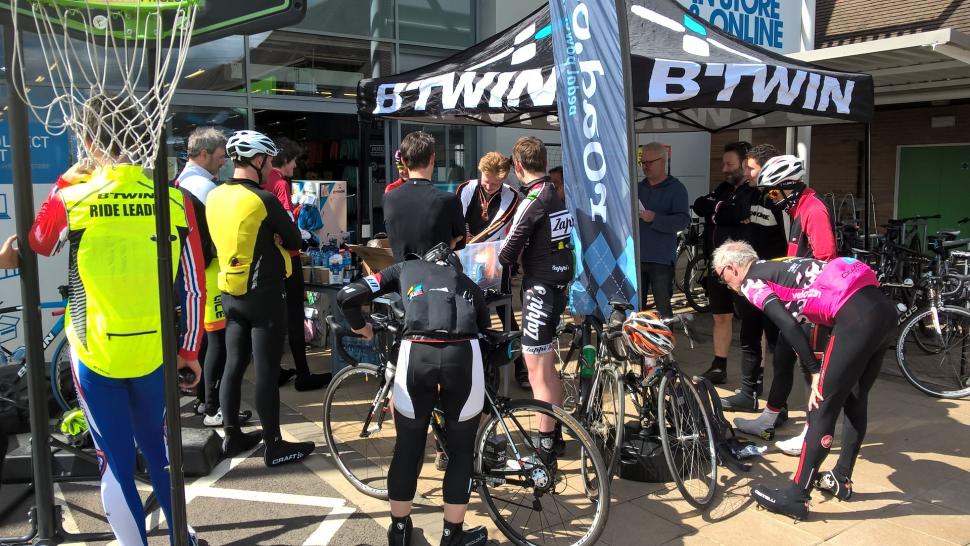 A massive thanks to Decathlon Oxford for organising the ride and laying on the hospitality plus an even bigger thanks to all of you that turned up to ride.

We'll see you at the next one.