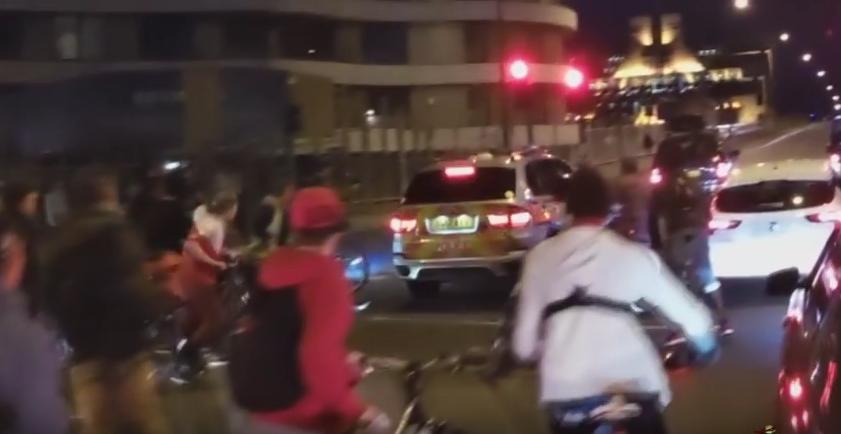 A video shows the moment a police car collided with a cyclist in central London, destroying his bike and driving off during a protest ride on Friday night.

The BMW X5 driven by officers hits the cyclist, dragging another rider’s bike under the wheels, before speeding away in a move Scotland Yard said was defensive.

The incident happened on the corner of Vauxhall Bridge Road and Millbank at around 9pm during a regular Critical Mass protest ride about infrastructure and cyclist safety in the capital.

Police say they were “targeted by demonstrators” and riding over the bike was the only way to avoid a ‘deliberate obstruction’.

IT consultant John, 25, who did not want to give his last name, told the Evening Standard: “I can imagine the police line is that they felt threatened, but frankly they’re armed police officers – do a bunch of cyclists pose a threat to them?

“Was it necessary to run over this kid’s bike? The police were trying to push people out of their way with the car.

“I think it’s entirely fair to call it a hit and run. The police were involved in an accident, they completely crushed a bike, and then they ran away.”

The witness said it was not the only example of police brutality at the event, with an earlier incident in which a man was ‘wrestled’ off his moving bike and dragged across the road.

A spokesman for the Metropolitan Police said: “At approximately 9.10pm on April 29, police became aware of a demonstration involving a number of cyclists at Vauxhall Bridge.

“During this a police vehicle was targeted by demonstrators. As it tried to drive away, the vehicle ran over a cycle that was left in the road as an obstruction.

“No one was injured.”

Back in 2013 we reported how a series of hit and run incidents was reported by cyclists attending a Critical Mass ride in London.

Road.cc was made aware of a number of eyewitness accounts and videos of disturbing events including at least one female rider ‘run over like a speed bump’.

The cameraman wrote on YouTube: “Unfortunately my video doesn't capture what happened just before. But from what I saw and what I pieced together, the driver of this BMW pushed forwards into someone holding traffic at the junction in the background, they went over onto the hood of the car, their bike went under the wheels.
“He seemed to walk away from that without being hurt. Car then accelerated through and was aggressively weaving though and past other cyclists and then that's when the video picks up. He clips the cyclist next to me, who then falls backwards onto me. “The details then get sketchy here, but another silver car (astra maybe?) also accelerates across the junction further up the road and literally runs over a female cyclist, she was then taken to hospital to check her over.

"It looked like the car had driven over her leg. “Then while everyone is recovering from this and we're talking to the Police a 243 bus then knocks another cyclist over. No details on that one though.”