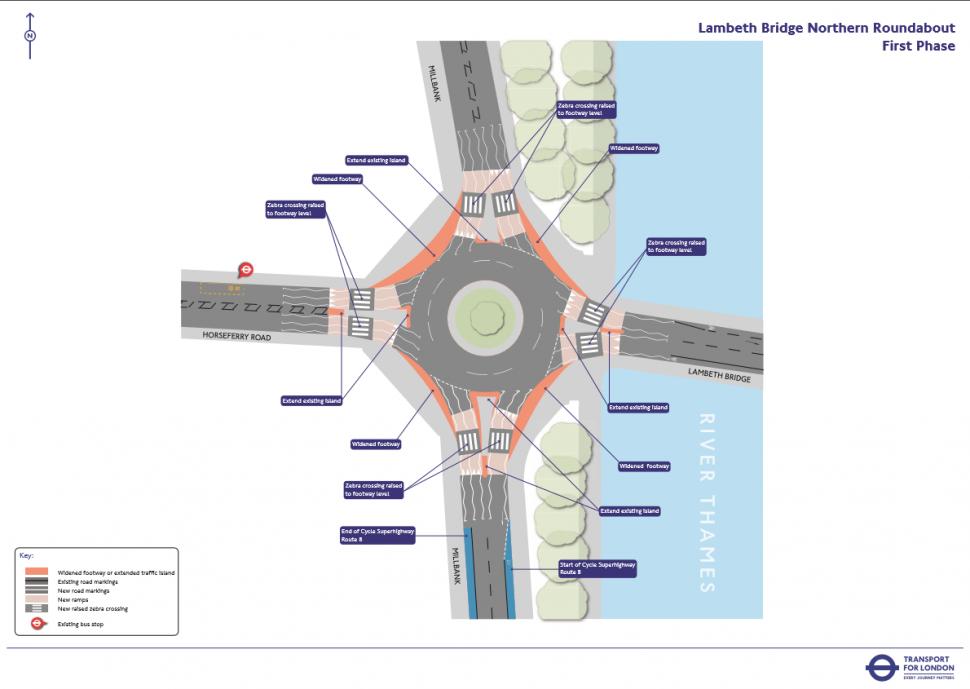 Transport for London (TfL) faces criticism for reviving plans for a junction where a cyclist died last year, which were formerly rejected over concerns they increased conflict between cyclists and motor traffic.

Interim proposals to narrow motor traffic lanes on the Lambeth North roundabout, which links two Cycle Superhighways (CSE-W and CS8), are a short-term measure, with the aim of slowing motor traffic down. However, London’s former Cycling Commissioner, Andrew Gilligan, says it would be better to do nothing as narrow lanes will force cyclists into the path of motor traffic.

In April 2015 Moira Gemmill died cycling at the roundabout, after which Westminster City Council came under pressure from walking and cycling charities to improve safety at the junction, which is under its control. TfL says it will investigate long-term improvements which would “substantially change” the junction.

“They are making it worse,” Gilligan told road.cc. “It will be far better to do nothing than to do this. They are narrowing the road and will force cyclists into the path of traffic.”

Construction will start in January to widen pavements and traffic islands, and raise zebra crossings to footway height, with the aim of reducing traffic speeds and providing more space for pedestrians. The designs will also, TfL says, “provide narrower, better-defined lanes to discourage motorists from weaving in or between lanes on the roundabout”.

However, Andrew Gilligan says better designs exist for this junction. He told road.cc those proposed are the same plans he rejected in 2013, with the exception cyclists will not be permitted to use zebra crossings at the roundabout arms.

TfL & @CityWestminster have been bickering over this roundabout for 5 yrs. Temporary solution = make it even worse https://t.co/W2zmVmj7nw pic.twitter.com/KKerNDwfbv

Sadiq Khan "to double" amount spent on cycling in London

“What this is, it is the same old rubbish creeping in from the back of the cupboard, clanging its chains. When I joined in 2013 the TfL cupboard was crammed with stuff like this - pointless or dangerous little schemes, fiddly schemes - they would widen a kerb here, they would put a titchy bit of protection there.”

Plans were also once drawn up for a “Dutch style” roundabout at this junction, but later rejected.

“We intend to hold a public consultation when feasible schemes are identified. The current short-term improvements are designed to improve safety at the roundabout independently of any longer term scheme.”

TfL were contacted for comment on concerns over the plans.