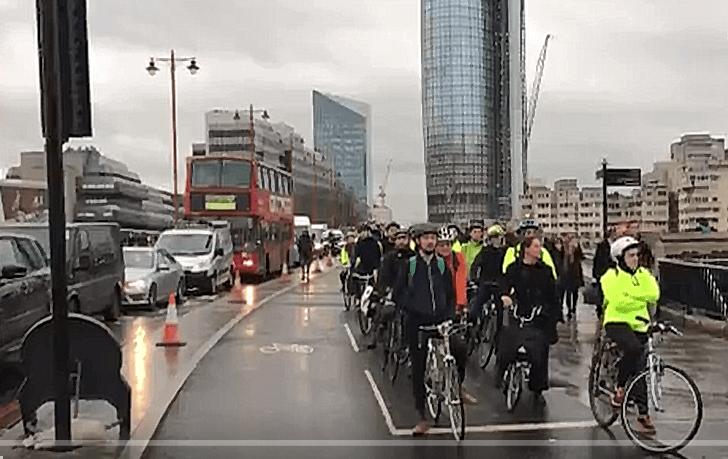 Video: London cyclists beat the Tube strike, but how many are there? Tell us and you could win a T-shirt!

London commuters today have been trying to beat the Tube strike - and many have got in the saddle to do so, which we think is awesome.

And that got us thinking when we saw this video posted to Twitter earlier today of this morning's rush hour at Blackfriars Bridge by Chris Kenyon.

@nuttyxander The collective noun for commuting Londoners is now a 'bridge' load. pic.twitter.com/2JxThpENvb

When the separated cycle lane across the bridge opened last year as part of the North-South Cycle Superhighway, it quickly proved the maxim, "Build it and they will come."

People on bikes already make up most of the traffic at the bridge in rush hour, but this morning was something else altogether.

So, there is a road.cc Cyclists Stay Awesome t-shirt on offer to the FIRST person to agree with us, in the comments below, how many cyclists are in the video, riding northbound (so in the opposite direction to the camera).

We are EXCLUDING from the count the guy on a push-scooter around halfway through, as well as the two riders in green and yellow hi-viz who, when the footage finishes, haven't passed the camera.

We are also EXCLUDING anyone cycling against the main flow.

Standard road.cc Schwag Grab rules apply, and our count of how many cyclists there are riding northbound is final.