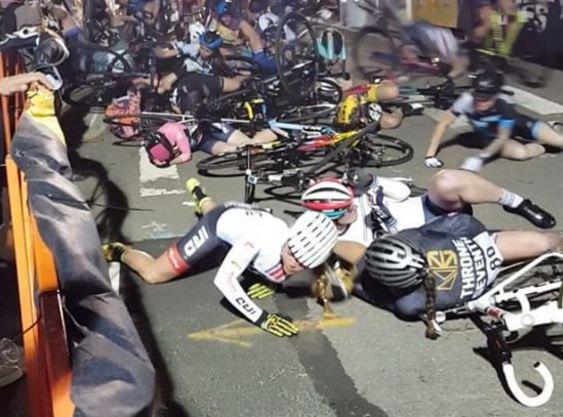 Last year, a crash in the men's race made the headlines - this time it was the women's turn...
by Simon_MacMichael

Last weekend saw the 10th edition of the Red Hook Criterium in Brooklyn, New York City – and as in previous years, it’s another big crash that has made the headlines.

In last year’s race on the site of a former cruise terminal in the New York borough it was a stalled motorbike on the men’s event that resulted in a crash that brought down dozens of riders, this time round the incident happened during the women’s race.

Wreck at the beginning of the women's finale at the #redhookcrit hope everyone is ok #cycling #brooklyn #rhcbk10 #fixedgear #fixie #fixiecrash #redhook #crash #bikelife #bike To use this video in a commercial player or in broadcasts, please email licensing [at] storyful.com

The crash happened early on in the fixed gear crit, which was won by Colleen Gulick of Deluxe Cycles.

As this New York Times article explains, the event has moved well beyond its informal roots a decade ago when just 15 riders took part in a race organised by David August Trimble, who still runs it today but no longer races.

With a commercial sponsor in the shape of video games maker Rockstar Games coming on board in 2013, the organisation has become slicker and the event has continued its international expansion – on 22 July, London will host a Red Hook Crit for the third time, with races already held in Milan and Barcelona.

Since 2015, British cycling consultant Liam Worthy has been brought on board as circuit manager, with his duties including trying to ensure the safety of riders – although as seen in the last two editions, crashes will be inevitable and, when they happen, can involve dozens of riders.

Here he is talking last year about his role.