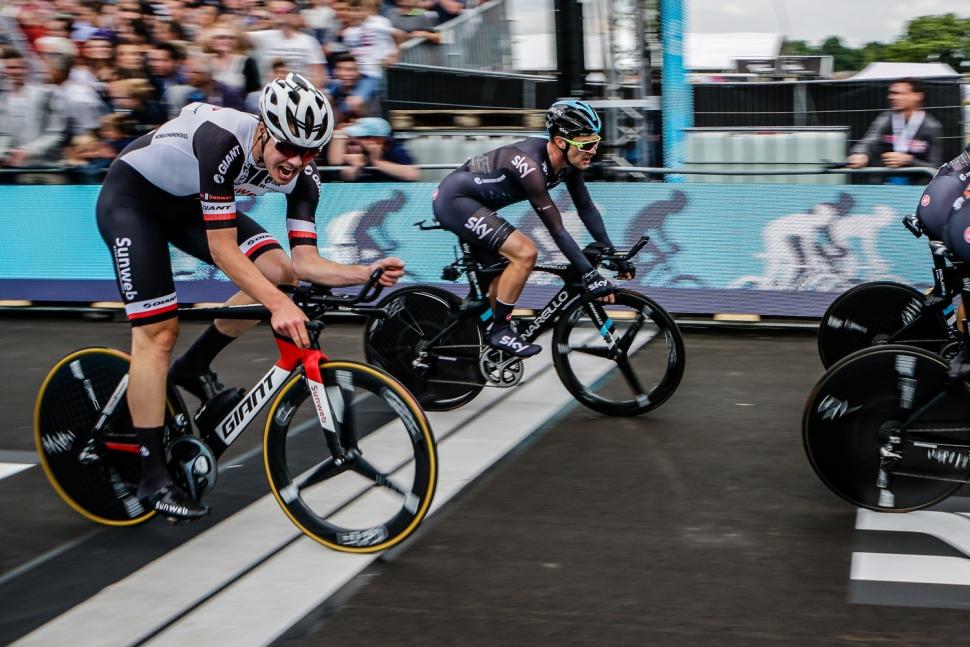 Team Sky have won the inaugural Hammer Series in the Dutch province of Limburg, holding off the challenge of Team Sunweb to take victory by just one second in the event staged by Velon, the joint venture comprising a number of UCI WorldTour teams.

The results of the first two days of competition – Friday’s Hammer Climb and Saturday’s Hammer Sprint – determined the order the teams, each comprising five riders from a squad of eight, would set off in.

The 16 teams, 12 from the UCI WorldTour and four with Professional Continental status, were split into two pools depending on their performance on the preceding two days, with only the eight in the second pool able to contest the win.

The points amassed by Team Sky’s riders on the first two days meant they led the second group off first on the course, comprising three laps of a 14.9-kilometre circuit, with a 32-second head start over Sunweb.

Both teams had lost one rider when Sunweb caught and passed Team Sky with just 3.5 kilometres remaining, but the leaders responded through a late attack from Danny van Poppel entering the finishing straight.

With two team mates on his wheel, and the fourth rider’s position determining the team’s result, it was down to Tao Geoghegan Hart to hold off the Sunweb charge – and while Max Walscheid crossed the line ahead of him, the British rider managed to keep the other three at bay.

This was some finish!!! An epic finale to #HammerSeries. Elia, Doull, DVP and Tao won the sprint. Well done boys pic.twitter.com/EEBiwFwQcJ

Afterwards, van Poppel said: “I had to bring them to the last corner in front and it was really close. If I didn’t do that, we didn’t win.”

Team Sky sports director Servais Knaven added: “Danny did a great last job into the last corner, and then it was a bit of a battle that I saw with Tao … it was almost like a bunch sprint on time trial bikes.”

While it is clear there are some teething problems with the format, as would be expected with any new event, the general reception over the three days as a whole was positive from riders, teams and fans alike – with 1.5 million people watching it online or through the Velon app.

1
Decathlon launch three new Van Rysel EDR carbon road bikes with disc brakes
2
UPDATED: Near Miss of the Day 464: Police finally take action against a driver who refused to give his identity after a punishment pass
3
Cyclist on motorway pedals past sign warning of … cyclist on motorway
4
Near Miss of the Day 551: Close pass leaves cyclist in shock – driver then offers to donate to charity to stop case going to court
5
Emergency vehicle causes crash in peloton
6
Festka marks 10th anniversary with ultra-cool limited edition bikes
7
Phil Liggett believes Lance Armstrong would have won the Tour without drugs
8
Video: Right-turning van driver crashes into cyclist – but escapes prosecution