Mark Cavendish won Stage 5 of the Tour of California in a replay of Stage 4's battle with Tom Boonen – except this time the outcome was more emphatically in the Briton's favour as he won by a bike length rather than a couple of inches. To tell it like it was Cavendish simply outclassed the Belgian superstar.

Stage 5 from Visalia to Paso Robles was long (216Km, 134 miles) and flat and definitely earmarked as one for the sprinters, as per the ToC 2009 script there was an early break today's was a bit bigger than usual with six riders escaping the main field about an hour into the stage.

The break consisted of Pieter Weening (Rabobank), Gunn (Fly V Australia), Cameron Evans (OUCH), Mattthew Crane (Jelly Belly), Jeff Louder (BMC) and Glen Chadwick (Rock Racing) at one point they had more then 8 minutes on the main field – enough to make Weening the race leader on the road, that in turn was enough to get Astana to up the tempo in an effort to chase them down. They were duly joined by all the teams with hopes of bagging a sprint win with Quickstep, Cervelo Test Team, and Columbia High Road being particulary conspicuous in their efforts for Tom Boonen, Thor Hushovd and Mark Cavendish respectively. 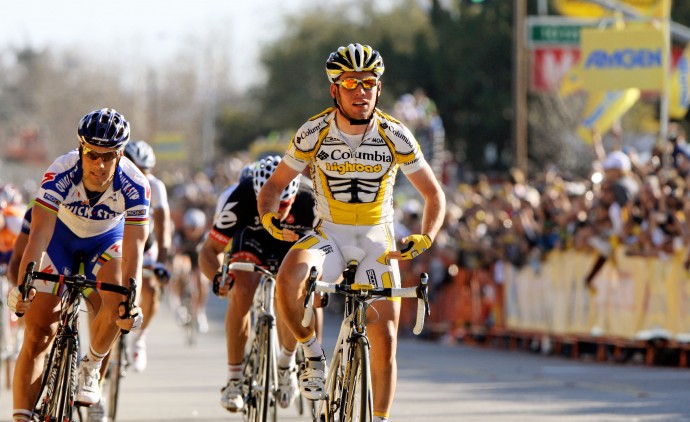 The effort of staying out on their own for so long took its toll on the break which started to come apart 25km out from the finish when Louder and Gunn were dropped – at this point the gaps was below 3 minutes. Although the two dropped riders tried to get back on they were swept up as the gap to the lead group came down rapidly – the four remaining riders in the break were eventually caught with 4km to go.

Less than a kilometre later Floyd Landis (Ouch) and Jens Voight (Saxo Bank) broke for the line but the sprinters were not to be denied and the pair were caught with just over a kilometre to go. A big right turn into the final straight and it seemed that the sprint would be between Cavendish and Hushovd as Cervelo and Columbia hit the front with their respective trains, when the hammer fell it was actually Boonen and Cavendish. The Brit did the business and this time he he didn't celebrate too early.

So Cavendish bagged another stage and Leipheimer retained his lead in the overall after a day glued to the wheel of super-domestique, Lance Armstrong, although it is starting to look a tad congested at the top of the leaderboard with 53 seconds separating Leipheimer and the rider in 16th place. MInd you, there is a time trial to come and Armstrong said after today's stage that Leipheimer would put a minute into him.