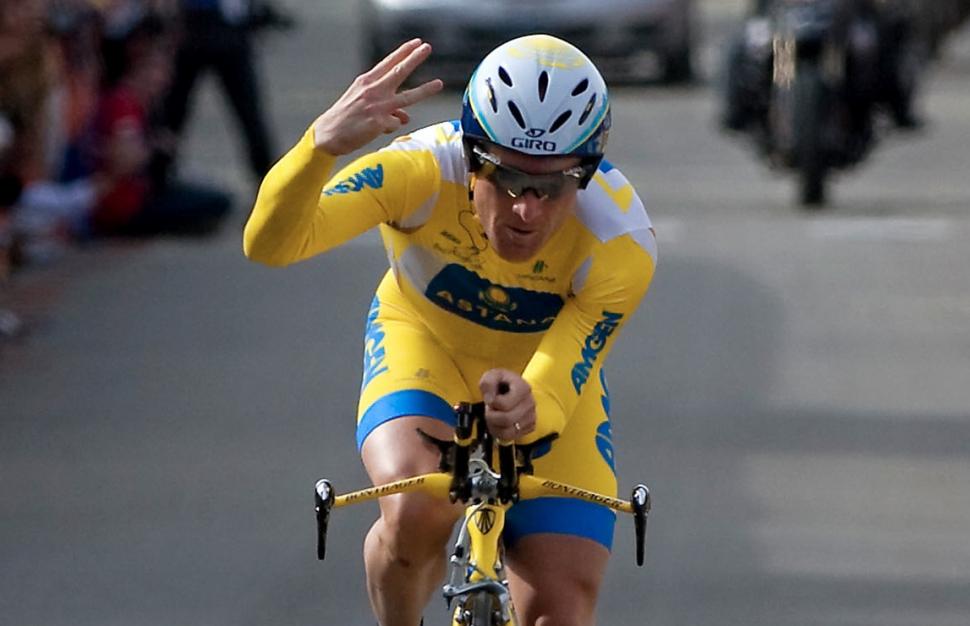 ToC Stage 8: The day belongs to Frank Schleck but the race is Leipheimers… again

Everything was still in play at the start of today's stage with all the main jerseys: general classification, king of the mountains, and sprint all up for grabs, and this stage had something for everyone – it was long enough (96.8 miles) so plenty of attacking opportunities, and it was far from flat – in fact it went over the highest point in the race's history, the hors category Palomar Mountain, which takes 11.7 miles, and 21 hairpins to climb to 5,123ft. 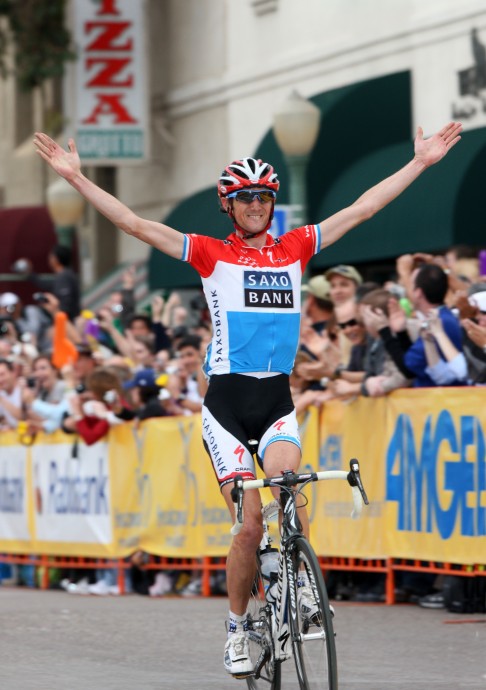 Early on it seemed like the Astana team were out of gas and by the climb of Palomar mountain Leipheimer was out on his own separated from the rest of the Astana riders. However, rumours of their demise prove unfounded and before the chasers reached the top they are back supporting their man.

The Palomar at a little after the mid-point of the stage is proves to be the pivotal point of the race up until this point a nine man break has been off the front for around 20 miles, although it hasn't always been the same nine men – although it has always seemed to contain one or other of the Schleck brothers with the early running being done by Andy at one point Mark Cavendish figured though he paid for it later when he struggled to keep contact with the peloton (he finished safely to win the sprint competition). Astana regrouped climbing the Palomar and their relentless pace takes its toll on the breakaway riders.

When the break goes over the top at Palomar the gap is down to 50 seconds. The nine man break is still ahead, even though it hasn't stayed the same nine men and has itself seen an attack off the front from Franck Schleck of Saxobank who opens up a gap on the descent which is treacherous in places from meltwater washing out over the road – Schleck wears his race number (13) upside down to reverse the luck. The rest of the break take things more carefully on the way down.

The one man break quickly becomes four: Glen Chadwick (RRC), Vincenzo Nibali (LIQ), Frank Schleck (SAX) and Bauke Mollema (RAB) are the break. They briefly stretch their lead to over a minute before Astana, lead by Lance Armstrong, cranks up the tempo of the chasing pack as their lead dwindles, Chadwick took his chance to jump away and descend the penultimate lump of the race solo – he quickly built a 1:10sec lead on the chasing peloton and 12 sec ahead of the rest of the break, but he's not on his own for long as on the run in to the final climb the three chasers catch him. Then Schleck and Niballi attack while Chadwick is absorbed by the chasing pack which climbs the Cole Grade climb at a fierce pace set by Astana and Armstrong in particular in a succesful attempt to pre-empt any attacks by Columbia Highroad and Garmin Slipstream for Zabriskie and Rogers – the strategy works.

Highroad and Slipstream do eventually take on the chase themselves but they've run out of road and with the race well inside the last 10Km this is more about setting up their sprinters rather than unseating Leipheimer from the top of the GC. For the final gallop in a group of 31 riders containing all the main players and their support riders attempted to chase down Schleck and Nibali who with 3Km to go were still 50 seconds to the good. With every turn of the pedals it becomes clear they are not going to be caught.

On the final turn Nibali has the advantage, but Schleck has saved something for one last burst and he takes the stage for Saxo Bank – he deserves it for his fearless descent of Palomar Mountain and his constant attacking. Less than a minute later George Hincapie (THR) beats Rory Sutherland (Ouch) to fourth place.

However the day, and the week belongs to Levi Leipheimer who delivers the Tour of California 'threepeat' so many had expected with a masterful display of riding from himself and his team – notably that man Armstrong.