Feeder rides will converge on city centre on 8 June, with afterparty following at London Bridge
by Simon_MacMichael

Full details have been announced of next month's annual World Naked Bike Ride in London, which this year takes place on Saturday 8 June - coinciding with the Queen's official birthday.

With more than 1,000 riders expected, resulting in a peloton that can extend 4 kilometres when stretched out, the ride aims to “Protest against the global dependency on oil, curb car culture, obtain real rights for cyclists, demonstrate the vulnerability of cyclists on city streets and celebrate body freedom.”

As in previous years, there will be several feeder rides to the start point from locations around the capital, which organisers say will enable the message to be spread across 65 kilometres of roads in the capital. Those are: 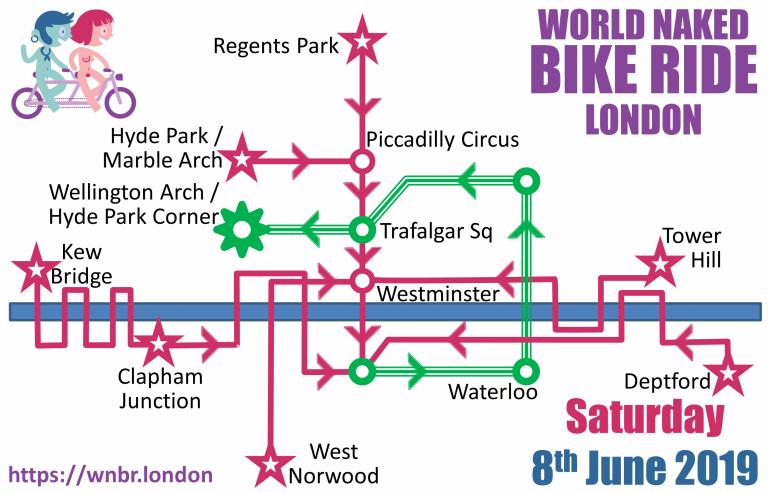 The free-to-participate ride is cleared in advance with the police, and under the Sexual Offences Act 2003, in England public nudity is not against the law unless it is done with the intention to cause someone alarm or distress.

Organisers say: “We believe that some visibility of non-sexual nudity of diverse ordinary people is a good antidote to the highly distorted view that young people can develop about body image, normal human bodies, adult behaviours and loving relationships.”

Founded in 2004, more than 120 cities around the world now hold annual rides, with 15 expected in the UK this year including in Cambridge and Folkestone.

There will be an afterparty starting at 6pm at a location close to London Bridge, with details of exactly where to be finalised once numbers are known. Tickets can be booked here via Eventbrite.