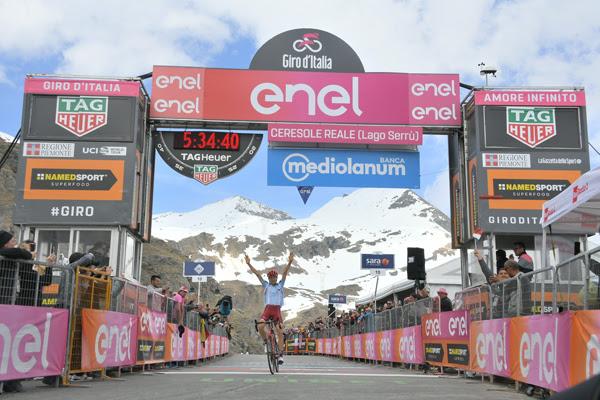 First summit finish of this year's race sees big changes in the overall standings, Polanc remains in pink...
by Simon_MacMichael

Ilnur Zakarin of Katusha-Alpecin has won the first summit finish of this year’s Giro d’Italia at Cerosole Reale, with Jan Polanc of UAE Team Emirates keeping the race leader’s maglia rosa following the 196-kilometre Stage 13 from Pinerolo. Simon Yates of Mitchelton-Scott was dropped on the final climb and lost time, while Team Ineos rider Tao Geoghegan Hart crashed out.

An attack by Mikel Landa of Movistar 15 kilometres out put several riders in trouble, most notably Simon Yates of Mitchelton-Scott.

Also losing time was Astana’s Miguel Angel Lopez, whose team had ridden hard on the second of today’s climbs to split up the group containing the overall contenders, dropping race leader Polanc, who had started the day with an advantage of 4 minutes 7 seconds over second-placed Primoz Roglic of Jumbo-Visma.

Lopez had a mechanical problem with around 12 kilometres remaining which a neutral service mechanic seemed unable to fix, and was only able to resume racing when he received a new bike from his team car.

With three big climbs on the menu today, it was a fast start to the stage, with a number of unsuccessful attempts to get off the front of the race before a 25-strong breakaway got clear ahead of the first climb.

There was plenty of quality in the group, including several riders sent up the road to be able to assist their team leaders later on, including Mitchelton-Scott’s Mikel Nieve and the Bahrain-Merida pair of Antonio Nibali and Domenico Pozzovivo.

There were others with overall ambitions of their own, including Bauke Mollema of Trek Ssegafredo and Zakarin, looking to move up the standings.

Nieve, Zakarin and Mollema were the final three out in front, with a fresh attack by Landa seeing the Spaniard quickly gain ground on them.

Zakarin responded to that threat by attacking his two breakaway companions with 5 kilometres remaining as they headed up above the snow line towards Ceresole Reale, hosting a Giro d’Italia stage finish for the first time, the Russian riding away to take his second career stage win at the race.

Also in the break today was Geoghegan Hart but the Team Ineos rider was forced to abandon the race after crashing following the first climb.

To round off a bad day for British riders and a memorable one for Russia, Hugh Carthy of EF Education First lost the best young rider's jersey to Pavel Sivakov of Team Ineos.

“I didn’t have any plan for winning this stage. I went in the breakaway with the aim of making up some time on GC. This win is a little bit of a surprise for me. I just rode the last climb with all the energy and the power I had. I’m happy with what I’ve achieved today. Roglic is really strong. He’s the number one favourite but I’ll try to take the Maglia Rosa in the coming stages.”

“I knew I wouldn’t have been able to follow the top riders till the end. I expected a hard stage today but maybe not as hard as it’s been. I’m happy that I managed to retain the lead for at least one more day. I won’t keep it till Verona anyway, so I take it day by day and I’m aware that there’s no flat at all tomorrow.”

1
Daily exercise rules: current cycling dos and don'ts
2
Warning that cycling could be banned if people don’t ride responsibly this weekend
3
How much distance should you leave to the cyclist ahead in a time of pandemic?
4
“Absolutely amazing” say campaigners as Government quietly announces it will prioritise a shift away from cars
5
“Best to avoid cycling in case you fall off” says director of motoring group
6
Cyclist deliberately doored by hit-and-run Audi TT driver
7
Win Shimano cycling kit and RC5 shoes worth over £500!
8
Not-so-Near Miss of the Day 391:Cyclist knocked off bike - but police unable to idenify hit-and-run driver