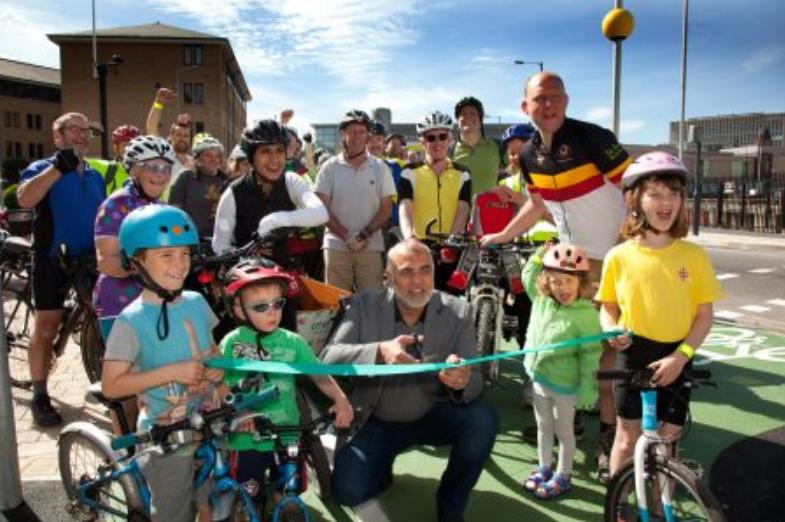 A Bradford councillor who opened a new, off-road cycleway in the West Yorkshire city has said he is “disappointed” that some cyclists were seen riding two abreast in the road during yesterday’s official unveiling of the route – with his criticism of the riders, who were doing nothing wrong, overshadowing the local newspaper’s coverage of the launch of the Canal Road Cycleway.

A photo gallery accompanying the Telegraph & Argus’s article on the ceremony shows it was well-attended by cyclists of all shapes, sizes and ages, with people on upright bikes, road bikes, cargo bikes and even unicycles, and with plenty of children also enjoying riding the route in the late May sunshine.

But the first picture is of two cyclists riding alongside each on the main carriageway, suggesting they “shunned” the new route, which helps link Bradford with Shipley, something also emphasised in the gallery’s title, “Photos from cycle route opening, but some riders chose to ignore the lanes.”

Councillor Taj Salam, who cut the ribbon to open the new route and is Bradford council's cycling champion, said: “I am disappointed to think there are irresponsible riders out there who want to ignore the new route and carry on cycling in the road.

“We are delighted with the route. It provides a safe environment for cyclists as well as making the route safer for other road users as they are not having to negotiate them on the road so it is sad to hear people are choosing to ignore it.”

His comments reflect something we regularly highlight here on road.cc – the misconception that people on bikes are obliged to use specific cycling infrastructure where it exists, and that it is “irresponsible” when they choose not to.

The Highway Code makes clear that use of on-road cycle lanes and off-road cycle tracks is not compulsory, and that it is not illegal for people to ride two abreast on the main carriageway.

Indeed, though for faster, more confident cyclists, the road may well be the more suitable place to ride – and criticising people for choosing to do just that can help reinforce prejudice against cyclists, as well as misconceptions about the law.

Thanks to everyone who came along to our community celebration today to mark the official opening of #Bradford ’s new £3.1m Canal Road Cycleway, linking #Shipley and the city centre@CyclingCapital @bradfordmdc @SustransYorks https://t.co/AN6YAObkpM pic.twitter.com/RT9dVepPj2

“We know encouraging more of us to travel by bike or on foot not only boosts people’s health and saves individual’s money, it also brings wider environmental and economic benefits, which is why we want to make cycling and walking a natural choice for short, everyday journeys.”