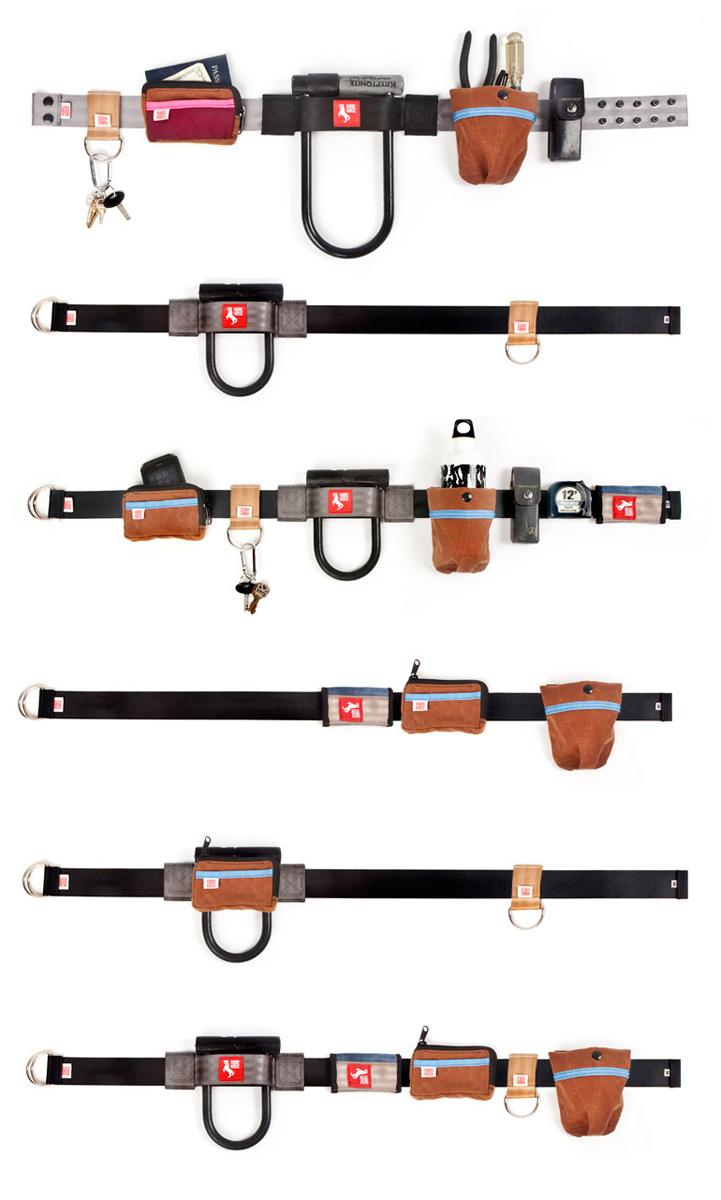 Superhero-style system for stashing your stuff
by nick_rearden

The little Pennsylvania company whose oh-so-simple lock holster we reviewed back in 2009 has expanded its range to the extent that you can now custom-design your own belt mounted carrying system.

It's still not going to particularly suit the Lycra-clad classes; our review of the Fabric Horse Lock Holder said, "The coolest way to carry a D lock. Mind numbingly simple. Doesn't work if you are wearing Lycra." Although that was when the holster was necessarily fitted on your own trouser belt and there aren't too many of them worn with Shutt VR shorts.

The new optional wide webbing belt made from scrapped car seat belts could at a pinch be worn with sporty outfits, but it's still the burgeoning population of cyclists wearing street clothes that we foresee liking the look of this modular system and if they grew up watching Batman, so much the better.

Of course, there's no reason why the accessories cannot be attached to a belt you already own but the Fabric Horse webbing belt in grey or black costs $20 and then you can choose, among other things, a zipped phone pouch for $30, an open pocket that a bottle fits into beautifully for $20 and a key ring for $5 as well as the aforementioned lock holster which still costs $10 in the USA and which you can still buy sized to suit your favourite lock. There's a rainbow of colours to choose.

Little Yellow Bag: an $80 new addition that isn't in production yet but coming soon.

The company was founded in 2003 in Cincinnati by Carrie Collins but is now based in Philadelphia. "We use recycled materials harvested from thrift stores and junkyards whenever possible, together with the cast-off scraps from remnant stores and other textile manufacturers. We frequently combine these alternative sources with new materials to ensure our products’ durability and longevity," says Collins' blurb.

We particularly like the Fabric Horse backpacks which utilise not just recycled seatbelt webbing but the snap-together clasp mechanism as well although the site bemoans the shortage of the clasps at junkyards now that folks are appreciating 'vintage' cars again.

Urban Hunter and some London retailers have the belts and lock holsters; meanwhile all the components can be ordered from Philadelphia.