Hey, we told you so. Back when we were speculating on the sneak peek shots of Trek's new Domane underneath Fabian Cancellara at the Strade Bianche, we conjectured (is that a word?) that the seatpost and the main frame were separate. And they are. Spartacus himself has been heavily involved with the design process, and the bike "specifically addresses the challenges of rough road conditions found throughout the spring classics courses with a collection of key innovations unlike any available before today", according to Trek.

The Domane (That's Do-MAH-nee, apparently, which is latin for "King's crown" as well as being an anagram of Madone) features a technology which Trek have christened IsoSpeed. It's a "functional decoupler that separates the ride-tuned seat mast from the top tube". So effectively the the seat tube isn't attached to the top tube and seatstays like you'd normally expect, but instead is held in place by a pivot and some kind of elastomer coupling that acts as a buffer between the seat mast and the top tube. Did we say 'elastomer' at first that what we thought that piece of rubber was - going on fantasise about possbily tuning the ride and such like and fretting about getting it out… turns out it isn't an elastomer. No, Trek tell us, that piece of rubber is… a piece of rubber a simple seal designed to keep the IsoSpeed clean and dry all the action comes courtesy of the carbon layup and the decoupler itself. Shame I'd already worked myself up for the next generation air shock version with a weeny pump the size of an Argos biro, but let's not get ahead of ourselves.

IsoSpeed means lots more compliance, say Trek. Twice the vertical compliance of the nearest competition is their claim. Not only that but they reckon that it's even stiffer laterally than the Madone. A bike that's got a bit more give should be a boon over long rides and difficult surfaces, with the IsoSpeed coupling allowing more fore-aft movement as well as in the vertical plane.

So it moves twice as much vertically as it's nearest competitor and half as much again as the Madone, but just how much is that? Well Trek have provided us with some figures.  According to Trek the current Madone has 23mm of compliance - which to my mind is quite a lot, it's as near as dammit an inch (0.905 of an inch to be exact). The Domane has 35mm of flex at the back end - Trek's distinction in terminology and the distinction is probably easier to grasp (for som of us at least) if you substitute the fancy word compliance for 'give'. Basically the Madone can give up to 23mm at the back whereas the Domane will move up to 35mm - the action of the back end we are supposing being more 'active' although again that's going to be a relative term - we're not talking MTB suspension here. If I've got any of this wrong I'm sure Trek will let us know. Hope so anyway.

When it comes to the front end Trek say there's less of a difference - not surprising perhaps given that there's less of an actual difference between the two frames anyway - Trek haven't supplied us with an actual amount of compliance for the front but they have said that the Domane is 10 per cent more compliant. It'll be interesting to see how the new Madone, when it comes out, shapes up against the Domane in terms of compliance front and rear. 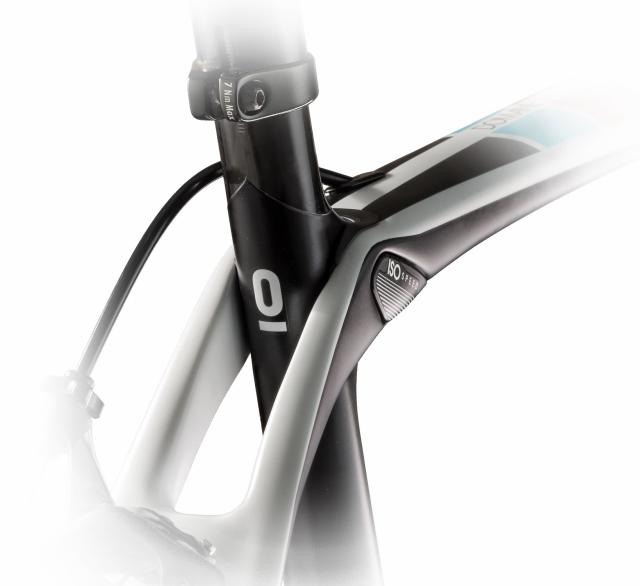 Cancellara's certainly happy with his new bike. “When you work with Trek and the engineers it’s a combination that lets you examine every detail and the details that it takes to win the races that this bike is made for are bigger than any other,” he gushed. “The end result of all that work is the Domane and after competing on this bike, winning on this bike, it’s going to be hard to get me on anything else,” he said, although that didn't stop him swapping back to the Madone for the smooth tarmac of Milan-San Remo. 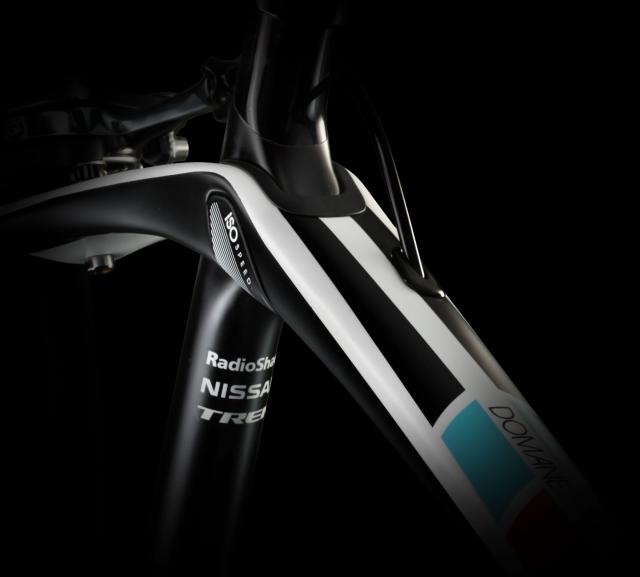 In the end it's a comfort bike. A performance-led one. Trek have always maintained that they didn't need a comfort bike because the Madone was comfy enough and available in different geometries, but they've inevitably lost out in sales against the likes of the Specialized Roubaix, Cannondale Synapse and Giant Defy Advanced, and more and more manufacturers are producing performance-comfort bikes now; BMC's launch of the cobble-friendly GF01 is next week. 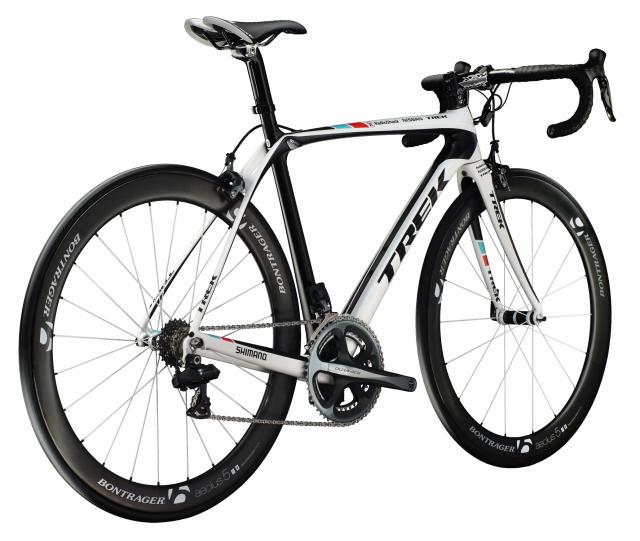 Like the Madone 6 Series the Domane boasts an OCLV carbon frame with a super-wide BB90 bottom bracket and internal cable routing. There's a new Bontrager RXL fork to go with the frame, too. Trek call the cable routing 'race-optimised' and interestingly the cables on the Domane all enter the headtube on the same side (something we noticed when we spotted the bike at the Strade Bianche). We'll be looking to see if that is an innovation that makes it's way on to the next generation of the Madone - surely due for launch any time now.

The Domane's geometry is different from that of the Madone. The head tube is just a little taller than you'll get on an H2 fit Madone - Trek do three different fits, the H1 being the most aggressive, the H3 being the most relaxed. The Domane's head tube is 17.5cm compared to 17cm on an H2 fit Madone. The top tube is slightly shorter too. You get a slacker head tube angle, an increased fork offset, longer chainstays, a longer wheelbase and more of a bottom bracket drop on the Domane too, which should translate into a more planted, stable ride which is especially useful on rough roads where hitting something hard and jagged on a standard road bike can knock you completely off-line.

Cancellara doesn't ride with electronic gears; if he did you'd have seen the battery mounted at the bottom of the down tube, basically in the middle of the bottom bracket. For a bike that's designed to be ridden over the rough stuff that seems like an odd placing to us, being a bit more vulnerable to debris kicking up from the front wheel than the current favourite position of underneath the chainstay.

Other pave-beating touches include super skinny seatstays and an integrated chain catcher; some of the RadioShack Nissan Trek boys would undoubtedly find that useful on the Madone too. Hopefully then the new integrated chain catcher on SRAM Red is detachable - how many chain catchers does a boy really need? Actually, we're guessing that the one on the Damone is detatchable for those who can change gear without dropping the chain.

The new Domane is available right now in two versions (there's three on the UCI list), and in another break from the usual the Custom version is cheaper than the Team Edition. quite a bit cheaper as it turns out. You can have a Custom Domane 6 for a mere £3,700 (although you can pay more if you want) while the Domane 6 Series Team Edition can be yours for £8,290. There must be some Unobtanium knocking about in that one. Well, do you want to beat the cobbles or not?

That's it for now. But if that isn't enough, we've got a man in the area: VecchioJo is currently hot-footing his way across the low countries to ride the Flanders sportive, and he's even now diverting to Kortijk (picture one of those Union Jack arrows from the start of Dad's Army) where Trek are currently showcasing the new machine. He should be able to swing a leg over it too, so stay tuned for a first ride soon… if he doesn't get lost.