We've got some great pictures from the morning of the recent Gent Wevelgem while the riders were still drinking their final espressos and making last minute clothing decisions. Owen Rogers was there for road.cc. 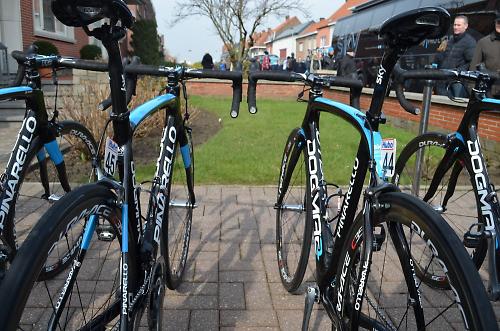 A fleet of Team Sky Pinarellos. There was a mix of models, with some riders opting for the Dogma 65.1 Think 2 that they regularly race, while others, including Ian Stannard, opted for the DogmaK. 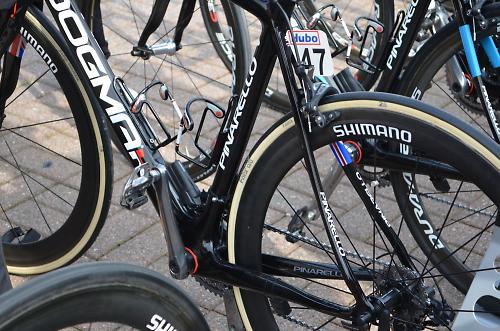 It's the modern incarnation of the Kobh. It has slimmer seat stays and a different fork, longer chainstays and a slacker head angle to help it better deal with rough roads, including cobbles. There’s also more clearance between the tyre and frame. 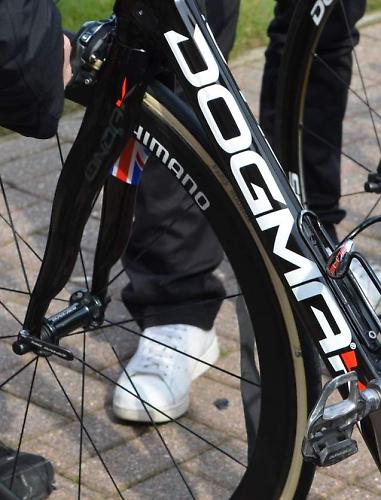 The OndaK fork has more clearance and a different layup to the one found on the Dogma2. Stannard was running Shimano’s Dura-Ace C35 tubulars, FMB’s Paris-Roubaix 25mm tyres, while some were on Veloflex. And notice the British flag decals as well, to mark his national title. 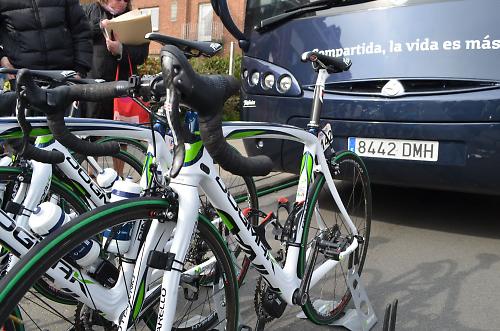 This one belongs to Movistar's Alex Dowsett. He, like most of his team mates, opted for the DogmaK. Dowsett was on Team Sky before switching to Movistar for this season, so he knows Pinarellos well, although Sky run Shimano and Movistar are on Campagnolo. 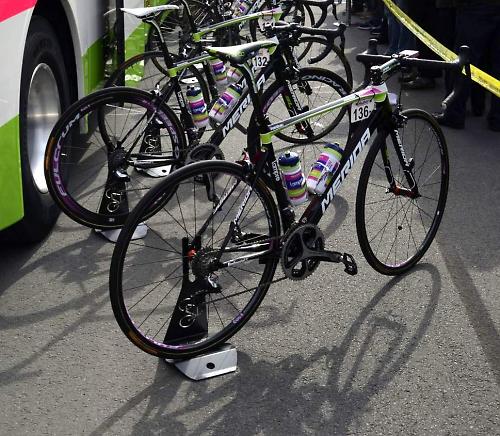 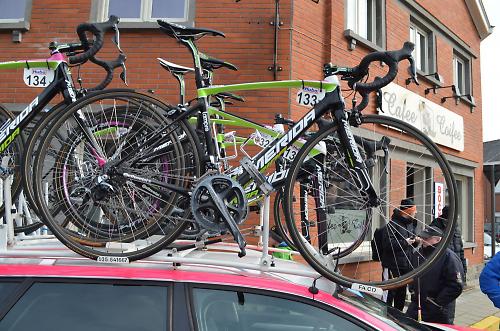 The back of each fork leg, just above the dropouts, has a large cutout section and an elastomer filling the vacant space. This is designed to allow a controlled degree of flex, to reduce the shocks transmitted through to the rider, with the elastomer controlling the rebound. 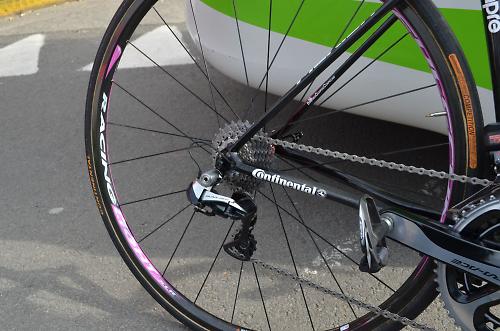 A mixed choice of wheels for the Lampre team. Popular, and for Pippo, was Fulcrum’s Racing Light XLR carbon tubular. 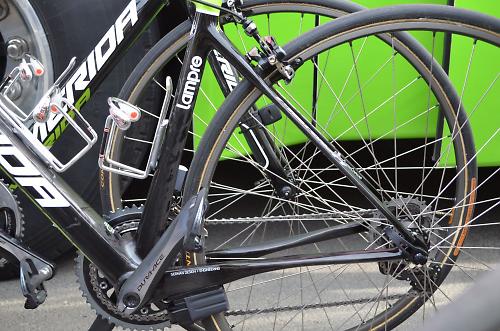 The other near default Classic wheel was evident: Ambrosio rims laced to regular hubs. It's a favourite of both mechanics and riders. This spare Merida Ride team bike shows a mix of Shimano Dura-Ace: the latest Di2 shifters and mechs and older generation cranks. 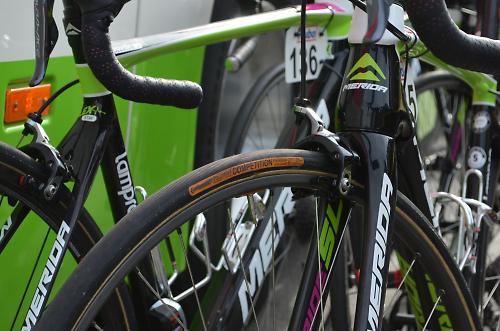 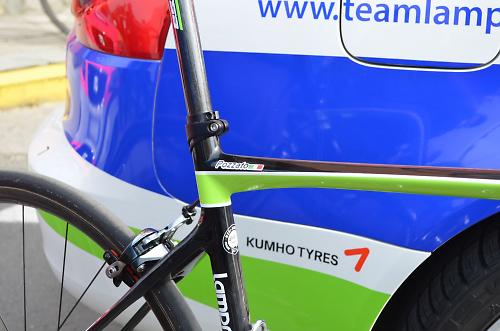 The new Ride SL has a slender and bowed top tube, and a stepped top tube/seatstay design. 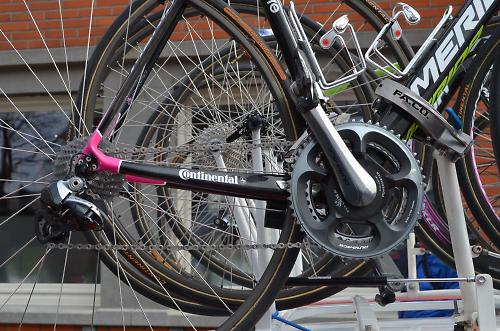 With most pro riders using SRM Powermeter's, which aren't currently compatible with the latest Shimano chainset, they have to resort to the previous Dura-Ace 7900 chainsets for the time being. It's surely only a matter of time before SRM produce an updated version of their power meter. 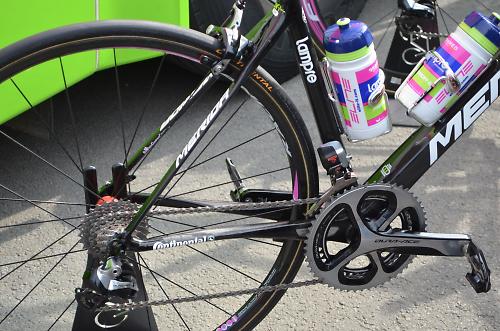 Notice the difference in the chainstay design between the Scultura and the Ride, the latter - pictured above - has very flattened stays designed to allow them to flex along their length. This combines with skinny seatstays to allow the rear of the frame to absorb a good amount of road vibration. It's a Shimano Dura-Ace Di2 9070 groupset here. 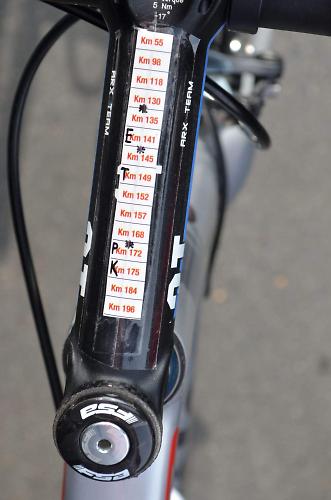 Despite the digital age we live in, many riders still opt for handwritten, or in this case neatly printed, cue sheets taped to the stem. This example marks out some of the cobbled climbs and we’re presuming the two stars indicated the feed zones. Luckily, this rider has a very long stem to fit it all on. 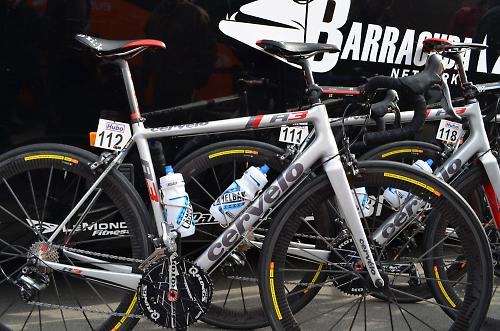 Team Garmin-Sharp were riding a mix of the trusty R3, which has been around for, ooh, years now, and the newer and lighter R5. The bike picture belongs to Andreas Klier. There's sign of the new RCA yet, if that is ever going to be used by the team. The team are sponsored by Mavic and seen here are the Cosmic Carbone Ultimates. It’s a 1,185g tubular wheelset using an all carbon-fibre construction. Don’t expect to see Mavic’s new Cosmic Carbone 40 carbon clincher in the pro peloton anytime soon. 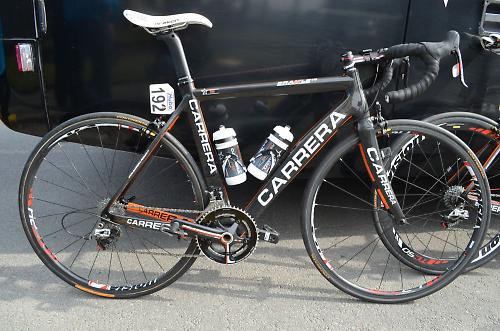 A less familiar sight now: the Carrera of Pro Continental team Accent Jobs-Wanty. It comes with a Shimano groupset, Vision wheels (from FSA), and an FSA chainset. 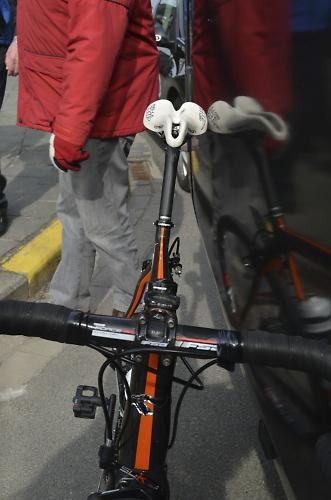 Saddles are very much a personal thing, but this Selle SMP Drakon saddle is an unusual choice outside the world of triathlon, where it is popular. It works for Tim De Troyer, though. 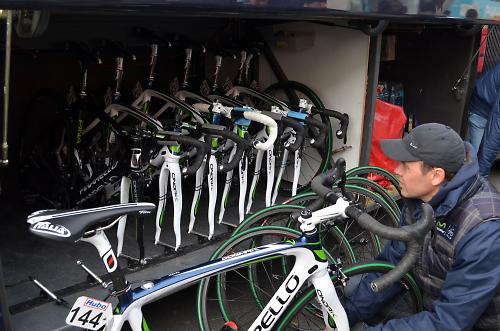 Plenty of space in the belly of the Movistar team bus for a small fleet of team bikes. They use a tidy little rack to fix the fork in place with the bars at an angle in order to get more bikes packed into such a tight space. 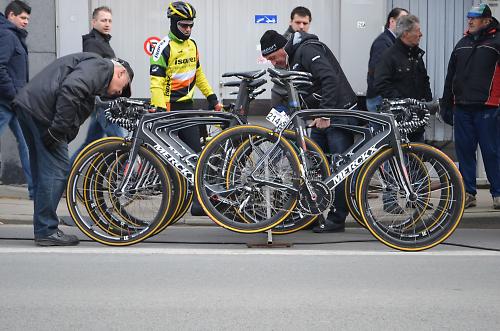 Merckx bikes are sponsoring the Pro Continental Topsport Vlaanderen-Baloise team this year, and they’re riding the new EMX-525. The name of the bike celebrates The Cannibal’s number of professional victories throughout his career. The new design has been delivered to optimise stiffness between the wheels to produce the best handling bike possible. 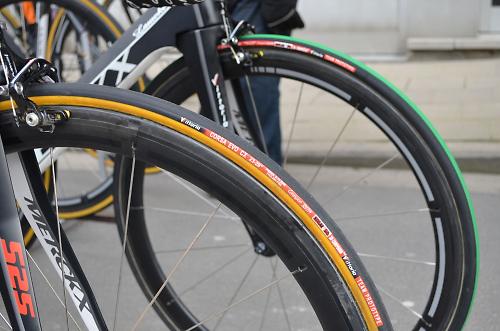 They’re using 3T’s latest Mercurio carbon tubular wheel - you can tell by the spoke slotting in the rim. 3T have worked hard on keeping as much of the weight as possible close to the centre of the wheel to reduce inertia and so improve acceleration. The spoke heads slot into little pockets in the rims that are strengthened using fibres as bridge sections.

Vittoria supply teams branded as Team Prototypes. They’re not prototype tyres, the tyre company just adds this to the tyres they supply to teams to prevent them turning up in the distribution chain. Its 23mm Corsa Evo CXs for Topsport. 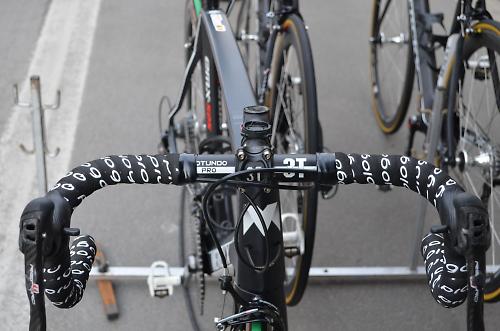 Topsport are using 3T bars and stems, but none of that fancy carbon stuff, it's plain old aluminium here. There's plenty of damage/wear on those Campag Record brake levers. The Prologo bar tape matches the saddles. 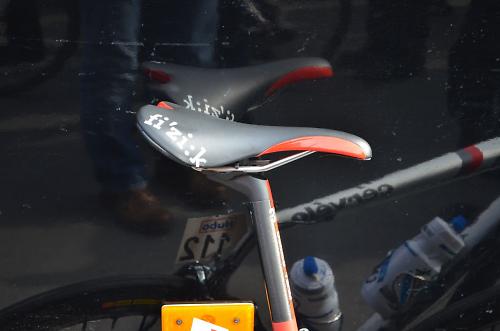 With the weight of bikes easily below the 6.8kg minimum stipulated by the UCI, riders are frequently opting for titanium and alloy railed saddles over carbon railed options.

It’s the same for handlebars and stems. We’ve seen for a long time that pro riders prefer the stiffness and durability of aluminium bars and stems. They’ve been doing this regardless of weight concerns, and it’s a trend that seems to be spreading.

1
Threat to axe New Forest’s off-road cycle network as court criticises “out of control” cyclists
2
Brexit price rises - Canyon covers some costs but UK buyers will still pay more
3
Near Miss of the Day 523: Tipper truck driver pulls out in front of lorry and cyclist
4
Bike at Bedtime: take a look at the Wilier Filante SLR
5
Police investigating cyclist Tony Parsons' disappearance confirm his body has been found
6
Near Miss of the Day 521: Close pass ... by a police van (plus how it all went a bit Kafkaesque afterwards)
7
eBay seller refuses to accept bike auction offer – says "would be unhappy if I sold to Scouser"
8
Council has "no intention to enforce" parking restrictions in segregated cycle lane where cars are parked bumper to bumper