This is the bike that Peter Sagan rode to second place, behind Fabian Cancellara, in the Tour of Flanders classic last month. It’s a Cannondale Synapse Hi-Mod - some of the team, including Sagan, asked to race it through the Classics - the same bike as we got to ride at the worldwide launch in Tuscany recently.

The mechanics didn’t even bother to wash it after his race, so there’s still evidence of Sagan's efforts. There’s sweat, drool and energy product all along the top tube and flowing down the down tube. Dirt still clings to the bottom bracket shell and around the seatstays and chainstays close to the rear wheel. There's also chain lube splattered along the driveside chainstay, from the chain slapping the tube as the bike bounces over the cobbles. 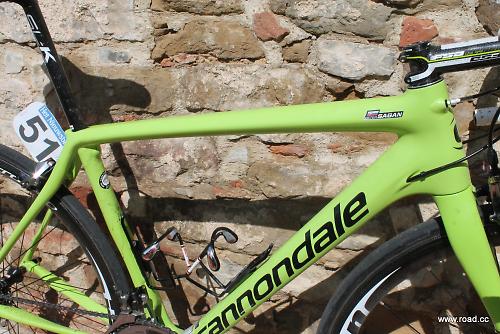 Cannondale had tried to keep the new bike under wraps before the launch, but with Sagan in devestating form so far this year, and choosing to ride this bike over his regular Evo, it was tricky to keep it a secret. Still, all publicity is good publicity.

"When I tried the bike in Belgium I said, 'I want to use this bike,'" Peter Sagan told road.cc. "And also before Tour of Flanders, they asked me if I want to use the Evo or this bike [Synapse]. What is better for your feeling or for your performance? And I said no, this bike is very good on the cobbles and this road it’s perfect. And after I won the race also in the sprint [Brabantse Pijl] on this bike, and Gent-Wevelgem when I come alone, I think this bike is perfect. Cannondale did very good work, and I’m very glad to do the Classic on this bike. It’s better for these roads than the Evo." 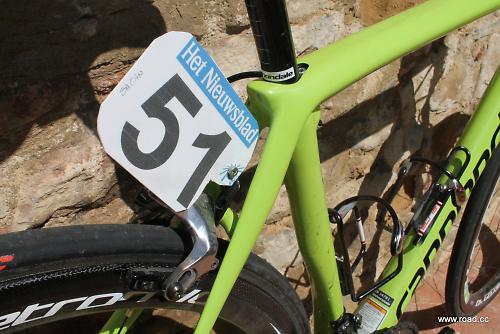 Whilst the rest of the team have to make do with riding stock size frames, Peter Sagan gets a custom frame to suit his particular preference when it comes to fit and sizing. The Synapse is about 3cm taller in the head tube than the Evo, and it also has a shorter top tube. Rather than try and make a stock size fit, like the other team riders do, Sagan has a special frame made for him. This requires making a set of moulds just for Sagan and moulds are expensive, so Sagan is getting some special treatment here. It combines the top tube of a 58cm frame with the head tube and seat tube of a 54cm. This allows him to get stretched out, and the handlebars low. It’s the same position as he has on his SuperSix Evo. We had a good look at his Tourminator custom Evo at the Tour de France last year. Most of the pro riders prefer such a stretched and low position, and they can cope with it. 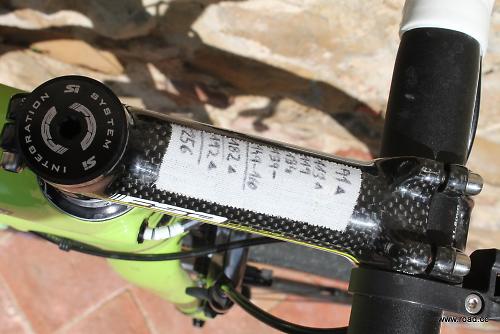 Because of the custom geometry, Sagan doesn’t have to resort to a crazy stem like we’ve seen on some bikes in the Classics (remember Taylor Phinney’s 15cm -17 degree stem on his BMC GranFondo?). He therefore has a 12cm FSA OS-99 carbon wrapped aluminium stem fitted. His handlebar preference is the traditional bend of the FSA Energy T aluminium bars. It’s a shape that many of the pro riders seem to prefer. This bike is straight from Tour of Flanders and it still has the important course markers on it. 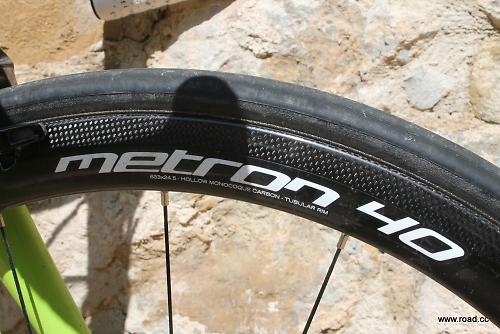 The Cannondale team have been using Vision’s Metron 40 carbon tubulars this year. It’s a 1,160g wheelset and uses the latest wide and rounded rim profile for improved aerodynamics in a range of wind directions. Tyres are Kenda SC tubulars. They look a little bit like Veloflex’s Arenberg tyre, favoured by other teams including Team Sky. 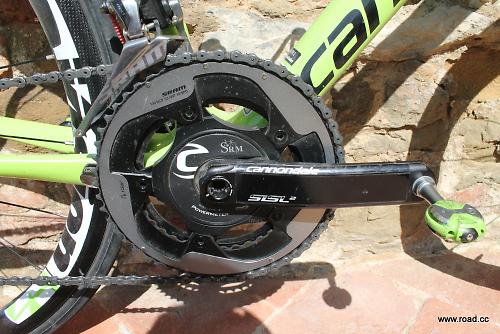 Groupset duties fall to SRAM Red 10-speed, with a 53/29 chainset incorporating an SRM Powermeter. We imagine the team will be making the switch to Red 22 soon. We've been told that none of the pros will be on it for the Giro d’Italia, so maybe it'll get an airing at the Tour de France. Sagan rides 172.5mm crank arms and for this race chose an 11-28-tooth cassette. A sponsorship deal with Fizik sees the Slovak rider opting for the Aliante saddle with metal rails - we’ve spotted a lot of riders shunning carbon rails, as they don’t need the marginal weight saving and the metal provides a little more flex. The saddle is propped up with an FSA SL-K carbon 25.4mm seatpost. 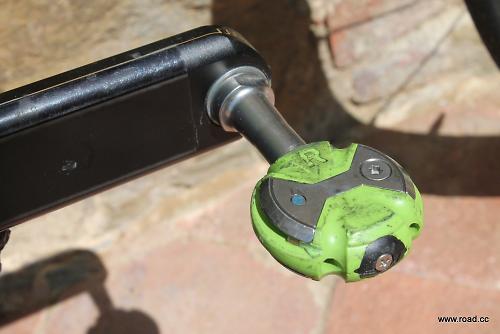 His pedals of choice are Speedplay, nicely coloured matched to the frame. Also colour matched are the SRAM Red levers and rear mech, the red flashes replaced with a splash of green. The final details are the Elite bottle cages.