Danish brand Principia have joined the disc brake movement with the release of their new Principia Revolution, a bike fitted with Shimano’s new hydraulic disc brakes, a Di2 groupset and 15mm bolt-thru axles in place of regular 9mm quick-release axles. 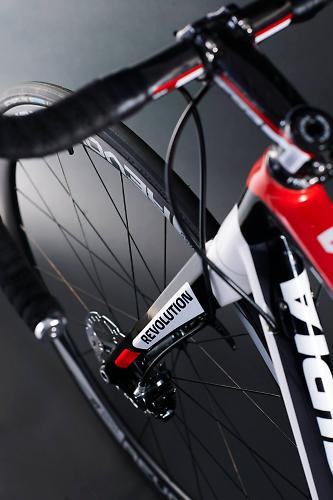 We don’t have all the details on this new bike just yet (we're working on it), so in the meantime we’ll have to indulge in a spot of light speculation. The frame and fork are clearly made from carbon fibre and it’s been designed from the outset around disc brakes. The most interesting aspect is the use of bolt-thru axles front and rear, 15mm at the front and a 142x12 out back.

142x12 is a rear axle standard that has been readily adopted on mountain bikes in recent years, and comprises an axle with a 12mm diameter with 142mm rear hub spacing. It's a system designed to be as quick and easy to use as a regular quick release, but with the extra security, strength and stiffness offered by the thru-axle design. Why 12mm? Because that's the largest size that will fit through a cassette and lockring without a complete redesign.

The regular quick release hasn't really changed since Tullio Campagnolo first stumbled across the idea in 1927, at the side of the road during a race, when he was struggling with the wing nuts that were standard on road bikes in the early part of the 20th Century. 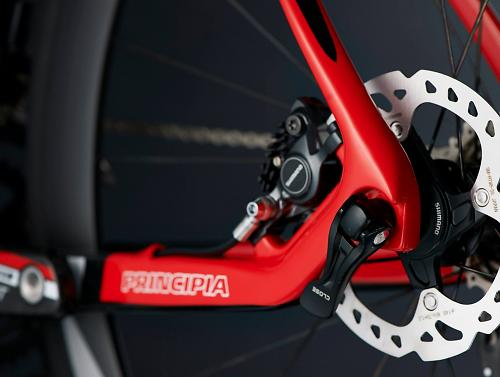 This is the first time we’ve seen a road bike with bolt-thru axles. Giant recently released their TCX cyclocross bikes with a bolt-thru fork and regular QR rear axle, but as for road bikes we’re struggling to recall any others. Even the Colnago C59 Disc, one of the first disc-equipped road bikes, only had regular quick release axles. We really expect to see a lot more thru-axle use on the next generation of road bikes designed with Shimano and SRAM’s disc brakes in mind, just as has happened over in the mountain bike world. 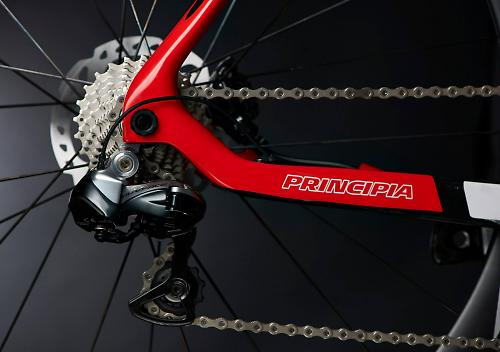 Principia are using Shimano's recently released hydro disc brake. The rear disc brake uses the post mount standard and is placed inside the rear triangle. The hoses are routed externally, with the front host passing down the back of the fork. The wiring for the Di2 groupset is routed internally. We can presume the carbon fibre laup has been developed specifically, with extra carbon in the high stress areas near the disc brakes, and weight saved in the seatstays which no longer need to support caliper brakes.

A lot of people believe disc brakes will take over in road cycling in the next 10 years, including TRP and SRAM.

Rotor size with the Shimano disc brakes appears to be 160mm at the front and a smaller 140mm at the back. Principia have incorporated the new Shimano Di2 seatpost battery to hide it away, keeping the lines of the frame clean. Componentry includes the new FSA K-Force Light Compact BB386EVO chainset that we told you about the other week.

We'll have more details on this bike, including pricing and availability, soon.