Debuting at last month's Eurobike and being shown at the upcoming London Cycle Show is this cunning piece of kit from Fixie Inc and Gates Germany. The Kickflip hub is, they reckon, the first purpose built flip flop hub for belt drive bikes.

Rather than being a screw-on the new hub works on a six bolt fitting system similar to that used on mountain bike disc brakes, the idea being that if it can handle the forces generated by a disc brake then a fixed gear drivetrain should be no problem. The other advantage that bolts have over a screw on hub is that it means that the belt is held exactly in position: exact alignment is even more critical with a belt than with a standard chain, even a slightly wonky chainline will result in uneven belt wear and a loss of efficiency. 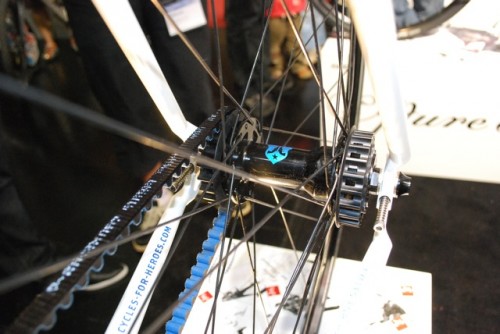 According to their fans the big plus points of a belt drive fixed are that you get a much smoother riding experience both in terms of acceleration and braking. There's no slack in the chain because the belt material soaks up any flex. It's also 300g lighter than a similar set up using a chain, you don't need to lube it, and consequently you don't need to worry about getting an oily trouser leg so don't need to faff about rolling up your skinny jeans or tucking 'em in your sock.

For more pics of Fixie Inc's new hubs + bikes check out our Eurobike Fixed 3 gallery, or if you only want to look at Fixie Inc's stuff click on the Fixie 2010 tag.

Fixie Inc's flip flop hub solves what had been one of the minuses of the system in that you were restricted to either a fixed for free set up but couldn't combine both in one hub. There is still one obstacle to overcome as Holger from Fixie admitted when we spoke at Eurobike: the question of different sized belts and pulleys (belt drive bikes don't have cogs). At the moment with the amount of adjustment available at the dropouts Holger reckons a standard belt is capable of taking the equivalent of 23, 22, 21, or 20 tooth cogs but no lower.

Actually Holger preferred to talk in terms of gear ratios – which makes sense. So the standard belt drive set up gives a range of ratios between 2.5 and 2.8 with 2.6 being suited to inner city urban riding and a higher ratio better for suburban situation according to Holger. At the moment if your riding requires anything outside those ratios you won't find a belt to fit, something Fixie and Gates will be looking to rectify over the course of this winter. Because of their chainstay length fixed bikes can only use the shortest available 113 tooth belts, MTBs for instance use 118 tooth belts. Front chainwheels are available as 48, 50, 55, or 60 tooth options. Rear pulleys as thread ons only 20, 22, 24 and 25. So if you wanted to make your current bike belt drive you have to start with your gear ratio of choice and check if the resulting chanline is within the travel area of your bike's dropout. You can find a way of making that calculation here.

Interestingly the new Kickflip hub has a non-standard 21 teeth. For the time being if you want a Kickflip you'll have to buy the bike to go with it as it will be only available as original equipment on the 2010 Peace Maker. 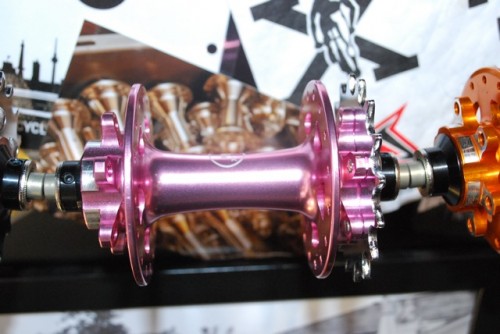 Keeping up the six bolt theme but coming at things from a very different direction were these beautifully CNC'd fixed/fixed flip flop hubs allowing you to run two different cog sizes and change gear with the handly erm, unbolting, flipping, and re-bolting of a wheel… oh, and remember to stop first. Not that's proper old school with a modern twist. Or indeed without the twist – that's the reason Fixie have gone for the bolt option to eliminate any chance of play in the hub. They are calling it the Marshall hubset and it will be available to buy online soon.

Both of Fixie Inc's new hubs will be at this week's London Cycle Show along with their 2010 range including the belt driven Peace Maker.

Get a discount on your Cycle Show tickets with road.cc!

Coming to the Cycle Show? you can get a discount by quoting our special code when you book. Tickets cost £11.50 for adults, but road.cc users who book using our special promotional code can get in for a tenner. To get your discount when buying tickets, visit www.cycleshow.co.uk/rcc - the ticket offer code is RCC, and the ticket price is £10.