Should DfT try to predict the future, or prevent it?
by John Stevenson

The CTC has criticised the Department for Transport’s latest predictions of increased car use and a drop in cycling over the next 25 years as a “self-fulfilling prophecy”.

Writing on the CTC’s website, campaigner Chris Peck explains that the Department for Transport’s National Transport Model (NTM) forecasts a 43 percent increase in car use by 2040, but a gradual fall in cycling after an increase over the next few years.

Underlying the predicted increase in car use, the modellers say, is the assumption that there will be "no change in government policy beyond that already announced."

Chris writes: “The problem, however, is that although the NTM is only supposed to be a guide to what might happen, it is treated by policy makers as the inevitable outcome that we must plan for.

“This is the 'predict and provide' approach that, in essence, is a self-fulfilling prophecy: your model predicts that car use will continue untrammelled, and further predicts huge congestion problems that might result. So, in order to prevent that congestion, you build new roads and plan new developments around everyone driving for 2/3rds of their trips and, decades later, hey presto: that's what happens!”

But it doesn’t always work. The Department predicted a fall in car traffic in London of 1.5 percent between 2003 and 2010. In fact London car traffic fell 7.8 percent as a result of investment in public transport, congestion charge and other measures intended to stop London from completely grinding to a halt.

Given all that, what’s the NTM predicting for cycling? A decline. That’s bad news, because the predicted increase in car travel is the rationale for the spending on roads announced earlier this year. As Chris Peck points out, that means the increase is therefore likely to happen.

If the NTM were predicting an increase in cycling, planners might decide to build more cycling facilities, but instead they predict a decline in cycling and walking trip lengths. 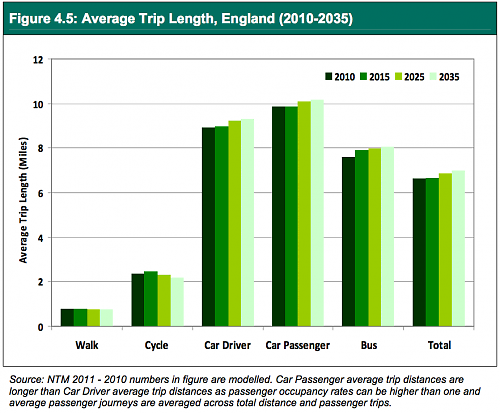 But the CTC and other transport experts doubt the validity of the DfT’s modelling.

Chris Peck points out that the 2010 figure for cycling trip length is already wrong. Average cycle trip length in 2010 was 2.8 miles and it’s risen since then, Peck says the prediction “defies recent changes in trip length which have seen cycle trips increase by 50% (2.2 miles to 3.3 miles) over the last ten years, whereas car trips remain unchanged in length (8.4 miles long average).” Phil Goodwin, emeritus professor of transport at University College London, is also unimpressed. He told The Times: “It is not just that they got the numbers wrong, they got the direction of change wrong, which seems to me to be a much bigger problem. If it says it is going down when it is going up, there is something seriously wrong with the model.”

CTC policy director Roger Geffen said: “The self-fulfilling predictions of the National Transport Model are seriously undermining the case for quality cycle facilities. By assuming that motor traffic will increase massively while cycle use remains static, it ensures that councils’ computer programmes say ‘no’ to cycle facilities.”

Chris Peck says the example of the model’s failure in London is salutary. “If they can get it so wrong in London, the estimates of the rest of the country could be equally rotten. With cycling growing - and growing fast - and car use stagnant or declining, the NTM's continuing assumption of ever increasing motor traffic looks backward and in need of fundamental overhaul.”

As writer Ray Bradbury - famous for the dystopian novel Fahrenheit 451 - once said, “People ask me to predict the future, when all I want to do is prevent it.” Maybe the DfT should take a leaf out of Bradbury’s book.