A bike rack that incorporates the outline of a car in its design to highlight how many bicycles can be parked in the space taken up by one motor vehicle has been removed from a town in Lincolnshire within 24 hours of being installed after traders complained that taking away one car parking space could affect their takings.

Studies around the world, including in the UK, consistently highlight that people who arrive on main shopping streets by bike are likely to visit more often and to spend more money while there compared to those coming by car.

You wouldn’t know that, however, from the reaction reported by Lincolnshire Live to the installation on Holbeach High Street of a Car Bike Port able to accommodate 10 bicycles, similar to the ones pictured in the gallery above and supplied by London-based Cyclehoop. 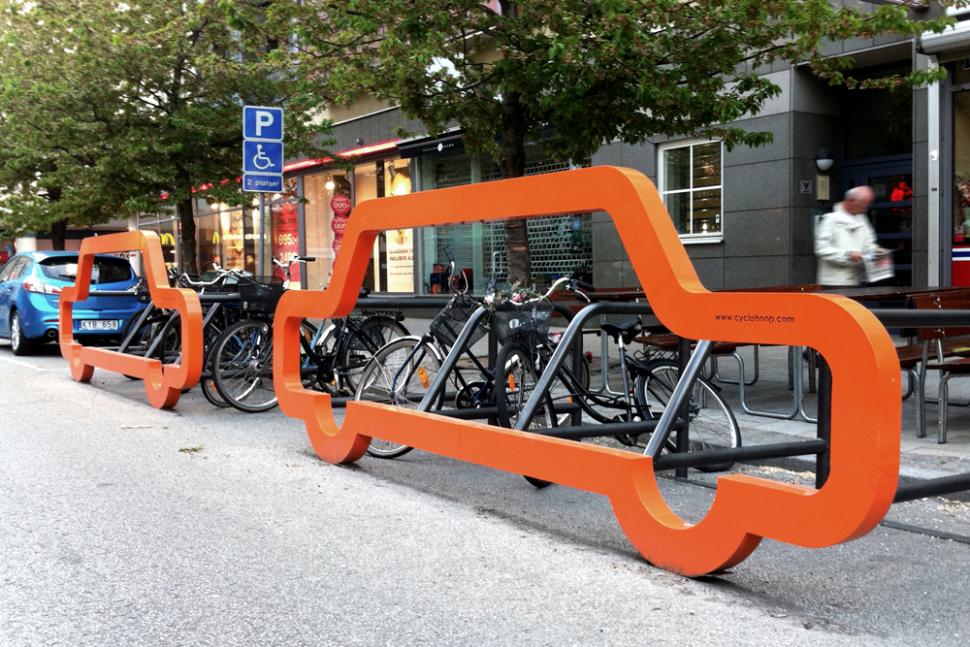 One unnamed local business owner told the website: I’m all for greener travel but we’re on our knees thanks to coronavirus.

“We need all the help we can get and that includes encouraging people to come and spend their money. Car parking has always been an issue in the town so what do the council do? They make it even harder to park your car.

“You would have hoped someone in the council might have looked at these cartoon-cars and thought, hang on, how can people park their actual real cars next to them?”

Those comments are reflective of a misconception that is often raised in relation to schemes aimed at encouraging active travel, such as the Mini Holland initiatives in three London boroughs in recent years – namely, that the only mode of travel people use to go to high streets is by car or, at a pinch, public transport.

In fact, studies again repeatedly show the fallacy of this mindset, with local business owners consistently overestimating the proportion of their customers who arrive by car, while being unaware of just how many come by bike or on foot.

One local resident, Sharon Rudd, writing on Facebook, commented: “Was the person who designed it drunk???” (Cyclehoop founder Anthony Lau has assured road.cc he wasn’t).

Another person commenting on Facebook, Judith Partridge, said: “Surely if it’s supposed to be a bike rack shouldn’t it be in the shape of a bike not a car?”

As we mentioned above, the product is deliberately designed to show the number of bikes that can be stored in the space occupied by one car – although, as it happens, Cyclehoop does also make bike racks in the shape of a bicycle, the one below being just off Regent Street in London’s West End. 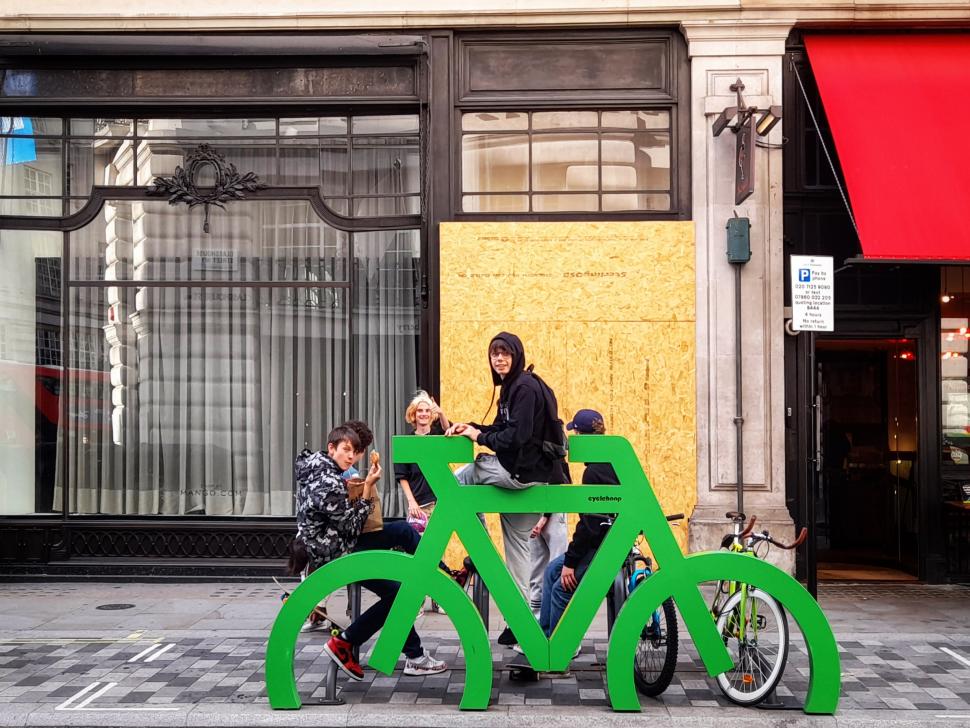 Lincolnshire County Council has bought 20 of the bike racks using emergency active travel funding from the Department for Transport (DfT).

Councillor Richard Davies, executive member for highways at Lincolnshire County Council, said: “The Department for Transport granted us over £100,000 from the first round of the emergency active travel fund to support the installation of temporary projects to help aid the county's recovery from Covid-19.

“As part of that funding, we're installing more bike parking in towns across the county, to make it easier for people to cycle into their town centre.

“When we were awarded the funding, the DfT gave us very short timescales to install the changes, and there just wasn't time to get feedback from every community about each location.

“But the changes are all on a trial basis – if they work they'll stay and if they don't we can rethink.

“I'm grateful that residents and Holbeach Parish Council have let us know that they don't think this type of bike parking is suitable for the location, so we'll move it. It can instead be trialled in a different part of the county.

“We have another type of bike parking we've purchased as part of this fund, which is a bit more inconspicuous, and we're working with the local county councillor and the parish council to find a suitable location in Holbeach for this.”

The government has been encouraging people to switch to active modes of travel during the coronavirus crisis due to the need to maintain social distance on public transport as well as trying to curb congestion caused by higher levels of motor traffic on the road.

In May, Prime Minister Boris Johnson, speaking in the House of Commons, promised a “new golden age for cycling” – and it turns out he is a fan of Cyclehoop’s Car Bike Port, sitting on one here with the company's founder.