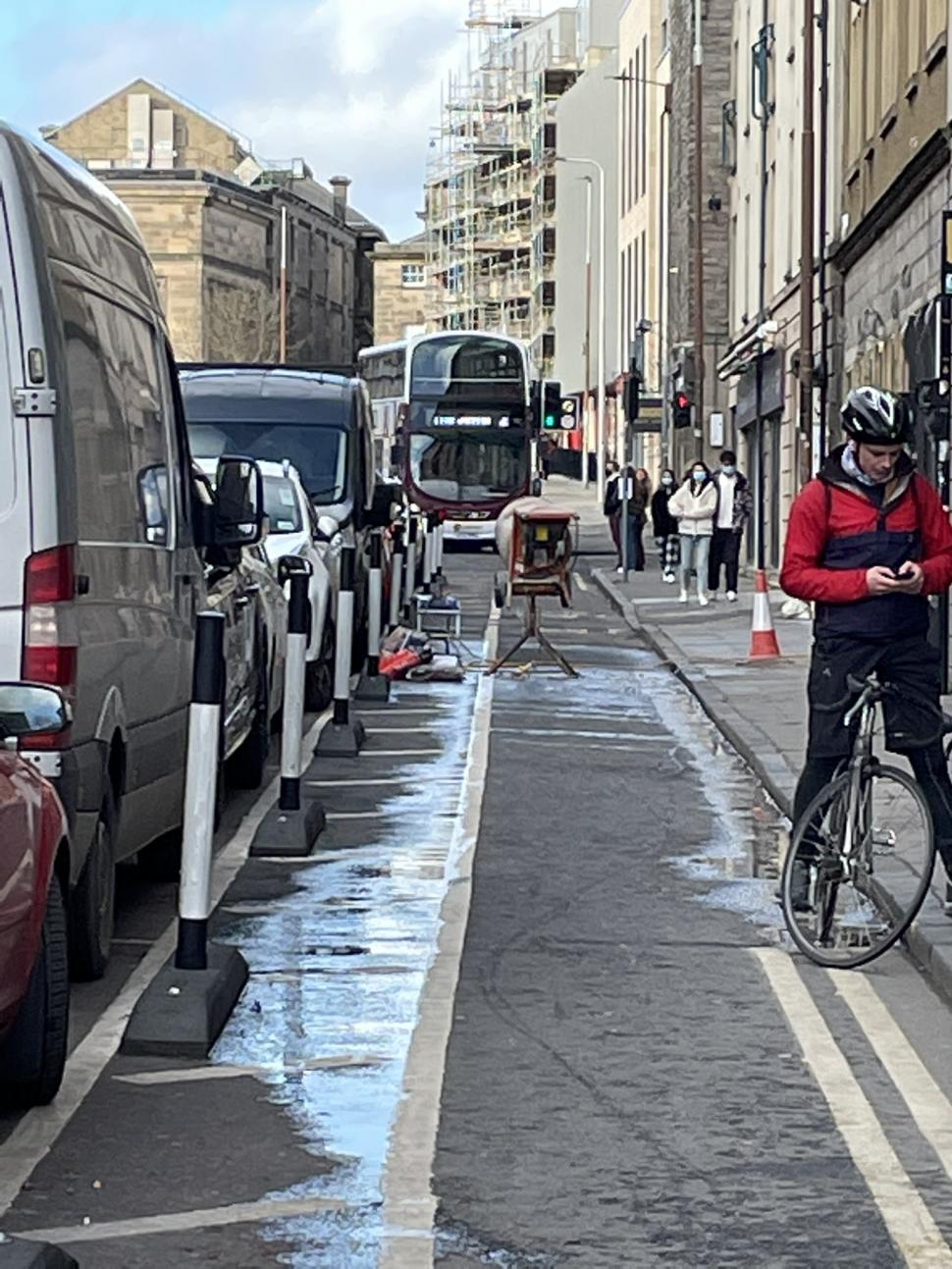 A 67-year-old cyclist says he was left shaken after being pelted with cement by an angry worker accused of blocking a cycle lane in Edinburgh.

John Mitchell was cycling towards Potterrow from Nicholson Square, in the city’s Old Town, near the University of Edinburgh, when he was forced to slow down after noticing that the bike lane he was using was obstructed by a cement mixer.

Mitchell stopped to film the obstruction before asking one of the workers if they had permission to block the path.

After an angry confrontation, Mitchell says he started to cycle away when the worker threw a shovel full of cement at his back, plastering his jacket and parts of his Moulton bike.

"When I approached Potterrow from Nicholson Square it was all cornered off with no signs put up and there was a cement mixer blocking the road,” Mitchell told Edinburgh Live.

"As I headed into that section, the cement mixer was completely blocking the road and with the barriers up I couldn't get out, so I stopped and got off to video it.

It’s actually Potterrow. I phoned the police as it was an assault pic.twitter.com/l8Hkf5rEzF

"There was a couple of workmen in the restaurant and a big chap came out. I asked if they had permission and he said, 'No and I don't f****** care', when I said that wasn't on.

"I then told him I'd report it to the council and he replied in an aggressive manner, 'do what you like.' He was over six foot tall and built like a tenement block. I'm 67 and five foot six, so I decided to just leave it and got on my bike to cycle away,” he said.

"As I squeezed onto the pavement to cycle off, he threw a spade full of cement at me. I couldn't believe it and said I'm phoning the police, to which he said again 'phone who you f****** want.' It's outrageous so I phoned 999. I was concerned if he were to behave like that and hurt somebody else.

"There was a witness there, a young student who saw it and said that's not okay. The police came around this morning [Wednesday] and took a statement.

“They said they are investigating but they might charge him with vandalism rather than assault, as assault has to show intent to harm.

"I was so shaken, I just went home. My bike and clothes are covered in cement. He covered me in it. It’s a wax jacket so I’m hoping it’ll brush off. Hopefully it will come off my old Moulton easily.”

According to Mitchell, police are now investigating both the worker and his employer, while the City of Edinburgh Council has also said that the matter has been passed to their roads team for further action.