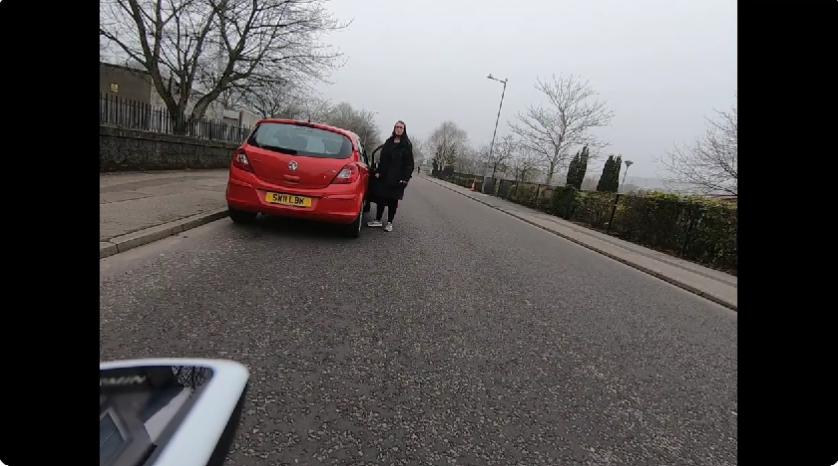 near miss of the day 749 screenshot - via Dr Hanne Bruhn

Near Miss of the Day 749: Close passing driver stops vehicle to tell cyclist she was "all over the bloody road"

Our regular series featuring close passes from around the country - today it's Aberdeenshire, where someone needs to brush up on their Highway Code...
by Jack Sexty

For today's instalment in our regular series we'd rather not have to run, a dangerous driver doesn't appear to grasp that what she did was dangerous and illegal - even stopping to tell the victim that she'd brought it on herself.

Warning - upset driver footage
I usually don't stop for 'the chat' after prompt and constructive feedback to drivers but did today - so much fun to be told how to ride [rest of this sentence has been censored] (and yes, I had lights on). pic.twitter.com/3QynIR6GXq

Dr Hanne Bruhn was cycling in Aberdeenshire, and moved out to overtake a row of parked cars. You'd think the other option would be pretty ill-advised... however that appeared to go over the head of a driver who still decided to overtake with inches to spare while Dr Bruhn was avoiding the obstacles.

Stopping her vehicle, the driver can be heard saying: "You're cycling all over the road. Cyclists are supposed to be in at the side.

"Yes you are. You're all over the bloody road."

Dr Bruhn tells the driver she is recording the incident. The driver replies: "I haven't got an issue with that, I haven't done anything."

When asked on Twitter how she was supposed to avoid the parked cars and stay at 'the side' of the road, Dr Bruhn replied: "I'm a superhero and can fly".

She also told road.cc it is unlikely she will be involving the police, saying that her local force "are probably struggling as it is and usually not much help up here."