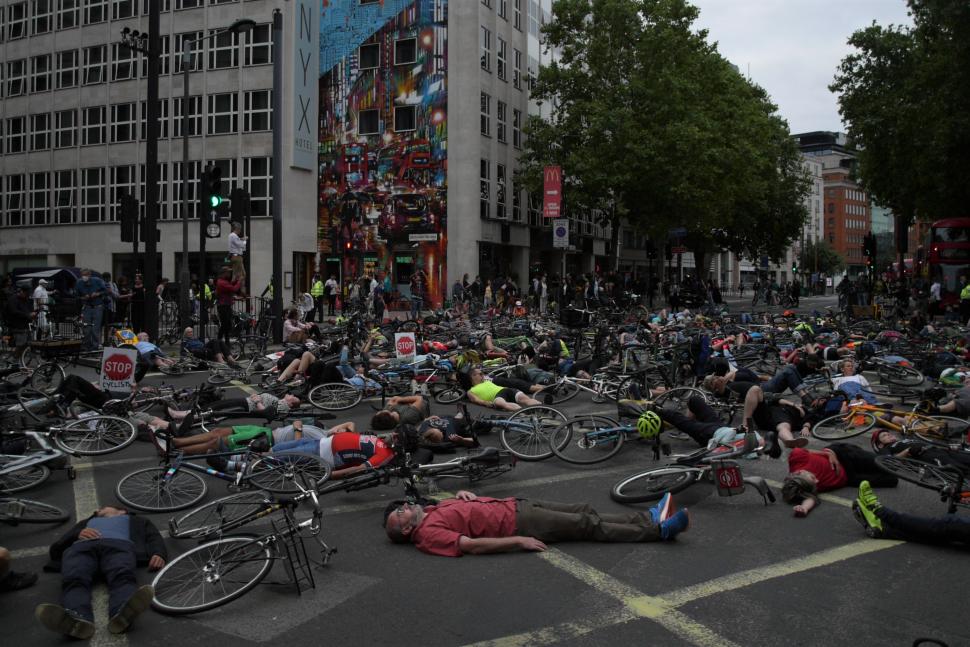 Emergency measures were first introduced in September following the death of children’s doctor Marta Krawiec, the fourth cyclist since 2008 to have been killed at the Southampton Row and Theobald’s Road junction
by Ryan Mallon

Camden Council today announced that work will begin next week on permanent safety improvements at a junction in London’s Holborn district where several cyclists have been killed in recent years in collisions involving large vehicles.

The most recent death, of children’s doctor Marta Krawiec in August 2021, at the junction of Southampton Row and Theobald’s Road led to protests by activist group Stop Killing Cyclists and London Cycling Campaign.

The junction forms part of the notorious Holborn gyratory, where safety measures announced in late 2019 by Camden Council were put on hold after the Transport for London (TfL) Liveable Neighbourhoods programme was frozen.

Dr Krawiec’s death last year meant she was the fourth cyclist killed at the same junction since 2008, while a further three have died at other junctions on the Holborn gyratory.

“Immediate” safety measures were introduced by the council in September in response to Dr Krawiec’s death, which aimed to provide more space for people on bikes. A month later, 7,500 people signed a petition urging London Mayor Sadiq Khan to “take rapid action on dangerous junctions” in the city.

Today Camden Council confirmed that the emergency safety measures introduced at the junction in September will be followed by a permanent overhaul of the road layout, including new segregated cycle lanes, bike boxes, bus, taxi and cycle lane improvements and a redesigned traffic light system for cyclists.

New “cycle gates” and early starts at traffic lights will be introduced to allow cyclists to navigate the junction separately from other traffic which will, according to the council, “help reduce conflict between cyclists and motor vehicles.”

Councillor Adam Harrison, cabinet member for a Sustainable Camden, said in a statement: “We are determined to do all we can to make the Southampton Row-Theobald's Road junction as safe as possible for cyclists.

“In September we said that the changes we introduced then would be just the beginning. We are now set to make the permanent safety improvements needed to make this junction safer for everyone.

“We have worked together with the local community, ward councillors, cycling groups, TfL, London's walking and cycling commissioner, and the mayor Sadiq Khan to agree changes that will transform how cyclists use the junction and ensure that their safety is prioritised.”

Harrison praised the speed in which the project was able to be implemented, and called for greater clarity over a long-term financial plan for Transport for London.

“I believe this approach of working at a rapid pace to tackle unsafe junctions is one that TfL and boroughs should adopt more broadly, in order to bring us closer to 'Vision Zero' of no road deaths and casualties as soon as we can,” he said.

“To keep people safe on our roads, London desperately needs a proper deal. Uncertainty over what TfL can fund next means we may not be able to fix what we need to, and in discussions about other parts of the borough of Camden where I have concerns it is clear that the current situation means we are unable to plan properly for other, much-needed safety changes."

Work on the junction is scheduled to begin on Monday 24 January and will last approximately six weeks.