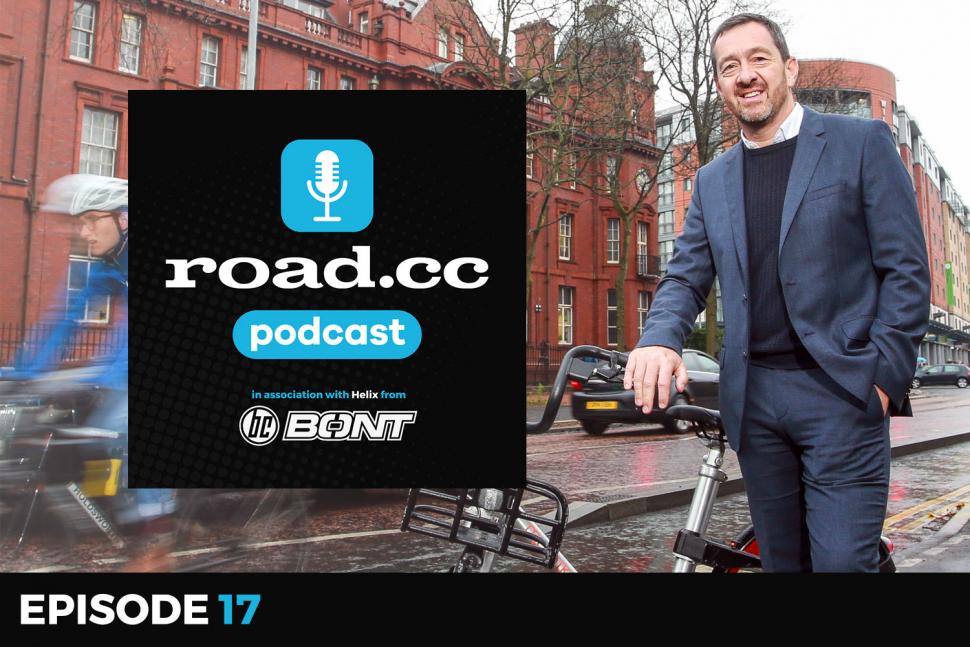 "The bicycle is the answer": Chris Boardman talks about Active Travel England, Highway Code changes + more on episode 17 of the road.cc Podcast

We’ve got a real scoop for you today on episode 17 of the road.cc Podcast in association with Helix from Bont – unusually there’s only one guest, but when that guest happens to be Chris Boardman in a week that began with him being announced as the interim commissioner of the new body Active Travel England, and ends with the widely-discussed changes to the Highway Code coming into effect, there couldn’t be a better time to speak with him.

Boardman’s appointment to his new role was kept tightly under wraps, only being announced on Saturday and put podcast host George Hill’s mind at rest about why the Olympic and world champion turned cycling and walking campaigner had seemed so reluctant to set a date for a chat; he was simply waiting for his new role to be made official before speaking with us, because he thought that would make for a much more worthwhile conversation, and we think you’ll agree he was right.

Announced in the government’s Gear Change strategy published in 2020, which Boardman describes as “an absolutely sensational, joined-up plan for how to get public and active travel modes to work together,” he jumped at the chance to get involved in shaping the agency ahead of its formal launch last weekend.

“It’s taken over a year,” he explained. “I’ve been helping on the on the fringes, and then more and more involved in what active travel what Active Travel England needs to be. And it’s a hugely complex thing to set up. It’s a whole other business, if you like, that works with the Department for Transport and government, but is not part of them.”

While the government will continue to formulate policy on active travel, it will be the new agency that will deliver it, including inspecting plans for walking and cycling schemes to ensure they meet the appropriate standards – “and if they don't meet the standards, the cash can be clawed back,” Boardman says.

He says that “probably the most important” role that the agency will play is to “train and upskill local authorities to deliver stuff because they’ve never had a budget, they’ve never had this as a constant partner like highways where they have a constant stream of cash and jobs to do.

“They’ve never done this before. So the engineers don't exist, the expertise doesn’t exist in small pockets. So we will disseminate that information and ultimately help. So it’s nice, you’re not just judging, but you’re actually helping them achieve the level required to get funding.”

Over the past decade or so, whenever the idea of having a cycling or active travel champion for England has come up, Boardman’s name has always been the first to come to mind, but he has said previously that it is a role he would only take on if the conditions are right – and now, it seems, they are.

“Well, an independent body with £2 billion, a set of regulations ‘already in place for the standards of infrastructure to enforce, and a strategy that says, you must incorporate cycling and walking into all of your bus, your train, your road schemes going forward. That's about as good as it gets.

“It’s like it’s exponentially more than I ever thought that we’d get to. We did it really quickly. So whatever one’s opinion is on wider politics, this government has delivered for active travel, something that we've never said we haven't seen in a lifetime.

“And it is a genuine opportunity, and that I would imagine is cross-party as well. You know, this transcends politics, I would hope, you know, this is health, this is climate, this is standard of living, this is levelling up, it is everything, because it’s what links people together.

“So I am incredibly excited, and very scared of the opportunity and the responsibility to get it right. So it is all consuming as, unfortunately, my wife will tell you, is pretty sick of hearing about dropped kerbs, and a narrowing the radius at junctions at the moment. But it is utterly fascinating.”

Turning to the Highway Code changes coming into effect on Saturday, Boardman said: “All it’s doing is reinforcing what good drivers do already.

“And I think the impact of it will be minimal, which might sound a bit pessimistic, it’s not, it’s a reinforcement of good practices. And it will take time.

“So there are no legal changes in the Highway Code. But now there is clarity. And we know that this document is used in courts,” he continues, highlighting that ‘There’s something I don’t know’ is not an excuse – you’re expected to know this.”

He adds: “The point is it signals we have a hierarchy of road users, we have never had that before. And it’s all just moving us in the right direction.

“So I would hope people don't expect huge things, but they have clarity. And if somebody says you should be in single file, say, actually you don't read the Highway Code, the ambiguity is gone. And we can be thankful for that.”

Of course, besides his new role and the Highway Code revisions, we weren’t going to let the opportunity of a chat with Boardman pass by without asking his thoughts on the Hour record, Zwifting and much more – including why a gravel bike is his ride of choice these days. Boardman also added that he hoped for a so-called "quiet revolution" in the coming years, saying: “The bicycle is the answer, it always has been and it makes a nicer place to live.

"Hopefully this is the bicycle renaissance, and it will go down in history as such.”

We hope you enjoy listening to this episode as much as we enjoyed recording it – as ever, let is know in the comments what you thought of it, and feel free to suggest future guests or topics you would like to see covered by emailing podcast [at] road.cc