10
10
Impressive attempt to give the sport a definitive reference book for the year
Weight:
1,990g
Contact:
www.theroadbook.co.uk

The Road Book is essentially a statistical summary of the 2018 professional cycling season, with many added extras. Whether it is a long overdue and welcome arrival, or an idea that has no relevance today, only time will tell. Either way, it does a fine job of delivering on the promise to be 'the first ever comprehensive cycling almanack'.

It is tempting to summarise this book as being a 'Wisden for cycling', and stop there; while true, the editor probably wouldn't want to pay me for that, so I will elaborate.

The Wisden Cricketers' Almanack is an obvious comparison, as is the Football Yearbook, and The Road Book publishers have obviously learned a lot about what makes those publications successful.

There have been some other attempts to produce a similar book for cycling over the years, but from what I can tell they have not been as comprehensive as The Road Book, nor in English, and most have now fallen by the wayside – with the annual Flemish publication Velo being one of those still going.

Some will question the relevance of such a publication in an increasingly digital age, but there is good evidence that digital books are no longer taking share from print books, with both co-existing after having found their place in the market. Not only that, the fall in the number of bookshops on the high street may have levelled off.

I believe there will always be a place for reference books alongside internet searches. For me, print and electronic media each offer a different experience, with neither always being better than the other: you don't discover information in the same way on each format.

Cillian Kelly is described as 'a renowned statistician', has 'a reputation for being a good source of unusual cycling statistics' and his 'day job involves lots of maths and computer code' – which sounds like just the sort of person you need for a job like this.

Let's look at what you get in this inaugural almanack.

The bulk of the book comprises race results for all senior professional road races and time trials in 2018, listing the results for WorldTour, .HC, and .1 races – essentially this is any event that a WorldTour-level rider could ride, male or female. That is a lot of races. 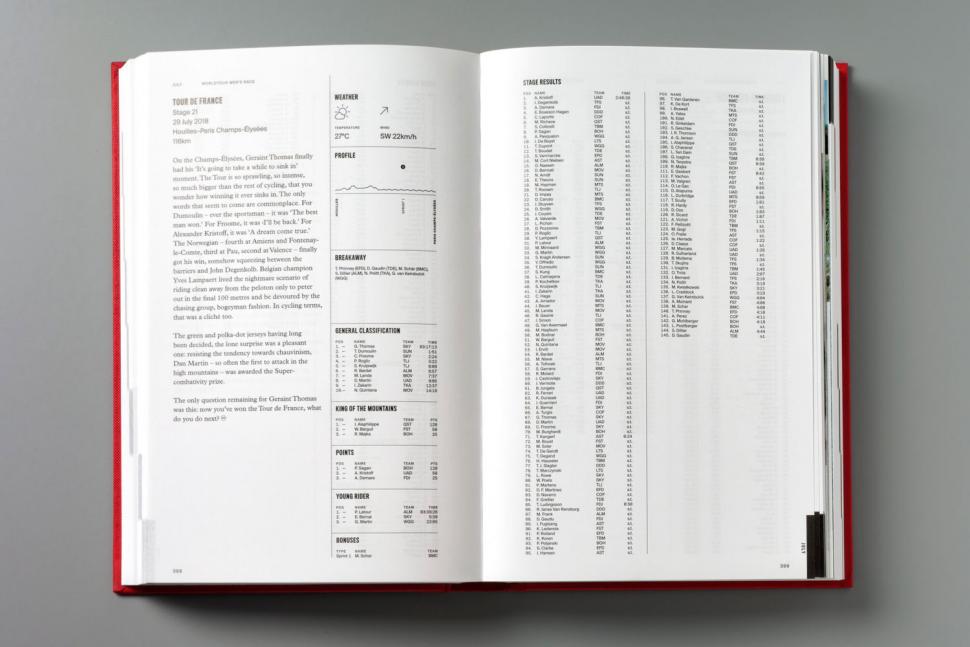 For 'lesser races', placings are given down to 20th, plus the top 3 of GC and any other classifications. This is accompanied by a brief weather report, which is more of a challenge than it sounds: first you have to acquire the basic information from weather services, and then you have to summarise the conditions for an event that can last for hours and move around a lot. That's a lot of work for such a small feature, but it is information that you will struggle to find easily elsewhere.

For WorldTour races, there is also a paragraph or two of supporting text – and a route profile is included. Again, it is a lot of work for so little information, as every race organiser uses a different horizontal and vertical scale – so each profile was re-worked to a standard set of parameters. 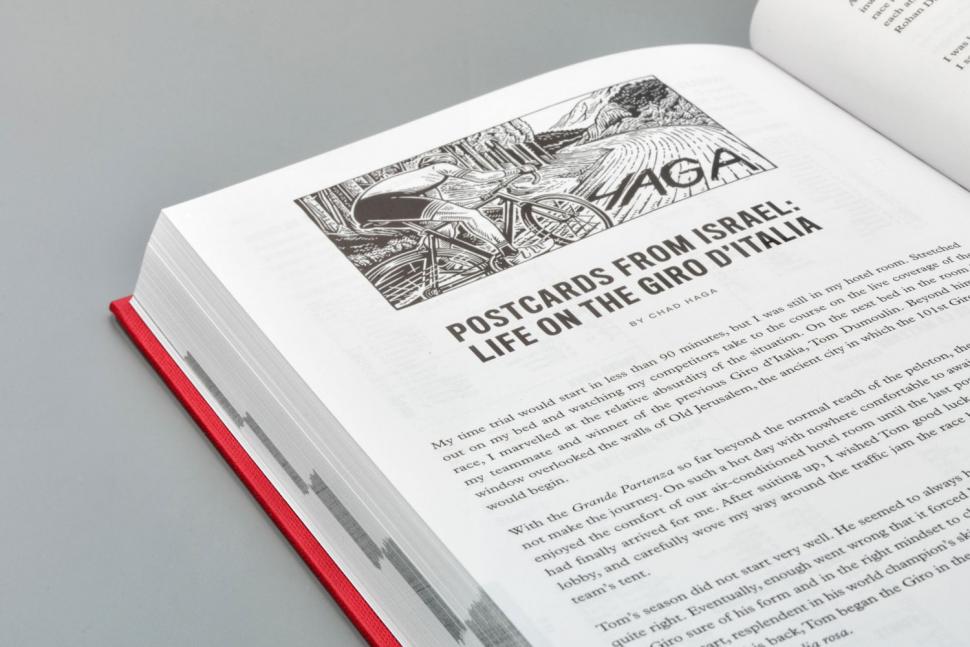 As if his task was not hard enough already, Kelly also wanted to include information on the riders involved in the main breakaways of WorldTour events. Not only is there a subjective judgement as to what counts as a break, but you need to capture the names of all the riders involved.

Kelly managed to partly automate the data collection by writing a program that trawled through race reports and pulled out riders' names, but that still had to be checked manually. Other sources include official Twitter feeds, and if all else failed he would watch television coverage.

The information steps up another level for Grand Tours, Monuments, and World Championships, with every finisher listed for each day's racing.

There is a complete listing of past winners for key races, which of course opens up a whole new area for debate: for example, the decision was taken to put an asterisk beside Lance Armstrong's name for his seven 'non-wins' in the Tour de France, and leave him out of the rankings for overall victory. However, his results do contribute to the analysis of which race number 'has been on the back of most Tour de France winners': the answer is 1 by a long way, which is normally the defending champion, and not 51 as is often thought – and Armstrong's removal wouldn't change the result.

Kelly also analyses some of his statistics, and discovers that 'only 59 riders raced a Grand Tour for the first time in 2018, the lowest – significantly so – in the past 30 years'. He attributes this to the reduced team sizes, which means that every rider chosen needs to be a proven performer.

That is already a lot of statistics – but it is not all of them, with senior National Championship results from across the world and British race results also included. Other information includes team listings (with commentary) and obituaries.

A worthwhile almanack needs to provide more than just facts and figures, which The Road Book does. A panel of former riders and other worthies formed a judging panel for the initial 'Rider of the year' awards: Geraint Thomas and Anna van der Breggen were their overall winners, although they 'only' finished 4th and 3rd respectively in the UCI WorldTour rankings – which are also listed in full. Other winners were Egan Bernal and Laura Stigger as young winners, and Julian Alaphilippe and Amanda Spratt as 'combative' winners – which are all sound choices.

They invited 'a curator to present the images that illustrate some of the key stories of the previous season on the road', and the first selection (of 31 colour pictures) come from Rouleur magazine. 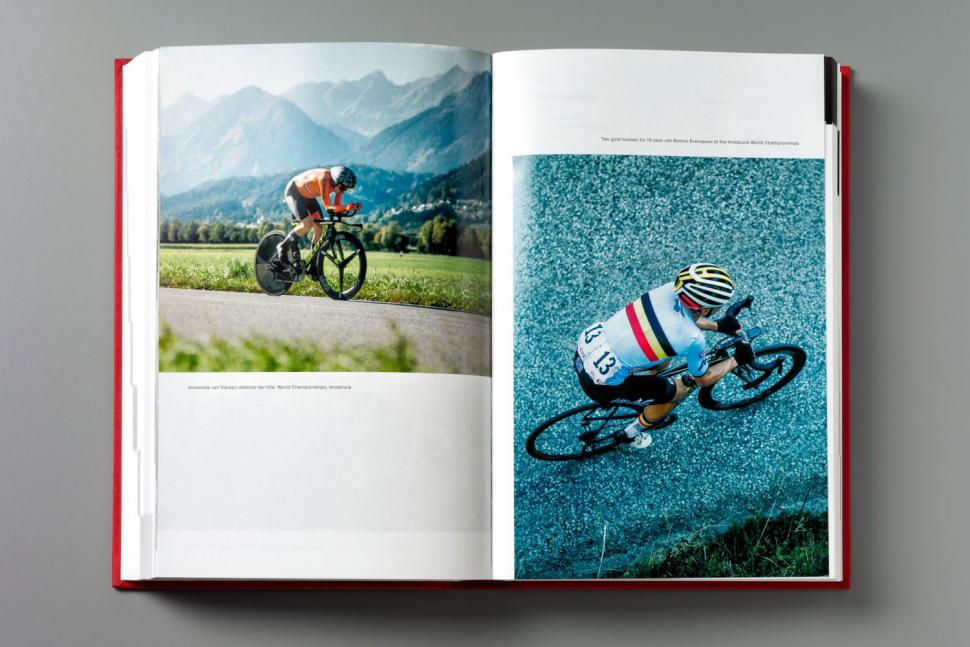 Editor Ned Boulting has used his extensive list of contacts to come up with six writers to contribute 'long-form' essays, which would be right at home in the finest cycling magazines. Some are well known for their writing, others less so – but who better to talk about whether Marianne Vos is past her peak than Marianne herself (albeit with some help)? Although she says 'I don't think I will win another rainbow jersey', that might just be a ruse to deceive her rivals because 'that is not to say I won't be working very hard to become world champion again'.

There are shorter contributions from Chris Froome, who describes the moment when he knew that he had won this year's Giro d'Italia, and Geraint Thomas, who does the same for his Tour de France win.

I have every confidence in Kelly and his sources, but with a proof-reading task of this magnitude there could be some mistakes, and if so the plan is to provide updates on the website – and then print a summary of any corrections in the next edition of the book.

Do you need such a book? For most people the answer is of course 'no'. Do you want such a book? It may be irrational, but for some the answer will always be 'yes'. I suspect that books like this are appreciated even more as time passes; to put it another way, I would welcome the chance to have Road Books that covered the years when I first became interested in the sport.

The print run of 3,000 pieces will determine the maximum number of complete sets available in future years – and you might want to be part of that select group. For comparison, Wisden produces well over 50,000 copies per year, with rare editions costing as much as a decent car, and complete sets cost as much as a decent house! Obviously, given that Wisden started 155 years ago, The Road Book has a long way to go to achieve the same status, but it has to start somewhere.

From The Road Book:

The world's most compelling sport finally gets the chronicle it deserves. The Road Book is a landmark publication, containing a comprehensive review of the year's racing, from the first World Tour race of the year (the Tour Down Under) to the last (the Tour of Guangxi).

The three Grand Tours, five Monuments and the World Championships all receive lavish attention, across one thousand original pages of reports and statistics, as do the UCI Women's World Tour events. Other major races are also covered with an impressive array of data.

This was an extraordinary year. But in that regard, it was quite normal...

In his introduction, Editor Ned Boulting addresses the key issues facing this 'beautiful and chaotic, captivating and maddening, thrilling and stultifying' sport, and there is a wealth of exclusive essays from the cream of cycling writing:

* Chad Haga on his Giro d'Italia

* Harry Pearson on the mystery of Niki Terpstra

* Tom Southam on the life of a directeur sportif.

Both a thrilling reminder of the crucial moments of the season just gone (just where was it that Simon Yates cracked? And who did Van Vleuten beat on the line?) and an indispensable companion to the season to come (which comes first: the Poggio or Cipressa?), The Road Book will enhance every serious fan's enjoyment of the sport.

Although £50 is a lot of money, it gets you a lot of book

That it now exists.

That it has not existed before.

Would you recommend the product to a friend? Yes, subject to knowing his or her interests.

It would be trite to call this best-in-class, because there is nothing else quite like it – but it does its job well and I think that it would be hard for anyone to improve on it. Educational and entertaining guides for cyclists, with Rapha's production values Where There’s A Will by Emily Chappell

Beautifully written and thought-provoking journey through the peaks and valleys of ultra-racing, woven together by the realities of life, love and friendship