The Gemini Atlas 500 is an StVZO certified unit that offers a usable amount of light on the road without blinding other road users. It's also simple to operate, lightweight and compact, and the ambient light sensor is a useful bonus. The run-time isn't quite as long as stated, but it's still impressive.

It's fair to say many front lights on sale today are too bright to be used on the road without blinding other road users. We've all been there – blinded by the lights and seeing stars for seconds later. StVZO-certified lights – those that comply with German safety standard for bike lights – are designed to prevent this from happening, by cutting off the light that could dazzle oncoming riders and drivers.

Oddly, only a handful of manufacturers offer StVZO-certified lights – Cateye and Lezyne, to name but a couple – and even then they only make up a few in the range. Thankfully, here's another, courtesy of Gemini Lights. It's the only StVZO light in its range and is designed to offer up to 500 lumens of road-focused lighting, without searing the retinas of oncoming cyclists or drivers.

The unit is small, given the reasonable power output, and at 86g it's pretty light too – you could happily use this even on your Sunday best bike without feeling like you're incurring much of a weight penalty. It feels very sturdy, too. It's a straightforward but smart looking light, with a soft-touch feel to the poly carbon composite exterior.

The mount is a classic silicone band which you simply stretch and hook over to attach to your handlebar (the Atlas is compatible with 22.2-31.8mm diameter bars), and the light unit can be removed while the mount is in place, making for easy charging. 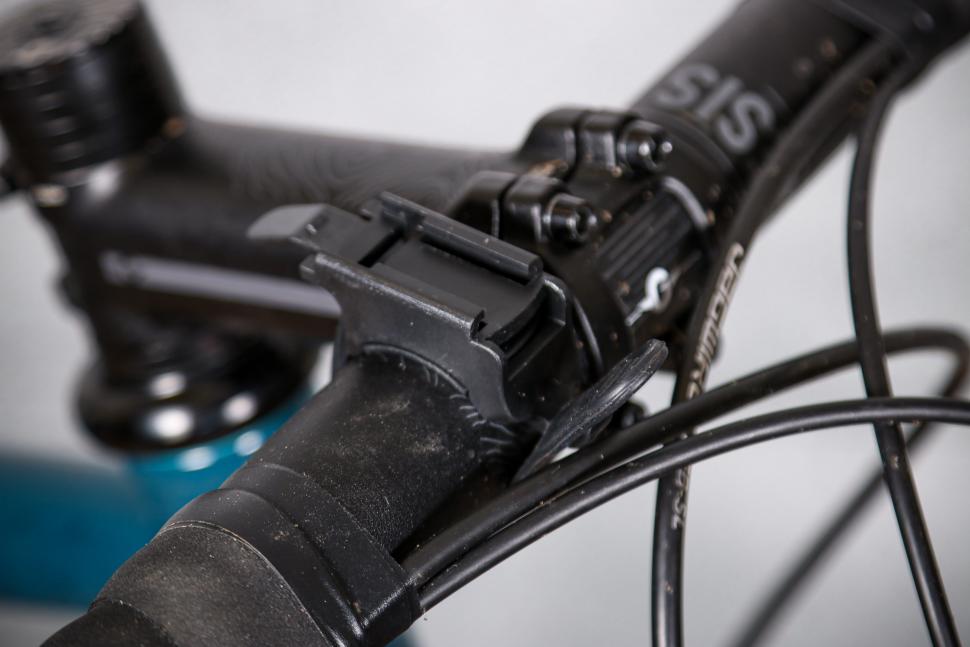 Gemini doesn't claim any kind of waterproofing for the light, but I encountered zero issues even in heavy rain – I checked to make sure the silicone cover wasn't hiding any moisture underneath, as sometimes this can be an issue that affects the longevity of a light.

One of the best aspects of the Atlas 500 is its simplicity and intuitiveness. There's one button on top of the unit for controlling the light output – press this once (easy with a winter glove on, too) to turn it on, and keep pressing it to cycle through the modes, holding down to turn it off. One point deducted for not having a memory mode when turned back on, though. 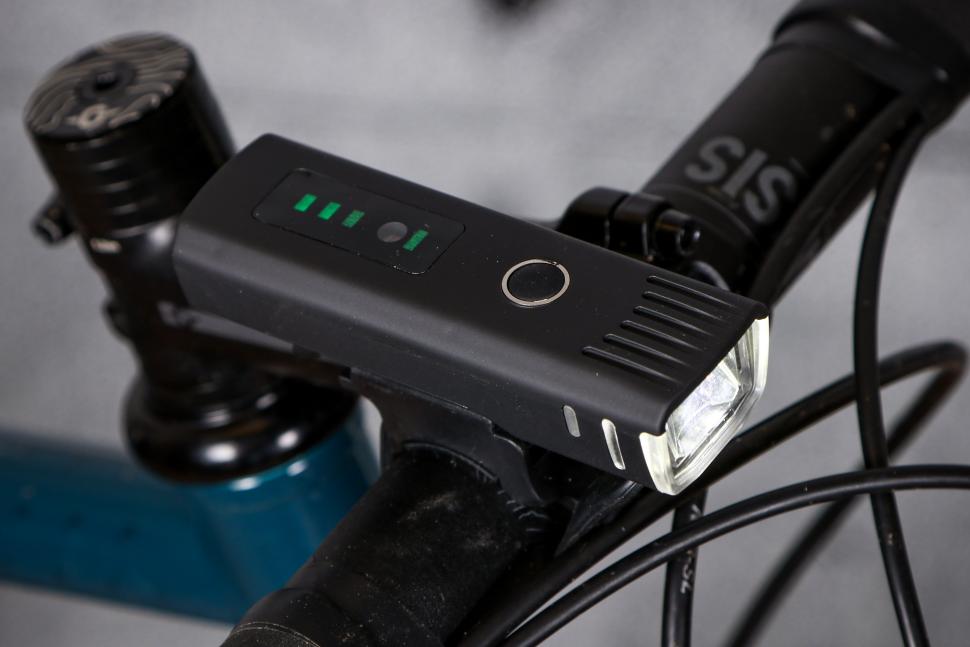 Three green lights indicate the battery capacity (three being full), while a blue light indicates the light is in the ambient lighting mode (more on that in a second).

The ambient mode is a neat feature – a small sensor located on the top detects the current light conditions and automatically adjusts the lighting mode to suit. So if it's dark, the light will change to its brightest mode, but if there are bright street lights around, it will drop to the lower power 250 lumens mode, while if it's daylight, the light will turn off altogether.

It's a neat feature, but I'm not convinced by its effectiveness. First, though I could test the light to see if it adjusted the level of brightness in my garage by turning the lights on and off, on the road I didn't notice it working; that's not to say it wasn't working – I just couldn't tell while riding.

Then there's the issue of the light not activating in daylight. I imagine most people, like myself, tend to use a flashing light during the day (especially if it's sunny), so it's a shame it doesn't go into the flashing mode in bright light.

That said, the flashing mode is more of a strobe setting which I'm not a massive fan of – I'd much rather have seen a less offensive conventional flashing mode.

Even though the Atlas 500 is sporting 'just' 500 lumens, because it's StVZO certified the available light output is used appropriately without wastage, ensuring it's used where it's needed – on the road ahead, and not in someone's eyes. 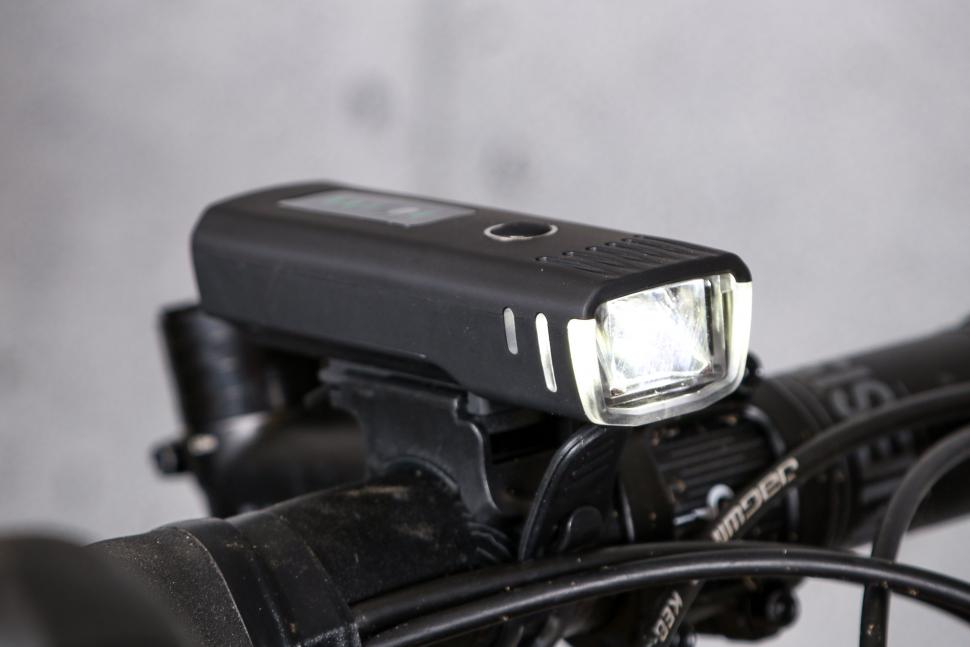 Comparing it to the built-in front light on my ebike, which is StVZO-certified, 400 lumens, and produces a very distinctive beam pattern with a sharp cutoff in front and at the sides, the Atlas 500 definitely has a more widely spread beam pattern, with more light focused on the surrounding area rather than a focused beam directly in front.

Thankfully, once the unit is in place and aiming at the right level, the mount is rock solid – even over tree roots on paths, the light didn't budget at all.

At its highest 500 lumens setting, the Atlas 500 isn't quite bright enough to make those dark lanes or unlit paths feel like riding in the daytime, but it's certainly enough to pick out details in front of you and to the sides to ride confidently, even when you're covering ground quickly.

Handily, the Atlas 500 also features two cutouts on each side of the unit, giving it enhanced side visibility, which is useful on the road.

Gemini says the Atlas 500's 12Wh battery is good for up to 7 hours of use in the 250-lumen steady mode, 5 hours in flashing mode, and 3 hours in the most powerful mode. In the real world the light clocked up 5 hours 30 minutes, 4 hours 38 minutes and 2 hours 10 minutes, respectively. That's not quite in line with factory figures, but the time is still pretty impressive nonetheless. Charging the unit from flat takes just 1 hour 45 minutes.

Compared with some front lights with a similar output, such as the Lezyne Classic Drive 500 that Stef Marazzi reviewed a couple of weeks ago, the Gemini fares well in terms of run-times and charging. The Lezyne takes 3 hours to charge and its 500-lumen mode is good for 1 hour 30 minutes, though it did score better with its 11-hour flashing mode – but the Gemini is another £10 at rrp. (Gemini's website quotes the Atlas 500 as £31.99, but then you'd have to pay import taxes on top.)

For me, despite the higher price, the StVZO certification clinches it – I'd recommend it over any similarly priced 500-lumen lights for that reason alone. After all – we all want better quality lighting over brighter lighting, right? Mind you, though it's not StVZO-certified, the Ravemen LR500S offers anti-glare lighting and great run-times, and costs £15 less.

Overall, the StVZO certification gives the Atlas 500 an advantage for road cyclists, while its ease of use, low weight and simplicity in mounting make it an essential front lighting option in my book. The ambient lighting is a neat feature, though if it's not for you the manual mode works just fine. It's very good, but just a bit expensive compared with the competition.

Gemini Lights says, "A pocket-sized road light that packs a sizeable punch. An impressive 500 lumens of power, fine-tuned for road use with a vertical cutoff beam. The StVZO beam prevents glare to oncoming motorists, keeping you and other safe.

"The Atlas 500 Road weighs just 80g with an integrated USB rechargeable battery that can last a whole night."

With a one year warranty, rest assured that we've got you covered.

Very easy to use – one button to change modes and only four modes to choose from. The button is easy to use even with gloves on.

Easy to use and a solid fit – the light didn't budge, even when riding over bumps at speed.

No waterproofing claims, but the light is able to withstand heavy rain without water ingress.

Light output is very good considering the modest 500 lumens, clearly lighting the front and sides without blinding other road users.

A couple of scratches on the battery level panel (which was my fault for dropping it on a concrete floor!), but otherwise looking good after a month of solid use.

Quite lightweight given its decent output.

At £49.99 it's pricier than the competition we've reviewed on road.cc recently, though it does have StVZO certification, and run-times are longer than some... It is cheaper than some, though, such as the BBB Strike 500.

A good amount of light on unlit lanes and paths, lighting in front and to the sides without obviously blinding other road users (and I never had anyone flashing me to tell me otherwise).

Knowing that even in the highest mode, 500 lumens, the light is going to be focused on the road. It might not be a huge power output, but the Atlas 500 uses all available lighting.

It's a bit pricey. Its closest match in performance terms is the Ravemen LR500S, which offers a similar type of light with anti-glare tech and also good run-times but is £15 cheaper at rrp. It's a tenner more than both the Lezyne Classic Drive 500, which is heavier and the run-time at 500 lumens isn't as good, and the Vel 500, which is lighter, but the 500 lumen run-time pales in comparison. You can spend more though: the BBB Strike 500 is £54.95.

A very capable front light that gives you quality lighting without blinding other road users. That it's also compact, light and easy to use, with great run-times, makes it a very good option – if a bit on the pricey side. 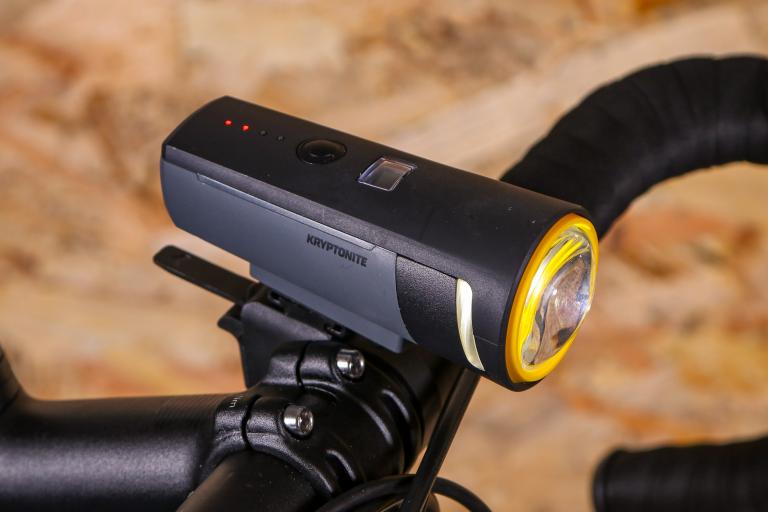