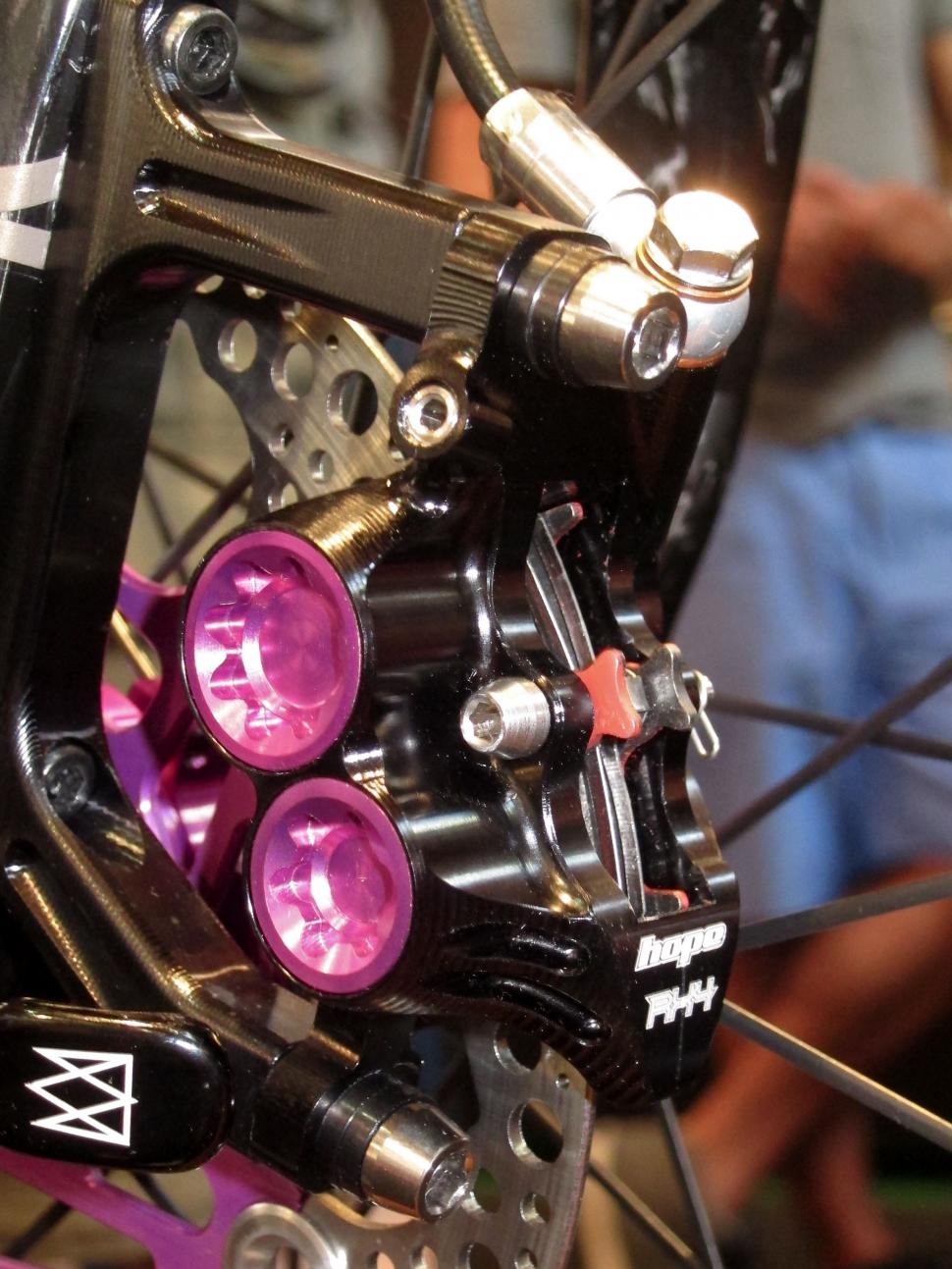 Hope have 30 years experience in bicycle disc brake manufacturing and despite concentrating on the mountainbike side of things have tarmac form in their V-Twin hydraulic brake converter that allowed the use of their hydraulic callipers with a standard cable-pull road lever before hydraulic road discs became a common or garden shed thing. With the growing number of bikes being supplied with full hydraulic systems the function of their calipers wasn’t always up to the standard expected by discerning customers, or Hope, it would seem. 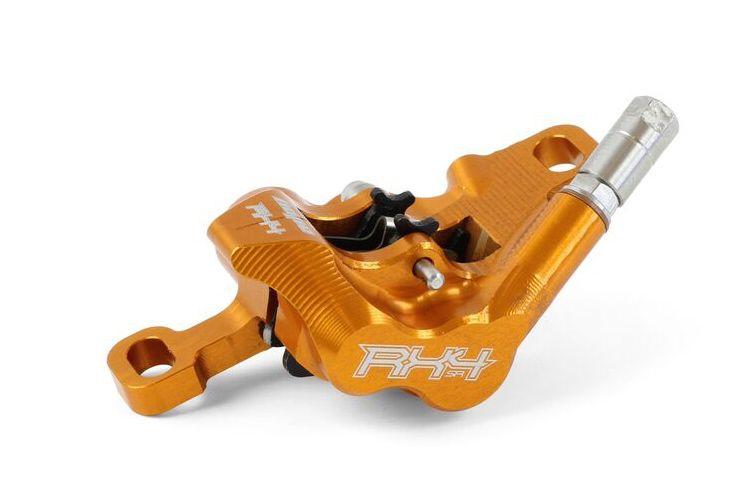 To answer this Hope have come up with the road and CX specific RX4 hydraulic 4 piston calipers that can be retro fitted to either Shimano or SRAM hydraulic brake systems and offer increased piston retraction, which In turn gives less chance of the dreaded disc drag and annoying disc rub. 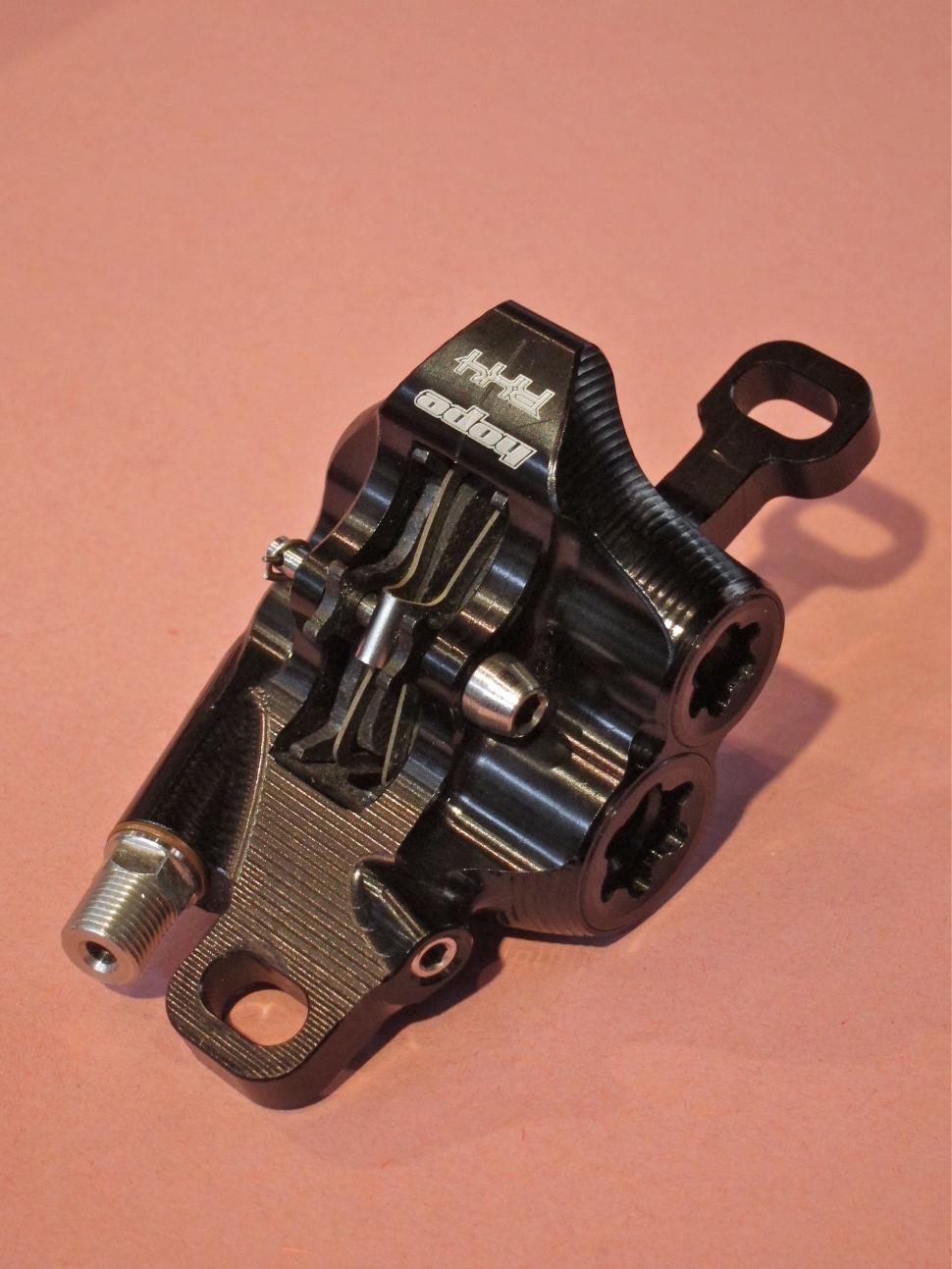 The design of the industry first RX4 calipers allows pressure to be spread over the 2 smaller pistons each side of the caliper which allows for a larger pad, offering greater pad to disc contact which increases brake friction and results in better brake feel and modulation at the lever. As does the lightweight one piece design which has increased resistance to flex over a 2-piece design and therefore no loss of brake-feel. There is less brake deflection due to a larger spread of clamping force across the caliper body, and a larger pad will also help dump heat quicker than a small pad, a factor more important for road applications where some people are likely to drag their brakes. Don’t drag your brakes folks. 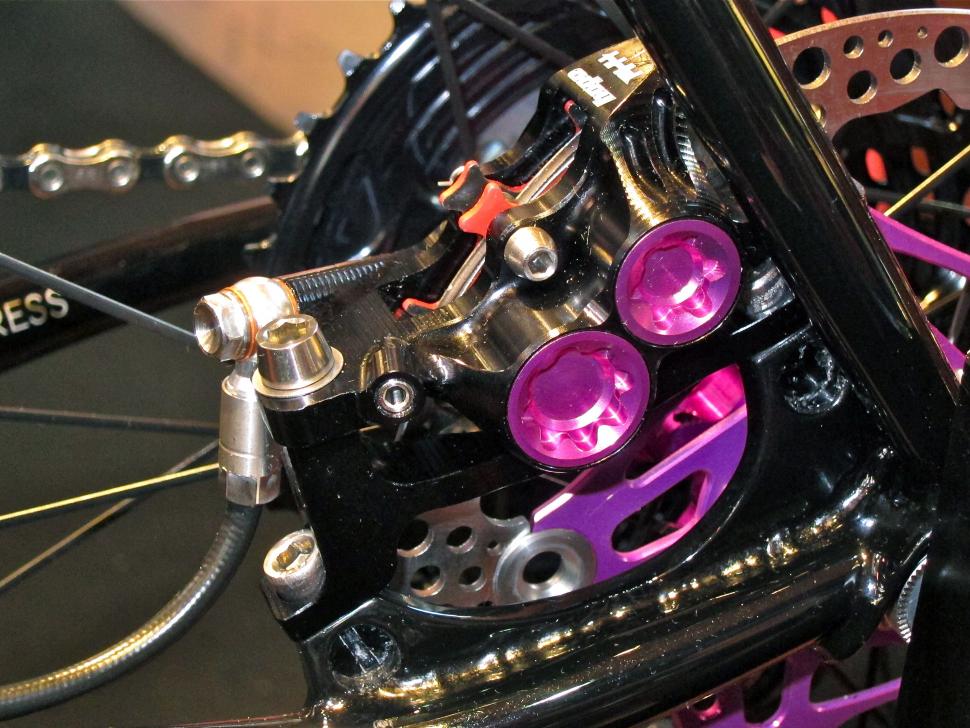 The RX4 comes in two different caliper variants, designed to work alongside either Shimano or SRAM levers using mineral oil or DOT fluid respectively. You can use your existing brake hose, or a Hope hose with SRAM/Shimano lever inserts and Hope caliper inserts. 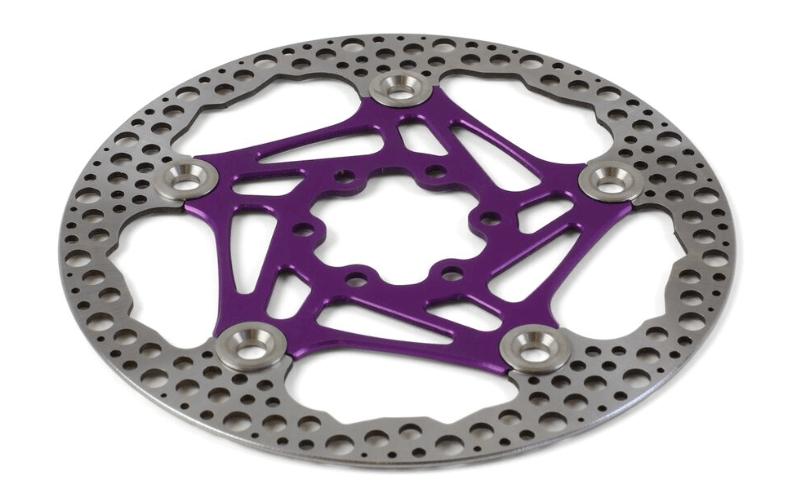 To go with the calipers Hope have engineered their disc rotors to be safer following concerns about crashes in the peloton. Although Hope feel that there isn't really a safety issue, unlike the UCI, they have developed a new disc rotor that’s first cut oversized and then chamfered to create a rounded edge which is smooth to the touch. It’s an extra manufacturing process which will be offered as an option alongside their standard discs, the new round floating rotors are available in 160mm and Hopes usual six colours. 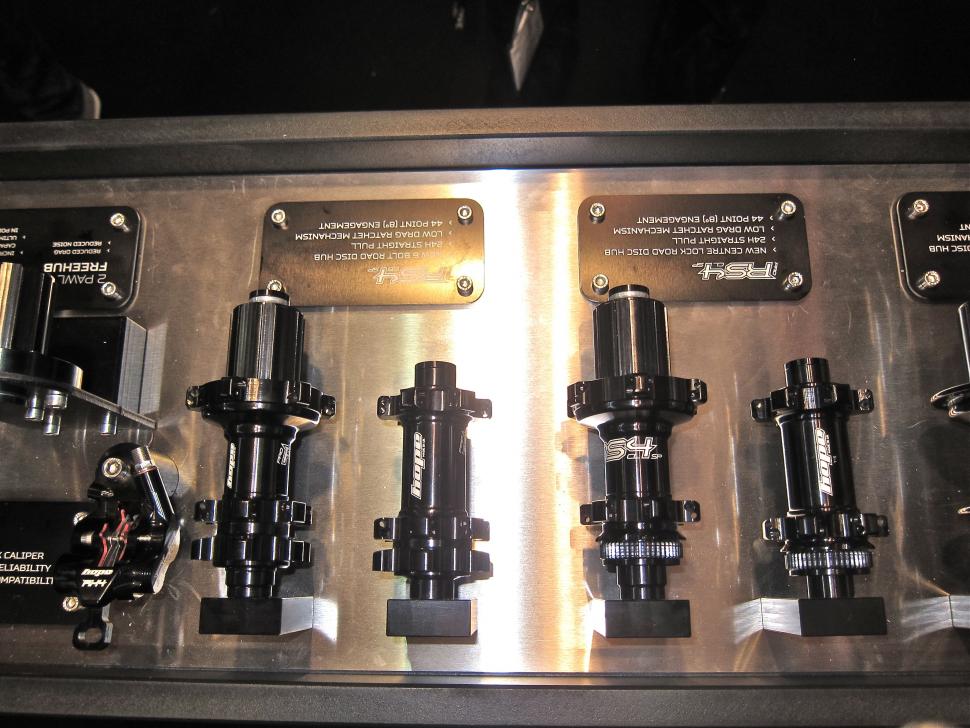 Hope were also showing off their new RS4 road hubs. Like hydraulic brakes Hope have been manufacturing hubs for ‘a while’ now and while they have transferred their MTB knowledge across to their road hubs in the past the RS4s are different as they’ve been conceived as a road/cyclocross hub right from the start. The RS4s still maintain Hopes legendary reliability and serviceability but by using a two pawl ratchet mechanism the boys from Barnoldswick have created a drive with significantly less drag and as a result, a quieter freehub. 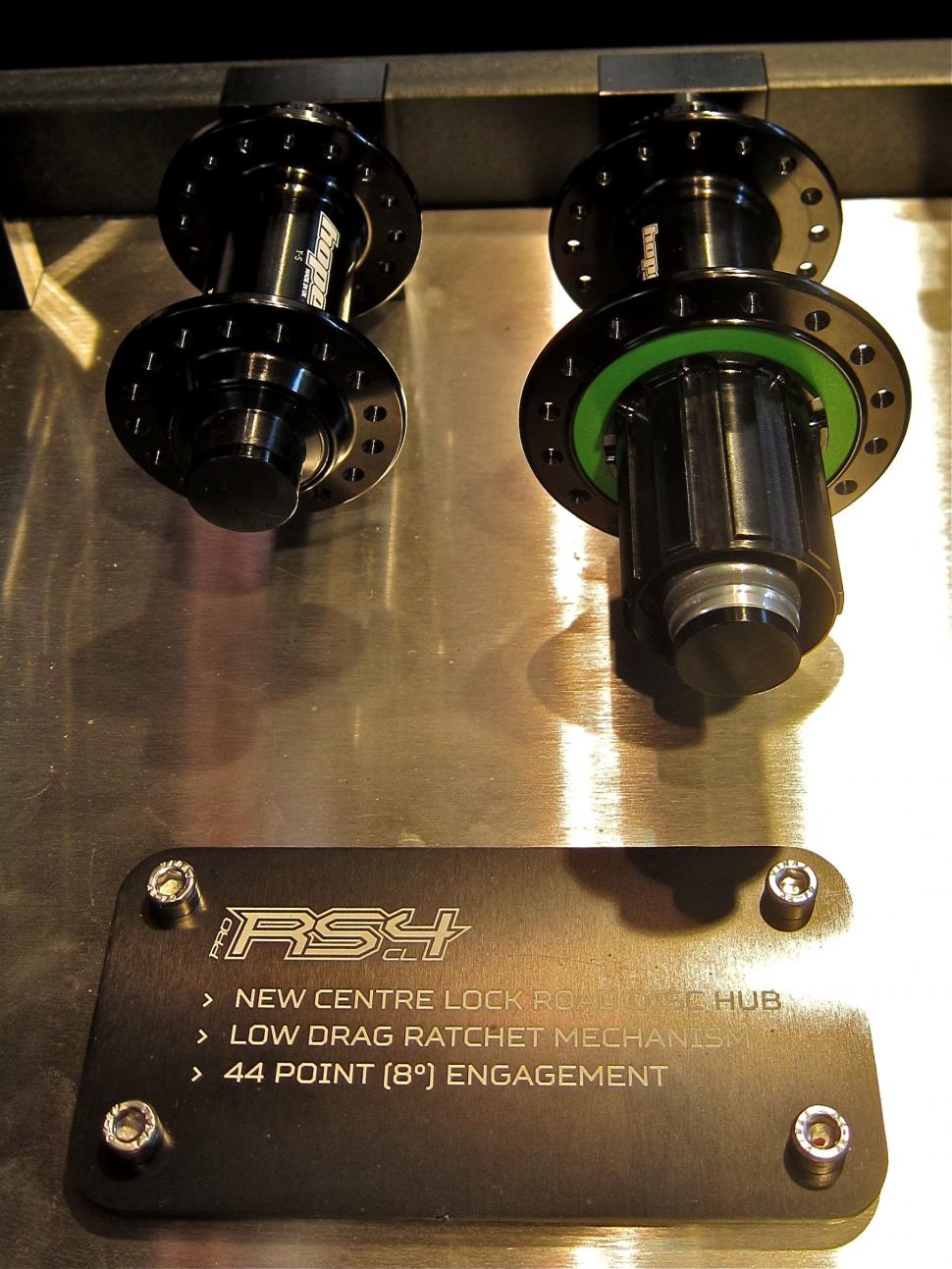 The RS4 sees the production of the first centre-lock hubs from Hope, although if you’re a tech geek you’ll that these are not their first splined disc fitting hubs. Hope's initial disc brakes back in the early '90s were all mounted on splined hubs, although using a different profile to today’s standard. 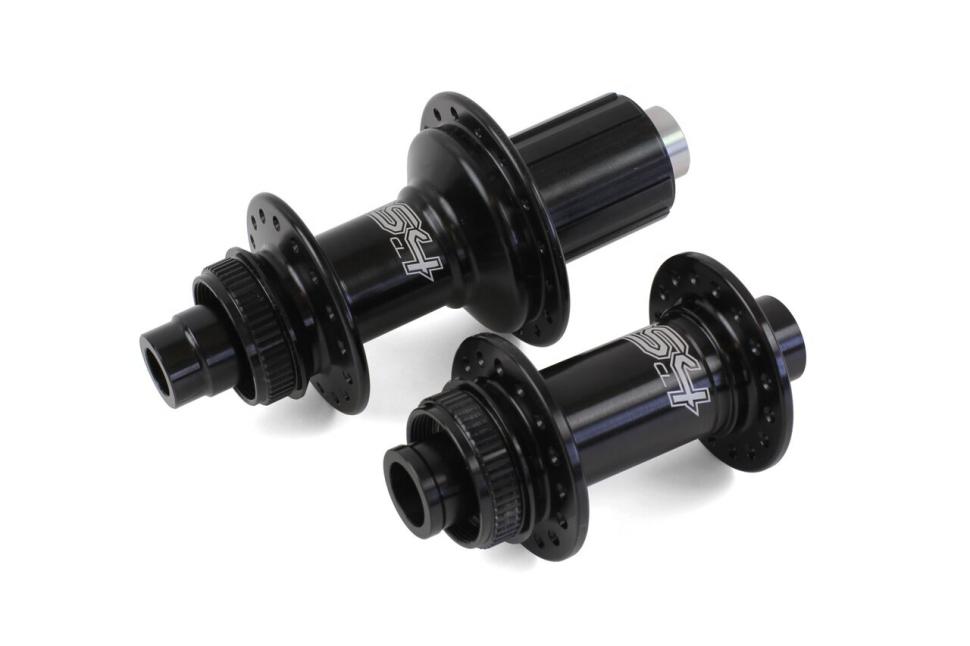 The RS4 disc hubs are available non-disc or with centre-lock or 6-bolt disc fixings, and end-cap kits to switch between QR, 10mm/12mm/15mm thru-axles, as well as 135mm and 142mm widths. The hubs come with a 44 point freewheel engagement, sealed stainless steel cartridge bearings and are Shimano 9/10/11 speed and Campag compatible. The RS4 non disc hub comes in 20/24/28/32/36H spoked versions for the rear and 16/18/20/24/28/32/36 spoke count fronts, 24/28/32h conventional flange centre lock disc hub spoke choices, while the straight pull hub has a 24 only spoke count. All hubs are available in Hope’s six anodised colours. You can see all our Eurobike 2016 coverage right here, and there is lots more to come