First look at the all-new 2018 Cannondale Synapse, which gets lighter, stiffer, disc brakes and 32mm tyres
by David Arthur @davearthur

First introduced in 2006, Cannondale’s Synapse has been a hugely popular bike with UK cyclists, it even won road.cc's bike of the year award in 2015, and for 2018 there's an all-new Synapse. To create the new bike Cannondale has built on the solid foundations of the previous version but finessed every detail to create arguably a bike that better meets the need of today’s endurance/sportive cyclist.

The new Synapse aims to provide better ride comfort with more speed and performance. While it retains a similar aesthetic to the previous model, the new Synapse is built entirely around disc brakes, is lighter with a frame weighing a claimed 950g for a size 56cm, accommodates 32mm (measured) tyres, has mudguard eyelets and a new integrated handlebar that boosts front end comfort. It's a case of evolution rather than revolution. 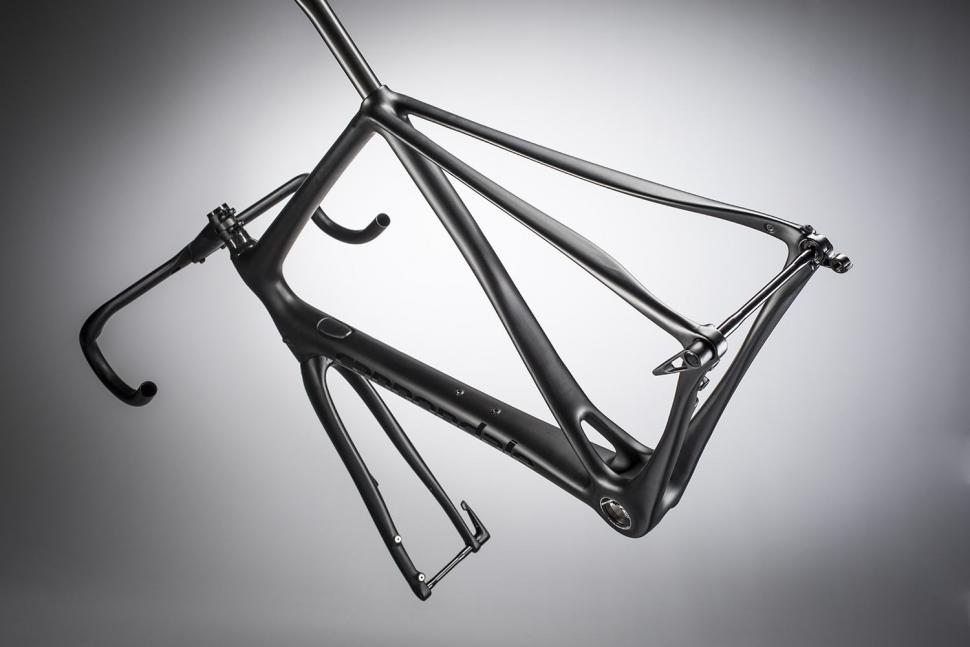 Synapse goes on a diet and gets stiffer

A primary goal for the new Synapse was to create a faster and higher performance bike for the rider who doesn’t want to sacrifice speed for comfort.

“For those who think that to get the all-day capabilities of an endurance machine you have to give up the go, we say think again. The all-new Synapse is built to go hard, longer,” explains Cannondale.

So it has focused its attention on reducing the frame and fork weight, increasing stiffness and introducing an asymmetric and size-optimised design approach wrapped up with the tried and tested geometry of the previous Synapse.

The previous Synapse could hardly be described as a heavy bike, but Cannondale has taken a scalpel to the new bike and shaved away loads of weight. It’s claiming an impressive 220g weight reduction for the frame, resulting in 950g frame a 56cm. That’s for the Hi-Mod version - the slightly more affordable regular carbon Synapse does without the high-modulus carbon. The fork is down by 116g, coming in at 367g.

Cannondale tells us the 950g frame weight makes it one of the lightest in its class. It’s certainly up there with the lightest though the Focus Paralane comes in at 907g with a similarly featured frame.  With no paint the frame actually weighs 918g, dropping down to 841g for a size 44cm and rising to 1,053g for a size 61g.

Stiffness has been increased. Cannondale tells us the 9.4% increase narrows the stiffness gap between the Synapse and SuperSix Evo more than ever before. With its size-specific frame development, the head tube stiffness increases as you go up the size range.

Much of the weight and stiffness improvements have come about as a result of the asymmetric design of the new frame, intended to better manage the different loads from rider input and the disc brake forces.

The two halves of the rear triangle are totally different. The non-driveside chainstay is 18% larger in key areas compared to its opposite number, and the seat tube and downtube are asymmetrically offset around the 73mm wide BB30a bottom bracket. The fork also has a bigger left leg and directional carbon layup to resist flexing under heavy braking.

Cannondale has used a size-specific approach to the new Synapse, something it first used on the SuperSix Evo, and is intended to offer the same handling traits regardless of the frame size.  It optimises both the carbon layup and tube dimensions on each frame size, tailoring the stiffness for each size. 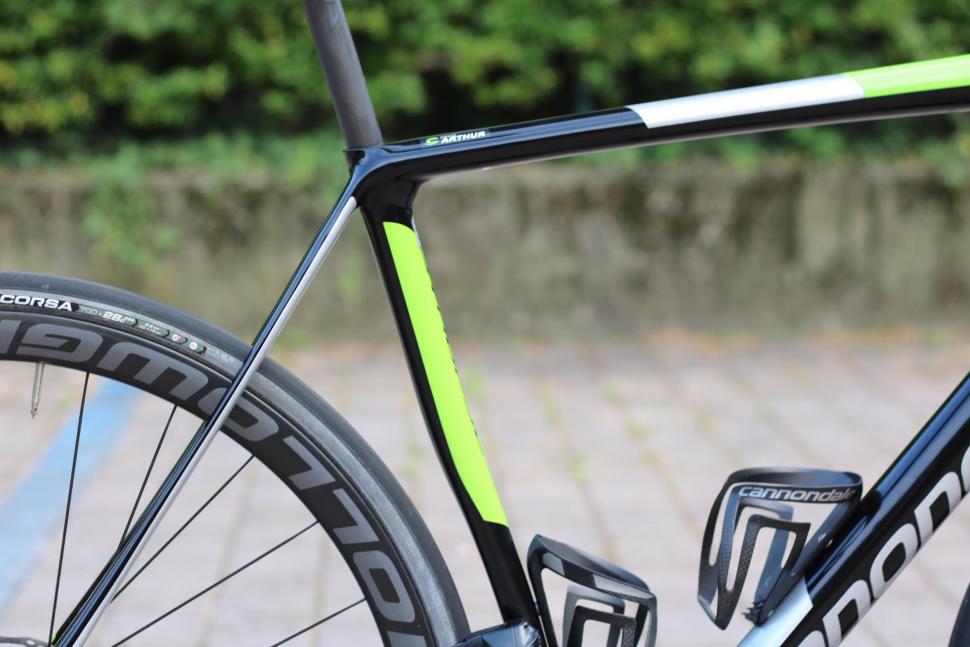 But Cannondale takes it a step further and has developed three forks with different offsets and headset bearing diameters. The smaller frame sizes have a shorter offset, the larger frame sizes a bigger offset, to produce the desired handling traits across the size range.

What the heck is offset and why is it important?

We should probably explain what offset is. The offset is simply how far ahead the front axle is offset from the steering axis. Changing the offset affects the trail of the bike, and it’s trail that influences the handling. 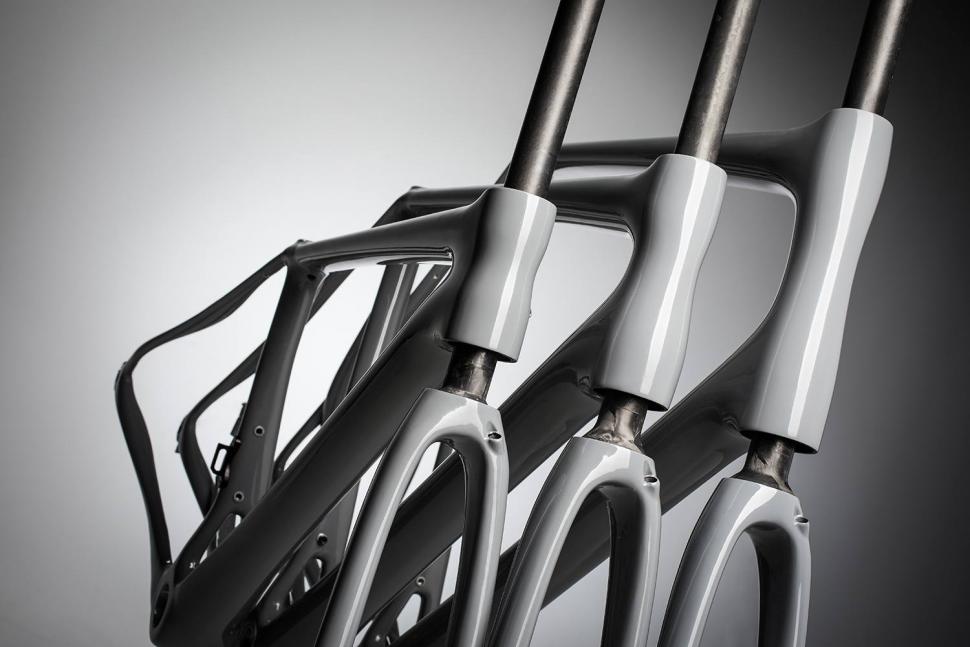 If you draw an imaginary line through the centre of the head tube to where it hits the road, and another vertical line from the fork axle to where the tyre contacts the road, the distance between the two lines is the trail. The smaller the offset the longer the trail, and generally longer trail leads to slower handling, or more relaxed, handling.

Disc brake haters look away now, the new Synapse is only available with disc brakes. That follows the current trend in the endurance road bike category, with other manufacturers making the same wholesale switch to disc brakes on bikes that are designed to meet the demands of non-racing cyclists riding for fun and tackling long distances in all weathers and road conditions. 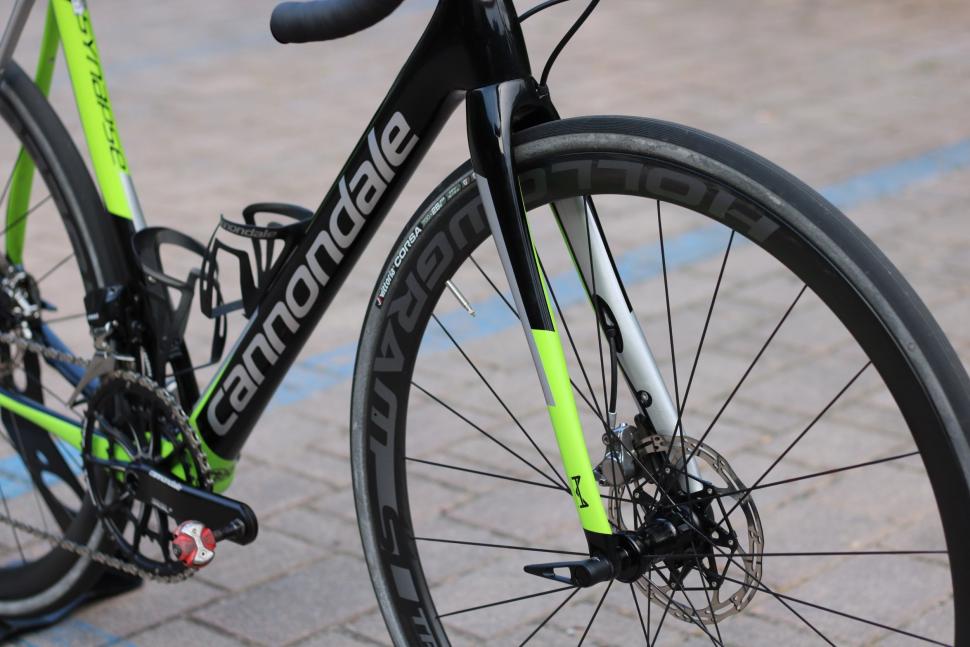 Disc brake standards have seemingly settled down now, and so the Synapse uses 12mm thru-axles front and rear with flat mount calipers across the entire range.

The Synapse is all about providing a comfortable ride, whether it’s for the Cannondale-Drapac team to do battle on the pave of Paris-Roubaix (where the new bike first made its public outing) or cyclists tackling long rides on a variety of road surfaces, generally from rough to rougher around my part of the world.

SAVE micro-suspension technology has been a key feature of the Synapse throughout its history, and it’s something Cannondale has refined in the search for extra compliance to soak up the vibrations and impacts generated when riding along a bumpy road. 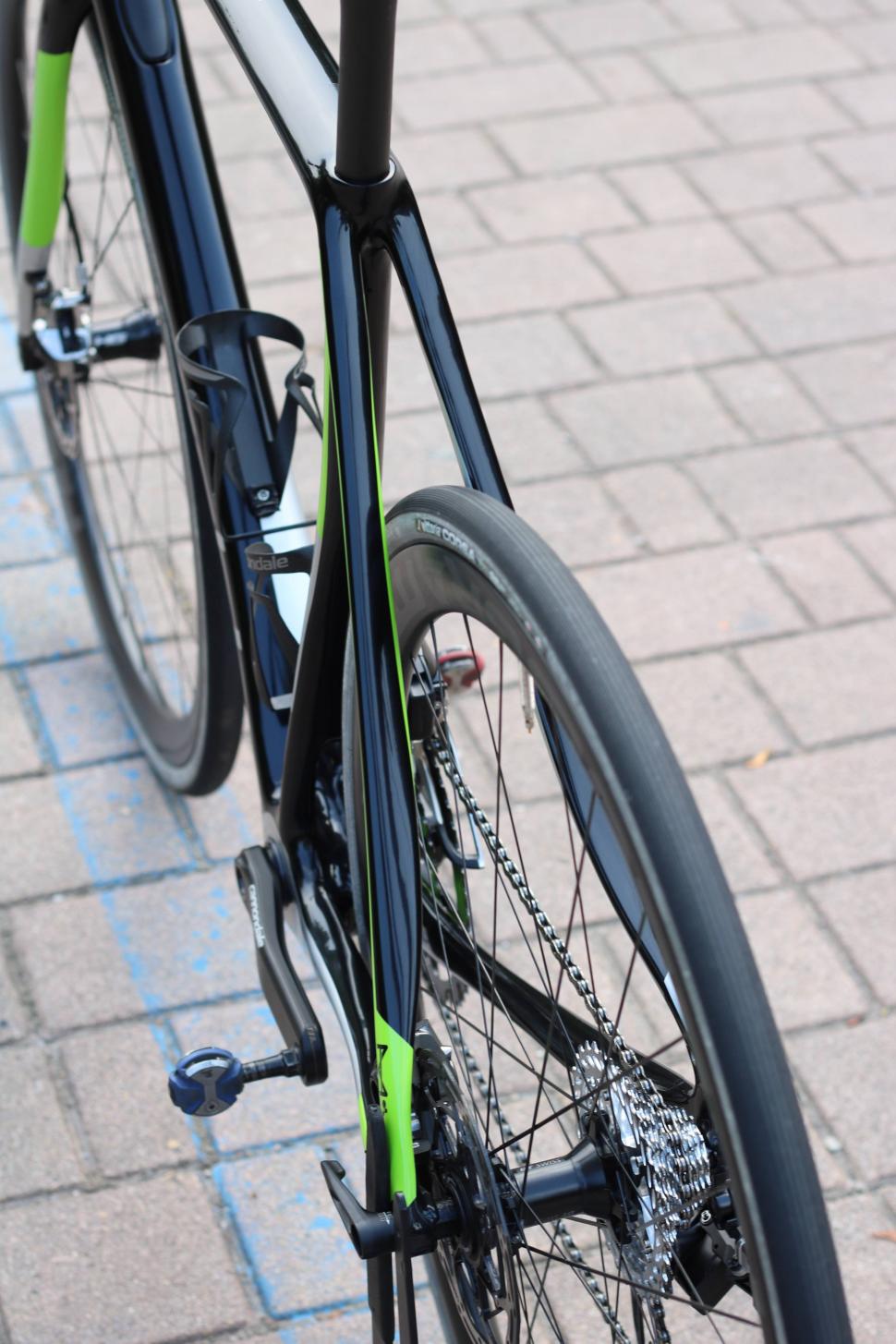 SAVE boils down to a series of flex zones built into the frame and fork, and really is the heart and soul of the Synapse. It’s about precise tube shaping and carbon layup that allows the tube to deflect and absorb shock without unwanted flex or twist.

Found in the chainstays, seatstays and fork legs, and now also in the new Systembar and seatpost, SAVE has been refined on the new Synapse. Cannondale has sought to retain the comfort whilst boosting the stiffness in key areas to provide a higher mix of performance.

Cannondale resisted going down the road of adding actual suspension or moveable parts as in the new Specialized with its Future Shock or Trek’s IsoSpeed decoupler.

One of the key developments for the new Synapse is a new two-piece integrated handlebar, called the SAVE Systembar. Cannondale wanted to provide more front end compliance, and after finding nothing suitable on the market, it began developing its own solution

The result is a handlebar with an elliptical profile (similar to the chainstays) with the same circumference as a round bar, that plugs seamlessly into a separate stem.  It provides in the region of 4-6mm of deflection, a lot more than a regular handlebar. Cannondale even let on that under extreme testing it produced up to 15mm of deflection. Wow! 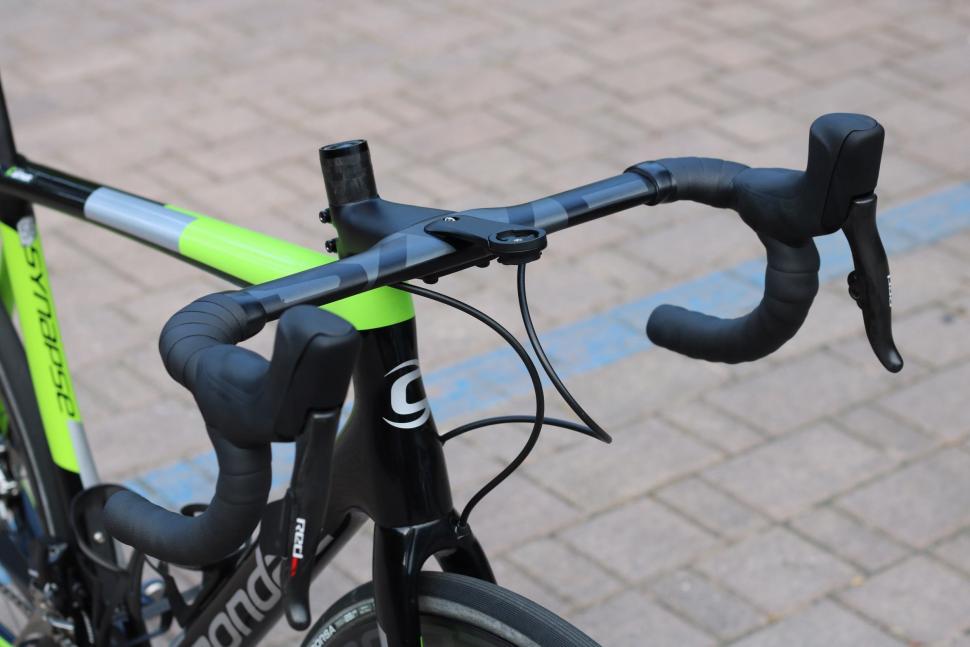 “The SystemBar’s ergonomic and elliptical SAVE bar shape feels great in the hands and provides riders more deflection than a standard bar. The SystemBar works with the rest of the bike’s SAVE features to really smooth the ride and increase control,” said David Devine, Cannondale Senior Product Manager, Road.

It offers the appearance of an integrated bar but offers a full range of fit adjustment. Stems range from 80-130mm with -6° negative rise, and 70-110mm with +6° rise, and with 8° of pitch adjustment, the rotation of the handlebar. That means you can really dial in the fit of the Synapse as easily, more or less, a regular stem and handlebar setup. 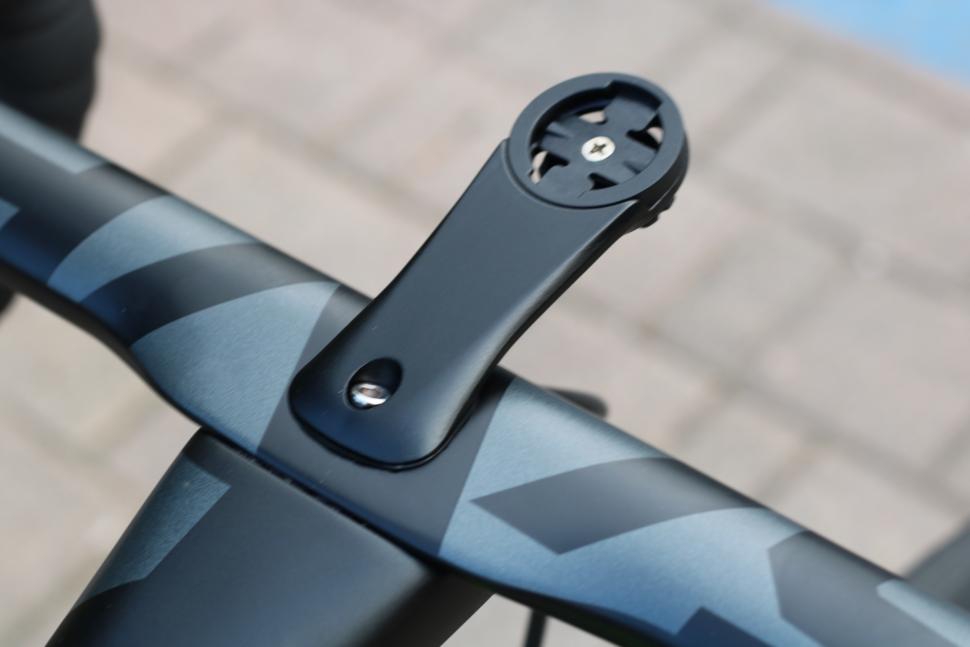 To enable the easy fitting of Garmin computers and lights, Cannondale has also developed a special mount. There’s even a neat new Fabric light that has a Garmin mount built into the top, so you can light up and navigate while still keeping the handlebar area clean and uncluttered.

The Systembar will be included on six bikes in the Synapse range. 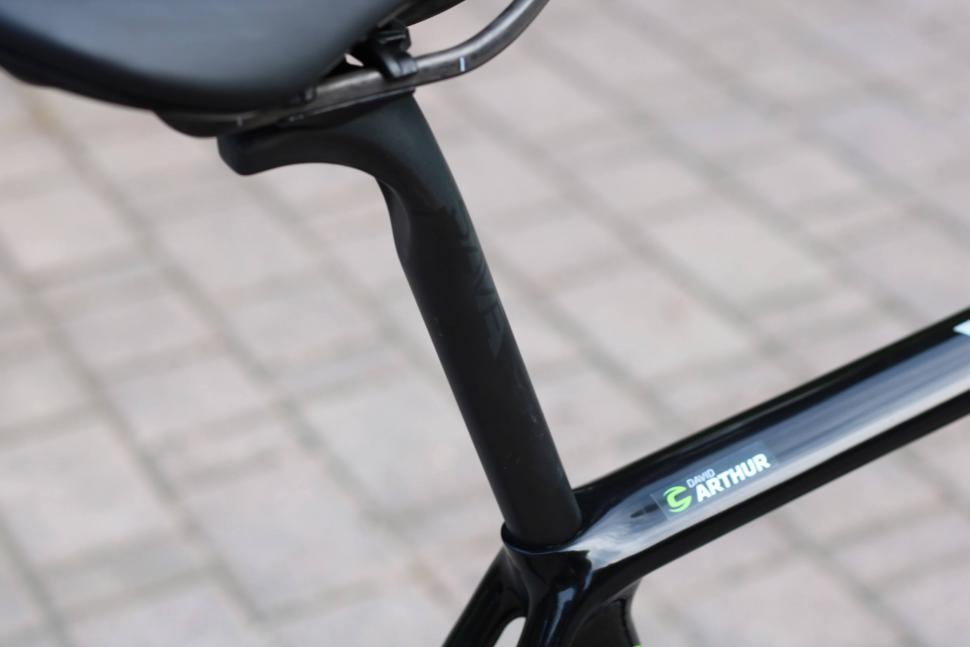 The seatpost retains the same skinny 25.4mm diameter of the previous Synapse, but it’s an all-new design using the company’s SAVE tech. It’s intended to help soak up vibrations and road chatter and provide more seated comfort when you’re 5 hours into a ride. Cannondale is claiming a whopping 36% extra deflection compared to non-SAVE posts with no weight penalty. The seat clamp is hidden inside the top tube, accessed from underneath, and that allows more seatpost to be extended for extra available deflection.

When the previous Synapse launched it had tyre clearance for 28mm tyres, and we considered that wide at the time. You need to remember that four years ago wider tyres were really only just starting to win favour with road cyclists. The goalposts have moved a lot in the intervening years, and there’s a growing appetite for even wider tyres. 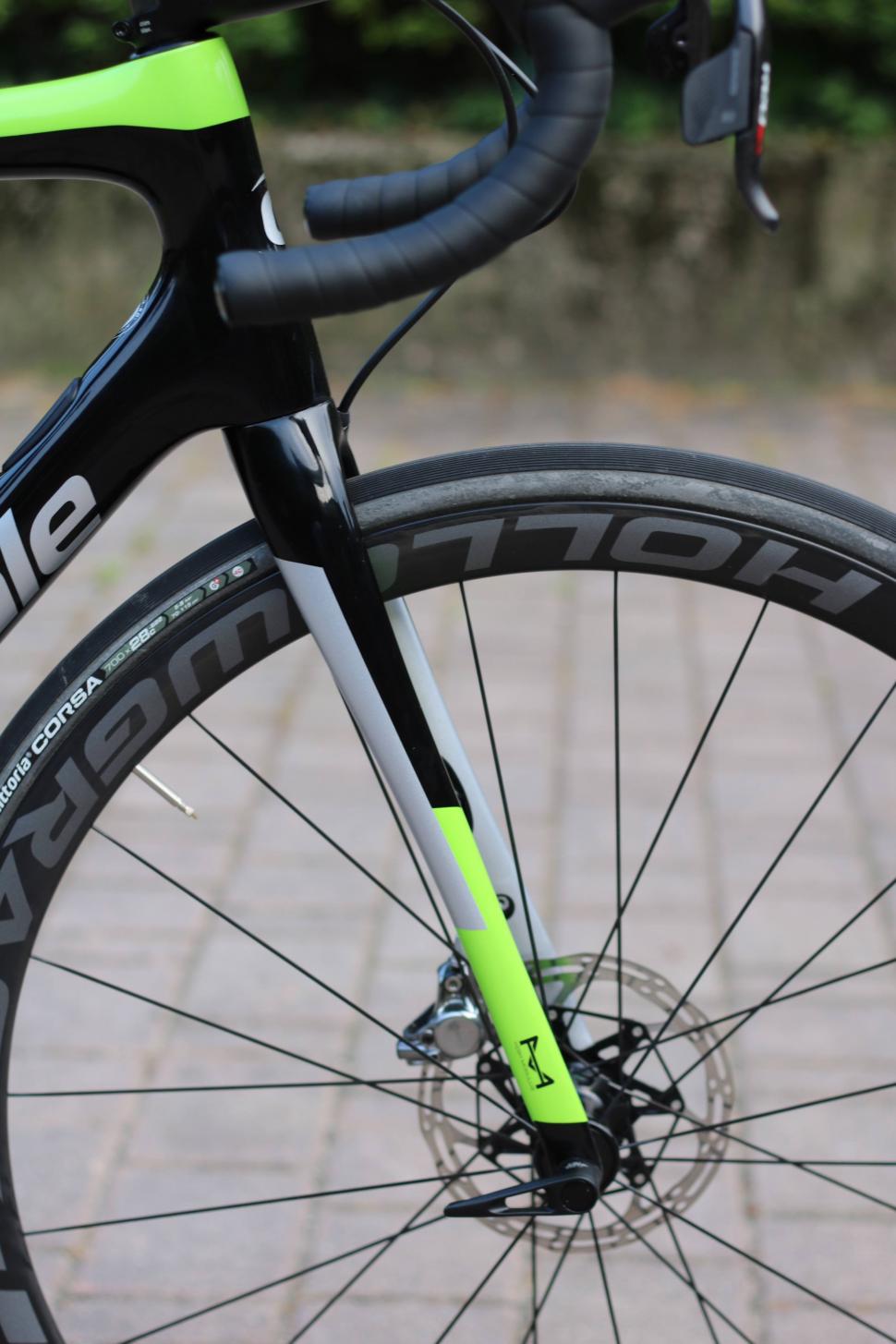 The new Synapse, in going all in with disc brakes, offers tyre clearance for up to 32mm tyres. That’s not to say the Synapse probably couldn’t go wider, bike manufacturers always err on the side of caution for legal reasons, and so we reckon, depending on tyre and rim combination, you could go wider. Bikes across the range will be specced with 28 and 30mm tyres.

Some of the newest endurance bikes that have launched in the last 12-18 months have been noticeable for their lack of mudguard mounts, and I’m thinking of the Specialized Roubaix and Canyon Endurace as prime examples here of bikes scoring an own goal when it comes to versatility.

Cannondale sees no reason why, considering the acres of tyre clearance and usefulness of mudguards for bad weather riding, that mudguards can't be an option. But it wanted to add the option without any unsightly mounts or eyelets, so the eyelets are hidden neatly at the frame dropouts and inside the fork blades, and there’s a neat removable seatstay bridge.

Cannondale’s heritage is in making race bikes so the stack is lower and reach and shorter than rival endurance bikes. It reckons the Synapse strikes the ideal balance between race bike aggressiveness and upright comfort. It’s also proud of the smooth stack and reach changes through the size range from smallest to tallest. There are some subtle geometry revisions. The head angle is a touch steeper, the wheelbase and head tube shorter, but the stack and reach figures are the same, 590mm and 386mm respectively.

Another key change is the improved cable routing. It’s fully internal and compatible with all current mechanical and electronic groupsets, with the main entry port on the top of the downtube. That's a similiar approach we're seeing on quite a few new road bikes at the moment, such as the Specialized Tarmac and BMC Teammachine. 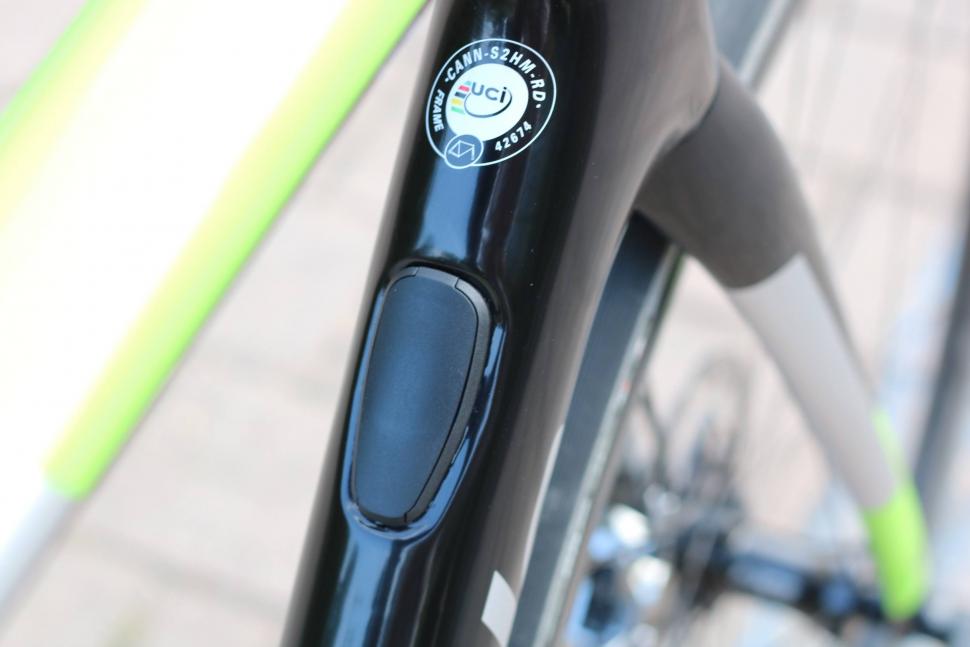 A choice of inserts can be used depending on the groupset, if using Shimano’s Di2 the junction box can be mounted in this port, much like on Pinarello’s Dogma F10 or BMC’s Teammachine SLR01.

Double chainsets, whether compact or standard, are still the main choice for road bike groupsets, but recognising the growing popularity of SRAM’s 1x11 drivetrain, which combines a single chainring with a wide-range cassette, Cannondale has made the front mech mount removable. So if you do ditch the front mech, you can also ditch the mount to clean up the appearance, and save a few grammes. 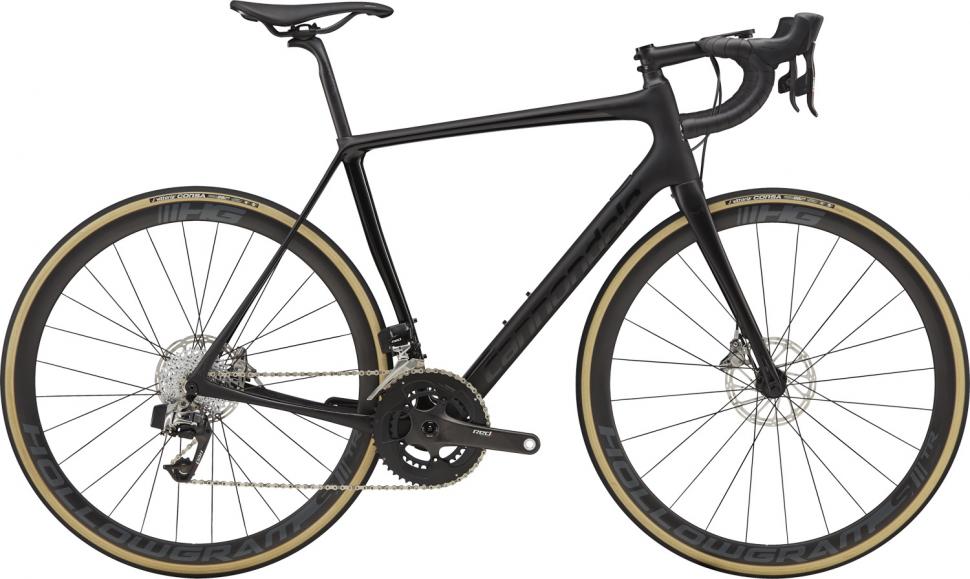 There will undoubtedly be an aluminium version along soon but we’ve not had any details on it.

Here’s the full range of bikes at launch:

Tune into road.cc tomorrow for a first ride report on the new Cannondale Synapse.