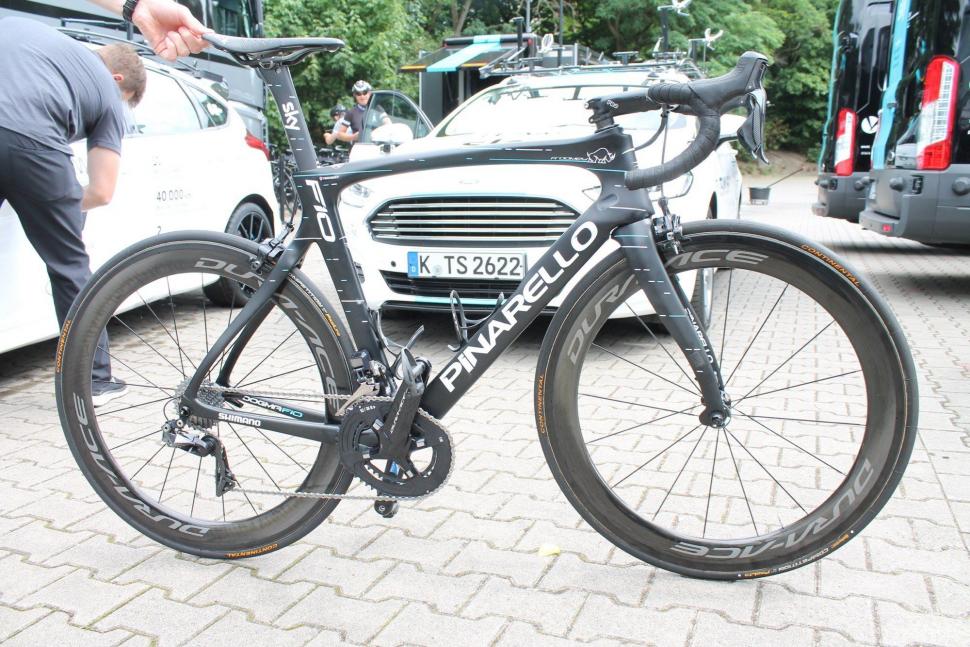 Tour Tech 2017: How Team Sky’s bikes have changed over the past 5 years

Five years is a long time in bike racing. Back in 2012 Team Sky won the Tour de France for the first time and Chris Froome is looking good to repeat the feat in 2017. We thought it would be interesting to compare the team’s bikes from five years ago to those raced today. In case you’ve forgotten, 2012 was the year that Bradley Wiggins (above) won the Tour de France, the first Briton ever to do so, aided and abetted by a certain Chris Froome who finished second overall. Wiggins won both individual time trials and Froome won Stage 7 to La Planche des Belles Filles.

Mark Cavendish was on Team Sky that season and won three stages in the Tour de France, including the final stage finishing on the Champs-Élysées. It was a big, big year for the team. 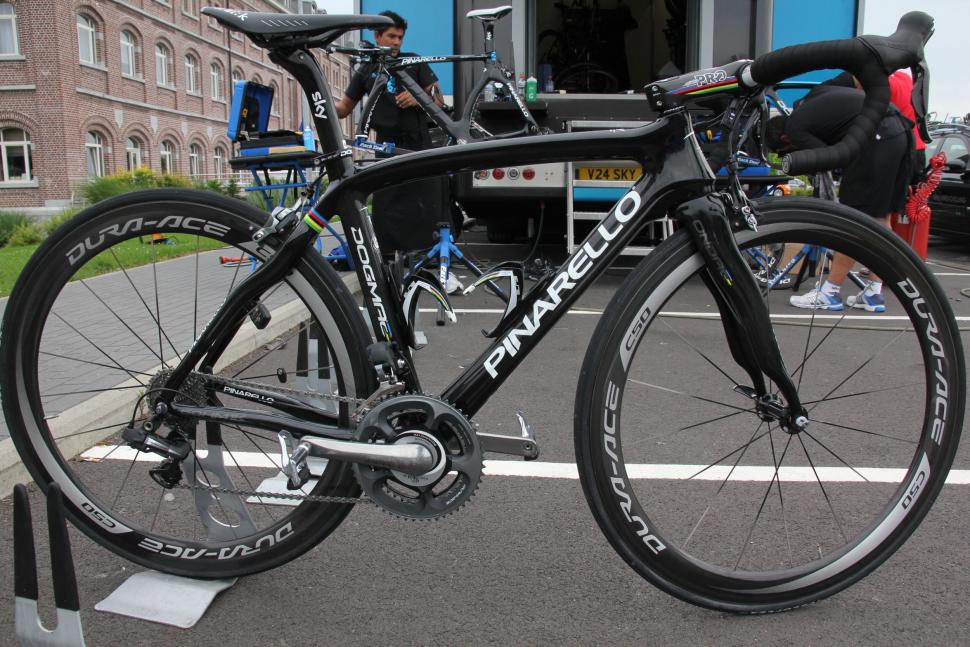 Team Sky were riding Pinarello Dogma 2s in 2012 (this is Cav's bike, above, and Wiggins' Dogma 2 below) with Wiggins racing the final stage on the Dogma 65.1, new at the time, made from stiffer type of carbon fibre. The Dogma 2 was Pinarello’s top line road machine with a frame made from Toray’s 60HM1K carbon.

The Onda fork was made from the same material, coming with a tapered 1 1/8in to 1 1/2in steerer for a little extra stiffness compared to a standard straight steerer. Team Sky are, of course, still using the Dogma but now it’s the F10 (this is Chris Froome's bike, above), Pinarello having been through the 65.1 and the F8 versions since 2012. It’s recognisably related to the Dogma 2 although the wavy chainstays, seatstays and fork legs (below), said to have improved the ride damping for increased comfort, have been toned down considerably. There’s still a bit of wiggliness (it’s a technical term!) going on there but today’s Dogma isn’t as far out there as a love it or hate it design. Pinarello has stuck with an Italian threaded bottom bracket too (this is Wiggins' Dogma 2, above), whereas every other brand ridden in the pro peloton uses a pressed in BB these days. Many other frame features have been altered, though. The pro cycling world is now even more obsessed by aerodynamics than it was five years ago and you can easily identify features of the Dogma F10 designed to reduce drag. All of the frame tubes are slim and deep in profile, as are the fork legs and the seatpost, and the seatstays meet the seat tube quite low (above) to reduce the size of the frontal area and to manage airflow around the rear wheel.

Check out our review of the Pinarello Dogma F8, the version that came before the current F10. Pinarello claims that the aerodynamic drag of the F10 has been reduced by up to 20% from that of the previous generation F8 (largely thanks to a new down tube, above, borrowed from the Bolide time trial bike, that’s designed to shield the water bottles from the airflow) never mind compared to the Dogma 2.

As is usually the case, Pinarello says that it has made progress in terms of stiffness and lightness too. The F10 has a claimed weight of 820g for a raw 53cm model while the Dogma 2 was a comparatively portly 920g for a 54cm size. However, the complete bike must still weigh at least 6.8kg to meet the UCI's regulations.

Pinarello made the stays and down tube of the Dogma 2 asymmetric (the Dogma has been asymmetric since 2009) to take account of the higher forces on the driveside of the frame compared to the non-driveside.

The Dogma F10 is still asymmetric, the down tube having been shifted 2mm towards the right compared to the F8 in order to provide extra stiffness on that side.

Find out more about the Pinarello Dogma F10 here. Dura-Ace is now 11-speed whereas it was still 10-speed in 2012 and Di2 is far more customisable. The junction box is now hidden away in a compartment in the Dogma F10’s down tube (above) rather than out in the airflow. 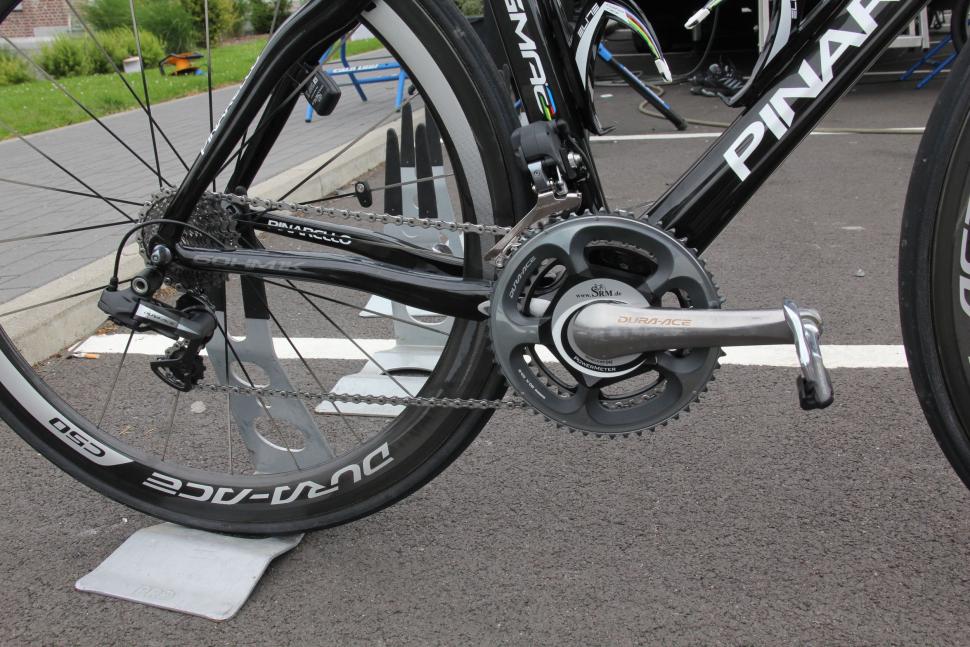 The chainset spider is now four arm rather than the five arm version (above) in order to save weight, and the spacing between those arms is uneven to keep the stiffness where it’s most needed. The crank arms, still aluminium, are also chunkier and asymmetric now, the idea being to add stiffness. This is Chris Froome's chainset, above, fitted with Osymetric non-round chainrings. Wiggins was also using Osymetric chainrings in 2012. 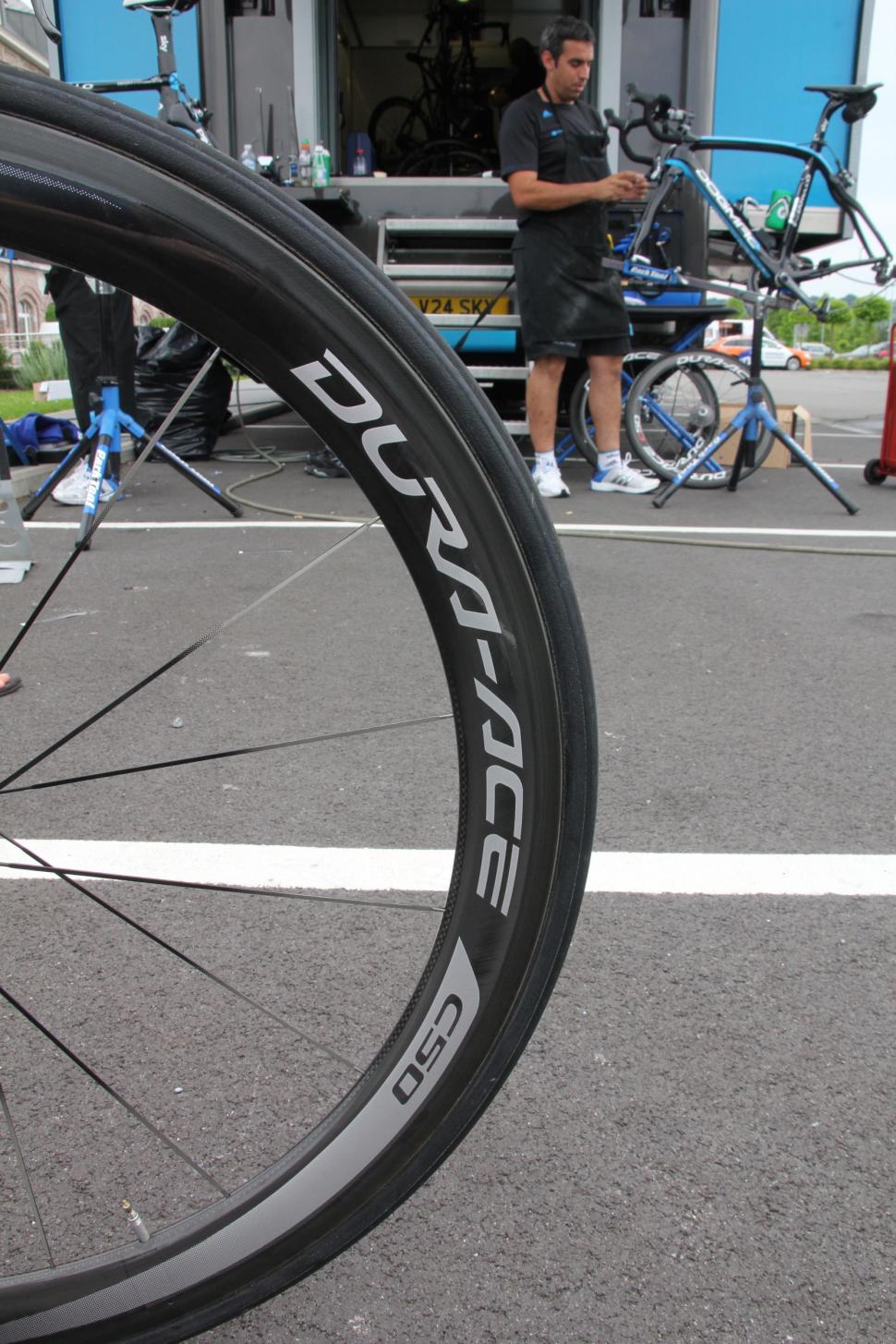 Shimano’s new wheels have also increased in width from 24mm to 28mm to work better with the wider tyres that most riders are using these days. Shimano claims that C60s are considerably more efficient than C50s in what it calls 'real world' conditions. Sky’s 2012 bikes were fitted with SRM power meters (this is Wiggins' chainset, above) but the team has been using Stages crank-based power meters since 2014. 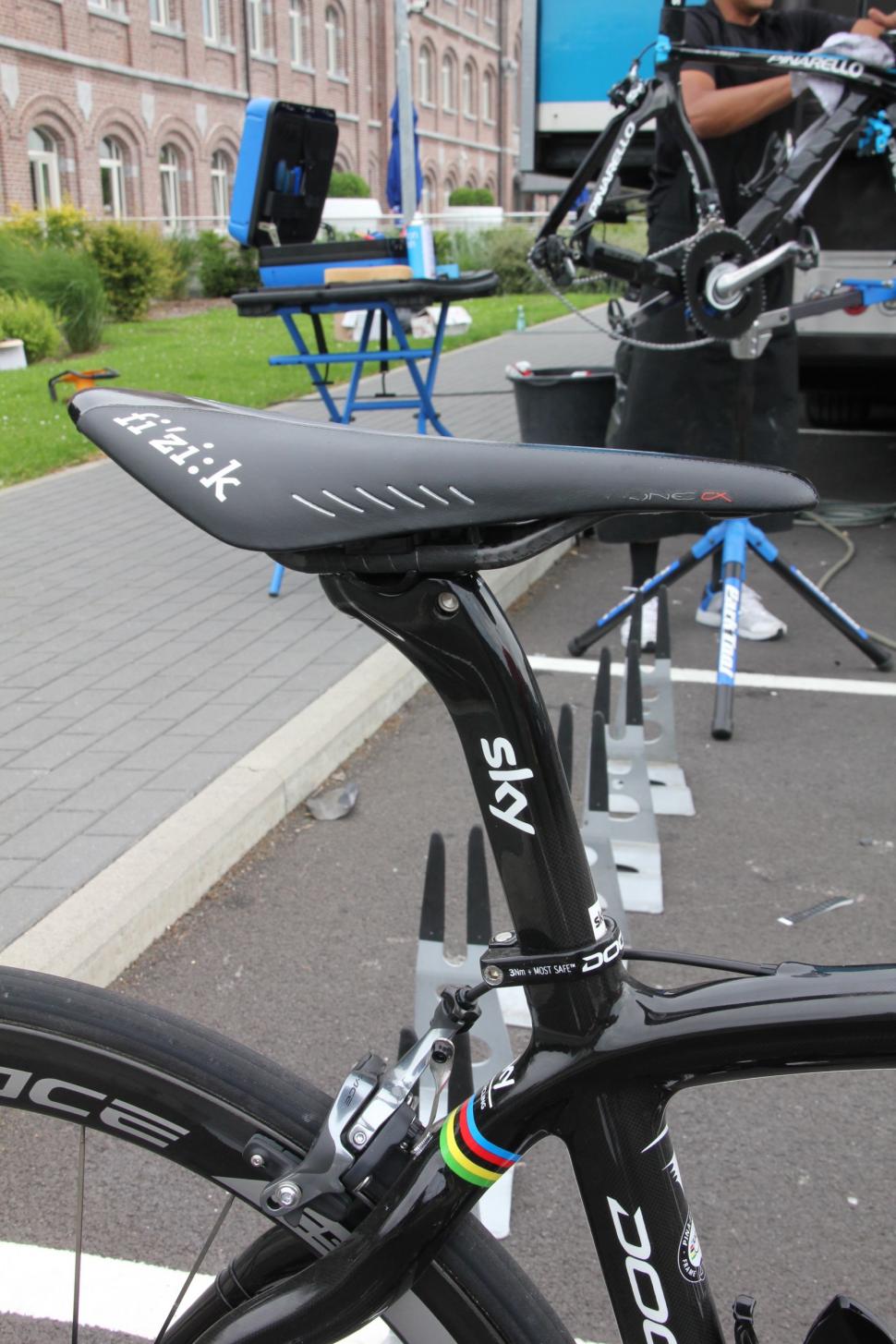 The Italian brand has changed the way its range is structured but some team riders still use carbon railed Ariones like Mark Cavendish's (above).

Overall, Team Sky's 2017 bikes have a lot in common with those of 2012, as you'd probably expect, but a lot has changed too, mostly because of manufacturers looking to reduce drag. With the importance of aerodynamic efficiency and the UCI unlikely to alter its 6.8kg minimum weight limit for bikes any time soon, you can expect brands to carry on focusing on this area into the future.

Will we ever see Team Sky racing on the disc version of the Pinarello F10 that was announced yesterday? We'll just have to wait to see how things develop in the pro peloton, but certainly not in this year's Tour de France.