The cyclocross season is, for some, looming large on the calendar and just in time for anyone thinking of buying a new cyclocross race bike, Canyon has just launched the brand new Inflite CF SLX. The new bike is designed to meet the needs of fast cyclocross racing with mountain bike-inspired geometry, huge mud clearance and a carbon frame that weighs a claimed 940g for a size medium. The original Inflite AL was first launched back in 2013 and represented the German company’s first move into the cyclocross market. It was pitched as primarily a cyclocross racer, but they also offered builds with slick tyres and mudguards to appeal to cyclists looking for a versatile commuter and winter training bike. It was also Canyon’s first disc-equipped bike.

The new Inflite CF SLX however is all about maximum performance and not about all-round versatility. It has, says Canyon, been designed to match the progression in modern cyclocross racing, which prompted the designers to create a “modern ‘cross bike to give racers the edge when lining up for the holeshot.” Quite. A key focus for the Canyon development team has been in ensuring the bike is easy to shoulder, with plenty of space in the front triangle, but maximising the amount of exposed seatpost to provide comfort-boosting deflection.

This has resulted in the striking design of the frame, which also has the added benefit of providing more comfortable shouldering due to the seatstays extended further forward on the top tube.

Canyon claims the result of this design and the lower seatpost clamp - hidden inside the frame - increases the effective bending length by 110mm for a 15% increase in vertical deflection. We presume that’s compared to the old Inflite. The downtube is also 1.5-degree steeper to create more space for putting your arm between it and the front wheel. And in case you’re wondering, it’s 100% UCI legal.

Moving to carbon fibre has allowed Canyon to provide a lower overall build weight, with a size medium frame weighing a claimed 940g and a frameset coming in at 1,300g, whilst also ramping up the stiffness that is needed for the sharp accelerations that is a key feature of cyclocross racing.

Mud clearance is a big consideration, with more of it better when the going is wet and sloppy. Not only has Canyon looked toncrease mud clearance around the rear stays and fork though, it has also sought to reduce the shelves and contours that can otherwise provide an opportunity for mud to build-up on the frame and add weight. Canyon likes numbers, and it claims the new Inflite CF SLX reduces mud build-up with 8.5% less surface area - that’s something we look forward to testing when we get our hands on a test bike. It has also tried to weatherproof the bike, sealing all the internally routed cable ports and covering bolts with rubber caps. 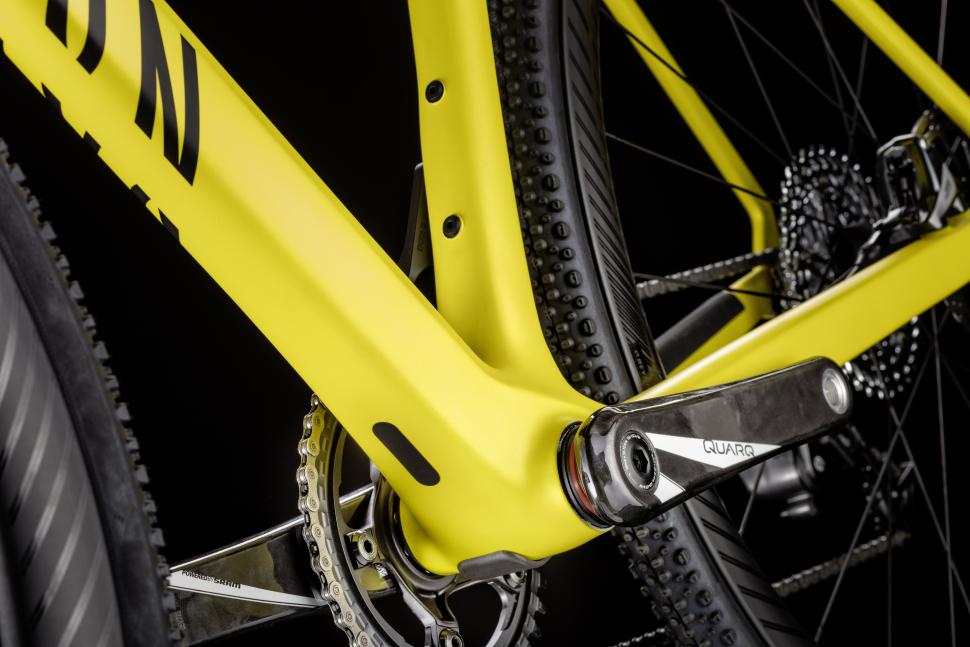 The frame will be compatible with 1x and 2x drivetrains, Canyon recognising there are many personal preferences when it comes to cyclocross racing and is keeping both camps happy. For bikes specced with a single chainring Canyon has developed a neat height adjustable chainguide that bolts to the redundant front mech mount, though with the security of clutch-style rear mechs and narrow-wide chainrings as good as it is, we’re not sure how necessary this is. But in the white heat of a cyclocross battle it could make a difference, and since it only weighs 13g it’s not going to slow you up much.

Canyon reckons that cyclocross race speeds are increasing, and that as a result it needed to look more closely at the geometry rather than replicate tried-and-tested numbers, and it has looked to the world of mountain bikes for inspiration. It has increased the wheelbase length and reach to increase high-speed stability, while shorter stems and wider bars provide the necessary agility, and a longer fork rake and 72.5-degree head angle is intended to provide fast and responsive handling.

The idea of increasing the reach and using shorter stems isn’t a new one, Whyte Bikes has been doing this for a number of years with its cyclocross models and we expect to see a few more brands going down this route as cyclocross, and to a lesser extent gravel and adventuring riding, evolves away from the traditional geometry of these once-modified road bikes. In a further sign of the high-performance ethos instilled into this new bike, Canyon has ported its one-piece H31 Ergocockpit carbon handlebar from its road models. Canyon claims it’s lighter and stiffer than a conventional handlebar and stem setup, and also provides some vibration damping qualities. It’s different to the road versions, being 24g lighter and 10% more vertically compliant, whilst built around the short stem and wide handlebar brief to match the longer geometry of the Inflite.

Canyon will be offering eight sizes from 3XS to 2XL, with the smallest two frame sizes built around 650b wheels. The geometry has also been tweaked on these two smallest sizes to maintain the desirable handling, with reduced trail, steeper headangle and a short wheelbase. We'll have more details on this new bike soon, in the meantime hit up www.canyon.com for more info.