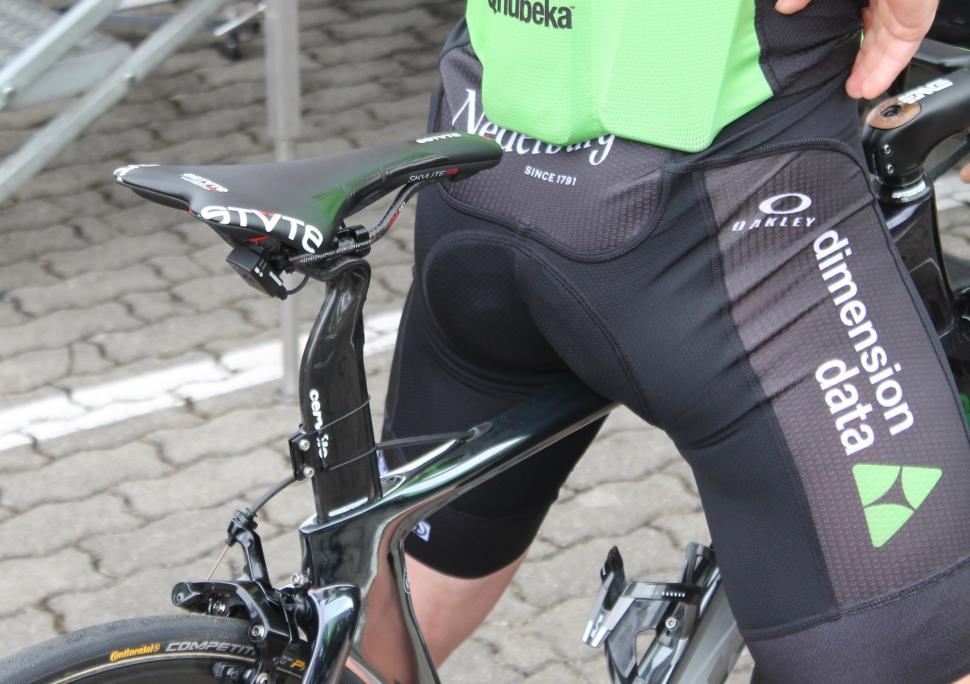 Check out what the Tour de France riders are sitting on to stay comfortable for over 2,000 miles
by Mat Brett

We all want a comfortable saddle but it’s even more important for the Tour de France riders who are going to cover 3,351km (2,082 miles) in this year’s race. Here’s a selection of those that we’ve seen. 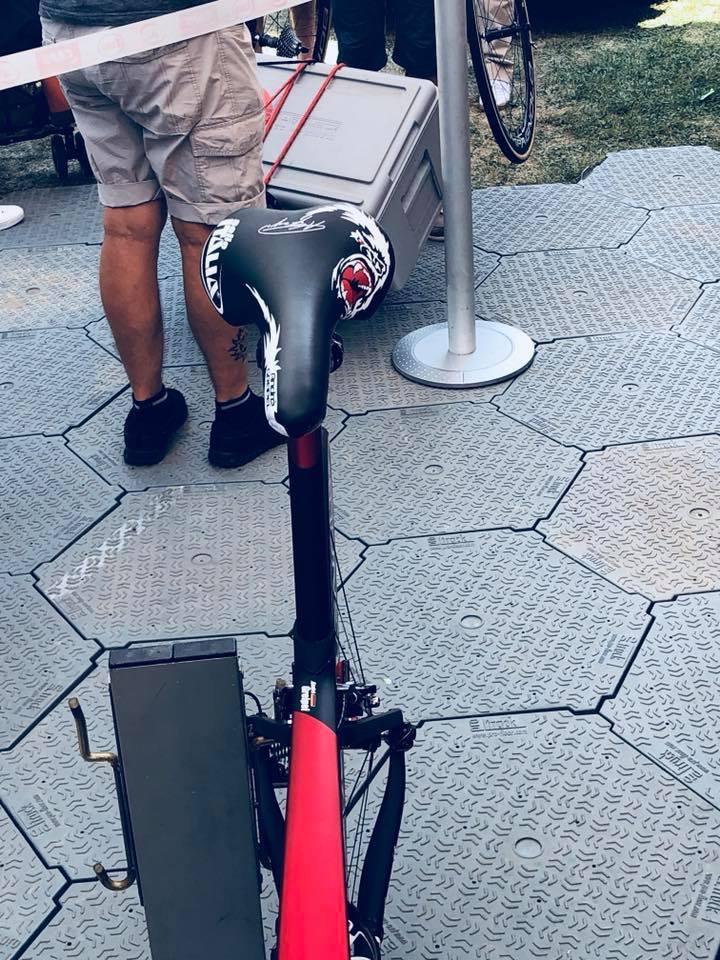 The design on Andre Greipel’s Selle Italia Turbomatic is a reference to his Gorilla nickname. 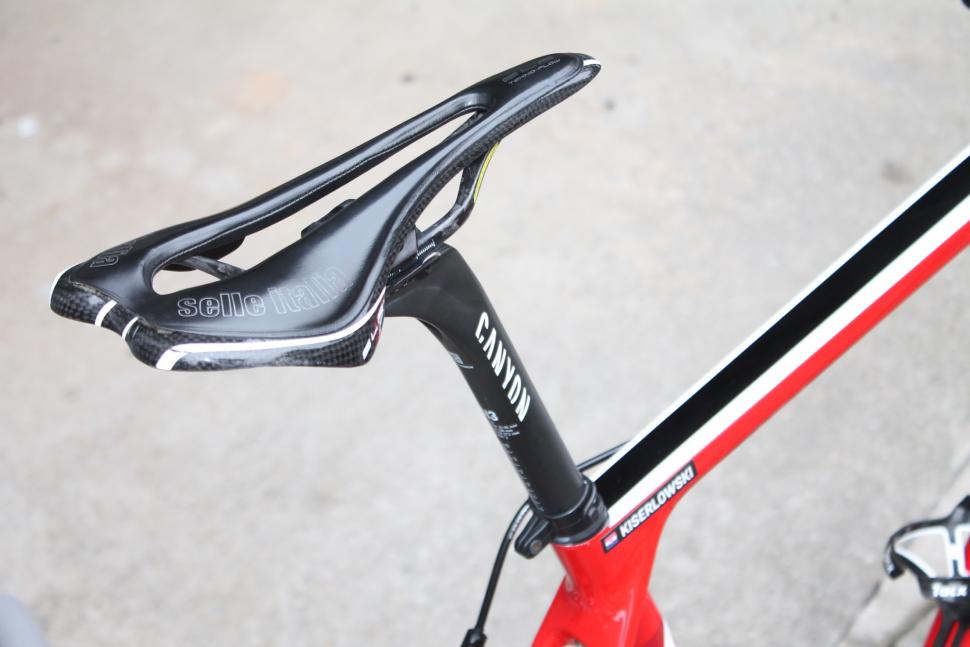 Katusha-Alpecin uses saddles from Selle Italia too – a huge array of them. Robert Kišerlovski goes for the Selle Italia SLR Tekno Flow with a huge cutaway in the centre. The claimed weight of this saddle is a superlight 110g – not entirely surprising given that there's a lot of fresh air going on there. 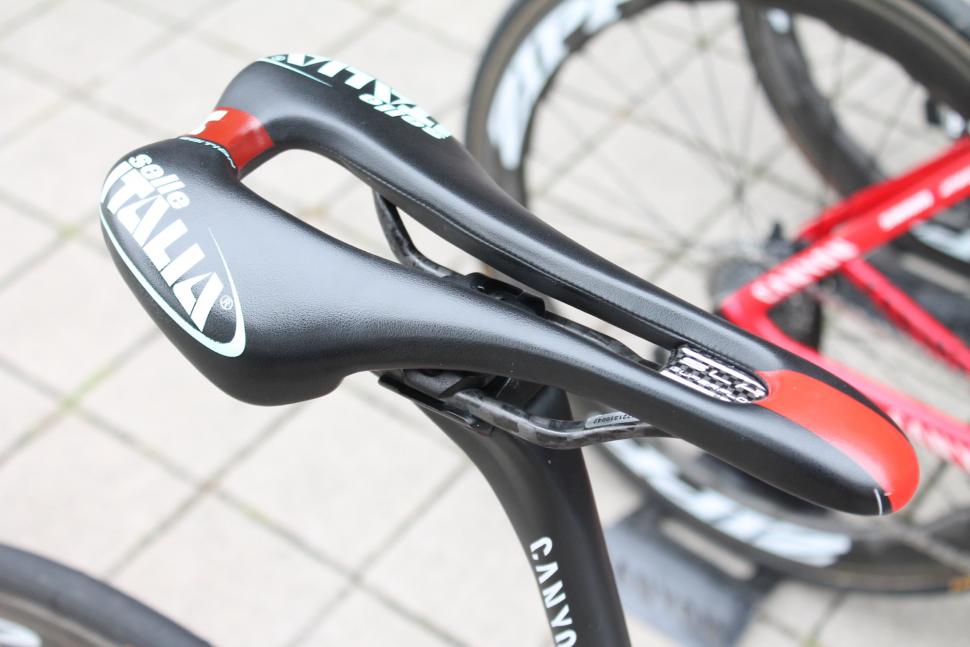 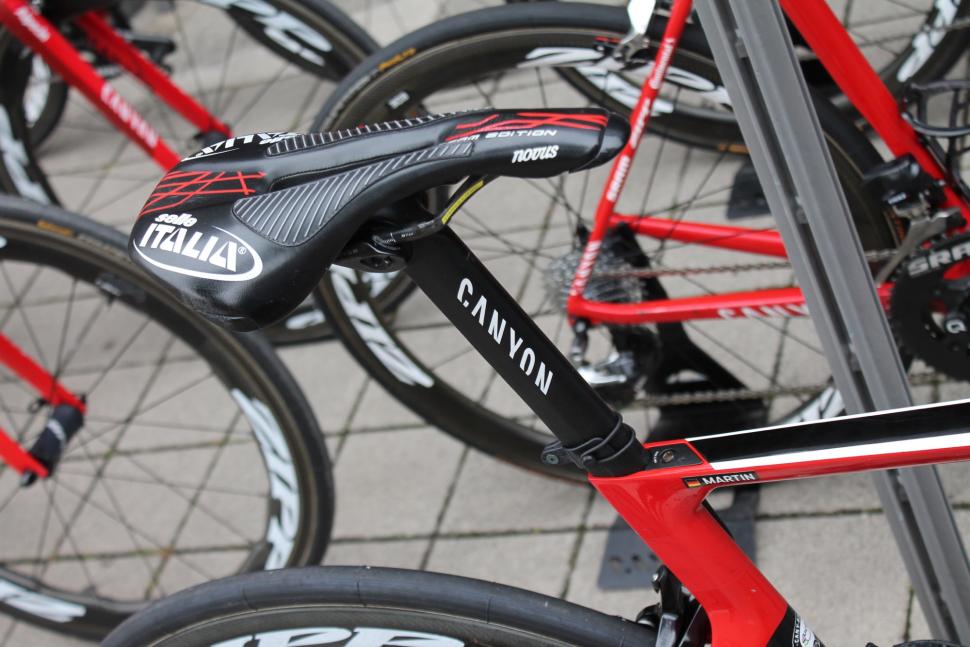 Tony Martin, who is now out of the race with a spinal fracture, was on a Novus Team Edition Flow. 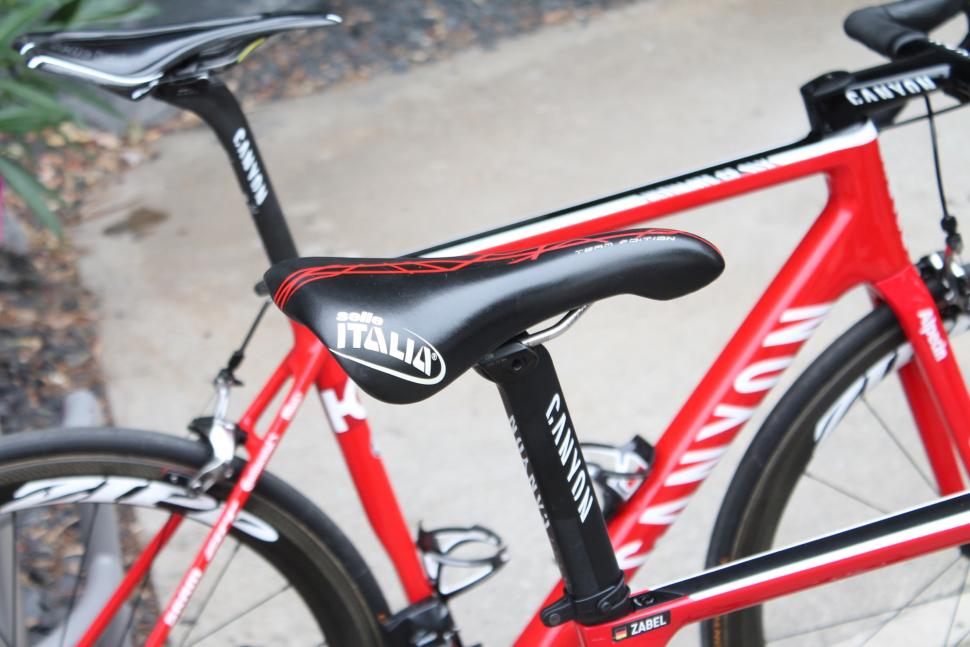 Rick Zabel prefers what looks like a Flite with titanium rails.

Over at Dimension Data, Mark Cavendish (now eliminated from the race) has a Skylite SR Pilarga saddle with carbon rails from Italy’s Astute. It’s a flat saddle with a twin shell – a U-shaped inner shell and a self-supporting outer shell that’s designed to absorb vibration. There’s triple density memory foam padding underneath the cover. 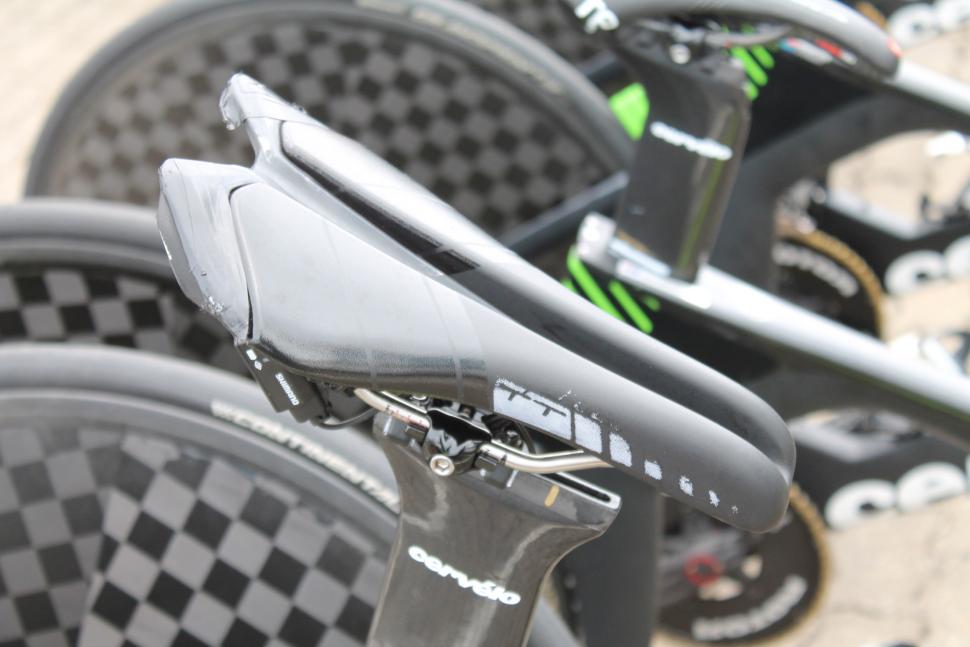 All of the Dimension Data riders are on Astute saddles for the time trials too, except Edvald Boasson Hagen who uses an old Pro Aerofuel. The graphics were blacked out but they’re clearly showing through again with wear.

It’s a similar situation for Bahrain-Merida’s Vincenzo Nibali. The team is sponsored by Prologo but the Italian rider has been using saddles from Fizik for many years and he continues to do so. This is an Antares 00 with braided carbon rails and a total absence of logos. 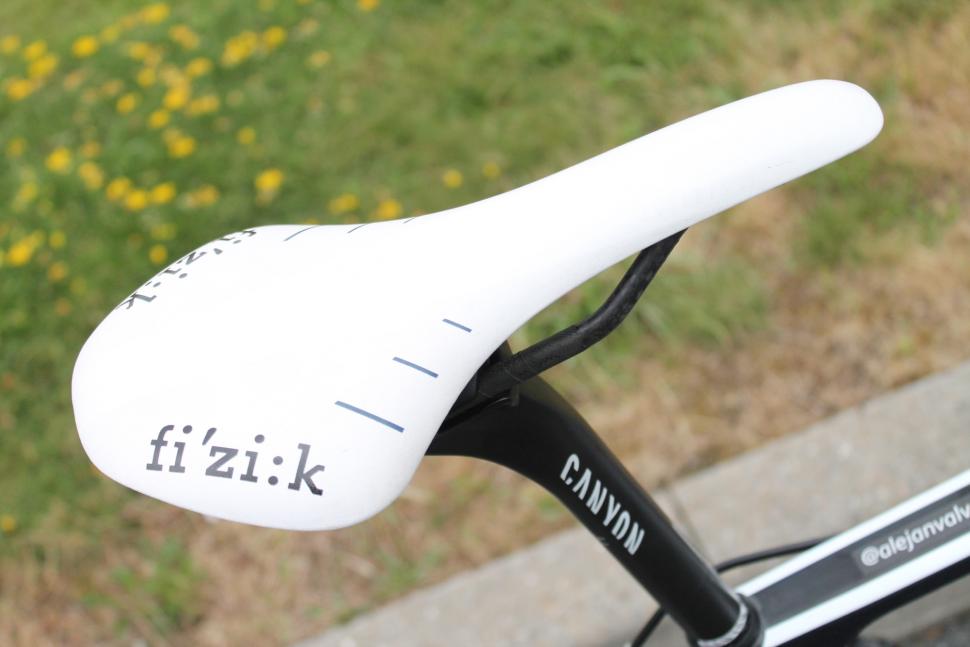 Movistar’s Alejandro Valverde uses a Fizik Antares saddle too, but this time with the full complement of logos.

Take a look at 10 of the best high-performance saddles. 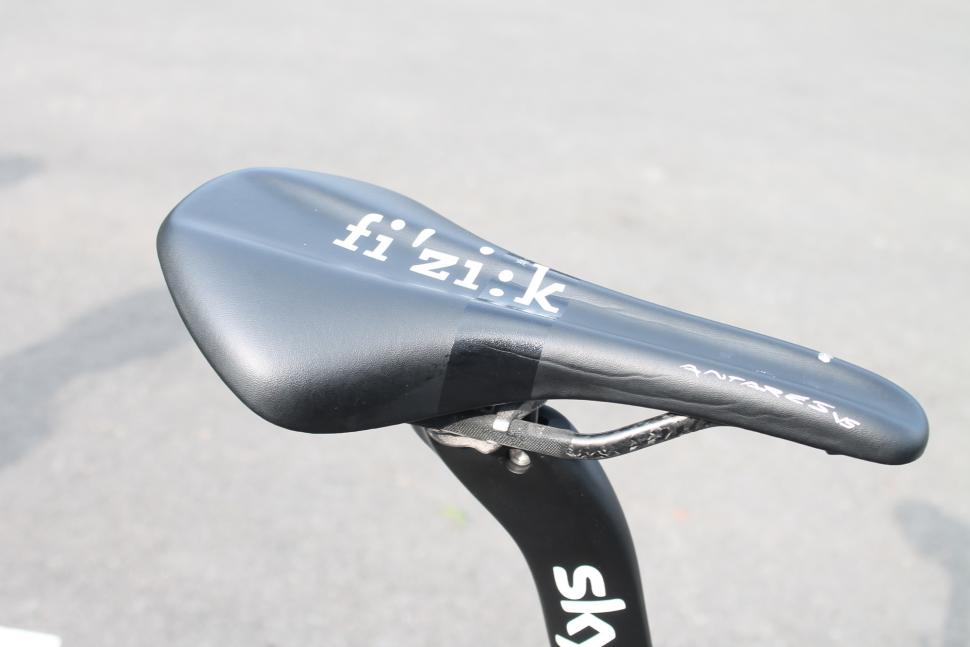 Team Sky’s Wout Poels is another Antares user, although he goes for the Antares Versus (not the current Versus Evo model) with a pressure relief channel running down the centre. A couple of white marks on the top help the mechanics position the saddle correctly. 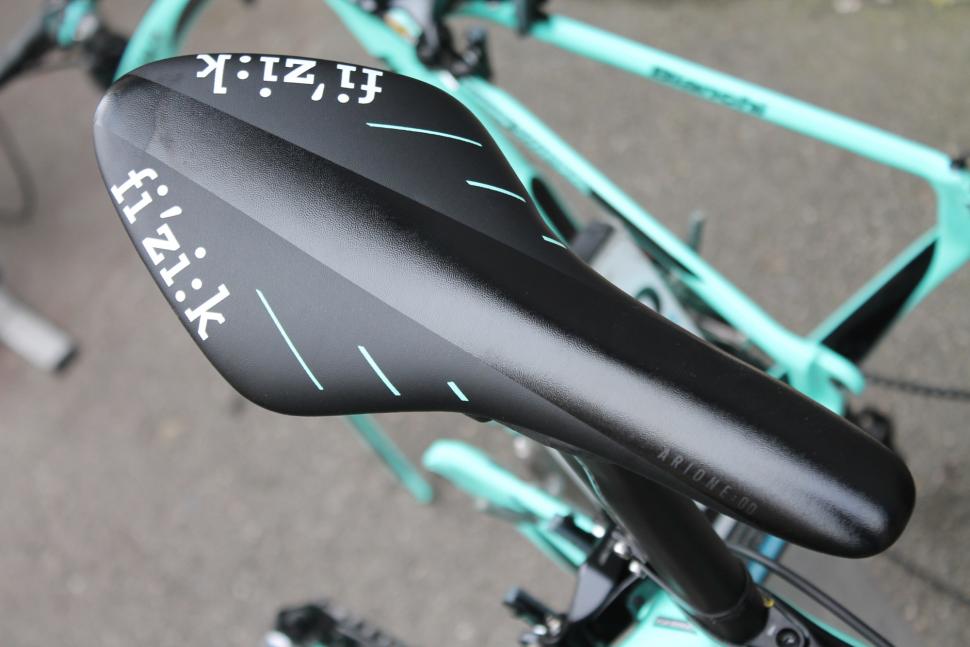 Check out our review of the Fizik Arione R1 saddle. 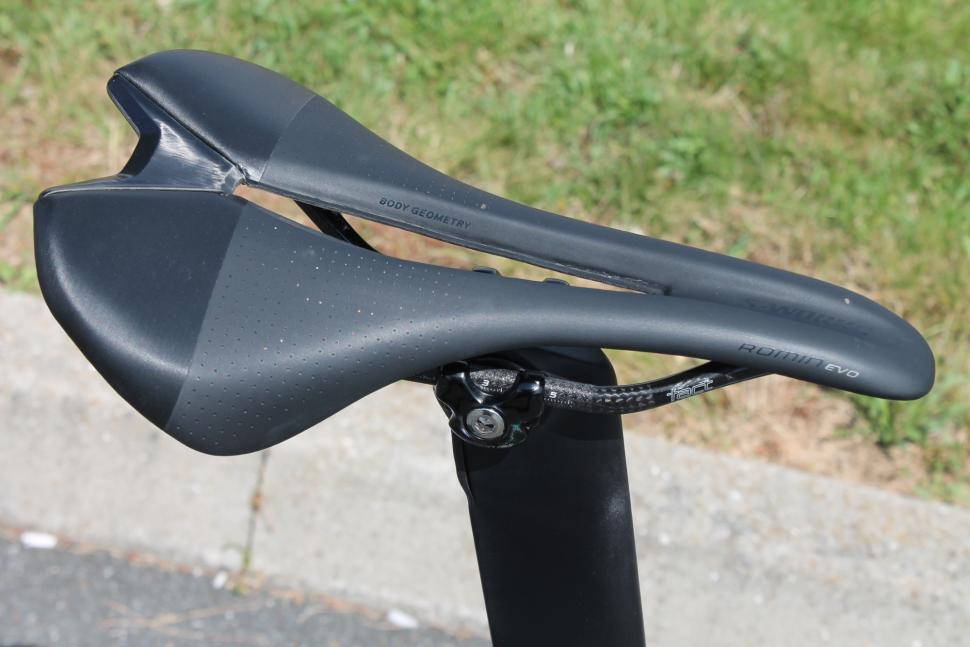 Unlike the rest of his bike, Peter Sagan’s saddle is understated with no personalised finish this year. He has a Specialized S-Works Romin Evo with the rails and shell made from carbon and a central channel that’s designed to maximise blood flow. It has a claimed weight of just 134g in a 143mm width.

Take a look at all of our saddle reviews.

Like Selle Italia, Fizik and Astute, Prologo is an Italian brand. It sponsors several World Tour Teams, including Bahrain-Merida. This looks like a Nago Evo with Nack carbon rails on Gorka Izagirre’s Merida Scultura. It features Prologo’s CPC surface of tiny upward-facing tubes. The idea is that this helps with grip, shock absorption and air cooling. Prologo also says that it enhances blood flow through a massaging action.

It’s a Scratch 2 CPC Airing Nack for Sep Vanmarcke of EF Education First–Drapac p/b Cannondale. Nack refers to the rails. According to Prologo, “It’s a nano structure carbon fibre that integrates Kevlar and aluminium fibres in order to provide a superlight rail with reduced deformations compared to standard carbon.” 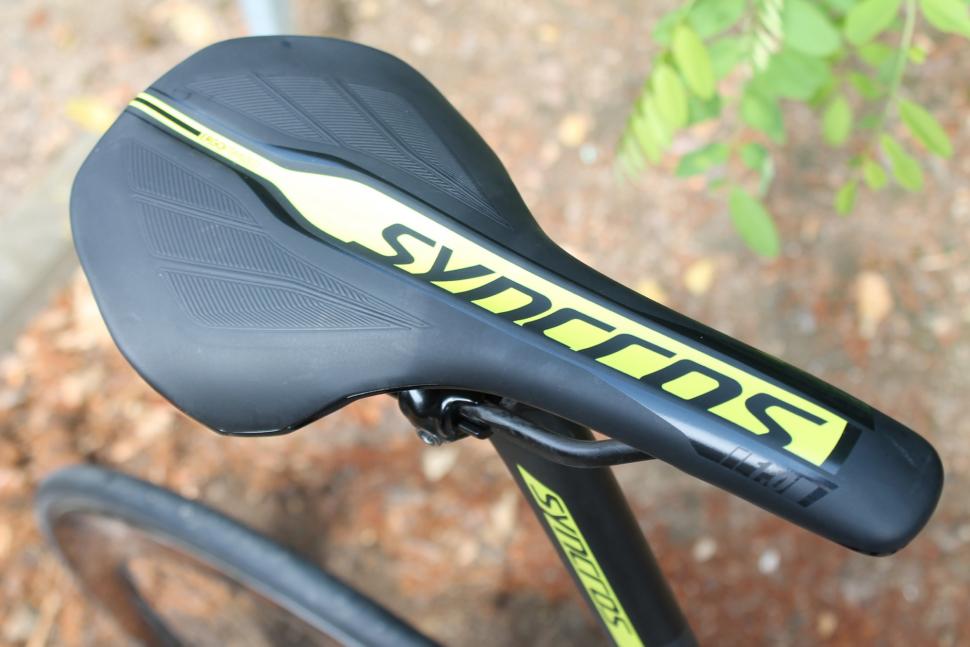 Mitchelton-Scott riders use saddles from Syncros, a brand that’s now owned by Scott. This is the FL 1.0 on Jack Bauer’s bike, with a carbon-fibre shell and rails. 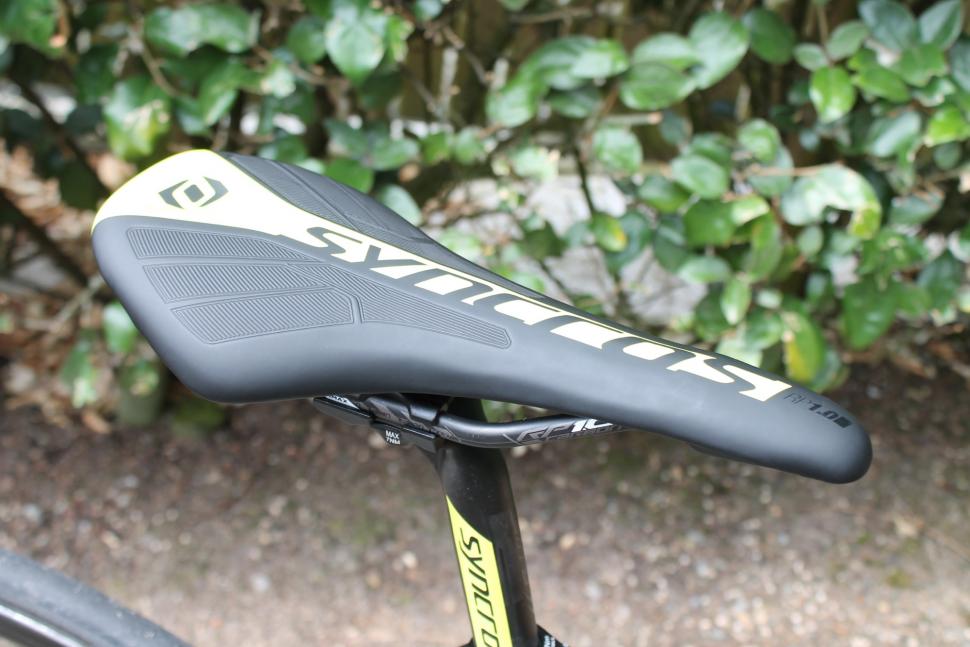 Teammate Adam Yates uses the RP1.0 which uses a carbon-reinforced nylon shell that features hexagonal holes, the idea being to allow some flex and pressure relief in certain areas without adding weight. The saddle has a claimed weight of 175g.