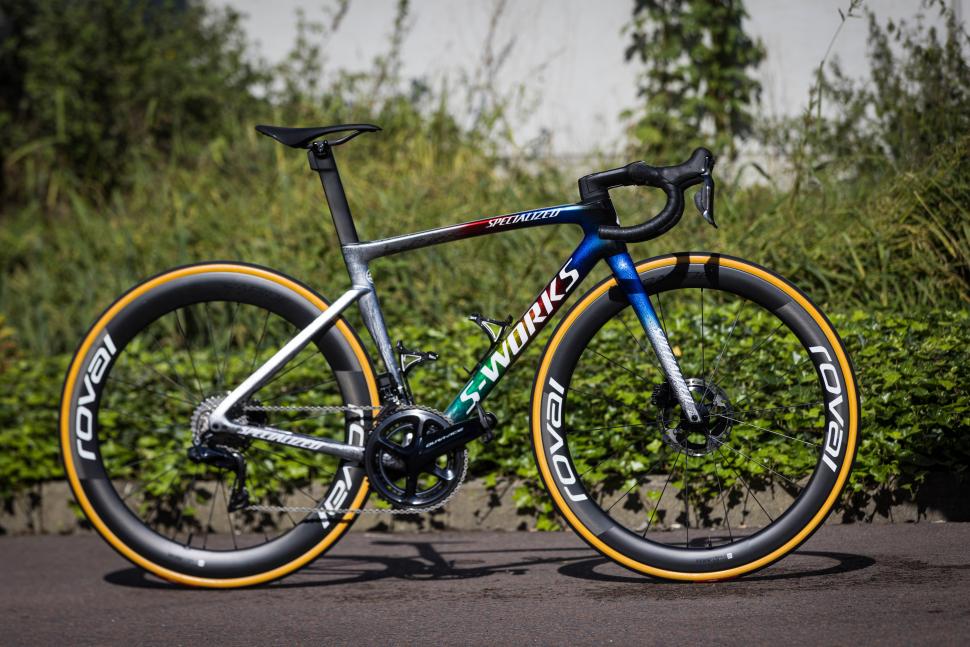 Check out the Frenchman’s new beautiful custom paintjob with a blurred design that’s inspired by the “swirling storm of competition”... but minus Shimano's latest groupset
by Anna Marie Hughes

Julian Alaphilippe is not only debuting his 2021 edition rainbow stripes at Milano-Torino today, he is also aboard a new custom World Championship Edition Specialized S-Works Tarmac SL7. 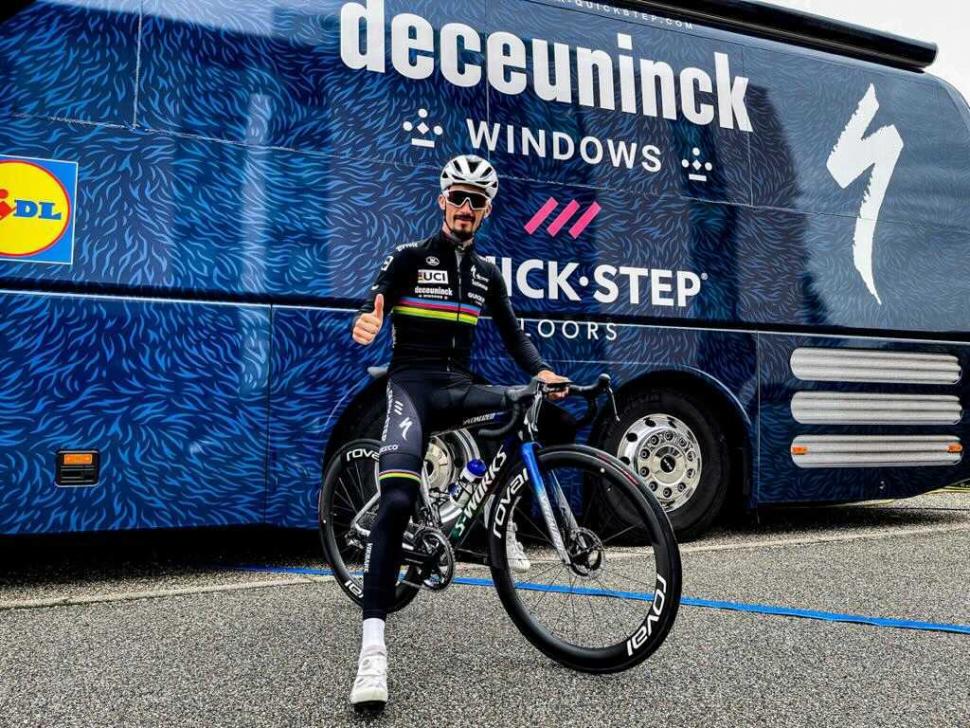 At the end of last month, the Frenchman defended his title in pure style in Leuven, Belgium, launching three blistering attacks with around 17km to go.

The current World Champion proved once again that he is one of cycling’s biggest showmen, and his bike of choice is this beautiful-looking custom S-Works Tarmac SL7 with a new design that’s inspired by the “swirling storm of competition”. 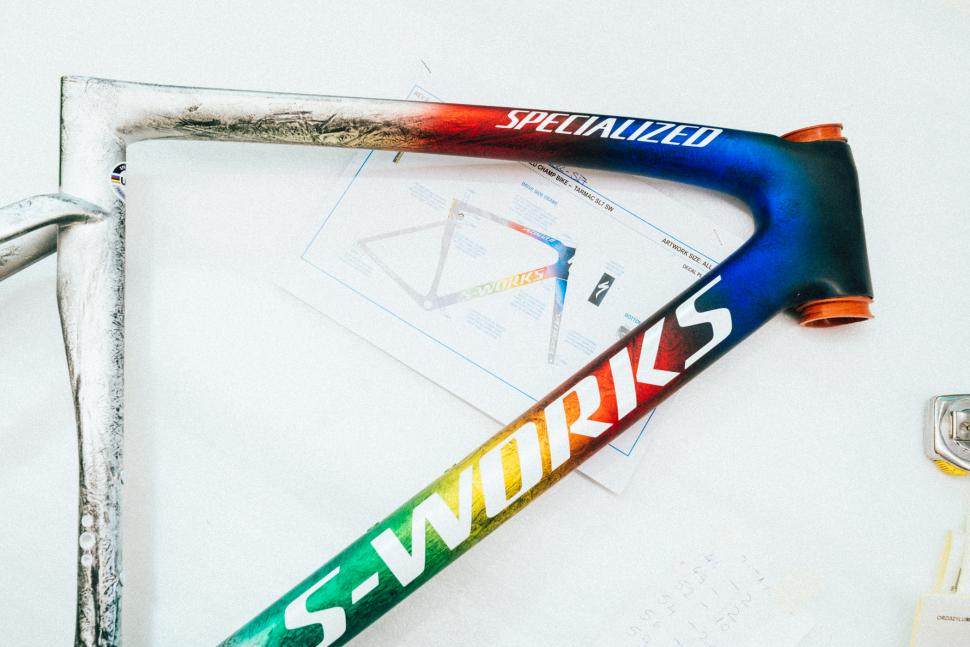 Specialized’s Senior Graphic Concept Designer Tom Briggs explains that the top tube graphics depict “that moment when all of the riders effort is being put into the pedals, their vision starts to blur and their eyes cross." 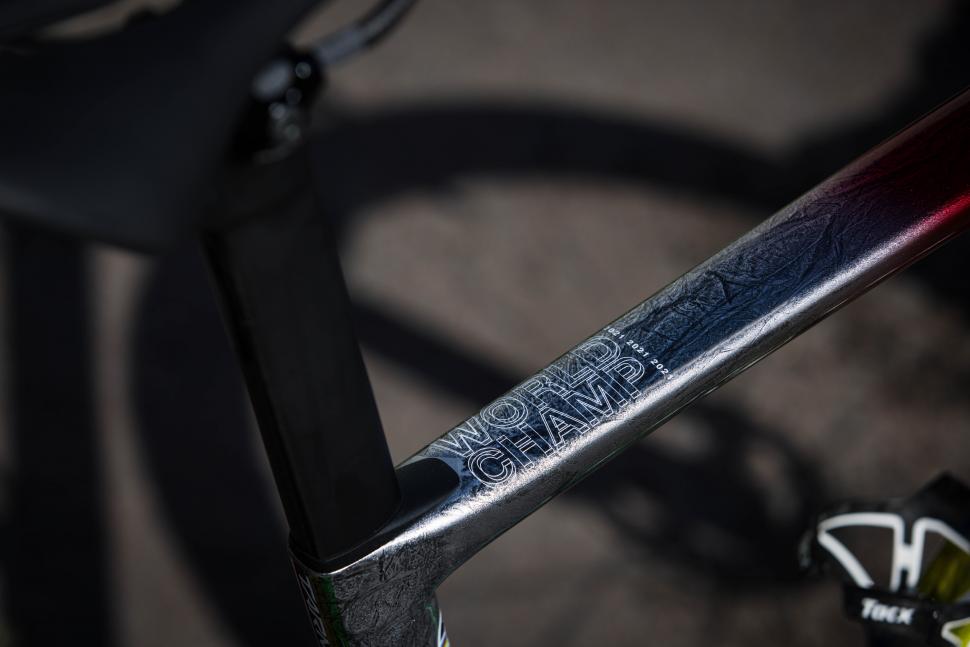 He adds: “If you look at the World Champ top tube logo it’s offset as though their vision was starting to see double and the world champion rainbow stripes are starting to blur on the downtube and headtube.

“The silver granite represents the swirling of thoughts, emotions, training and everything else that goes into that one singular moment of glory as they become the world champion.”

Alaphilippe and his Deceuninck-QuickStep teammates race aboard the S-Works Tarmac SL7, which Specialized launched back in 2020.

Marketing it as “one bike to rule them all”,  it certainly has ruled the elite world championships since it landed, having claimed three victories across the men’s and women’s events, with Anna van der Breggen’s triumph last year alongside Alaphilippe’s back-to-back wins.

Specialized claims the Tarmac SL7 is almost as aerodynamically efficient as its previous aero road bike, the Venge, while being at the UCI's minimum 6.8kg weight limit for racing. 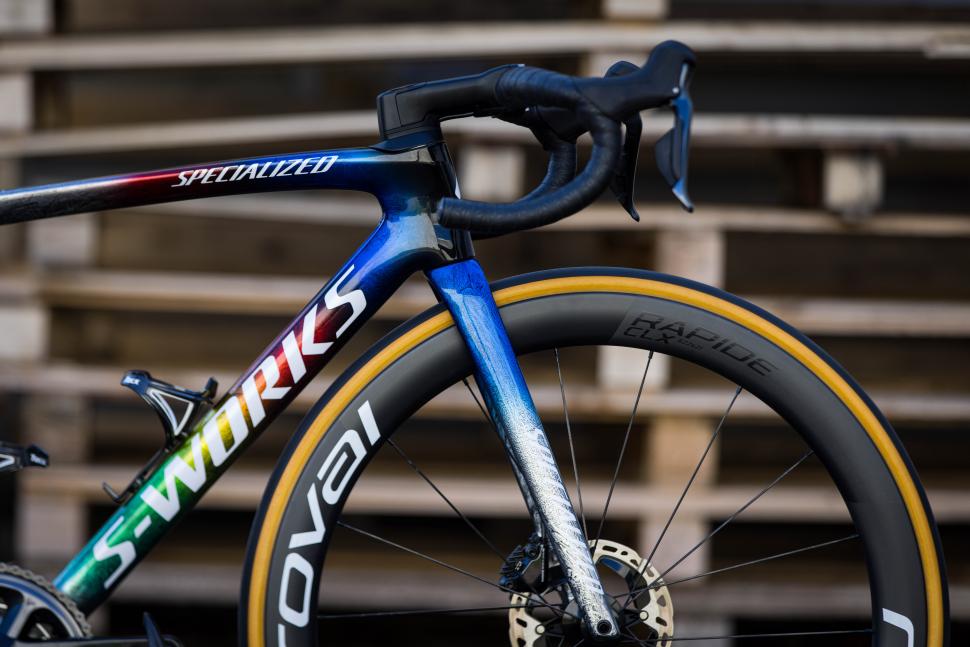 "By targeting the tubes that truly impact the aero performance of the frame, whether it's the seat tube, the seatstays, the head tube or the fork blades, all with shapes from our FreeFoil Shape Library [the collection of airfoil shapes that Specialized has developed], and then mating them with the fastest components that we have at our disposal and integrating the cabling, we created a package that is 45secs faster over 40km than the Tarmac SL6," said Specialized at the launch.

The World Champion can’t even get hold of the new Shimano Dura Ace Di2 groupset though, as you can see the bike is built up with the previous version. 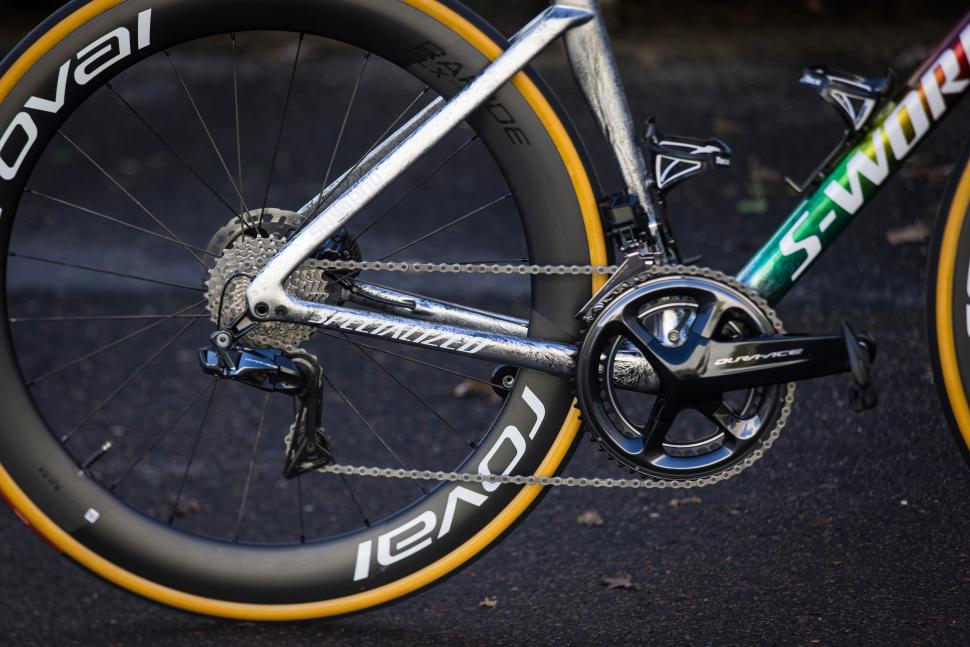 Wheels are from Roval and Alaphilippe goes between the lightweight Alpinist CLX for the hilly days and the Rapide CLX for flatter stage profiles - both of these are clincher wheelsets.

Saddle-wise it’s an S-Works Romin Evo, the pedals are Shimano Dura-Ace and bottle cages are supplied by Tacx.